Every week we abandon Brendan to the post-apocalyptic wastes of early access. This time, the cold, hard life of Next Day: Survival [official site]

I found my new friend sitting in a car outside the Safe Zone compound. The car was broken down and stationary, but he sat behind the wheel anyway. He was making his own speedy car noises and engine sounds.

I stepped in front of the immobile vehicle, wearing nothing but the boxer shorts and t-shirt that accompanied me into this world. I peered through the windshield to get a closer look at the man inside, pretending to drive.

“Oh shit!” he shouted “A pedestrian!”

He swerved to avoid me, making screechy-tyre sound effects and turning the car wheels impotently to one side even as the car itself went nowhere. Later, after we had become friends, Scion would insist to me that the car was a 1954 Monte Carlo, and try to sell it to me for five dollars – a transaction which is impossible according to the systems and mechanics of this slapdash survival game. But if it had been possible, I might have taken the deal. Even though the words hovering over the salesman’s head did read, in large crimson lettering: “[TRAITOR]”. 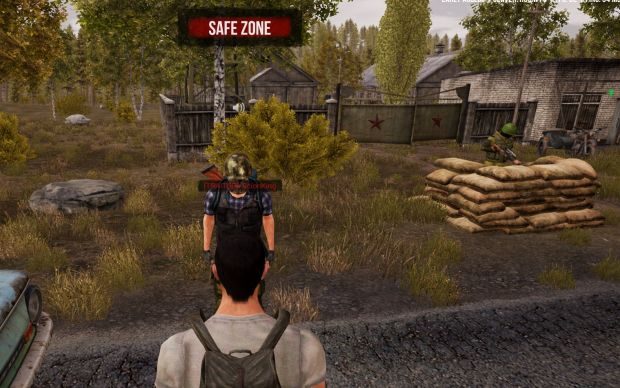 This is the type of multiplayer encounter you might have in Next Day: Survival, an open world shooter sticking firmly to the start-in-your-pants philosophy. You can probably guess its modus operandi from the muddy screenshots alone. Yeah, you’ll be looting tins of stew from abandoned homes. Yes, it’s set in an unspecified eastern European locale. Yes, you’ll have unsettling encounters with other players that often end with a bullet-shaped cavity appearing neatly in your forehead. The only unexpected thing is that there are no zombies. But there is toxic gas, and some radioactive bears. 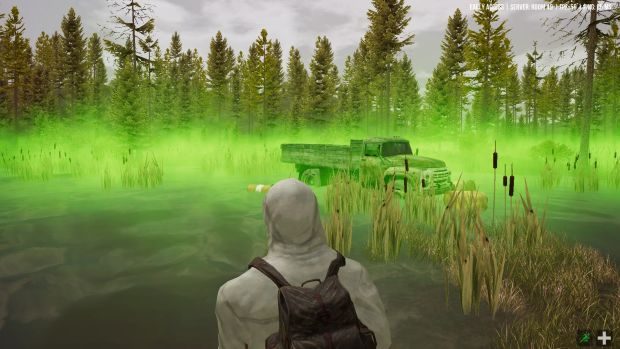 It’s more or less a zombieless DayZ (although it also has a PvE mode, in which only Stalker-like NPCs can kill players). There’s even a rough and ready faction system, which will be loosely familiar to those who played Bohemia’s sadism sim when it was still an Arma mod. There are “civilians” and “looters” and you basically pick a side after completing a few fetch quests from NPCs in the Safe Zone. This is a compound with steadily respawning resources and a handy well, carved out for thirsty new players. A useful place where your character can happily mime the act of drinking invisible water through a gas mask. 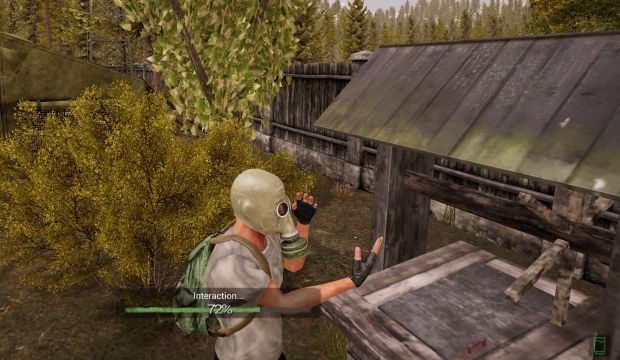 There’s also a storage guy here, who’ll keep your guns or trinkets safe if you want to “bank” them rather than risk taking them out on a foraging trip. 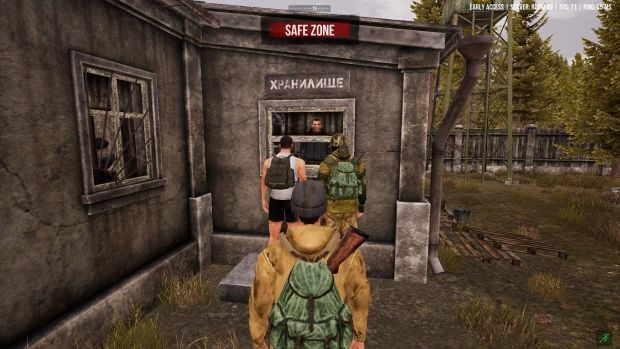 He also doubles as a shop, where you can buy and sell guns, gear and food for any currency earned via NPC quests. Stores like this also appear in other encampments run by civilians or looters found elsewhere on the map. These aren’t “safe zones” like the starting area, where bullets simply vanish after being fired, but they are relatively safe places for people belonging to that faction. Because if you kill one of your own, you are marked neither as a [CIVILIAN] or [LOOTER] but as a [TRAITOR]. And that’s bad. 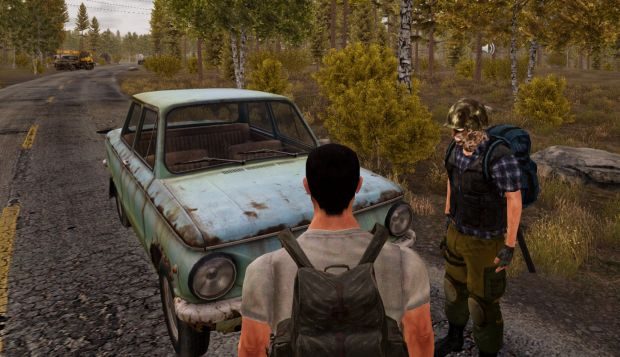 This is what happened to Scion, my new friend with the 1954 Monte Carlo. He told me how he was out in the woods with a neutral player (this is the label everyone starts with, until they choose a side) when another looter like himself began shooting his neutral friend. He returned fire and became marked as a Judas. After dying, he now appeared in the “asshole of nowhere” where he complained that he would usually die of the cold before reaching anywhere. I had already suffered the game’s version of hypothermia, and can confirm that the temperature system is extra punishing at night. Stay too long in the cold without proper clothing and you get the flu, hunching over and coughing loudly, unable to run as fast or as far as normal. Unless you pop some antibiotic pills and sit by a fire for a good amount of time, the cold can kill you. 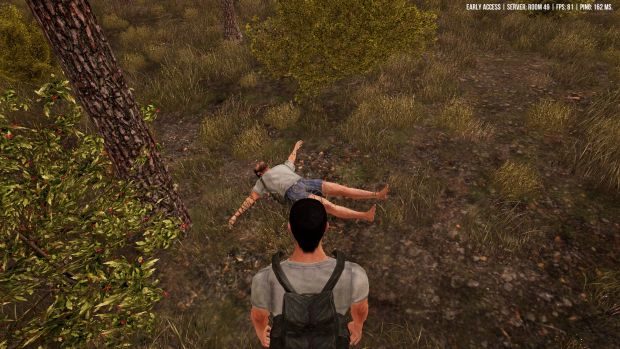 Scion must have innately understood this human need for warm clothing, because he told me to wait where I was and ran to the store room of the safe zone. He returned and dropped a bunch of objects at my bare feet - a jacket, trousers, shoes and (to my surprise) a fully loaded submachine gun. We spent some time after that considering the other vehicles of the area. A Harley Davidson motorcycle with a sidecar, a 1972 Volkswagen van (he said) which lay on the road, derelict and rusted beyond salvation. I wondered how I might make my way back to my encampment without these undriveable props. My only regret was that I wouldn’t be able to take my new pal with me. Because although the traitor penalty would disappear after a time, he would still be a looter. And although the game had bugged out and marked me as “neutral”, I belonged with my other friends in the civilians. 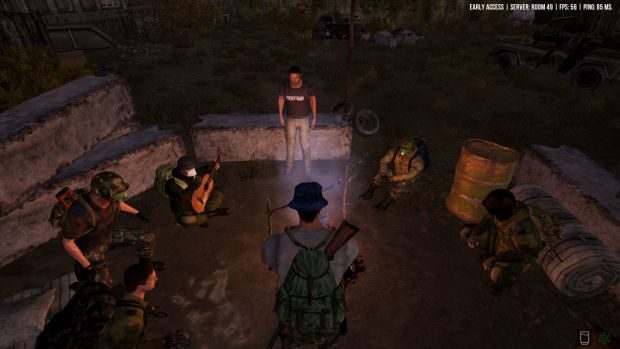 This is us around a campfire in one of the civvy camps. Some of these geared-up dudes are just NPCs. In particular, the guitar player, who plucked the strings at such an annoyingly high and unalterable volume that he was universally resented by all who sat there, warming themselves by the fire to stave off the hypothermia of the night. I would say something to Xander, a young player who had given me a pair of insulated camouflage trousers out of nothing but good will, and he would yell back: “I can’t hear you because of Bob Dylan over there.” There are only a couple of tunes all the guitar players of this world know how to play. In the real world, Xander's insult would have shut him up, but robot guitar players are famously bad at taking hints. He continued to strum the NPC equivalent of Wonderwall.

I walked toward a small pond of fresh water, where I could fill up a plastic bottle and take some refreshing sips before quickly retreating back to the warmth of the flames. I left the light of the camp behind and trounced downhill through the dark to the nearby watering hole. 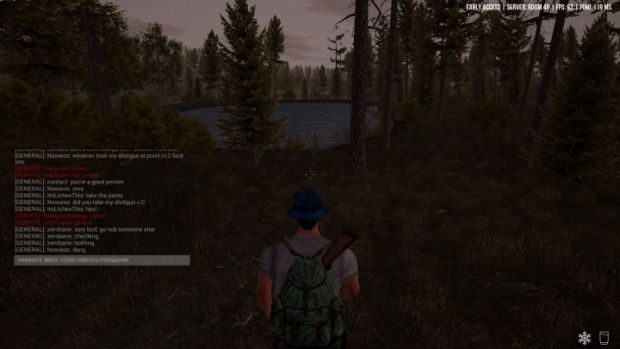 I hit the dirt. Looked up at the settlement. NPC guards ran past the watchtowers. I thought I could see a couple of the players from the fire moving among them.

“What happened, fire friends?” I typed, too far away now to speak directly through proximity chat.

A message came back. It was Xander.

“Someone punched the guitar guy,” he said, “and got shot.” 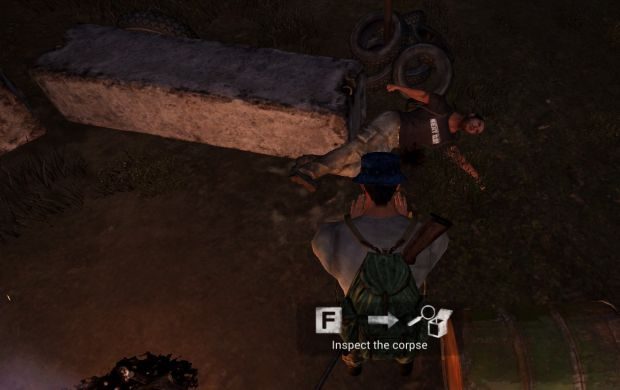 When I came back to the fire, the body of the player who had hit the guitarist was slumped beside a stone block. The NPCs ran around for a little bit more, clearly panicked and anxious about the whole ordeal, before finally returning to their usual patrols and idling. One of them sat back down at the fire and pulled out his guitar again. 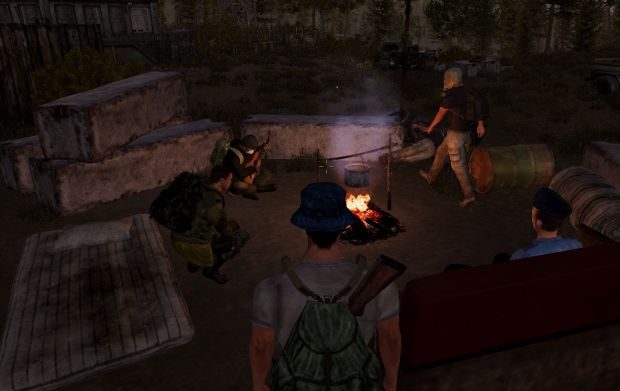 A helicopter flew overhead, against the moonlight. According to the game's feed it had dropped a humanitarian package somewhere – a container packed with supplies. The go-to violence catalyst for any survival game. 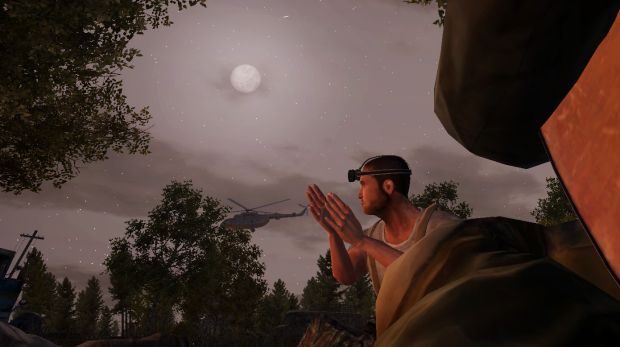 Xander said he was going to check it out. If I had been a braver player I would have gone with him. But instead I decided to use the drop as a distraction, along with the cover of night, to make a break for the Safe Zone, where I still needed to complete some dull quests to earn the glorious AK-47 all the cool kids were wearing on their backs. We said our goodbyes and I ran off into the cold. I’d be sick with the flu when I finally arrived in the safe zone but at least I had made it. Shortly afterwards, following a few deaths by toxic gas and wildlife (one of the quests involves entering a poisonous area in a hazmat suit and facing down a mutated bear) I stepped out onto the road and saw a man "driving" a car. 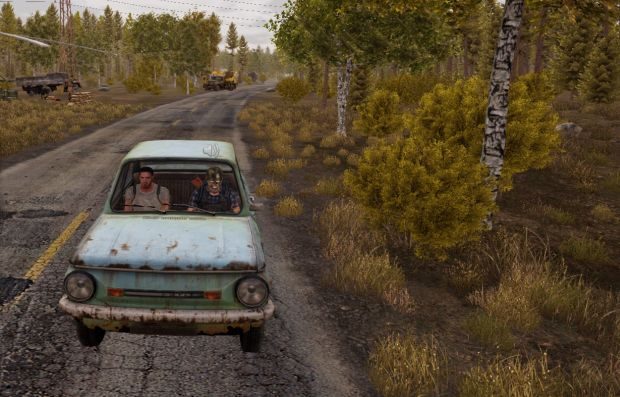 I must have been seeking some small connection to the English-speaking world that day, because after he swerved to avoid me, I immediately got into the passenger seat with Scion and started making car engine noises with him out of a sense of childish solidarity. After he gave me the clothes and a gun, we decided to fix up the old "Monte Carlo" and take her for a spin, our differing allegiances to looter and civilian be damned. But it turns out fixing vehicles takes a lot of work. You need a battery, spark plugs, fuel, ignition keys and a toolkit. The latter can be bought at exorbitant rates from the shopman but the rest we didn’t have, nor did we know exactly what components were missing and what were already installed. 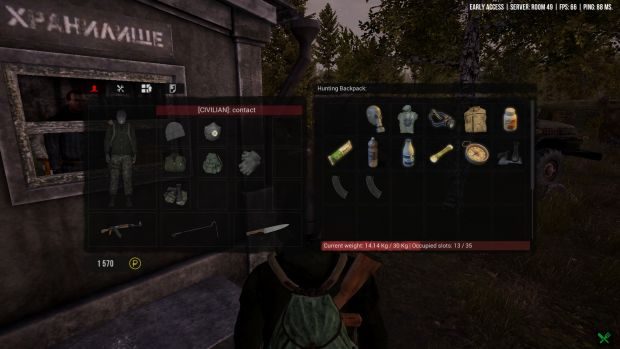 After buying a container from shopdude, I ran to a nearby petrol station, just outside the safe zone. There was nobody around. Filling up the jerry can takes time, like all other actions (eating, cooking meat, administering first aid). As the meter filled up, I looked around with a careful eye for any marauders. But it wasn’t until the can was full and I was on my way home that I saw the guy in a balaclava pointing his gun at me from across a patch of grass. His name read “The Man With The Plan.” I hid behind a bush, raised my rifle toward him and started shouting:

He sidestepped slowly, slowly, toward the tree line, never taking his iron sights off me, nor saying anything in return, until he finally vanished into the trees and I sprinted out of my own life-saving shrub and back toward the Monte Carlo. The fuel run had been a success.

Scion welcomed me back and showed me where to fill her up. Then we both hopped in to see if all was in working order. No such luck, the car remained immobile. We hopped out and wondered what was missing – most likely the spark plugs. We didn’t consider the other players, who were now gathering around us and talking trash while getting in and out of our car, to be any threat. This was the safe zone, after all. Until one of them clambered in and the car’s engine started up. 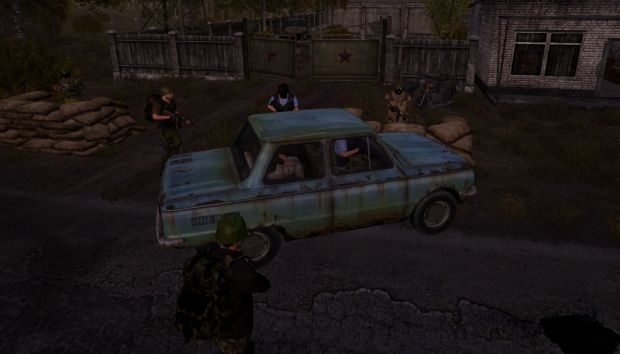 I looked at the guy in the driver’s seat. It was The Man With The Plan.

After a lengthy kerfuffle in which Scion, myself and a posse of other players dived in and out of the car’s passenger seats in an attempt to follow the thief wherever he planned to drive, he eventually got some speed in an otherwise empty vehicle and took off into the distance. 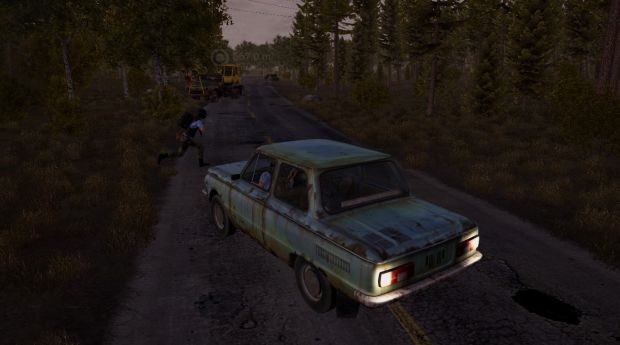 He ran over some people on the way, then briefly parked at the final turn in the road, maybe to see if anyone was following. Nobody was. The posse had melted back into the trees, like guerilla fighters, and Scion and I stood on the road and looked helplessly at the Monte Carlo in the distance, starting up again and finally rolling slowly out of sight.

“I think that guy just stole your car,” I said.

We went back to the safe zone and then decided to go kill some civilians.

Even tales like these can’t stop Next Day from being a re-hash of DayZ with a different map and a rudimentary faction system. But that doesn’t mean I didn’t enjoy my time with the civilians and looters of the world. I was just sad for Scion and I. Our dreams of an epic road trip, of building a friendship free of prejudice and expectation of a wider conflict, had suffered the fate of many an across-the-divide relationship. A life of freedom, taken from us by The Man.