Noita is how Spelunky looks in my dreams. It's a game in which the world is simulated down to each individual pixel, so that liquids drip, flow, splash and stain. You're tasked with travelling ever downward through a series of caverns, collecting new magical weapons and slaying beasties.

That wasn't always the case though. As I learned when I sat down with the developers at GDC, Noita was once more Dwarf Fortress than Spelunky, but changes had to be made when the wildlife kept drowning in pools of their own urine. Now, Noita is a real-time roguelite, and a beautiful cocktail of fire and fluids.

Before we get back to the piss-pools of Noita's past, let's cut to the chase. The current version of the game is pure joy. I can't stop myself from thinking about how clever it is, crunching all those pixels to make spectacle happen almost every time I trigger some terrible chain reaction. And the chain reactions don't just take place on one screen – one thing that has been held over from Noita's previous incarnation as a god game of sorts is simulation of a full world.

That world might have been reduced to mines and cave structures, but it still has an ecosystem of sorts. Creatures will sometimes fight and sometimes they'll set off chain reactions of their own by lobbing a fireball into a tunnel packed with gunpowder. Several times I heard a distant rumbling, the screen shook, and moments later I'd stumble across a cave dripping with blood and acidic guts.

Discovering the aftermath of an unfortunate event is almost as enjoyable as being the instigator of an unfortunate event. Noita's emergent environmental storytelling might be mostly painted in viscera of various colours and properties, and the stories themselves are only a sentence long at most, but there's a wonderful sense of discovery. And the blood drips so hypnotically, running down walls and forming puddles.

You can get your robes covered in the stuff and if you do, it makes you less likely to burst into flames.

There are other liquids too, many of which spray out of the wounds in monsters as you puncture them with your wands. One type of creature looks a bit like a floating testicle and every shot that lands on it causes slime to fizz out from the exact point of contact. It reminded me of shaking up a can of pop when I was a kid and then stabbing a tiny hole in the side – off-brand Coca-Cola cascading into the air.

Every liquid has its own properties. A lake of slime, or even the gobbets that our testicle friends produce, will slow you down and stick to your clothes. Wading through it is like wading through treacle. Oil burns, water douses flames and being damp is effective protection from fire. You can't jump into an inferno just because your robes are moist, but Noita's fire modelling is as detailed as its liquids so there are individual sparks that can ignite flammable materials. Shoot a lantern and when the glass shatters, flames will flicker out. They're not cosmetic; touch the right surface and they can become a catastrophe. It's unlikely, but it's possible. 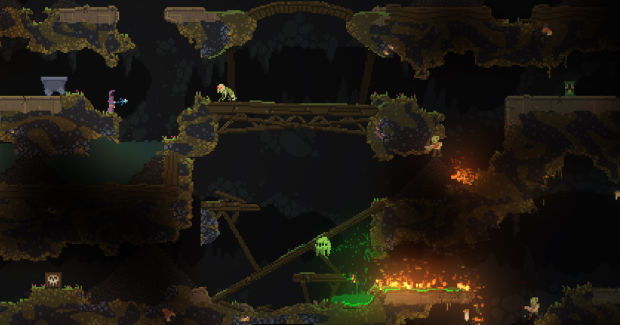 There's napalm too. And acid. Some creatures have acidic blood and I'd be furious if that wasn't the case. You might be wondering if oil will settle on top of water. It will and if you then set the oil on fire you'll have a burning lake. You could recreate all kinds of Biblical scenes.

In case this all sounds a bit too much like a scientific experiment, here's the first thing I did. I found a pool of glowing liquid, hovered above it (the robe-clad, disposable heroes effectively have magical jetpacks) and then blasted the bottom with my puny little wand. If this is science, it's the kind of science that leaves craters.

But not immediately. Fragments of dirt escaped into the water but the wand's fizzly projectiles didn't have enough power to break through the bottom of the pool and into the cavern below. So I did the sensible thing and wizard-farted back to a section of the mines where I'd seen an explosive crate earlier. Shooting the crate might cause it to explode before an explosion was necessary, so I had to use my presumably pointy shoes to punt the thing down a corridor and into the glowing goo. 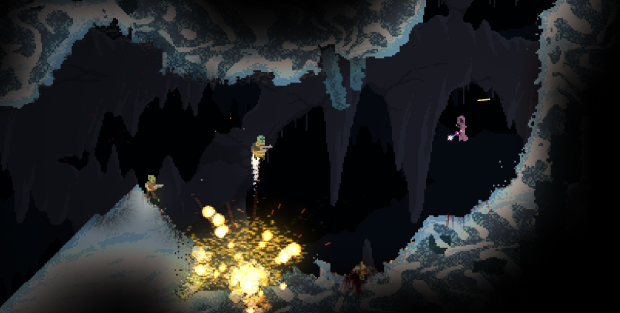 It settled to the bottom of the liquid and I zapped it from afar. The results were tremendous. Flames spread through the liquid, setting fire to the surrounding area, which was laden with wood and grass. The toxic goo, now burning as well as presumably radioactive, tumbled through the hole in the floor, igniting several bats as it went. They fluttered for a while, leaving trails of ash and fire, like scraps of disintegrating paper whipped away from a bonfire by a gust of wind.

Then a rock, dislodged by the calamities I'd unleashed, landed on my head.

I had been alive for less than two minutes and I'd had a wonderful life of hilarious misadventure.

Survive for long enough and you'll discover treasure, potions and new wands. The wands are your only weapon type but they're more versatile than an entire arsenal of conventional weapons. Each has a mana charge and a number of slots into which spells can be dropped. Some have additional properties, such as shuffling the charges so they don't play out in sequence or firing off two blasts for every click (aiming is with the mouse or twin-stick style). 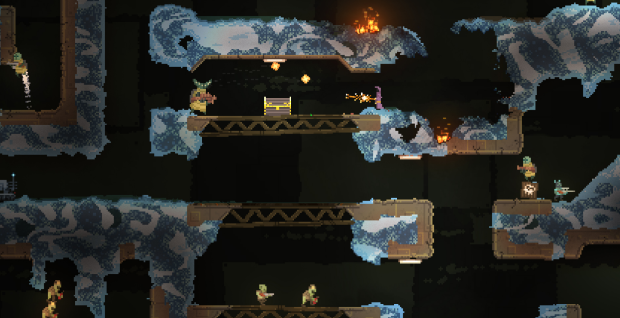 The starter wand is effectively a pistol, but rather than going through the standard assortment of shotgun, minigun, rocket launcher etc, Noita mixes things up by allowing customisation. The spells that you can switch into a wand's slots are found in other wands, so you might discover one that launches bombs, or that fires streams of napalm but alternates to creating magical rainclouds on every fourth shot.

At the end of a level you get the chance to remix your wands, and to buy new spells using the gold you've collected, so you could remove that raincloud and have a pure napalm wand. Or do what I did and find a wand with nine slots and throw random spells into all of them. There is joy to be found in not knowing if you'll douse that incoming monstrosity with lava or whether you'll simply cast a sphere of light so you can see your guts spilling out with greater clarity.

Before I return to the urine problem, as promised, I need to mention one final thing that shows the level of detail that Noita is working at. At one point, a stray spell hit a potion on a pedestal and the glass cracked, spilling some liquid. I assumed the potion was now an ex-potion but when I moved closer, the prompt to collect it appeared. It was an oil potion, handy to lob at a monster right before setting it alight. And that's what I did, but to no great result. One of the developers explained that there had only been a few drops of oil left in the bottle. Noita calculates spillage even on something as tiny and portable as a potion.

Now it's time to talk about wee. The pee problem arose when deer started to die out in the simulated world, and were eventually discovered in pools of their own liquid egesta. Simulated to seek out food and water, they were surviving just fine until the places they chose to live filled up with their secretions.

For every layer of simulation added, new possibilities opened up, and some of those possibilities were undesirable and would have required built-in course corrections and cheats in the simulation. And so Noita became what it is – a condensed but fully simulated environment where everything is true to the physical rules of the game.

It's still a toybox to an extent, like The Sandbox Evolution, but it's also a tight game, with a clear goal (GO DOWN) and precise controls. That it started life as a god game of sorts makes perfect sense, but so does the decision to cut away everything except this fantastic core. I used Spelunky as my initial reference point but there's just as much of Pixeljunk Shooter and Broforce here. Noita very much has its own style though, and it's one of the best things I've played in a good while.