If you click on a link and make a purchase we may receive a small commission. Read our editorial policy.
Developer: No Code
Publisher: Devolver Digital

I can't think of another game that has so quickly made me care so much. I'm staring at Emma Fisher, adrift in zero gravity after (another) unknown calamity has buckled our space station and briefly disabled my camera feed. I'm looking at what might be a floating corpse, aghast at the idea that I'm responsible for it. She isn't moving. She isn't telling me what to do. In some ways, I'm more lost than she is.

Observation's obvious inspiration is 2001: A Space Odyssey, so let's get all our comparative ducks in a row, nice and early. It's set in the same sliver of time that fiction writers like to pretend is far enough away for certain critical technologies to develop, while the world still essentially resembles our own. We're sometime in the 2020's, someplace where we shouldn't be. The station's corridors and hubs resemble the ISS, or at least how everyone imagines the ISS, but bigger.

The future's technology is basically the same as ours, but with jazzier propulsion and AI that falls somewhere between Siri and the Star Trek computer. That's you, that is. 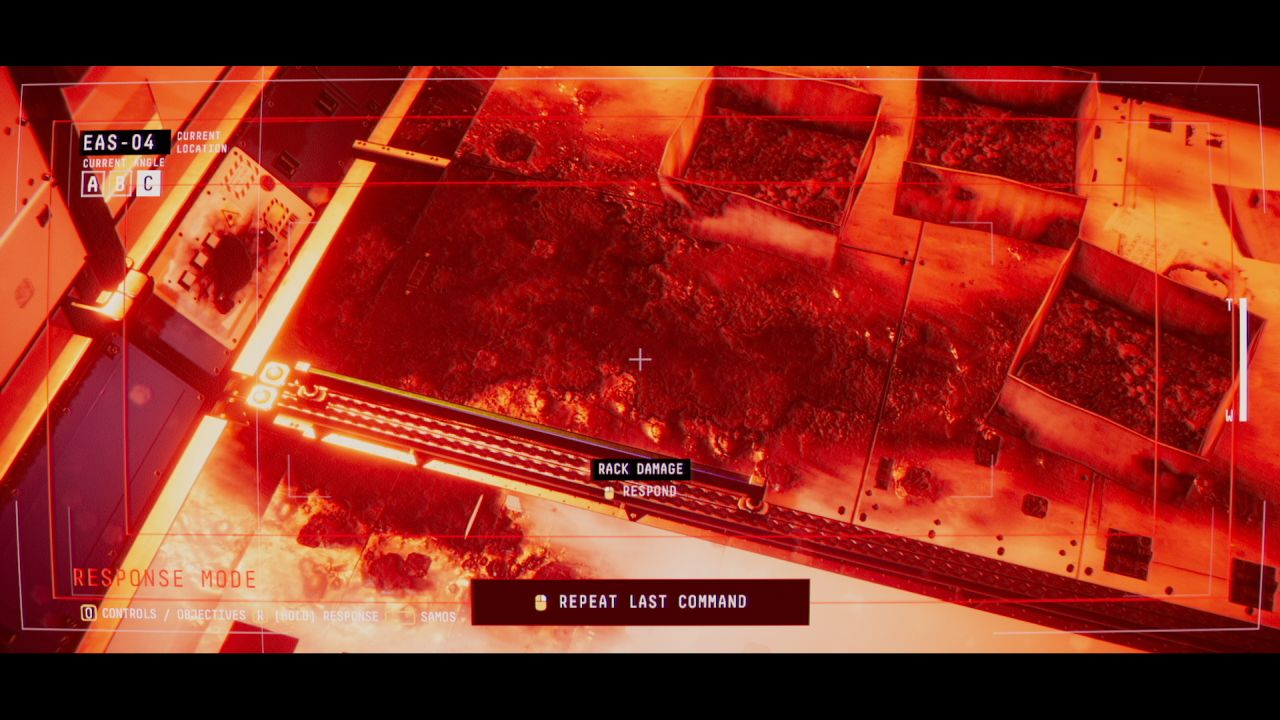 You're not a person, although Emma often treats you as one. (Don't blame her.) Your role, your actual job, is one of many contrasts of the game: you're a marvel that mostly does grunt work. You fix computers and reattach docking clamps, taking care of a ship that seems incapable of taking care of itself - until you think about that for a bit. Often, you're tasked with gathering data for your decision-making human. Sometimes that means light detective work.

There's a fire, early on. You discover it, at Emma's direction, tabbing through station readouts for indications of peril. When you eventually locate the inferno, you see it through pallid camera fuzz, then report it through similarly inhuman tones. It's deadly, but you're not alive.

Emma is. Observation both succeeds and fails spectacularly during its 7-8 hours, but its core triumph lies right there. I must have dealt with hundreds of videogame fires, but few have elicited the same urgency. That's partly thanks to a stellar performance from lead actor Kezia Burrows as Emma, gifted with an uncanny ability to sell 'panicked dealing with shit going wrong in space'. More important, though, is your relation to her. Your role defines your desperation, your empathy. It's brilliant, really. You're a caretaker, incapable of care. 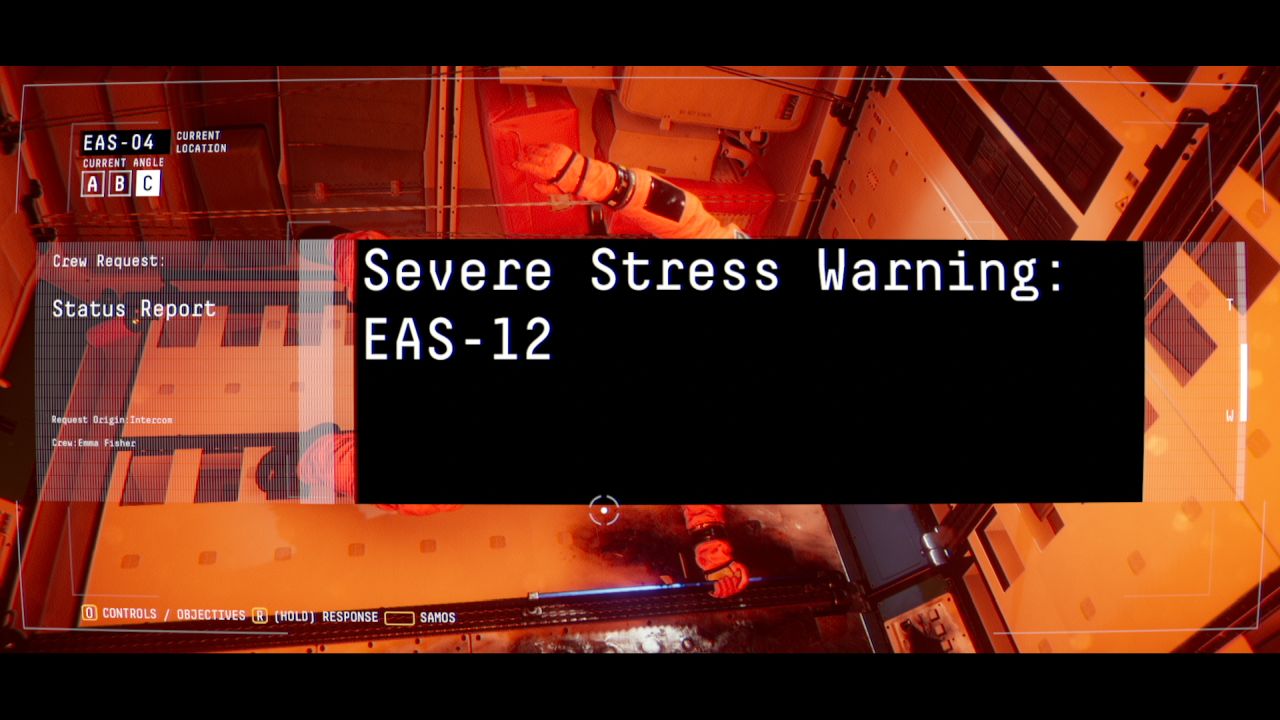 Except! You, the fleshblob, obviously are. You're the ghost in the machine, a soul (of sorts) that doesn't know what to make of itself. When Observation plays with that, it does so masterfully. Your very first act, in AI unlife, is to confirm or deny Emma's voice authentication. Naturally I picked the decline option, even when my screen told me the authorisation read true. She cursed and resorted to a manual override (there are no branching paths, as far as I'm aware). When for some reason she needed to do that again, perhaps an hour in, I eagerly buzzed her through despite it reading false. Back when that fire was a-raging, I failed to open a door as Emma counted me down, and felt legitimately horrible. I'm not being hyperbolic. The feeling reached my stomach.

If you do want to be a rogue AI, you won't have much room to play. "Choices" like that are rare, and you have to get on with your robo-chores whether you like it or not. Fortunately, they're weirdly engaging. I like that none of them require much thinking, and I love that they require exactly the right type. The goal is always simple, the route only a little less so. You twiddle with dials and trace patterns on grids, mostly engaging the bits of your brain that solve tasks automatically. How's that for thematic resonance, eh? 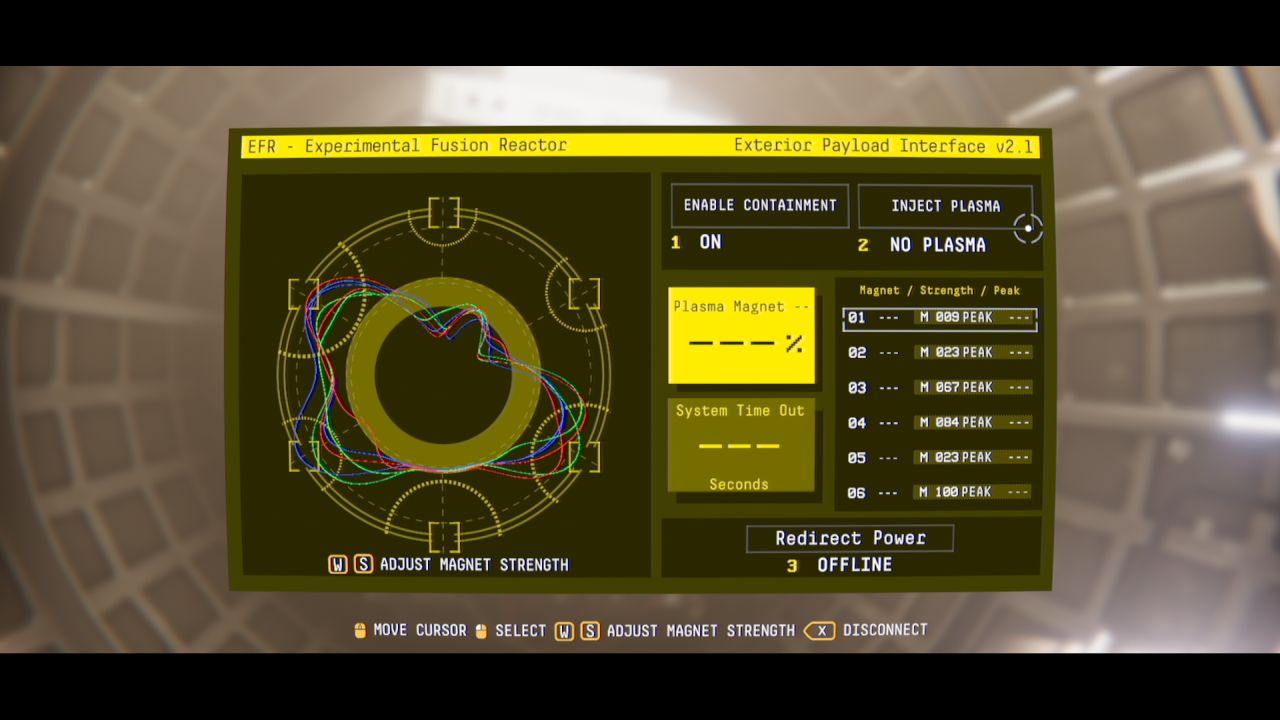 I wish I could go on like this. Praising the elements that work, celebrating what makes Observation one of the cleverest and most interesting games I've ever played. I can't though, because it also happens to be one of the most frustrating.

While the puzzles themselves offer a perfect degree of resistance, figuring out what you're supposed to do outside of them can be nightmarish. I have a tendency to trip over games that don't explain themselves well, but I've no doubt that Observation is a particularly cruel repeat offender. I dearly wish I'd been playing once walkthroughs were out in the wild. Some of the frustration stems from how easily that could have been avoided. To take an early, representative example, at one point Emma told me to "use my system links" to get a door open. There is a button labelled "system links" that brings up a visual overlay that it turns out you can't interact with, though I of course spent ages trying to do just that. 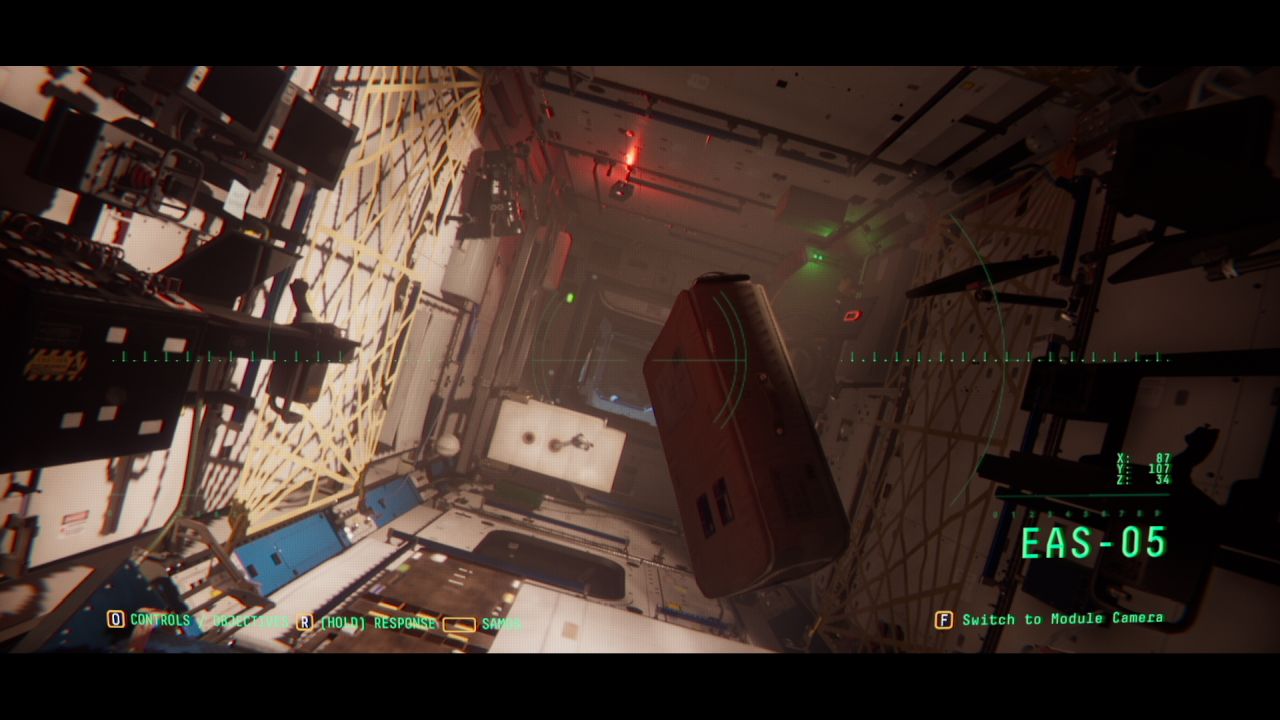 The world violates certain basic rules, like containing identical laptops that you can only sometimes interact with. There is a dusting of audiolog hunting, in theory affording you a more informed perspective on the story. But they are either not detailed enough or I’m not diligent enough to find them significant (with one notable exception). There are sections where you possess a sphere to venture outside, and I can virtually guarantee you will get lost in space. You'll only have yourself for jolly robot company, so it will suck even worse than the remake. 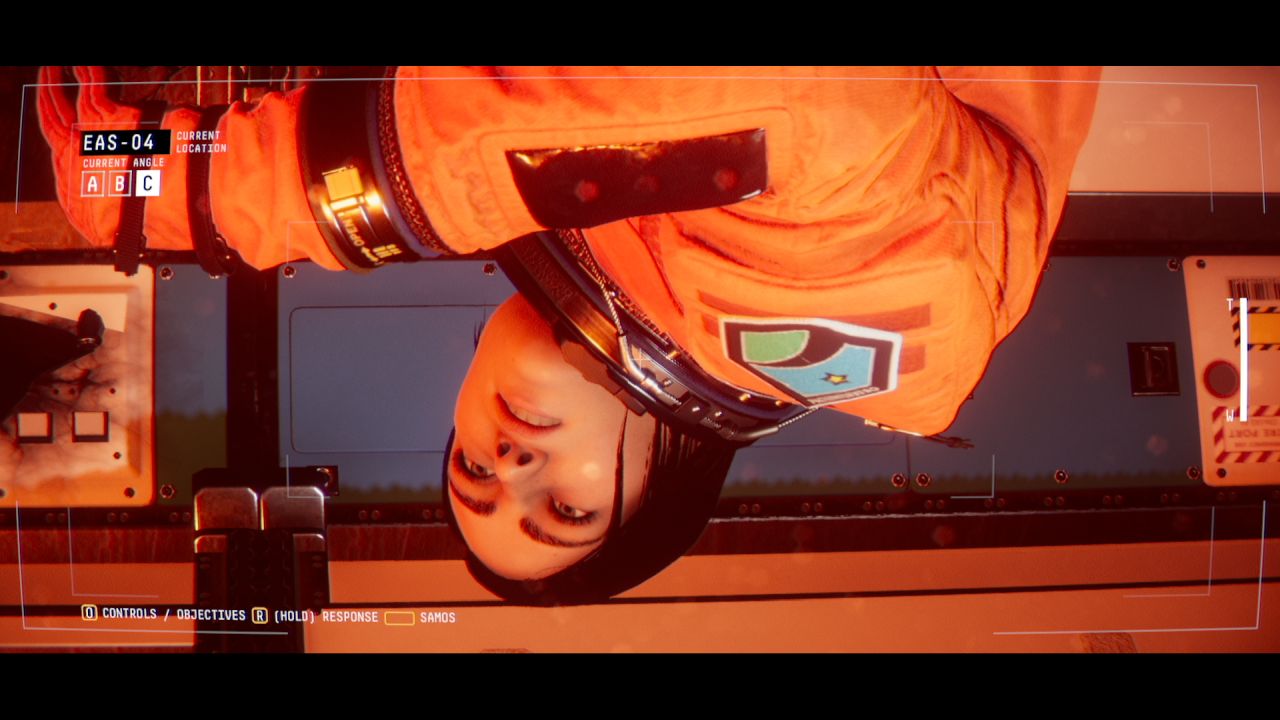 It felt like I hardly went ten minutes without bumping into an obfuscated obstacle, and then sometimes spent twice that long figuring out how to get past it. Even so, if those boiled down to moments of isolated frustration, I might bring myself to forgive them. Certain scenes are electric, and one particular revelation made me stop and gape at my monitor with my mouth open. For every scene of that calibre, though, there was one where poor direction arrested my momentum, and all tension along with it. There is an utterly agonising section where you have to search the ship in one of those observation spheres (see what they did there), but everything looks the same and its dark and you have to keep flipping your orientation, so you get completely stuck and forget you even care about the big space emergency.

I've been vague as to what that emergency might be, because Observation tells one of those stories that particularly benefits from going in with minimal expectations. I will say that it goes to some places you might expect, and some places you won't. Maybe you'd rather it explore some themes more thoroughly, and leave other elements drifting in the void. Maybe you'll like it. Maybe I should stop being cryptic and return to safer territory. 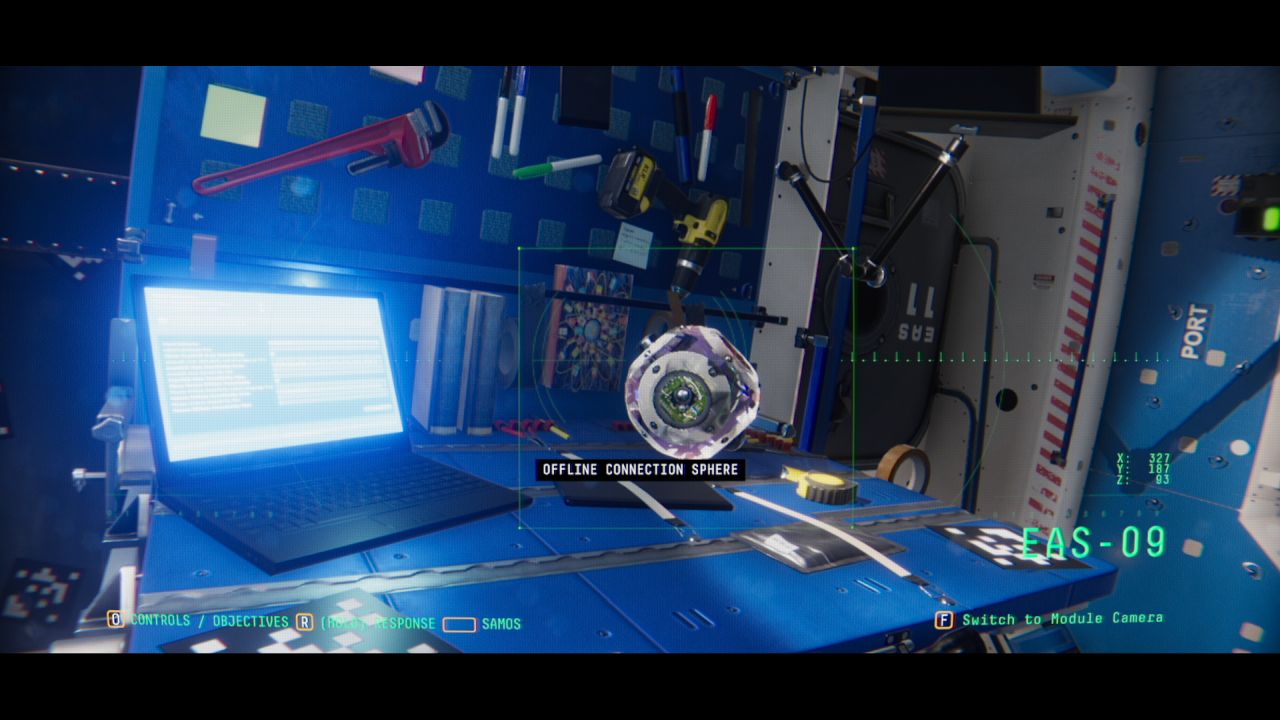 Observation is clever, but it's also astoundingly dumb. You're placed in a unique perspective, where onscreen inhumanity accentuates your oh-so-human instincts. Then it subverts that! But then it makes you control a sphere that can't move directly up or down, furthering the nightmare of navigating already labyrinthine spaces. It asks you to do something, without telling you how.

It's worth persevering with. When you get stuck though, don't hesitate to use a walkthrough.