“It’s a little bit like a molotov cocktail,” says Lorne Lanning, the head of Oddworld Inhabitants. He is holding a bottle full of flammable soda pop with a rag stuffed in the top. “So if I was about to use that on a guy who was pretty helplessly bound up,” he continues, gesturing at an alien henchman lying on the floor wrapped in duct tape, “that would be pretty bad, right?” He throws the bottle of fiery liquid. It explodes in a shower of flames, engulfing not only the struggling alien guard on the floor but two bystanding factory workers.

This is Oddworld Soulstorm, the latest game about Abe the clumsy Mudoken. It’s chaos.

Lanning is demonstrating the game to me. He observes Abe’s flaming alien pals with the calmness of a man who is not legitimately sorry for setting them all alight. Still, he wants to show me what a player should do in this situation. He whips out a fire extinguisher, one of the many tools Abe can find in lockers or vending machines, and starts splooshing white powder over his the alien workers to “put ‘em out fast”. But the alien workers have already melted. 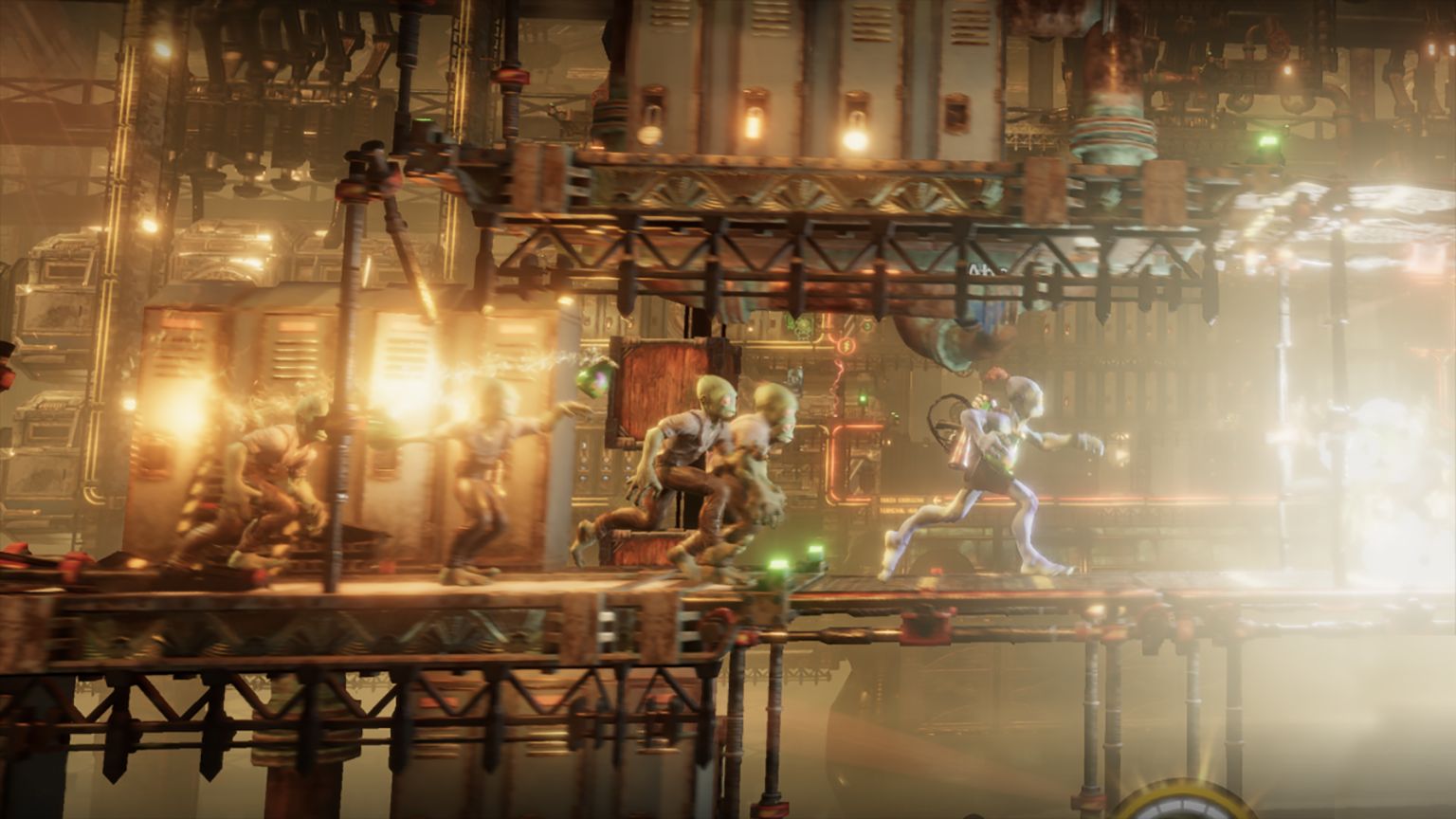 It’s far more action than I expected. Abe has rarely been an action hero, instead often hiding in the shadows of the puzzle platformer genre. In older games your only weapon was the power of possession, where you’d take over gun-toting Sligs and monstrous creatures of Oddworld to get from one place to another. But in my short time with nu-Abe there were countless explosions of gas and fire. I lobbed many gassy bombs. Sligs can shoot metallic panels from under you, or takes pips off your health bar. And one sequence sees the gang of extraterrestrial escapees board a lift with a turret on top, allowing you to blast all around you. 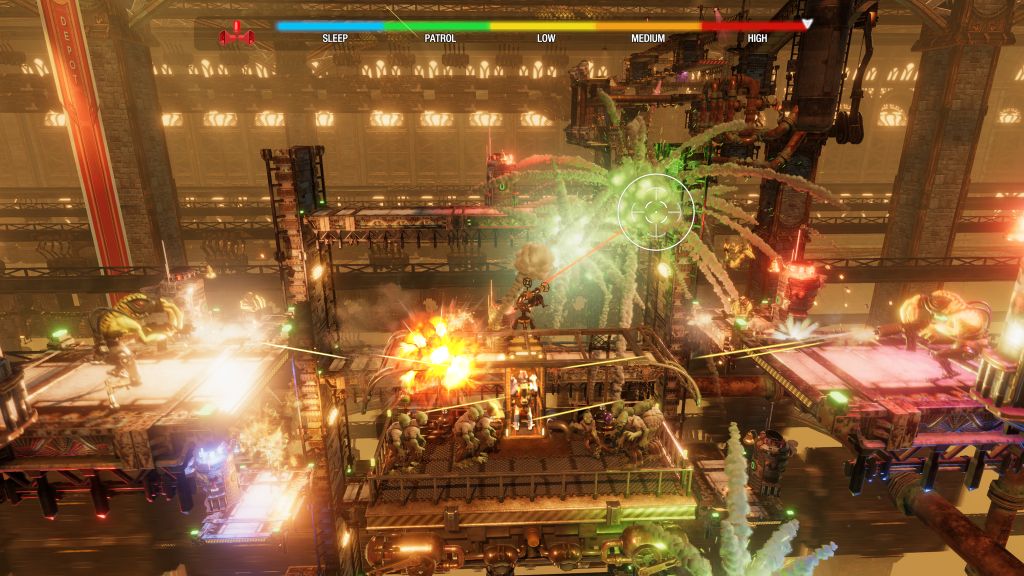 It's maybe even a little too busy. But a lot of the old green blood still flows. Abe can still sneak around (and even pickpoket slumbering Slig henchmen), and he can still possess an enemy (although there’s now a time limit on this). But there’s also a lot of crafting to do – that’s something new. You rummage in bins and lockers for junk, then piece it together in a menu to make throwable weapons. There are also pacifistic ways to go about your jailbreak. But to do that you might have to play some alien snooker.

In essence, Abe can throw certain objects like his molotov cocktail. Bottles and jawbreakers are the main thing. But to throw these "sticky fizzy pows" into hard-to-reach places you have to wrap elastic bands around them, letting them bounce off walls with each rubbery circlet. Basically, you end up playing a game of pool with your lemonade grenades, bouncing them around corners and off the ceiling to set distant enemies alight. If you use a bouncy jawbreaker with some duct tape attached, you can wrap up your foes without killing them. Which is important if you want to avoid bad “Quarma”. 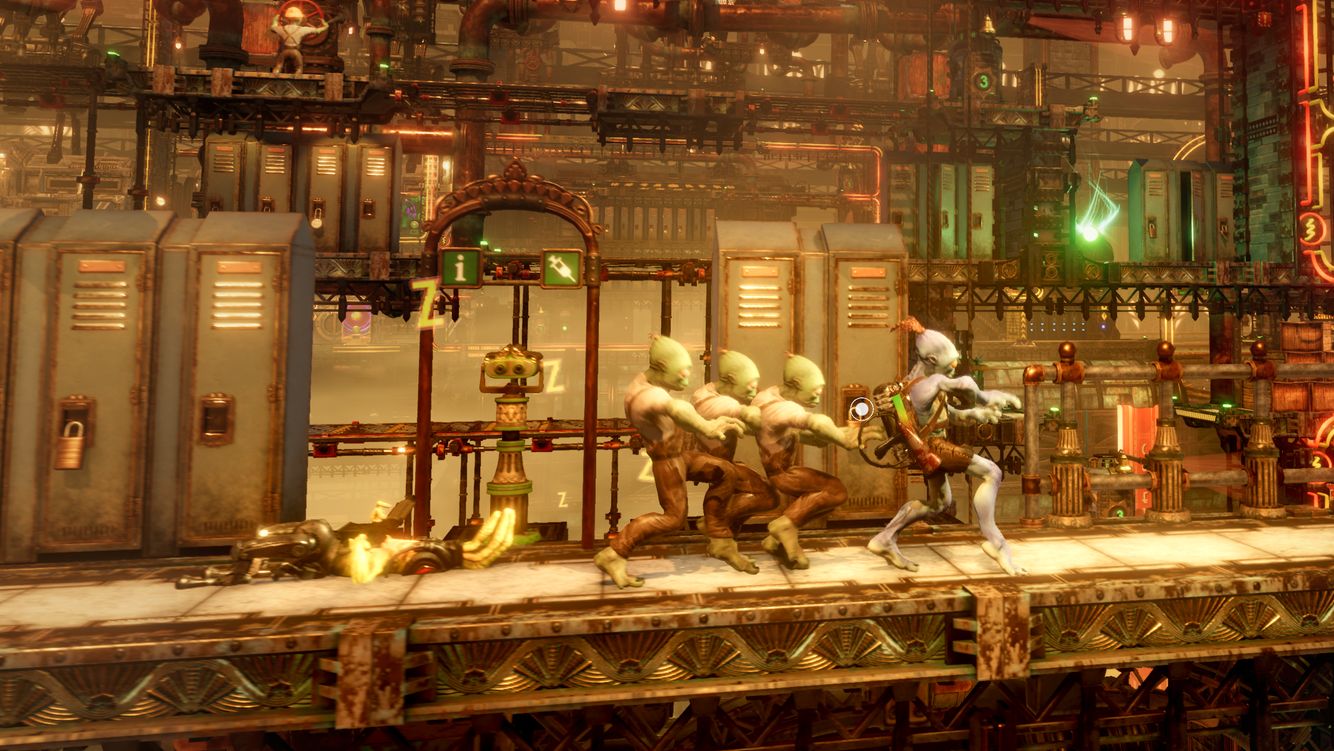 This is the Oddworldian morality of previous games remade. In past Abeventures you would get good or bad endings depending on how many workers you managed to save. Something similar will happen in Soulstorm, I'm told, but now your Quarma level matters moment-to-moment as well. Your spiritual powers, like possession, will depend on how sullied your Mudoken soul is. When your pals die, a black trail of smoke floats into Abe’s body. Will you still get bad Quarma, I ask Lanning, if you kill the bad guys?

The Oddworlds are silly, dark comedies in a strange place. And yet they have often been surprisingly conscious of big human problems – the planet is dying, the animals are being wiped out, native people are oppressed, big business is destroying nature. It’s a strange appeal of Abe that he is capable of making a simple, environmentalist point while periodically pausing to possess an exploding fart. 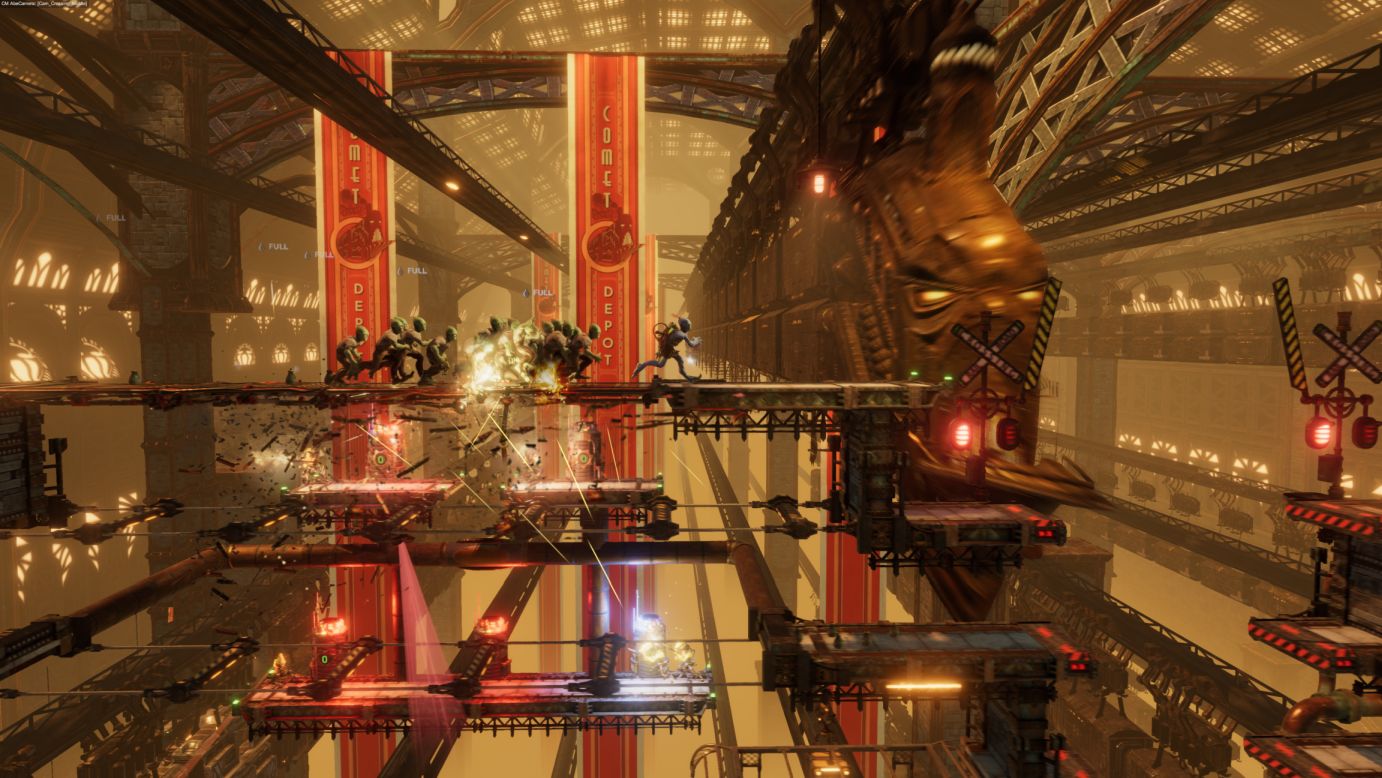 Over the course of the game you'll collect followers to join your growing squad, and here too you can choose to play Soulstorm with slightly less chaos (although nothing in the demo was exactly “the quiet route”). You could arm your followers with bombs and set them to “aggressive mode” which makes them lob bombs of their own automatically. Or you could make sure they’re in passive mode, in which they “start doing yoga and shit.”

“We really wanted that feeling that you’re building a gang every level,” says Lanning. “There’s probably about a thousand [workers] in the game that you’re gonna rescue ultimately.”

That’s the heart of an Abe game, really. It is about being the head Lemming, and sometimes accidentally covering your friends in cheap napalm. Lanning is gleeful while playing, so much so that he often gets distracted by looking in bins, or throwing dozens of fart-gas grenades that pop into clouds of sewer-green mist. 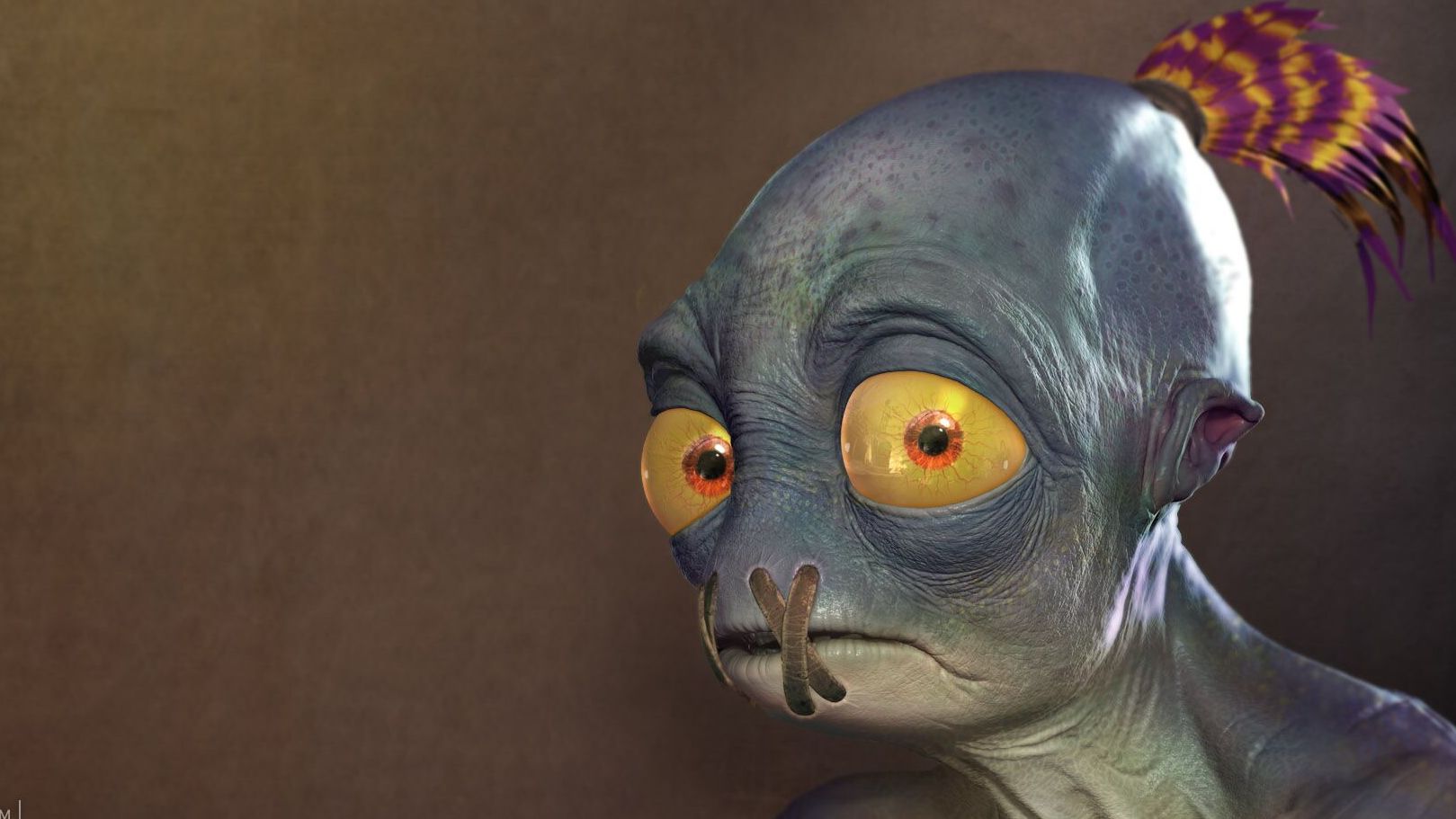 “We like making effects and colours that are derivative of pop and consumer products,” says Lanning. “Junk food colours.”

He intermittently bursts into giggles at accidental deaths, he mutters “bastard” at troublesome Sligs, and there’s something infectious and refreshing about his enjoyment. I rarely see industry names as storied as Lanning even playing their own game, never mind playing it in such an absorbed way.

“I’ve only had two guys get whacked this time,” he says. “It’s a record for me.”

Lanning reaches the end of the level, where a circle of flapping birds expands into a portal through which Abe’s brethren can escape. I recognise the portal well. I’ve always seen Oddworld games as funny stories with a dark undertone, the tale of an underclass trapped in the machinery of a big business that is uncaring and environmentally destructive. Oddgames have always had that sort of message, between the burp jokes. Lanning says that message is still there “big time”. But he sees Abe’s story more as that of a people who have been lied to for generations.

“It would never occur to him to be left or right,” he says, “they’re just on the run trying to save their own skin. And then they [the Mudokens] find out everything they knew was a lie... that almost everything everyone knows is a lie.

“They’re really magnificent beings that have been taught to believe they’re nothing.”