It's easy to mock Capcom's seemingly endless stream of reboots and re-releases, but if there's one game in the publisher's back catalogue that truly deserves to be reincarnated for the modern age, it's Clover Studio's Okami. While Clover itself has since faded into the mists of time (the remnants going on to form Bayonetta studio PlatinumGames), its ink-washed tale of Japanese sun gods and monstrous demons remains as bright and vibrant as ever, the last ten-odd years bouncing off wolf heroine Amaterasu's gleaming fur almost as if they never happened. Sure, there are still a few wrinkles and matted tufts here and there, but whatever anti-aging stuff Capcom and Hexa-drive used here, I want it, and I want it now.

To be fair, Okami was already a beautiful game when it first came out, but with support for up to 4K resolutions in this HD re-release, the sharp, crisp lines of its inky calligraphy are truly a sight to behold, with each of its large, sweeping vistas looking even more like a Hokusai woodblock painting than they did before. I sunk over 80 hours into the Wii port back in 2009, but actually being able to see the detail in enemy demons' movements and behaviour instead of gazing at them through the haze of my tiny CRT TV almost feels like I'm looking at it completely afresh – and that's a wonderful feeling to have with any game you love and adore.

Okami's a lot more than just a pretty face, of course. Before Breath of the Wild came along and ruined action adventure games forevermore, Okami was the closest anyone got to a true Zelda successor, its sprawling plains, forests, towns, oceans and chilly mountains housing dungeons and quest-giving NPCs aplenty as you set out on a quest to stop a 100-year-old curse from besieging the land of Nippon once more. 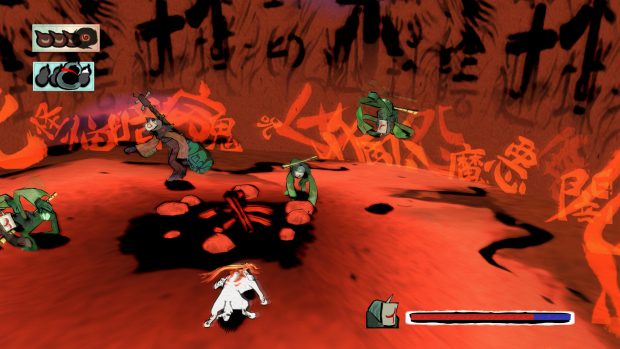 Okami's true masterstroke, however, was how it proved that the pen (or brush, in this case) was mightier than the sword. For just as its worlds are crafted from broad splashes of watercolour, so too are Amaterasu's attacks and interactions. Hold down Ctrl and a parchment scroll appears on the screen, allowing you to pause the action and draw rudimentary signs and symbols with your mouse over what's playing out underneath.

Whether it's a simple line for a scathing slice attack in battle, a circle to draw out the sun, or a messy scribble to make a broken bridge reappear good as new, the mouse is an excellent fit for Amaterasu's Celestial Brush. It feels far more natural than playing with a controller and brings a welcome sense of speed and immediacy to battles in particular, letting you pretend for the briefest moment that you, too, could be some kind of ninja calligraphy master. 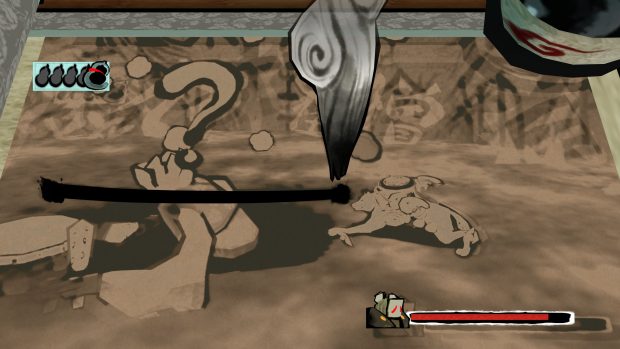 Just be careful you don't overdo it, as each successful brushstroke depletes one of Ammy's ink pots. Use them up too fast and you'll effectively be reduced to the canine equivalent of fighting in your undies, your weapons and godly crimson streaks stripped away until your ink recharges. You can still use simple bite and kick attacks in the meantime, but learning how to manage your ink reserves well is vital if you're going to capitalise on the time and damage-based rewards doled out at the end of each fight. It's pretty forgiving on the whole, though, and if you're a bit rubbish at the combat there are still ample opportunities to make a quick dime by selling off the many treasures you'll find around the world without getting into a scrap.

There are 13 different brushstrokes to learn in total, and you'll need to use nearly all of them to exploit enemy weaknesses, in addition to Amaterasu's standard melee attacks. These change depending on the combination of shield-like mirrors, beads and glaives you equip as her main and sub weapons. This keeps battles feeling fresh and engaging, for while later enemies are often tooled-up versions of their weaker siblings, peeling away their armour with different techniques still feels like a pacey, breathless puzzle as you juggle multiple foes in confined battle arenas.

You don't necessarily have to engage with enemies in the wider world if you'd rather just get on with the story, but as with any game Hideki Kamiya's had a directorial hand in, it would be a shame not to, especially when combat is stuffed with the same irreverent humour and sense of fun as the rest of the game. Okami's fights aren't as deep or intricate as those in Kamiya's other works (Devil May Cry, Bayonetta, etc), but what other game has enemies slap their bum as a taunt and then lets you humiliate them in turn by peeing on them mid-battle? 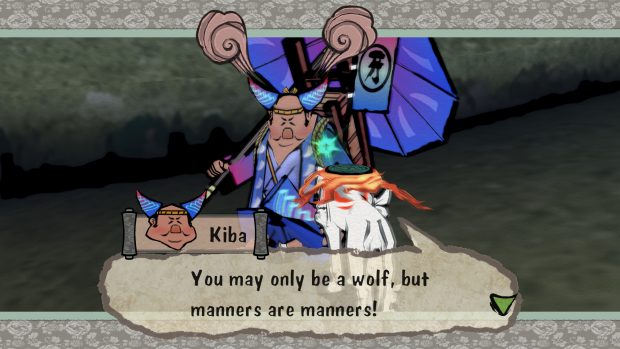 Bosses in particular feel like real set-pieces, almost like blueprints for the kind of outrageous scale and magnitude that went on to become Bayonetta's bread and butter. Defeating an eight-headed dragon by getting each of its yabbering numskulls drunk on booze is a fantastic climax to the game's first act, as is going toe to toe (or should that be tail to tail?) with the famous kitsune Ninetails later on, who turns your brushstrokes against you.

Admittedly, Okami gets a bad case of Mega Man syndrome toward the end as it forces players to revisit earlier boss battles again and again before they reach the game's true foe, but it's hard to begrudge it too much when the preceding 60-odd hours have been so generous, both in its overall sense of adventure and the sheer wealth of stuff to do. When a game's this good-looking, you'll want to erase every last blighted bit of land and dilapidated demon gate to keep it looking its best, and everything from nourishing the local wildlife with bags of food to rejuvenating wilted cherry blossom trees feeds back into the game's praise system that lets you upgrade your purse, life and ink bars. 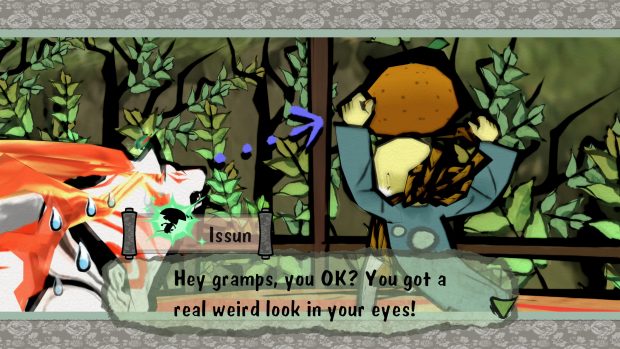 The local people you meet along the way are just as charming as everything else, with their simple facial expressions and block colour designs hiding a wonderful sense of life and vitality. They fume in anger when Ammy accidentally headbutts them or digs up their turnips, and will look around confused if you use your brush to extinguish nearby lanterns and the like. Even locked doors have a personality in this game, and there's nothing quite like watching a one-eyed lock sweat and squirm in its frame as you approach with the requisite key.

It can be a bit of a slow burner at times, and the inexplicable decision to let players speed through text one minute and then force them read EVERY. SINGLE. LETTER. REALLY. QUITE. SLOWLY the next during certain cutscenes can make it feel like a bit of a drag. I just want to play more of your lovely game, Capcom, not stand here listening to a boy blather on about his lost dog in his nonsense gobbledygook voice for five straight minutes. 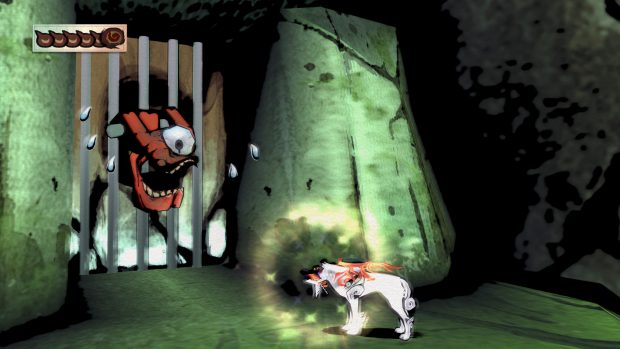 On the whole, though, Okami is a delight from start to finish. It gives you the freedom to savour and indulge in every last drop of its ink-washed world, and its combat and story are both superb - particularly if you have even the slightest bit of interest in Japanese mythology (the tales may not be quite as familiar to us in the west, but it's as chock full of myths and fairy tales as Telltale's The Wolf Among Us, for instance). The controls also feel reborn on PC, and the decade it's taken to get here has been more than worth the wait. This is Okami how it was always meant to be played, and just goes to show you absolutely can teach an old dog new tricks.

Okami HD is out now for Windows PC and is available via Steam for £15.99.