War never changes, but Fallout changed most everything else.

Perhaps the enduring reason many haggard old PC gamers (hello!) still look to Fallout as a high watermark of computer roleplaying is the sheer degree of choice it offered. Not just in terms of how you designed your character and the numbers you could pour into them, but also - more so - in terms of having multiple ways to solve a problem.

'Shoot them all' was only one of these but, beautifully/monstrously, that too was available as an option in scenes where so many other games would lock it off. Talking people around, threatening them, breaking and entering, lying: all sorts.

There was no one necessary right answer - and this applied to the game's main storyline as a whole. You could effectively ignore it all, or straight-up murder the main quest-giver. Fallout was your place, to do with as you chose. 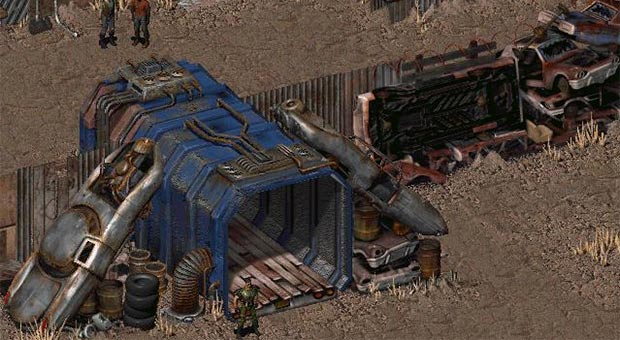 Sure, Bethesda's takes on the Fallout formula offered gloss and adrenaline and a new sense of scale, and Fallout 3 isn't too bad at offering conversation-based solutions to your problems (Fallout 4, less so), but they never quite managed to offer that same ability to rip up the whole world.

And what a world it was too. From humble, inspect-splatting beginnings that suggested a more traditional fantasy game it grows and grows, from outposts to town to cities to heavily-armed fortresses, from Max Max to The Jetsons to Norman Rockwell, from drunken bandits to supermutants to Warhammer 40,000 cast-offs. Fallout 4 was a game that said both you and it could do anything you or it wanted.

[Never played it? It's free on Steam until the end of the day. --Ed]