Co-op chef-‘em-up Overcooked 2, much like its predecessor, is less about cooking and more about chaos management. The sequel builds on the solid foundation of the first game, bringing in new recipes, hazardous levels, and online multiplayer for maximum pandemonium. Oh, and you can throw ingredients now, which can be incredibly slick if you sling them across the kitchen and directly into a pan, but will more likely result in smacking your co-chefs in the face. It’s pretty great.

Tasked with saving the Onion King’s castle from the ravenous hordes of the Un-bread, your team must hone their skills in six worlds of six levels each, in order to eventually throw a huge feast for these hungry loaves and stop them from, presumably, eating the King instead.

Each level requires preparing and serving various meals, which may be as simple as slicing lettuce or mixing and baking a honey and chocolate cake. These steps are themselves straightforward, but there is constant time pressure. If you’re quick, you’ll earn good tips, and if you’re not your customers will eventually leave and take some of your money with them. When time runs out your cash is counted and rated from one to three stars, so there’s incentive to try to go back and do better, adding to the 6-ish hours it takes to run the campaign straight through. 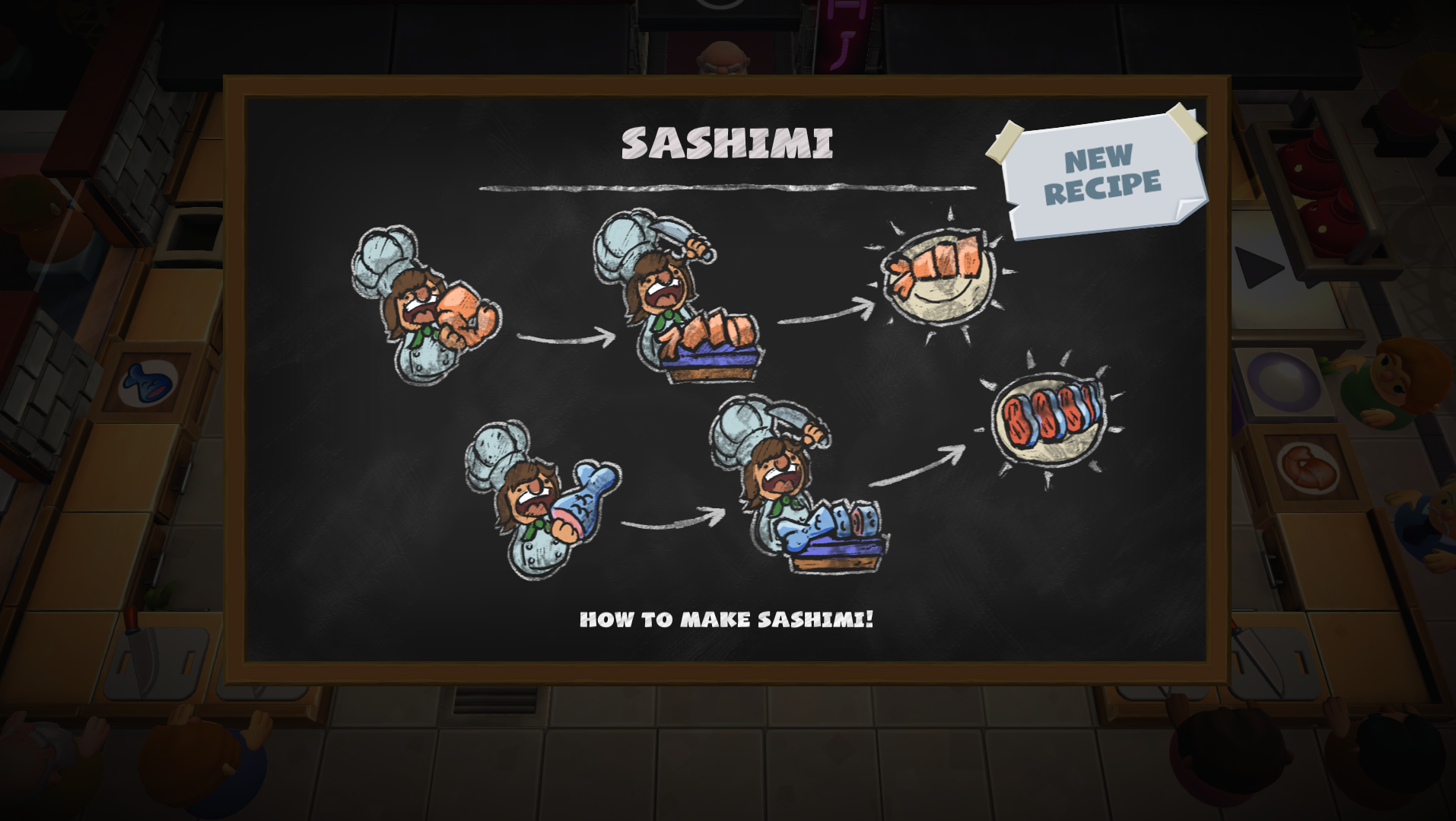 Certain tasks are more demanding than others, in that if you leave something cooking for too long it’s liable to set itself, and then the rest of the kitchen, on fire. These kinds of slip-ups are where things can cascade, and the game will let you feel the pressure with smart sound design in everything from the mounting dramatic music as time ticks on to the insistent beeping of appliances that need your attention. But don’t panic! No matter how badly things go wrong, there’s always a way to get things back on track. The fire extinguisher is your best friend.

It’s in navigating the kitchens that the real skill comes in. Each has its own obstacles and dangers that complicate the cooking process. For example, one sees you dashing across a road, dodging incoming traffic with arms piled high with dirty plates. Others might be cursed, making their furniture move at random, or have creatively placed treadmills that propel you in one direction – usually not the one you want. Some just have bottomless pits in the centre - suffice to say there doesn't seem to be a lot of health and safety regulation in the Onion Kingdom.

As well as requiring smart individual movement, this variation in levels combined with the fact that each dish has different preparation steps emphasises and enforces cooperation between players. While it might be tempting to give each person their own job, like cutting ingredients or washing dishes, it’s usually not possible thanks to the weird kitchen quirks. For example, a moving shelf might trap one person at a time in a corner of the kitchen, necessitating quick role-switching, or those pesky chasms may separate chefs, requiring them to throw ingredients to one another rather than make arduous trips around.

If you do get sick of cooperation, though, versus mode splits players into two teams – so if you’re playing one-on-one, you’ll need to control two chefs at once. This is where you’ll find out exactly who’s been carrying (and reader, it wasn’t me.) Plus, the levels are designed for maximum sabotage, allowing everything from hogging the chopping boards to straight up stealing completed dishes. There’s also an arcade mode, for players who just want to hop into a specific kind of level, and hidden stages, which are accessed by completing secret challenges in ordinary levels. (What those challenges are isn’t entirely clear, even when you do manage to accidentally complete them.) 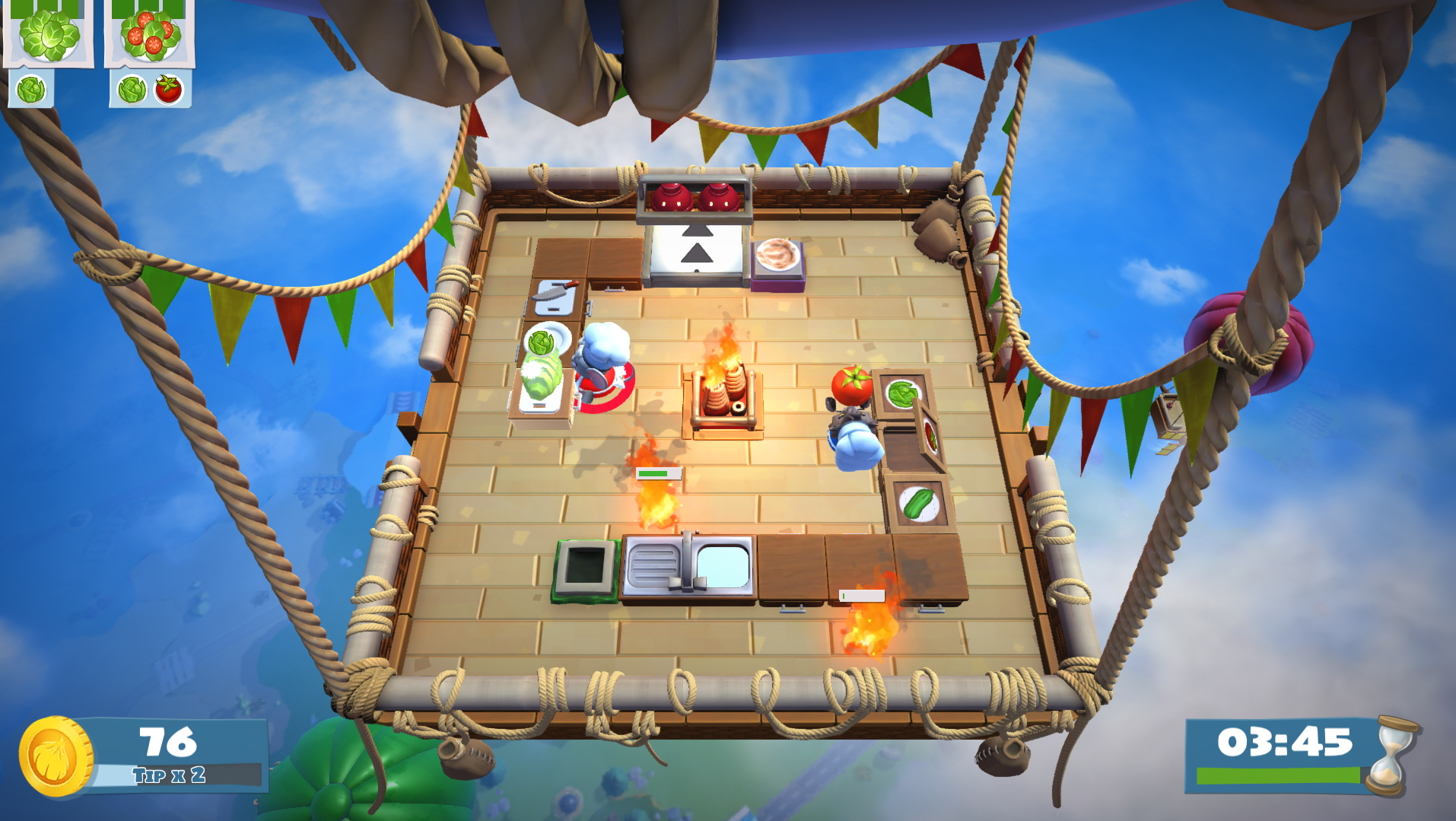 No matter what mode, level gimmicks aren’t always immediately obvious, but rarely are they surprising enough that you can’t learn their tricks quickly - only a few levels took more than one try to pass. There’s also a good variety between hectic kitchens that require constant communication and more zen flow states, where cooks can find their groove and work together somewhat more elegantly, with each world ramping up its difficulty noticeably but fairly through its stages.

Moreover, despite being a largely frantic experience, the game also brings plenty of levity to the table. It’s forgiving enough that falling off a ledge is more slapstick than frustrating, for example. And its cartoony characters show that there’s room in the kitchen for everyone from grannies to racoons who use wheelchairs. And a couple of bugs (mostly crashes in loading screens) couldn’t undermine the overall feel-good sense of satisfying customers with a good meal. It’s easy, in our calorie-obsessed society, to forget that food is supposed to be something wholesome and nourishing. This game doesn’t make that mistake. Every aspect is celebratory, from the light-hearted chaos of its preparation to its ability to calm the zombie bread at the gates.

Like any good recipe, Overcooked 2 is more than the sum of its parts. It’s fast-paced, hilarious, and just the right amount of stressful, and that all comes together into one of the most fun and moreish co-op games I’ve played in years.