When it comes to scenario durations, CMBO is as pedantic as a parks department pedalo führer. Unlike its successors, it always halts battles at precisely the advertised time. Overlordy will have no false dawns... no painfully extended death rattle. The defence of Caent will end in exactly sixty seconds' time.

My final order implementation duties are hardly onerous. Confident that the defensive arrangements that saw them through Turn 19 with barely a scratch will see them through Turn 20 just as painlessly, the Comment Commanders leave most of their units to their own devices. Apart from some minor meddling in the east, and some Hetzer adjustments in the centre, “Keep doing what you're doing” is the order of the minute.

For the first twenty seconds of the action phase the battered Brits seem as uninterested in last-gasp glory-hunting as the Germans. Bullets continue to nibble at the bakery and stalk the lanes islanding the blazing hotel, but most are making for static targets relatively safe behind bulwarks of brick or timber. 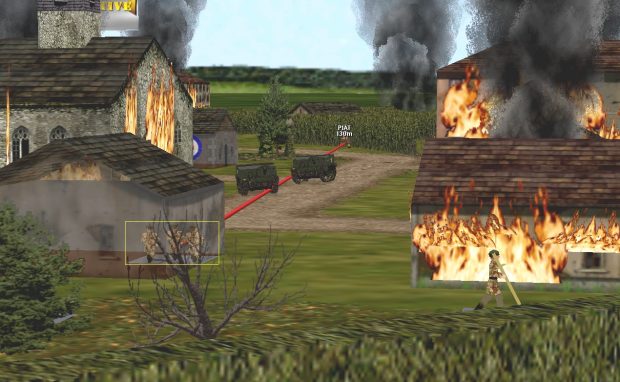 The illusion of armistice vanishes circa T+22 when a squad of Tommies emerge from the cottage south of the hotel, and hares north. 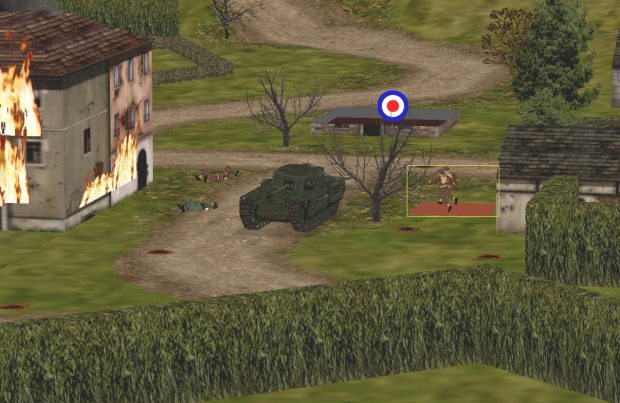 Harried by Kar98ks propped on the rim of the bomb crater at f23, the runners are almost across the street when the unit responsible for excavating that crater makes its fourth and final appearance. 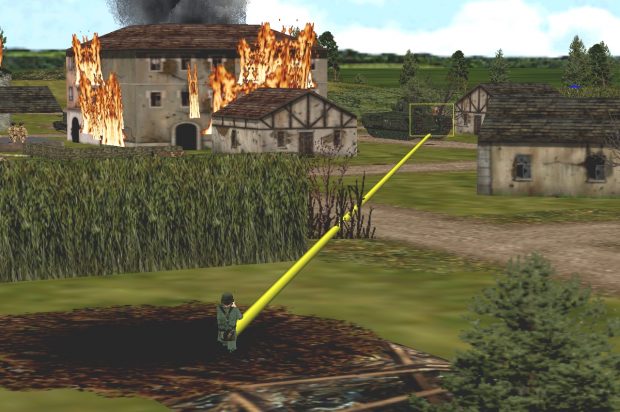 This time the Typhoon pilot isn't distracted by immaterial matériel. He spots Brenner's battlewagon smokescreen erecting by the pond and gently guides the buttoned TD into the centre of his shivering reflector gunsight. 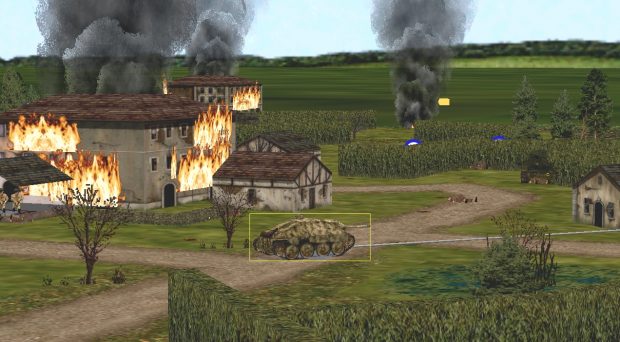 The first few cannon shells tear at cobblestones like happy rioters. The last few find something more meaningful to mutilate.

The Hetzer has been immobilized, a serious condition for any AFV, a calamitous one for a turretless TD like the Jagdpanzer 38. 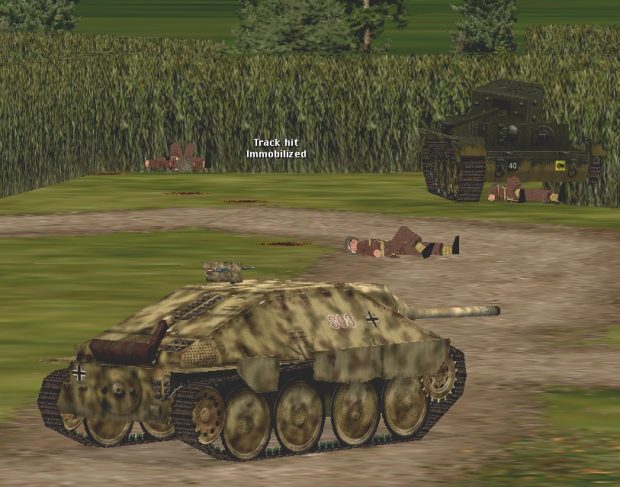 In the seconds following the Tiffy attack the British assaulters near the KOed Churchill adjust their trajectory, turning for the cottage that Larcher, the Pioneer platoon leader, defended so fiercely for so long. Are they hoping to take advantage of the Hetzer's disability and mount a daring last-minute AT attack? 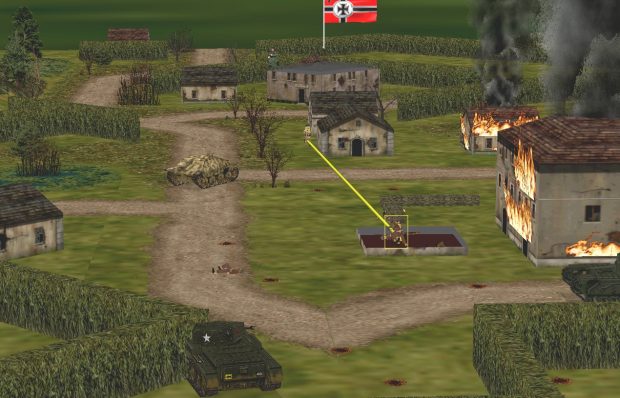 No, it seems not. Their doomed dash across i21 implies they were hoping to surprise the bakery defenders with a westward sally. 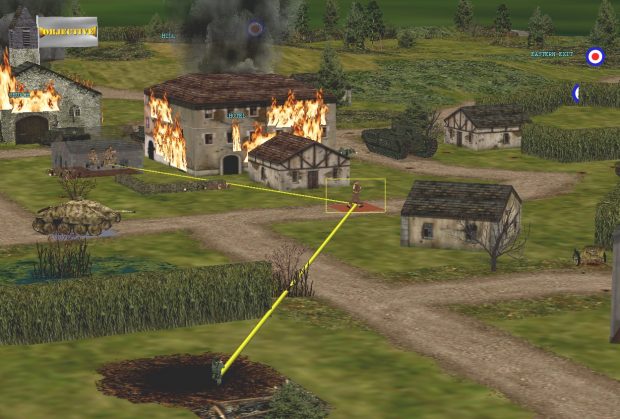 Their backs guarded by the Green Devils behind the hotel and the AVRE victims in the bomb crater, Nerbul and his men are free to concentrate on breaking up the game's last significant offensive action, a second surge from the denizens of West Wood. 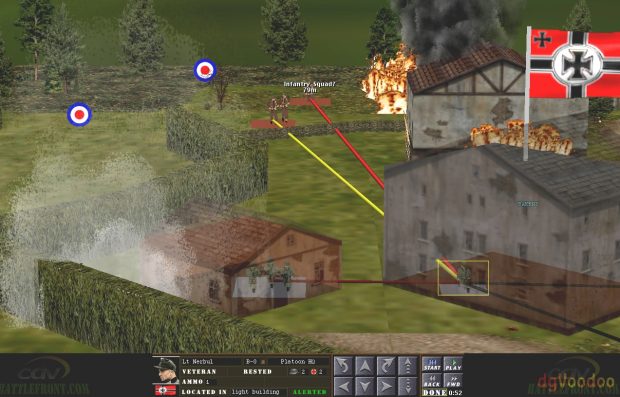 When the curtain falls, bloodied British infantry are detouring north past the body of Gruber, our heroic arsonist, in an effort to avoid the cramped kill zone west of the bakery. 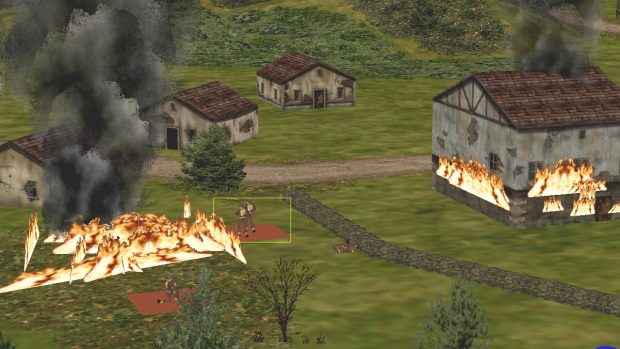 The flanking manouevre comes much too late to revitalise the faltering Allied advance and spare British blushes. Overlordy is a clear tactical victory for the Germans! 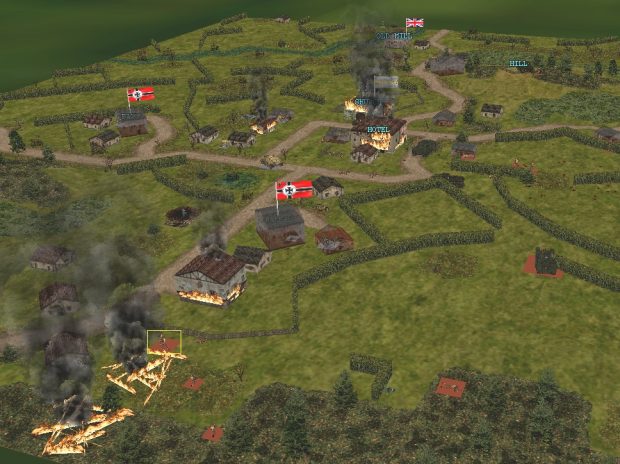 The scratch speed bump has done its job brilliantly. 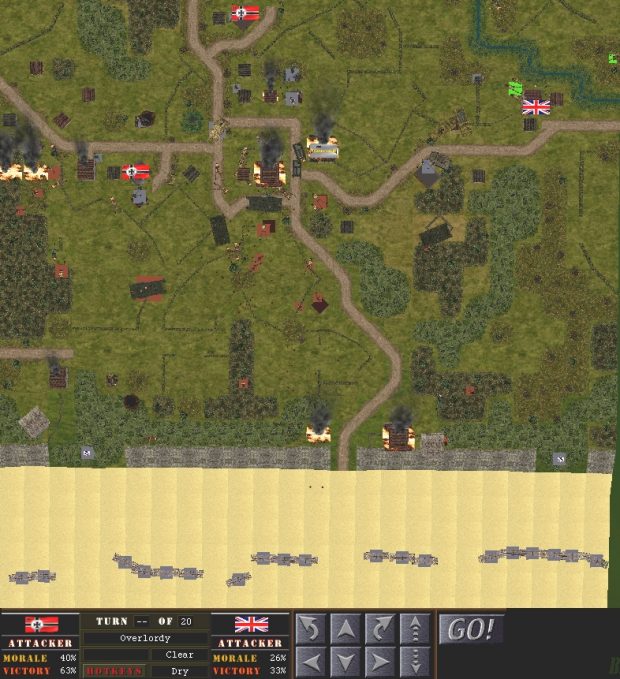 Tomorrow's Flare Path will include lots of Sid Meier's Gettysburg-style unit analysis (“Our deadliest unit was...” etc.) plus a scenario download link for those who fancy defending Caent single-handed. Many thanks to everyone who, via orders, helped write the script for this year's gruelling-but-gripping skirmish serial. Many thanks too to those who took the time to offer encouragement from the sidelines. Your engagement and enthusiasm has made the last three weeks of early starts, coordinate confusion, and tank synonym aphasia very easy to bear.