The Domain Of Timeless Conflict, centrepiece of Path Of Exile's upcoming free Legion update, isn't quite the mead-swilling viking afterlife, but it's close enough to be worth invading and looting. It'll hit Grinding Gear Games's free-to-play action RPG on June 7th and replaces the current (and controversial) Synthesis league. Legion adds a new quarterly source of loot and experience to the world, and permanently overhauls the game's melee combat. This is on top of the usual pile of new skill gems, unique items and a re-balance to make early-game monsters scary once more. See the trailer below.

The upcoming Legion league, which will run for around three months, is split into two halves. One you can dip into at your own pace while you're levelling up, and a significantly more advanced side for endgame players. As you work your way through the regular story zones, you'll encounter crystal monoliths. Touch them, and you'll temporarily phase into the Domain Of Timeless Conflict, where you can see armies of Wraeclast's past frozen in time. By hitting these frozen soldiers (and the treasure chests they guard), you'll mark them to be brought back with you when the timer runs out, and will have to fight everything you tagged.

There's a bit of risk/reward balance to this system. It's possible bring back too many extra enemies with you, resulting in getting stomped by a fight you were unprepared for, but it's entirely your fault if you do. Similarly, if you aim too low, you may get only a pittance as a reward. Many players felt that the Synthesis league (currently running) became too fiddly to deal with comfortably, and forced players to speed through areas they'd rather take slow. Legion is aiming to address that and let players choose the intensity of their side-questing without too much fuss.

Once you hit endgame, you'll be able to invade the Domain Of Timeless Conflict directly by killing enough soldiers from the various historical armies to assemble a complete army emblem. You can use the end-game Map Device to assemble between two to four emblems (or five after an upgrade), and throw down against up to five entire armies simultaneously. Obviously this has the potential to be very tough, but also a huge source of loot. It should also look absolutely spectacular, and leave you neck-deep in corpses. Plus, you're technically killing the dead, so no reason to feel bad? 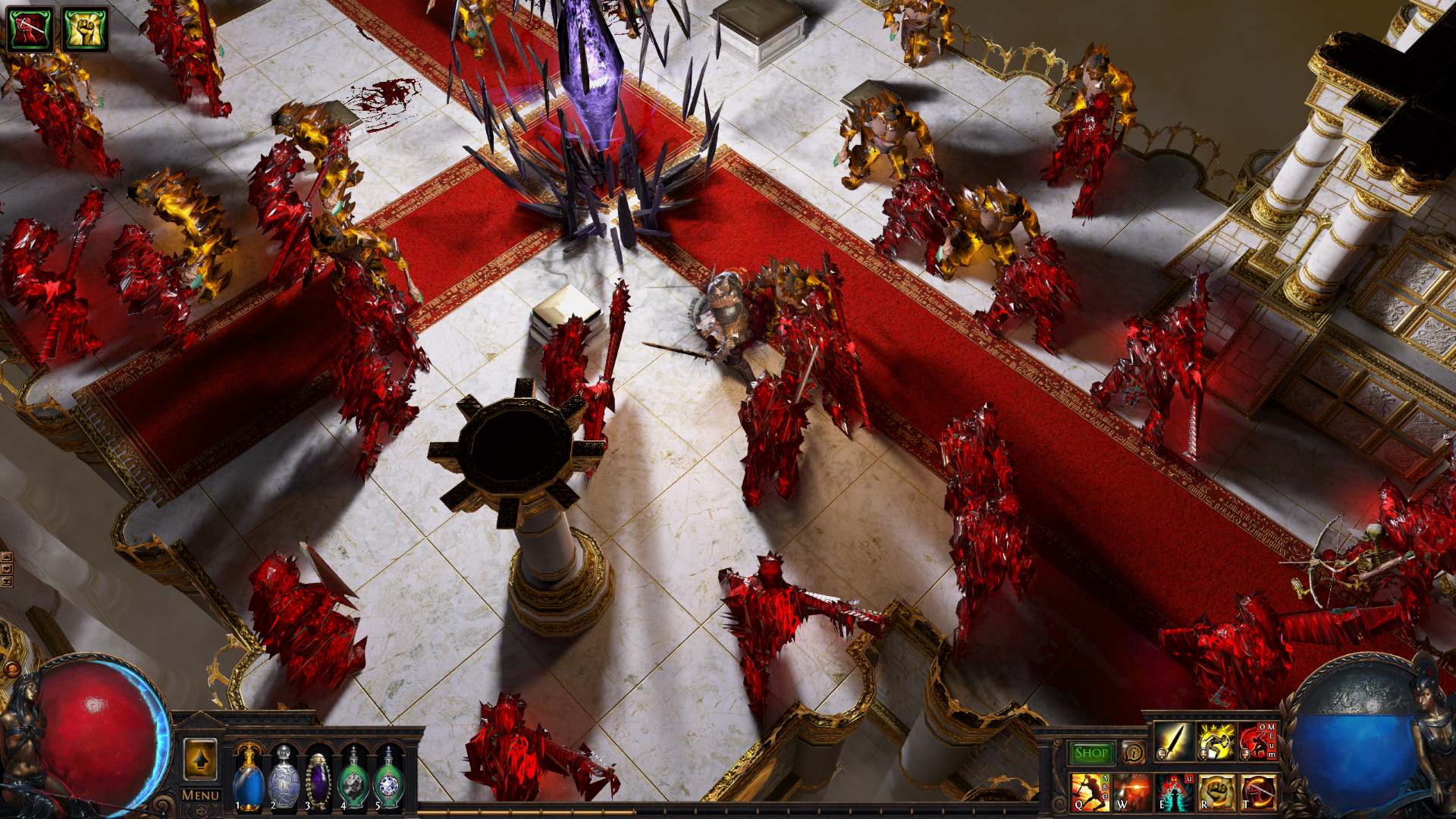 The upcoming melee overhaul - a permanent change - is a big deal. It should hopefully make it as satisfying to smack people with hammers as it is to rain fire on them. Melee attacks will hit multiple close-together targets, and are more responsive, letting players cancel out of attack animations at both their beginning and end. Movement skills now activate instantly. This means that you're much more mobile and able to physically dodge oncoming attacks instead of just tanking everything with your face. It should be easier on your mouse too, as holding down attack will automatically switch targets once one is dead.

To balance these sweeping buffs out, Grinding Gear have gone back and given the game's earlier enemies a vaguely Dark Souls-inspired (their words) rework. Attacks now hit significantly harder, but are more telegraphed, giving you a chance to dodge out of the way. Perhaps not as cool as the dodge-roll button Diablo 3 got on consoles, but it'll do. Beyond that, attack animations have been overhauled to look more varied and still move smoothly when your attack speed goes through the roof. They've also removed the 95% accuracy cap, so it's possible (with high enough dexterity) to avoid 'critical misses'. 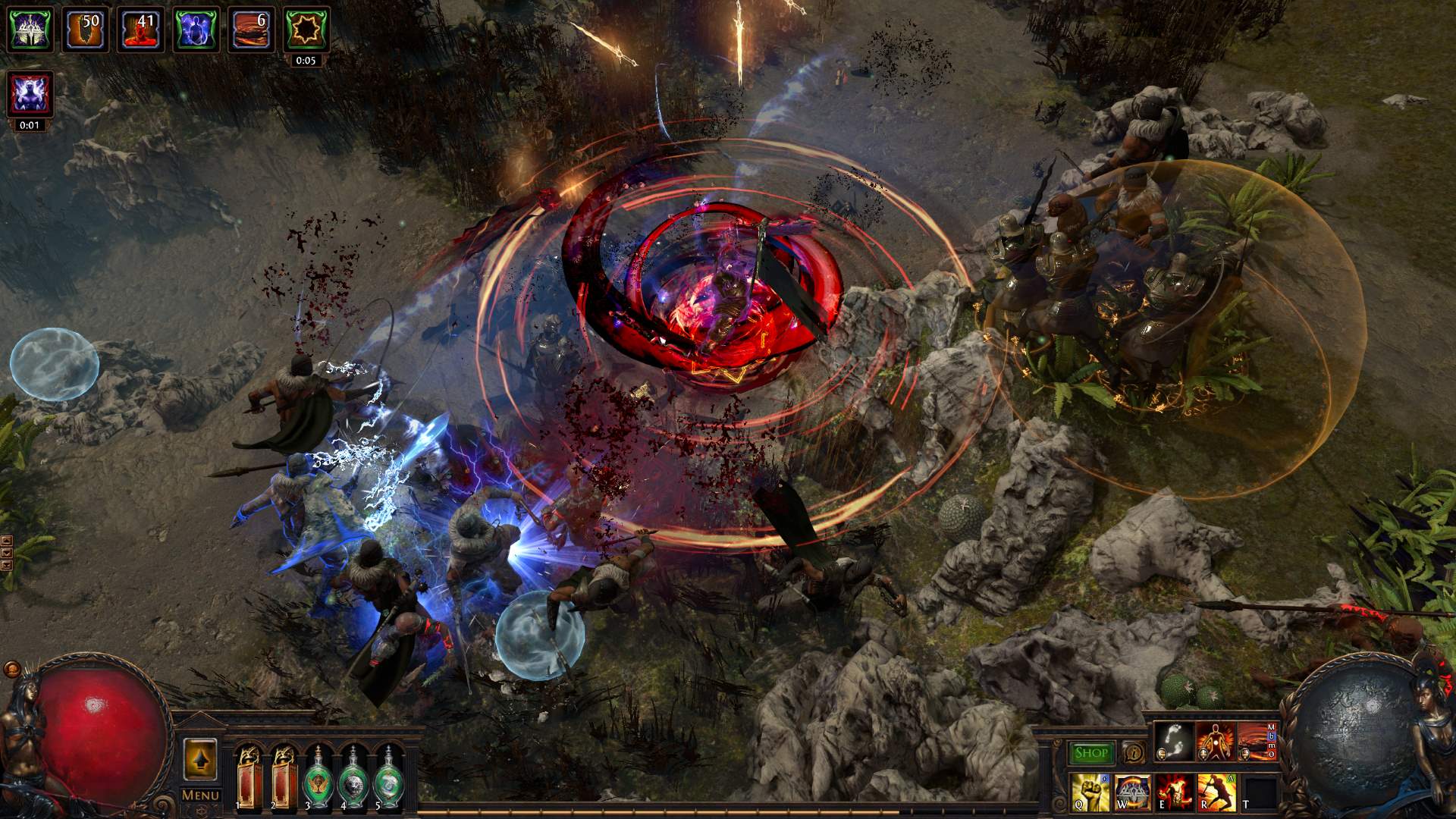 Some of the new loot and skills coming in this update look fun. There are two new 'archetypes' (suggested builds) that Grinding Gear are adding new skill gems for: The Blood & Sand Gladiator and the Rage Berserker. The former has attacks that switch between two stances with different properties, while the latter gains major buffs so long as you can keep a single kill-combo going. Among the new unique items is Aunkuna's Will, a pair of gloves that lets you summon zombies without needing corpses on the ground. Better yet, they count as corpses compatible with spells like Detonate Dead. My brain itches at the possibilities just from that one item.

The Legion update launches on June 7th. You can see its official page here with more details, with full patch-notes coming later. Path Of Exile is free-to-play, available direct or via Steam, and aside from cross-character stash expansions, all the stuff you can spend money on is cosmetic.