The mutant spider queen ripped through another building and I knew my team was dead. This didn’t bother me, I’ve played enough of nu-XCOM to accept the loss of humanity’s last hope. But there’s something more unsettling than being impaled by a large arachnid in Phoenix Point. Its the game’s uncanny and unnerving resemblance to its XCOM cousins. It’s like seeing a doppelgänger of your mate suddenly appear behind him, walking to the bar. You sit there stuttering, looking over his shoulder, wondering who's really sitting in front of you.

I'm not the only one to remark on this similarity. At one point during my playthrough in the halls of GDC, two developers from Firaxis – the developers of XCOM: Enemy Unknown and its sequel - appeared behind me like phantoms. They stood there watching the massacre unfold. “Looks good,” one of them said, pointedly. “I like that line-of-sight thing.” I stood between the developers of both games, controller in hand, and felt like a guest at an awkward family barbecue.

There are differences, of course. The story is an aquatic interpretation of the apocalyptic B-movie threat. A microbial mist is spreading across the globe, creating mutant hybrids of sea creatures that want to wipe out humankind. But more important than the tale are the changes to the combat. That “line-of-sight thing”, for instance, is fresh. When you hover your mouse around the map, contemplating where to move soldierman Billy Bigarms (as his customisable name will surely read), you’ll be able to see shimmering blue lines which reveal the enemies you could target from that particular spot. A line will also turn red to show you if an enemy will be flanked, making it easier to consider possible vantage points at a glance. 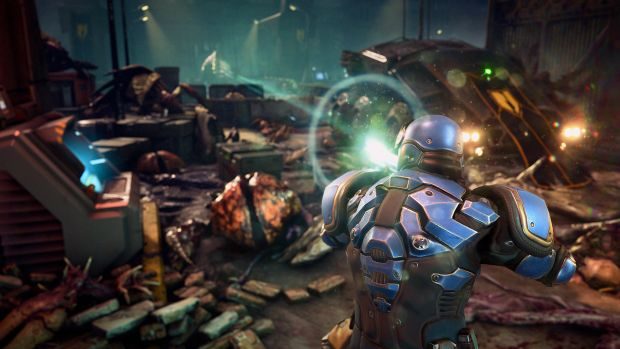 This small but useful change seems to be representative of the game’s attitude to its XCOM brethren. It doesn’t seek to make sweeping changes to the machine. It just wants to add a cog here, a spring there. Small, workmanlike alterations to a device that already functions perfectly well. At least, that's how it appears in the midst of a fight. It took me less than a minute to feel comfortable on this battlefields, and all the controls - camera rotation, soldier swapping - were identical to Firaxis' alien stompers.

This attitude of incremental improvement is part of an odd relationship that’s arisen between Firaxis and Snapshot. Jullian Gollop and his team at Mythos may have invented XCOM back in the early nineties, but Firaxis re-invented it, putting Gollop’s new studio in the odd position of building upon a design that was already based on his own work. Imagine being asked to renovate a church, knowing that it was built on foundations of an even older temple you built yourself decades ago. A lot of people would be so affronted by this new religion, they'd want to knock that church down. Gollop wants to refurbish the steeple.

Other differences are hard to notice at first but they’re pointed out to me by Snapshot co-founder David Kaye. Bullet trajectory matters here, he says, so a lamp post or a crumbling wall between you and your target will sometimes get in the way. Which means there is an element of aiming down your sights, or at least making sure your firing line is clear before you put Sally Shotgun in harm’s way for the sake of an opportunistic shot at a shielded crab man.

Each unit also has limited “willpower”, a row of blue pips next to the character’s health. You need a certain amount of these to use special abilities, like using a jetpack or dashing into cover after taking a shot. Even going into Overwatch (yes, it's called Overwatch here too, so strong is the flavour of XCOM) will require a certain level of willpower. But willpower can be diminished by “serious injuries, death of a comrade or facing terrifying monsters”. You can refresh each soldier’s willpower by resting for a turn, killing enemies or achieving mission objectives. In my demo, reaching a control room gave one of my soldiers three willpips back – not exactly a windfall and not enough in my mind to make the suicidal dash for this room worth it, but in other circumstances it may have made all the difference 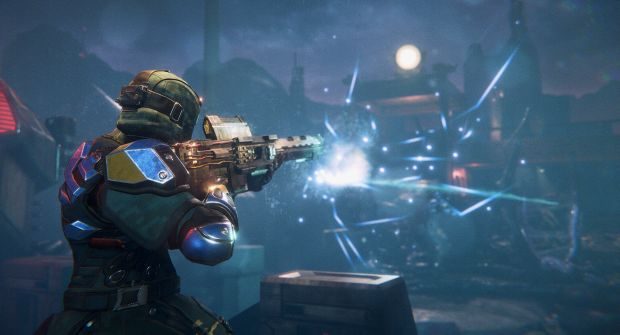 Oh, there’s also the limbs thing. When targeting an enemy (mutant crab, rotten gunman, quite-large spider) you get to aim at specific body parts, a la the VATS system of the modern Fallouts. Damage the leg of a crabbie and he will be unable to scuttle long distances during his turn. Blast the arms of a decaying muto rifleman and he’ll be unable to lob grenades at your squad mates. There is a trade off here, however. Your soldiers are all susceptible to the same injuries. Riley Rocketlauncher won’t be able to do his job with two busted biceps.

This was how it went for me. I’d stormed the gates of an enemy stronghold that was covered in goop and the remnants of civilisation, judiciously killing the crab boys that tried to stop me. But once inside, things went sour. The spider showed up, a tank of health and horror, and soon all my troops were legless or bleeding out (the bleeding status causes you to lose one unit of health every turn, like the poison of XCOM). My last surviving soldier scaled a nearby building and the spider queen stomped in pursuit, turning half the edifice to rubble. Finally, my sniper took an ultimate shot at the spider’s head, which exploded. Hooray! Wait. Not hooray.

The spider didn’t die. It just stood around, headless and angry. Then two crab boys appeared on either side of me and poked me to death with their pincers. A sorry end for my heroes. In the final game, enemies will be designed to “mutate” from fight to fight, adapting to the methods you use to defeat them (see the GIF here for all the possible combinations of crab boy that might appear). In the end, it didn’t take any special adaptation to finish off the New Jericho squad.

These gung-ho troopers (rest in peace) are a sample of the soldiers you’ll get, says Kaye. There are three factions in the overworld. The hippy dippy Synedrion, the militaristic and prejudiced New Jericho, and a tech-loving cult called the Disciples of Anu, with your own Phoenix Project presumably acting as the mixing bowl for all of them. Although recruitment and co-operation seems to be the goal, you can end up fighting against the other factions because of decisions you make in the overworld, the Geoscape. 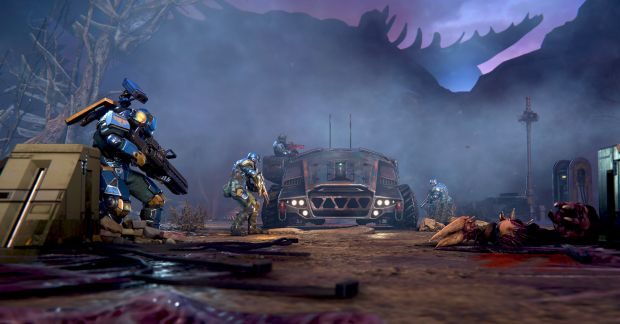 And that’s the part of Phoenix Point that’s still shrouded in microbial darkness. I didn’t get to see what the management side of things looks like at all, but was told “it becomes more like Civ at that point”. Considering the similarities to nu-XCOM in every other respect, I’d be surprised to see it drifting too far from that board game tone of moving a piece there, picking up money here, accepting a mission over there, and so on. But perhaps we should also expect some glittering new cogs to throw us off.

I stepped away from my mission a failure, a victim of the giganto-spider (can you believe that scoundrel Matt says he defeated it? Propaganda, if you ask me). But I did get an understanding of the game’s closeness to its Firaxis relations. How much the final game resembles XCOM: Enemy Unknown and XCOM 2 will have a big impact on how it comes together. Right now it’s uncanny, despite the small tweaks. That’s fine for those seeking a familiar crack at a humanity-threatening menace but there’s also the risk of tinkering with a near-perfect machine in such a way that it falls apart because of some tiny-yet-vital alteration.

Or it might solve a bunch of problems we never knew existed. Who knows? Like its mutant enemies, Phoenix Point is still evolving out of sight. I’m keen to see it emerge from the mist.