The world's deadliest stag and hen weekend holiday company are introducing the final three features for a truly unforgettable night of deadly banter: a foolish ride in a novelty vehicle, daft pyrotechnics, and climbing onto the roof of a restaurant. The next Playerunknown's Battlegrounds update will add an amphibious boatcar, make the vehicle-refuelling petrol cans explode when shot, and let us grab onto ledges in mid-air to haul ourselves up. Oh you'll be stumbling down the church aisle with one leg in a cast and your jaw wired shut, I see you. But at least it's also adding Apex Legends-style contextual text messages to point out places and items, so you'll be able to ping her hand with an "I do."

Those are my favourite parts of the battle royale shooter's Update #30, which launched on the test servers today so will likely go live in the main version for everyone within a fortnight or so.

The amphibious boatcar is sadly not one of those bright yellow Duck Tour busses you see in London, but a BRDM-2 military vehicle. It's an armoured vehicle called in as a drop by flareguns, replacing ye ye olde plated Uaz. You can't shoot out the windows but you can shout "LADS LADS LADS" while driving this hunk o' steel through the explosions of the red zone. 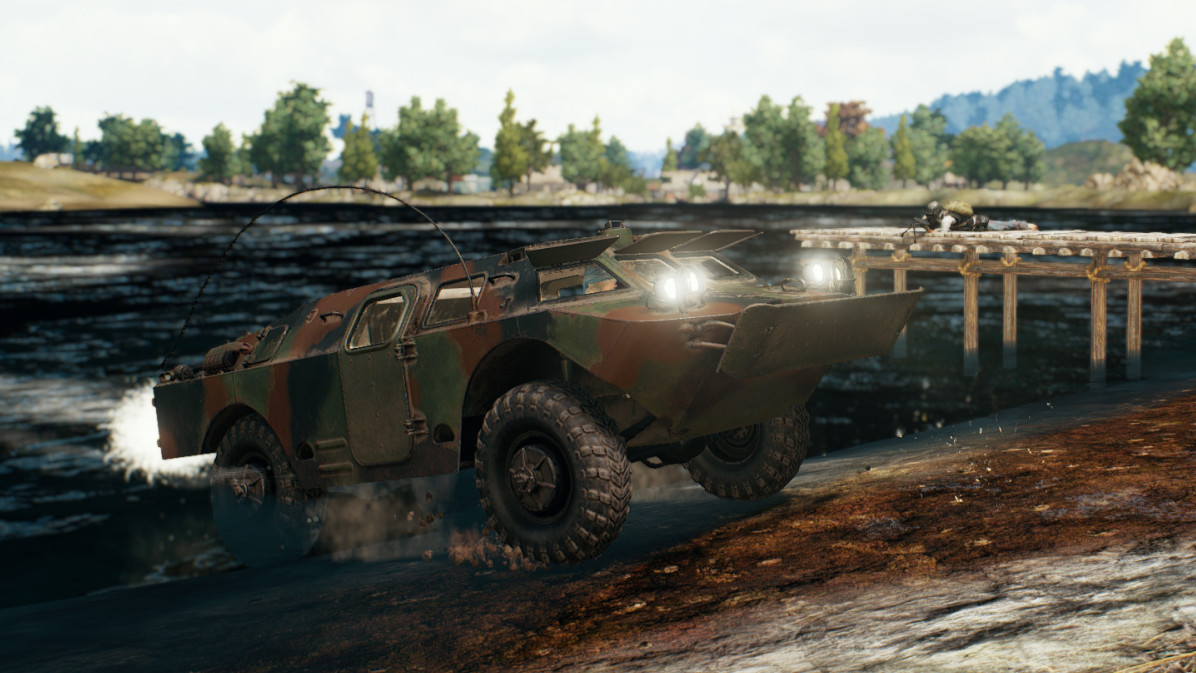 I am delighted to see petrol canisters find a new use. I always carry one, just in case, and now I'll be sure to carry several - especially now they'll stack in your inventory. It's a simple sort of trap: drop a can, shoot it, and watch it blow. What I most like is that it makes a weapon out of an item that 19 months of play have taught me is some harmless junk I can ignore. Please next make chairs and bushes some manner of deadly trap too, make me terrified to go near anything.

I am even more delighted to see mantling (or "ledge grab," as developers PUBG Corp call it here). The addition of climbing and vaulting back in early access opened the world up in new ways, and being able to leap and grab on higher-up places sounds even better. The devs say we can grab onto things up to 2.5 metres high, getting into new places.

You've not lived until you've seen a show-off scramble up the side of a phonebox, leap towards the awning of a WH Smith, grab it, haul up, and then, while doing a celebratory dance, fall off and shatter their ankle. That can be us now, lads.

When we are shambling wrecks, at least we'll get to communicate a bit better. Like the handy chat of Apex Legends, it offers quick ways to send text messages alerting teamies to the location of enemies and items as well as requesting ammo. That's good, that.

Oh, and for nerks they've added a Desert Eagle pistol. The gun from the movies, y'know, and the video games.

The main thing is: this has me fired up to round up the laaads again and get amongst it. See the patch notes for the rest.