Sanhok, Plunkbat’s third battleground, is set to launch on Friday. It’ll be accompanied by an update that will make performance tweaks, throw new weapons into the mix and update the UI. The map’s the smallest of the trio, so matches should shorter, but since you’ll still be duking it out with 99 other players, expect the actual battles to be larger.

Take a gander at the trailer below.

I’m all for maps that condense the last man standing experience, especially when I’m flying solo. If I don’t have anyone to take my mind off what can often be an uneventful march across a huge map, I usually call it quits after a match or two. At 4km x 4km, Sanhok is one fourth the size of the other two Plunkmaps, so exhausting marches are out.

The significantly smaller size has inspired other changes, too. The bluezone, for instance, has shorter waiting times and longer travel times, and it’s dynamic, checking player numbers before picking the next circle. Item spawn rules have also been changed, helping players gear-up faster. ARs, SMGs and DMRs spawn more frequently, and spawning in general has been increased by 5% compared to the fourth and final testing phase. 8x and 15x scopes are also no longer available to find in the wild, but you can still get them from care packages.

If you played during the testing phases, you’ll already be familiar with some of Sanhok’s locations, but the launch announcement also offers up a quick primer on the most interesting tourist attractions the island has to offer. We've also got our own Sanhok guide focused on helping you survive the claustrophobic island. 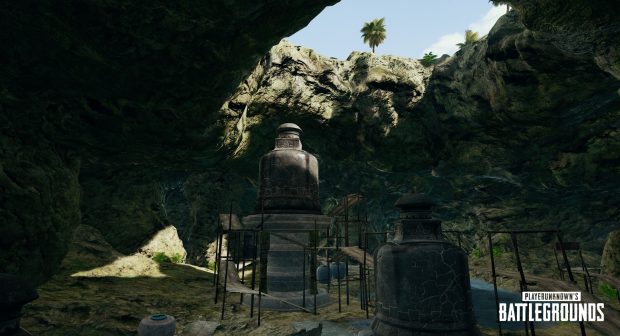 I suspect it will be the map's striking cave that catches most people’s eye. The cave is an abandoned archeological site, but a massive hole in the ceiling offers entry to brave skydivers. “Parachute in through the open top for access to the best loot and a boat for a quick escape,” the developer suggests.

It’s not the only place that’s great for a spot of sightseeing and looting. The ruins are a bit on the dangerous side, warns the primer, with cramped spaces forcing explorers to engage in close-quarters brawls. You’ll be able to sneak your way inside by using the tunnels, but if you’re confident, you might want to drop in from above, guns blazing.

After a busy day, delving into ruins, you can take a load off by visiting the island’s one and only luxury resort. There’s a lovely courtyard with an elephant water feature, plenty of rooms and lots of places for killers to lie in wait.

Sanhok and Update 15 will arrive on June 22. In the meantime, take a gander at the patch notes. The patch is also available in the test server, along with the new island.