As pretty as the Erangel makeover headlining the new Playerunknown's Battlegrounds patch is, and it is both nicer and more noticeable than I'd expected, that's not what I've most enjoyed. No, the true joy of Update 4.1 for me is being able to heal while walking and automatically keep applying bandages until my dozy arse is fully patched. Some long-overdue quality-of-life features there. You need to understand I'm too easily distracted by landscapes and sunsets so I get shot an awful lot, and this makeover so far has seen me shot even more for admiring sculptures and wood panelling in the middle of gunfights.

The makeover is both functional and cosmetic. Across the whole map, areas are roughed up with interesting new cover spots, sightlines, opportunities, and all that. And it's pretty! More areas feel more unique, from small things like a wider range of paintjobs on commonly-used buildings to bigger stuff like replacing a vacant warehouse with a wee local museum complete with a plane hanging from the ceiling. That's nice, that. 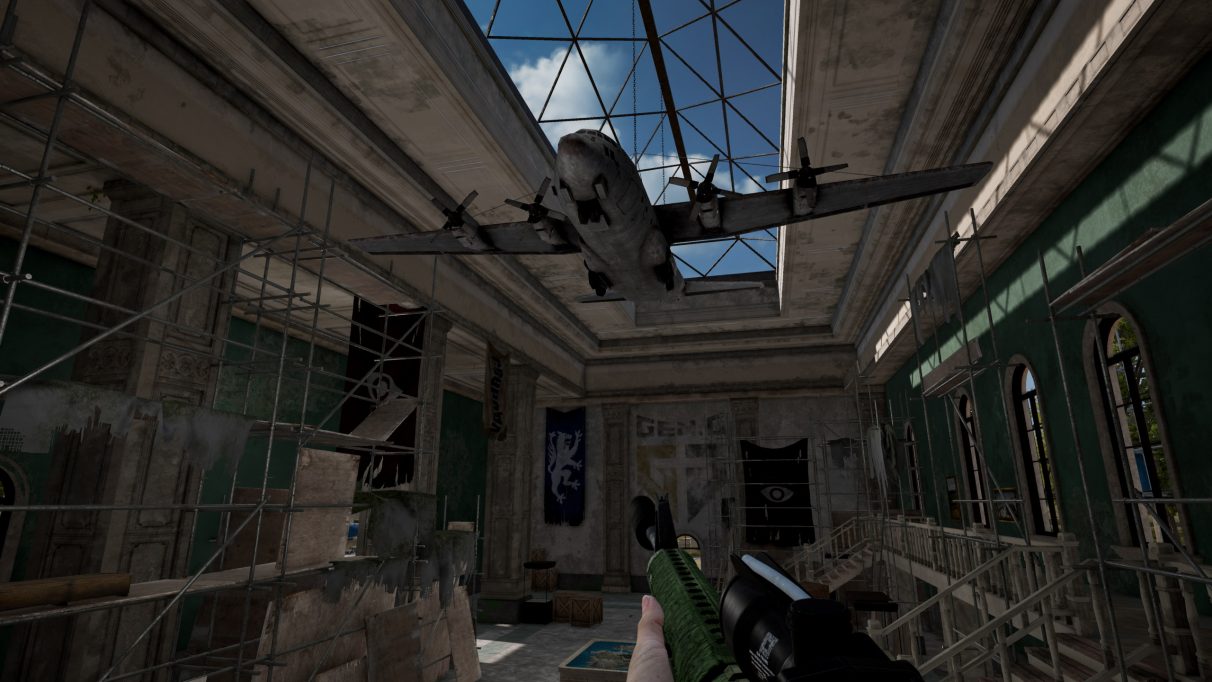 Part of the makeover is also hanging loads of banners and posters manifesting the game's disgraceful retconned backstory. Rather than 100% definitely being about drunken stag & hen weekends getting a bit out of hand, it's now about the survivor of a massacre running murdergames so people can discover their true selves. He's always watching, loving watching folks get murdered, hence all the eye imagery now up around.

Deeper in the gameguts, you'll find fixes, tweaks, and balance changes. A gun's rate of fire is now less affected by FPS, so players with slow PCs should be less weakned and frustrated - but it's not fully fixed, mind. The Blue Zone is now smaller in early stages of the round, the wait time between Zone phases is shorter, and the wall moves slower from the middle of the round onwards. And yes, after starting bandaging you are now able to walk. And you automatically keep wrapping on new bandages until you hit the healing cap, so you won't have to hit the bandage key seven chuffing times.

As is customary for Plunkpatches, some players are reporting this has murdered their framerates, particularly in cities this time. I don't get that myself but, y'know, if you do you're not alone. What a bumpy history this game's performance has, though it's definitely far better now than the earliest days of early access.

This update also kicks off Season 4 of play, with new clothing and weapon skins and things to unlock by playing, a new paid Survivor Pass with even more cosmetics to unlock, and such. The missions propelling us through these progress paths also now have some team challenges, so we our pals can keep dragging our pass towards those rewards even if our body is face-down in a ditch.

See the v4.1 patch notes for more on all this.

The download is now live and a honking great ten gigabytes, so start that early if you want to crank with the lads tonight. Or discover your identity as a murderer who's great at murderers because life is murder, with the lads.

I'll still be treating Plunkbat as an out-of-control stag & hen weekend and you can't stop me. Unless you catch me investigating kitchen decor. In which case you can probably just shoot me in the back.