After seven months of digital drought, the rains will finally return to Erangel in the next Playerunknown's Battlegrounds patch. Now live on the test server and due on the main client soon, update #19 adds variants of Erangel and Miramar with the dynamic 'overcast' weather which drifts between cloud, fog, and rain. I'm so happy to see that return--and spread--after they were pulled for December's v1.0 launch. The patch will also bring long-awaited features including bullets penetrating flimsy forearms, the ability to add a map marker on the point you're looking at, and better colourblind options. But most importantly, rain and fog!

Distinct rain and fog variants of Erangel arrived back when Plunkbat was in early access, but they proved unpopular due to how they changed play and, for some, hampered performance of an already-struggling game. They were pulled before the full launch, and I was disappointed. I always liked how they played, and was glad to see the new small map, Sanhok, introduce them as possibilities in its dynamic weather system. Now that will be rolled out to the older maps in new variants, and Miramar will get the weather too.

Rain provides handy sonic cover for sneaking up on people or simply bum-rushing them, not to mention increases the odds that you might bump into someone you hadn't seen. Fog does that even more, reducing visibility to a few dozen metres at times in a way I find very exciting. I had some excellent foggy encounters back in the day, including tense final circles with a terrifying number of people.

Developers PUBG Corp. have gabbed about bullet penetration for months, and it will finally arrive in update #19. Basically, if someone has their forearm in front of a more-vulnerable bodypart (e.g. the face) and your shot hits their appendage, it'll be treated as if it popped through the arm and hit e.g. the face. No more shots that do frustratingly little damage because someone's ulna got in the way.

Oh, and Erangel and Miramar are getting reworked a teensy bit. The shores of Erangel's island-dividing 'river' will receive more cover in the form of rocks and trees and whatnot, so they're not just barren murderzones, and a few extra small clusters of houses are being scattered around empty areas of the island. And Miramar is getting more dirt roads along with an evening-out of some others, so it's less of a pig to drive around. These two maps do feel more slapdash than the carefully-crafted murderland of Sanhok, made with less experienced, so I'm glad they're still being retouched. 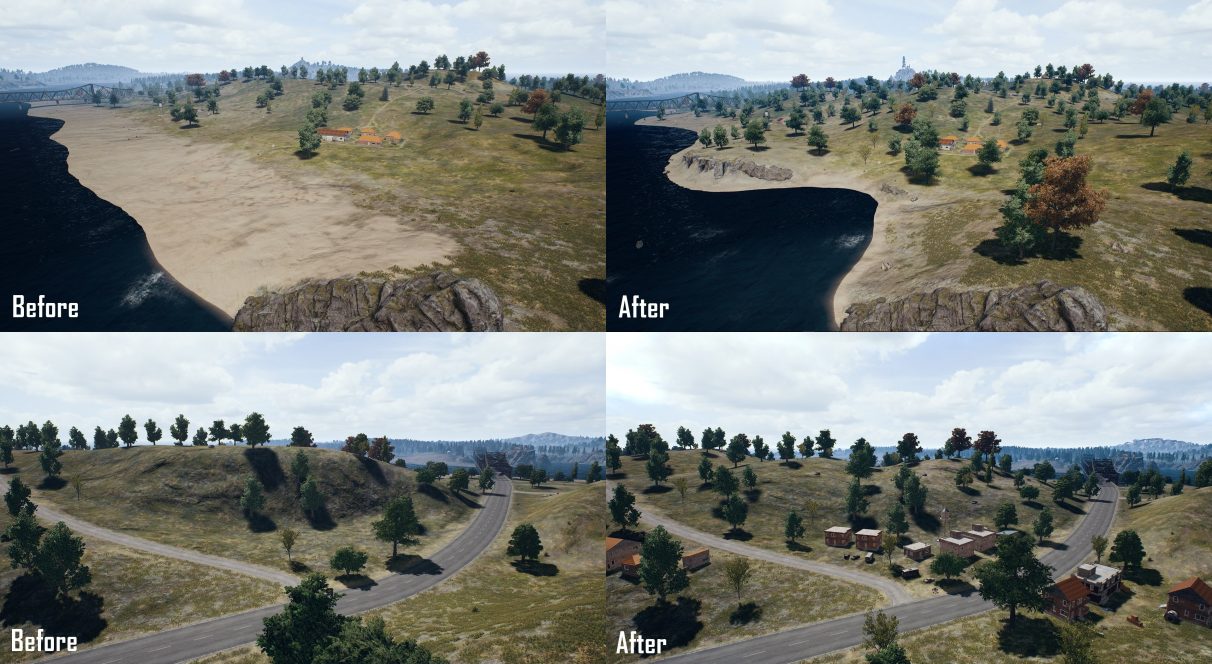 Update #19 will also bring a number of features that aren't flashy but are handy and welcome. Holding alt + right-clicking will drop a map marker wherever you're looking at, so you can easily point places out to pals. Dropping stacks of items is getting a slider to select the quantity, so no more scrambling for your number keys, and alt+right-click will drop half the stack. Replaced weapon attachments will drop onto the floor if your inventory is full rather than refusing to get off a gun, removing frustrating inventory juggling. Alt+right-click on a gun will remove all its attachments in one go too. Plus colourblind options for reticles, blood, and supply smoke, plus numbers accompanying player map markers. And options for setting or removing frame caps. And more minor performance improvements. And... none of these additions is individually mega-exciting, but they're welcome changes and do add up.

See the update #19 patch notes for more on all this. The patch hit the test server today so it should, assuming it follows the usual pattern, be live on the main server real soon.

"Today's improvements are the first step in a re-commitment to improving quality of life, fixing bugs, and making PUBG the best game it can be," the devs say. "We'll talk more about that next week."

Head honcho Brendan "Plunk" Greene recently said that they're currently "refactoring" a lot of scrappy quick fixes they made, re-plumbing the gameguts with long-term solutions that should improve performance and other iffy areas. I'm looking forward to hearing more about that.