Another day, another patch for Plunkbat, that semi-popular game colloquially known as Playerunknown's Battlegrounds to some people called Brendan. It's a game-changer today, making the murder-fields tragically less fashionable, but slightly more functional. From this day forth, no longer will random, extraneous items of clothing be spawned in the middle of otherwise-useful piles of weaponry. End of an era, I know.

The full patch notes for '1.0 Update #10' are rather extensive, to say the least. Getting top billing is a range of changes to how blue zone damage and closure speeds are calculated. The patch notes page has the full alterations in handy tabulated form - it's a bit dry, but the long and short of it is that the pauses between blue zone contractions are reduced, although in later phases of the game the actual movement of the Blue Wall Of Deathfulness will be slower than you remember.

That's not to say that slower means safer. The final three phases of the game are increasing the killularity of the Smurf Sector, with the ninth and final phase of any given match dealing a honking great 14hp of damage per second you're caught outside. Still, the biggest deal for many is the removal of clothing spawns, along with some other tweaks to item spawning. While you can still dress up your avatar as you see fit between games, the moment you're on the battlefield, the only thing you'll be putting on is helmets and flak jackets. 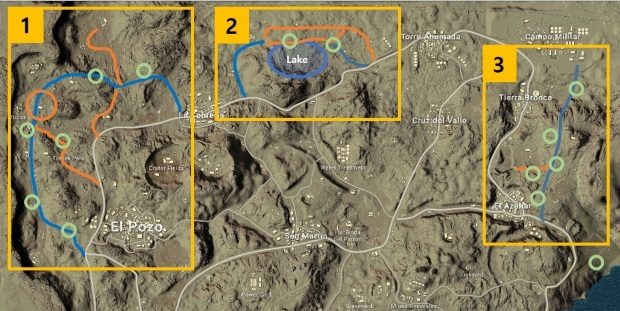 The removal of clothing from in-game spawns is a double-edged sword for sure. On one hand, you'll no longer find yourself desperately struggling to pick up a gun when all your character wants to do is switch between two nigh-identical pairs of jeans. On the other, you'll not wander into a building dressed like you've just fallen out of bed, and walk out clad in the finest 21st century combat chic. Leather dusters never went out of style, but now you're going to have to either win them in post-match loot boxes or pay top dollar to snag them from another player.

Last of the major changes this update is a variety of improvements made to the northern half of the Miramar map. A new oasis here, a new village there, some new roads and dirt paths and a handful of additional car spawn locations. They also claim to have reduced GPU load when looking at buildings at mid-range, presumably through some LOD or occlusion-based jiggery-pokery. To further encourage players to gravitate towards this half of the map, the patch notes promise higher-tier weaponry being more likely to spawn in a few key buildings.

There are a few more tweaks introduced in update 10, such as tarp and carpet materials now generating footstep noises, indoors plants losing their all-natural bulletproof properties, as well as some tweaks to the team invitation interface. You can read the rest of it here.