In the ongoing war against lag in Playerunknown's Battlegrounds, the developers are considering a soft form of region lock to stop distant players lagging up other regions' servers. Should the plan go ahead, Plunkers won't be able to see and play on a server outside their region unless they're in a squad together with someone who is in its region. This still just a potential change at this point, not decided, and still a way away.

A lot sooner, weapon skins are coming to Plunkbat. The next update will add them in two new crates, one of which requires a paid key to open. They are mostly ugly.

The devs recently started factoring ping into matchmaking to help provide stable games, which they say "has shown great results", but now they're considering doing more. Today's announcement laid out one possible plan:

"One of the solutions we are considering is operating servers so that only those players who reside in that region can connect and play. These servers will be made invisible to players residing in other regions. But, at the same time, if a player in an exclusive server region forms a team with a player from another region, they can connect to and play on any of the servers available to either of them.

"Through this new approach we are aiming to provide a better gameplay experience as it will improve network issues and help with linguistic barriers. We are going to run a limited test of this approach as more detailed research and analysis should come before global application."

Server region locks are certainly the Plunkbat feature most requested by loudmouths. Look at the comments of any Plunkpost on Steam and you'll find it flooded with people spamming "REGION LOCK CHINA" while scapegoating Chinese players for all the game's ills. Maybe this will make them shut up. I would certainly not take it as validation of everything loudmouths claim about China.

If PUBG Corp do go ahead with this plan, I do hope they have something in mind for players seeking modes not available in their region. Some regions don't have the first-person mode at all and some only have FPP for select squad sizes, apparently because they don't have enough players to support them, so people wanting them need to connect elsewhere.

Right now, cosmetic weapon skins are coming to Plunkbat. They hit the test server today and should go live on the main client later this week. They make guns look a little different, yeah? They still work the same and use the same model, but have been given makeovers. Weapon skins are equipped through the customisation menu in the same way as your starting outfit then, unlike clothes, will appear on all weapons of that type you scavenge.

Two new crates contain the initial batch of weapon skins. The Triumph Crate is in the regular pool of crates you can randomly get when trading your Plunkbucks for crates, with a 20% chance to get one, but you'll need to buy a key with real money (or trade for one) to open it. Yup, having paid crates in the random pool still sucks. The other is the Raider Crate, which appears as an entirely separate option in the Rewards screen, costs 1200 Plunkbucks, and does not require a key to unlock it.

All of the skins I've received on the test servers are uglier than their defaults. The common skins in both crates look like they were painted with orange or beige matt emulsion then thrown down a hill, which is okay as a joke about scavenging and using anything at hand but not attractive. The rarer skins are pristine and far fancier but many are ugly too, with unfocused blasts of colour and pattern, splashing gold, digital camo, plasticky metal, and accents all over.

But hey, most of Plunkbat's clothes are hideous yet some still sell for hundreds of pounds. And this AKM skin is kinda neat: 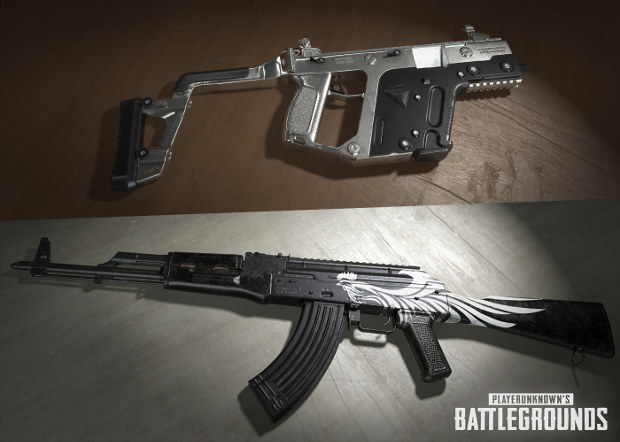