If you click on a link and make a purchase we may receive a small commission. Read our editorial policy.
This is Playstyle Royale, where Matt heads into a battle royale game and is tasked with sticking to his own strange rules of engagement. This time, protecting the arachnids of Hunt: Showdown.

In Playstyle Royale, I normally head into a battle royale game and try to win my chicken dinner while adhering to arbitrary rules. This time I'm playing Hunt: Showdown, which is merely like a battle royale game, and the whole point of today's exercise is to prevent needless animal death. If only more people knew about the vital role demonic spiders play in our ecosystem, I'd have to shoot fewer of them.

People. I mean I'd have to shoot fewer people.

As per immutable Playstyle rules, I've got five attempts to defend the swamp's monstrosities. Each hunt will see either one or two boss critters appear somewhere on the map, and my job is to protect one from the teams that will come a-shooting. 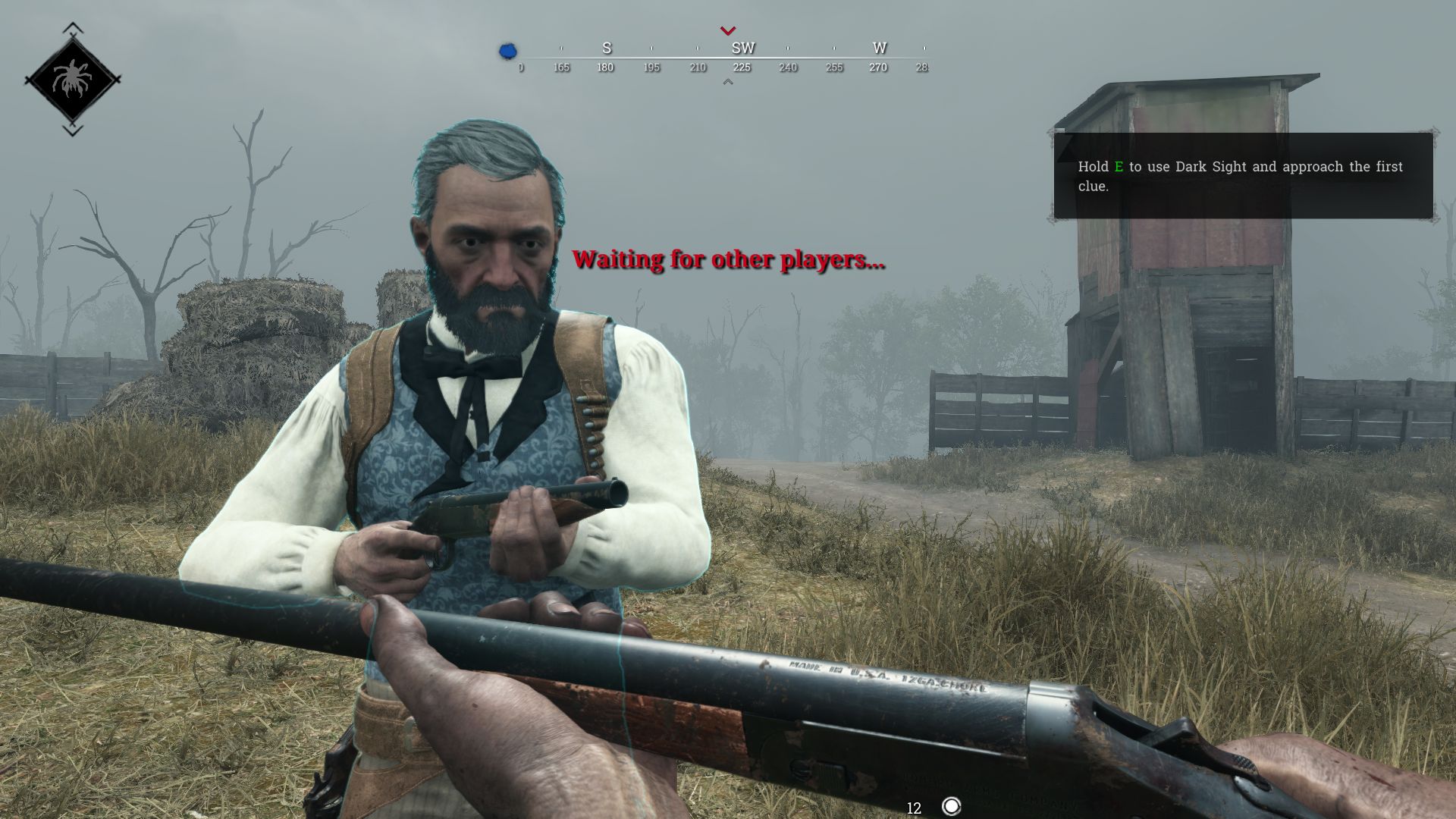 It's also the job, it turns out, of my friend and (freshly recruited) fellow conservationist, Peter. We set out on our first anti-hunt, and I lay down some more ground rules. We're venturing into a precarious ecosystem, I remind Pete. Removing any of the wildlife could have untold consequences, so we must do our due diligence and avoid slaying all but the most common zombie. The awful undead bee ladies could die out! Imagine!

It normally takes at least ten minutes to find a big monster, as I found out before I learnt the error of my hunting ways. You've got to comb the map for clues that lead you to their hidey-holes. This time, though, the swamp clearly senses our pure intentions, and we stumble straight into a spider's lair. Sensibly, we stumble straight out again, and I suggest we take up positions on a nearby roof. I immediately realise we can't go prone and this is a stupid idea, but Pete refuses to get down. I begin to have regrets about Pete.

Before long, two hunters come lurking towards us. They're trying to use the long grass as cover, but there's a five second stretch where it becomes abundantly clear we've seen each other. It's a bit awkward, so I open fire and Pete follows suit. Our target goes down, and his friend legs it back into the woods. With the arachnid safe for the time being, I scuttle over to the poacher in search of better guns. I never get them. 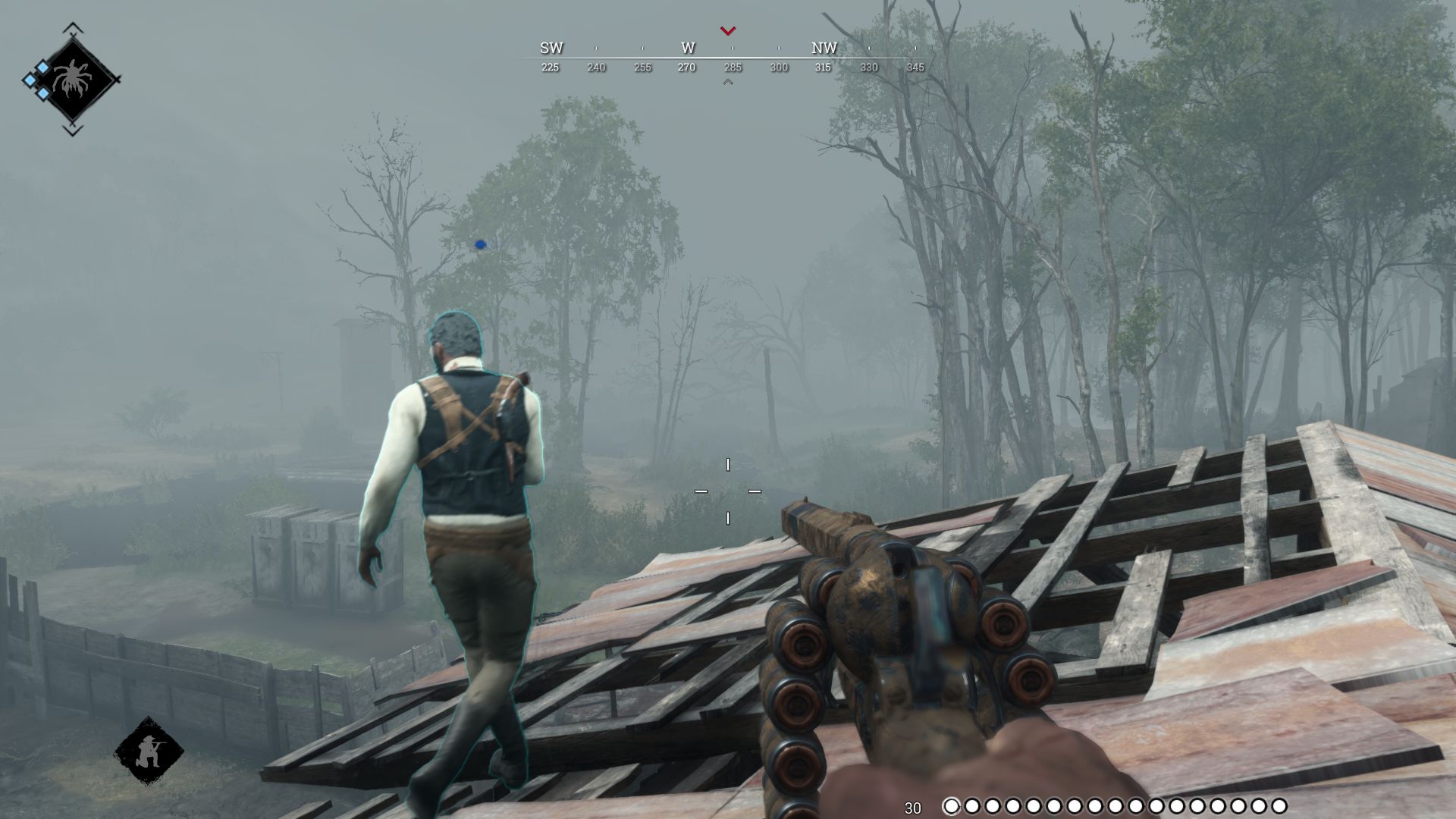 Pete's taken down by anther duo, who have spotted him from some distance away because he is standing on a roof. I've gone too far to go back. I come at the duo from behind instead, felling one with my shotgun before being felled myself by his friend. We have failed.

We come back. The swamp has truly embraced us as its own. On our next expedition, we immediately walk into an Assassin's den - another one of the game's boss monsters. But there's also a spider out there that needs saving, so I insist we move on. Assassins are endangered, but they also have a habit of transforming into clouds of murderous flies. I know true conservationists aren't supposed to yield to human sentimentality, but I also know swarms of murderous flies can get in the bin. The swamp seems to agree, because we immediately find another spider.

We take up defensive positions. Peter kills a bee lady, naughtily. “I just don’t like bees very much”, he says. Five minutes later he is surrounded by bees after climbing up a wind turbine and I am glad. 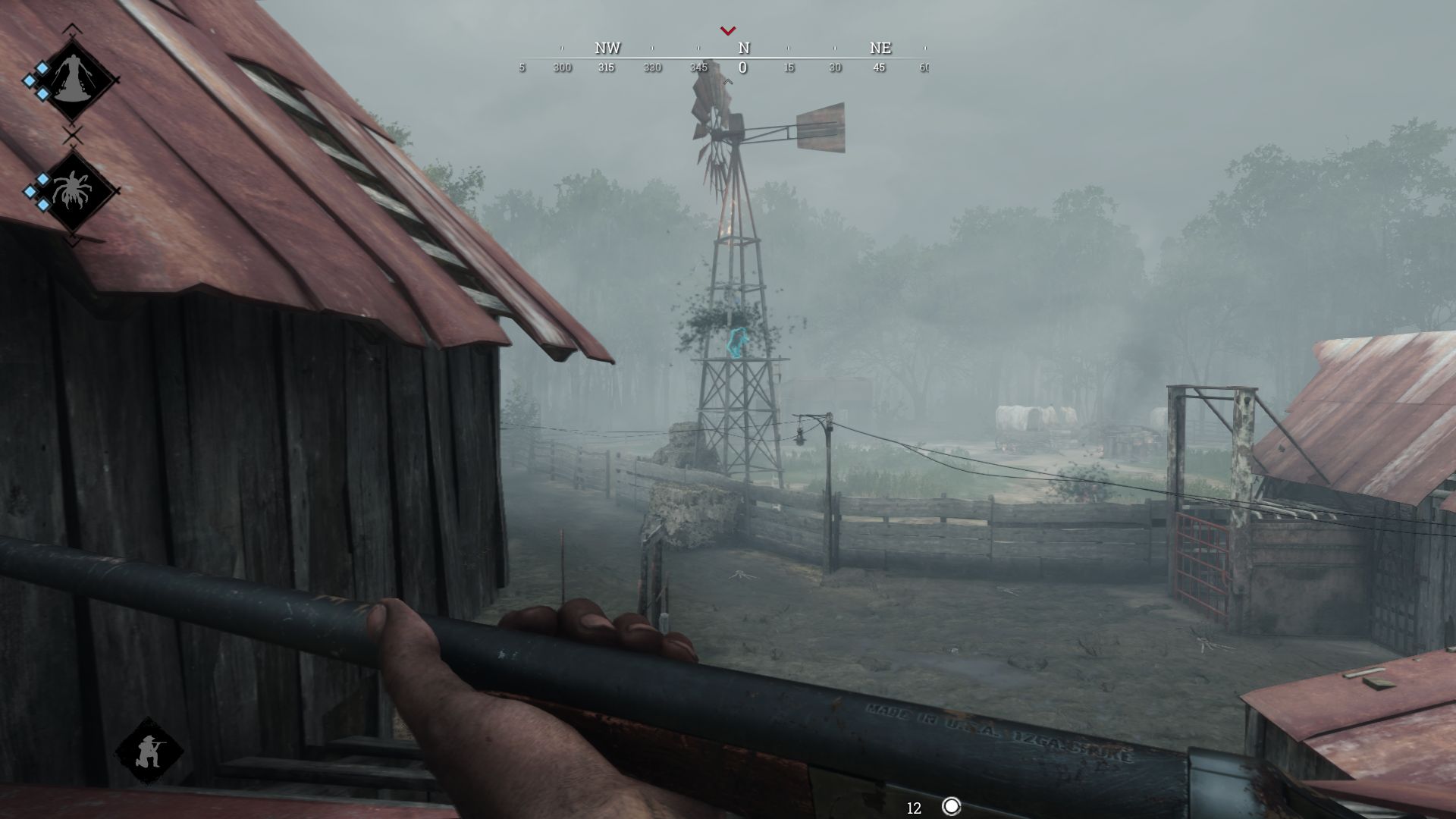 But with the bees comes trouble. Two hunters spring out of the woods and advance on Pete's position, and again, I try to flank. Again, Pete falls, and I'm gunned down before I can get a shot off. So far we have killed several bees and protected zero spiders. It is galling.

Problematically, the first clue we come across is guarded by a grubby armoured fella and surrounded by his cute little 'seeing eye' leeches. Pete tells me I won't be able to sneak up and grab the clue, because one of the leeches will spot me. I ignore him and a leech spots me, alerting the grotesque, cherished flesh-heap to my presence. My attempts to run away are curtailed by an upturned cart. I am stuck. The flesh-heap looms above me... but does nothing.

What stayed the beast's hand? Who can say. Perhaps it gleaned our good intent, caught between an instinct to feed and a more sophisticated urge to grant safe passage to the saviours of the swamp. Perhaps it had a stroke. Either way, Pete stabs it from behind. We roam on. 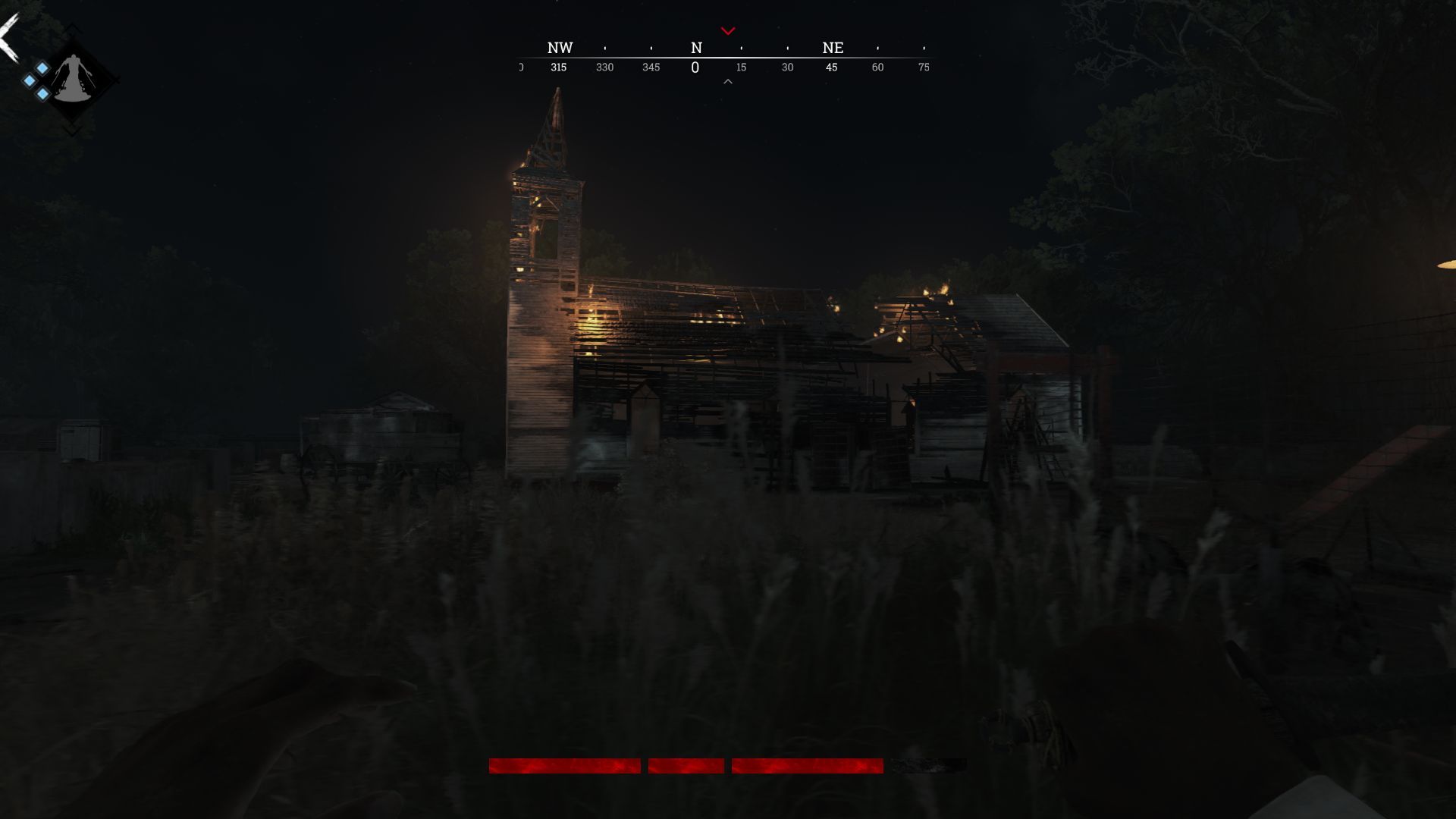 The Assassin is, alas, the only apex predator in town. We're also the first to rock up to its graveyard lair, so I have no choice but to swallow my prejudices. We crouch behind respective walls. We wait.

Everything happens at once. A shot from behind sends me scurrying around a corner, forced to head towards the second gunshot I've just heard. Wait. The third. I've sprinted into a duel between rival hunters, too wrapped up in each other to notice. One of them crumples to the floor, riddled with revolver bullets. His killer doesn't dawdle, which is a-okay with me. I crouch in a corner, wrapping a bandage around my torso. Then, out of nowhere: bees.

The noise must have lured a hive over, and I'm the only one left to pay the price. I sprint back towards the area I was just shot from, a sting or two from death's door. This time, the swamp spares me. The bees dissipate as I duck behind cover. I tend to my wounds, then go on the offensive.

I sweep back round, eyes peeled for swarms, ears alert for buzzing. Nothing - except footsteps, padding about behind a tomb. I climb on top of it, and put a bullet into the Assassin's would-be assassin. The last of them, we decide, after sticking around for a few more minutes. We've done it. We've saved the environment!

I hope it doesn't kill anyone.