If you click on a link and make a purchase we may receive a small commission. Read our editorial policy.
Premature Evaluation is the weekly column in which Steve Hogarty explores the wilds of early access. This week he's murdering giants in Praey For The Gods.

Praey For The Gods was forced to change its name from Prey For The Gods, after Prey publisher Zenimax opposed the new trademark. Their platoon of lawyers, who I can only imagine swung in through the windows of the tiny three-man studio and started furiously tipping over desks and tearing phones out of the walls, were concerned that consumers would confuse this game, about traipsing around a desolate tundra murdering hairy giants, with their game, about turning into a lemon on a haunted space station orbiting the moon.

It was, ironically enough for a game about fighting massive monsters, a David and Goliath situation. But if there were to be any confusion between this game and another, it wouldn’t be with Prey. It would be with the PS2 classic that heavily inspired it, Shadow Of The Colossus. Praey For The Gods doesn’t so much wear its influence on its sleeve, as sneak into its influence’s bedroom to wear its perfume and try on all of its underwear, while strutting around in front of the mirror singing “hello boys, my name’s Shadow Of The Colossus, boop-boop-be-doo”. 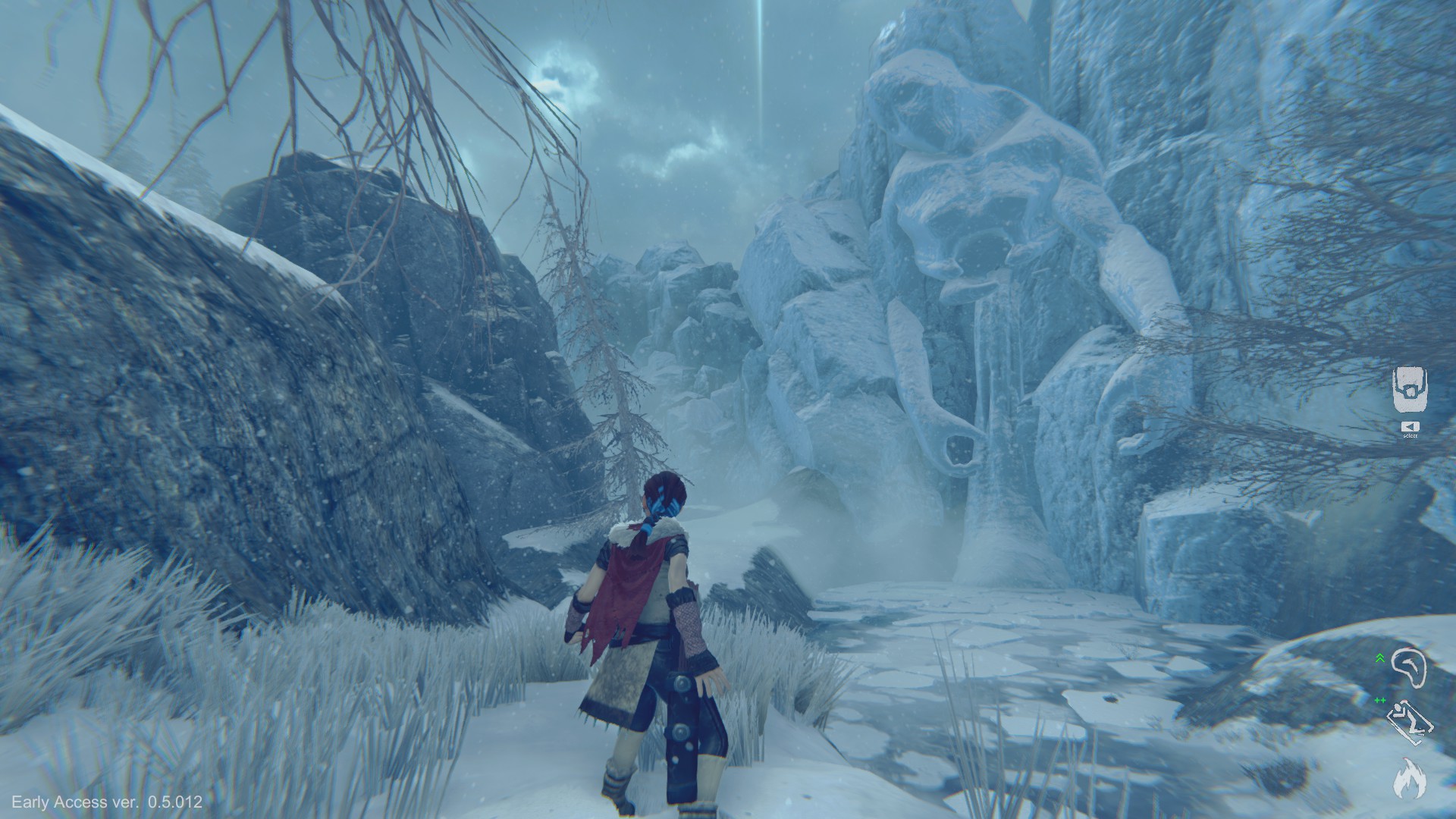 So, Praey For The Gods is an open world action-adventure in which you explore a vast frozen island in search of a bunch of ancient, building-sized gods. Once you've traversed the snow drifts and ice cliffs to locate your quarry, you must avoid getting stomped on while figuring out how to clamber onto their hairy bodies, climbing up their legs and across their backs like a ferret until you can reach their glowing weak points. Managing a depleting grip meter is key to not being hurled to the ground, as the multi-storey beasts will buck and shake and lurch in an attempt to dislodge the you-shaped irritant scuttling all over them. It’s terribly exciting and, testament to the developer’s talent, if not their originality, extremely familiar.

Like Shadow Of The Colossus, there is no dialogue or overt plot to follow. The world is stripped down to a dreamlike minimalism, the voiceless protagonist’s motivations as inscrutable as the very landscapes that lay between you and your prey. Each of the towering monsters defeated brings you one step closer to some unknowable denouement (literally so in the Early Access version, where only the first five can be found and slain) as the world itself seems to respond incrementally to each god’s demise. There is an aching atmosphere of deep melancholy, a lonely iron heaviness that pervades Shadow Of The Colossus, which the developers of Praey For The Gods have managed to deftly transplant into their own game. It’s a mood helped along by a similarly rousing choral and orchestral soundtrack. 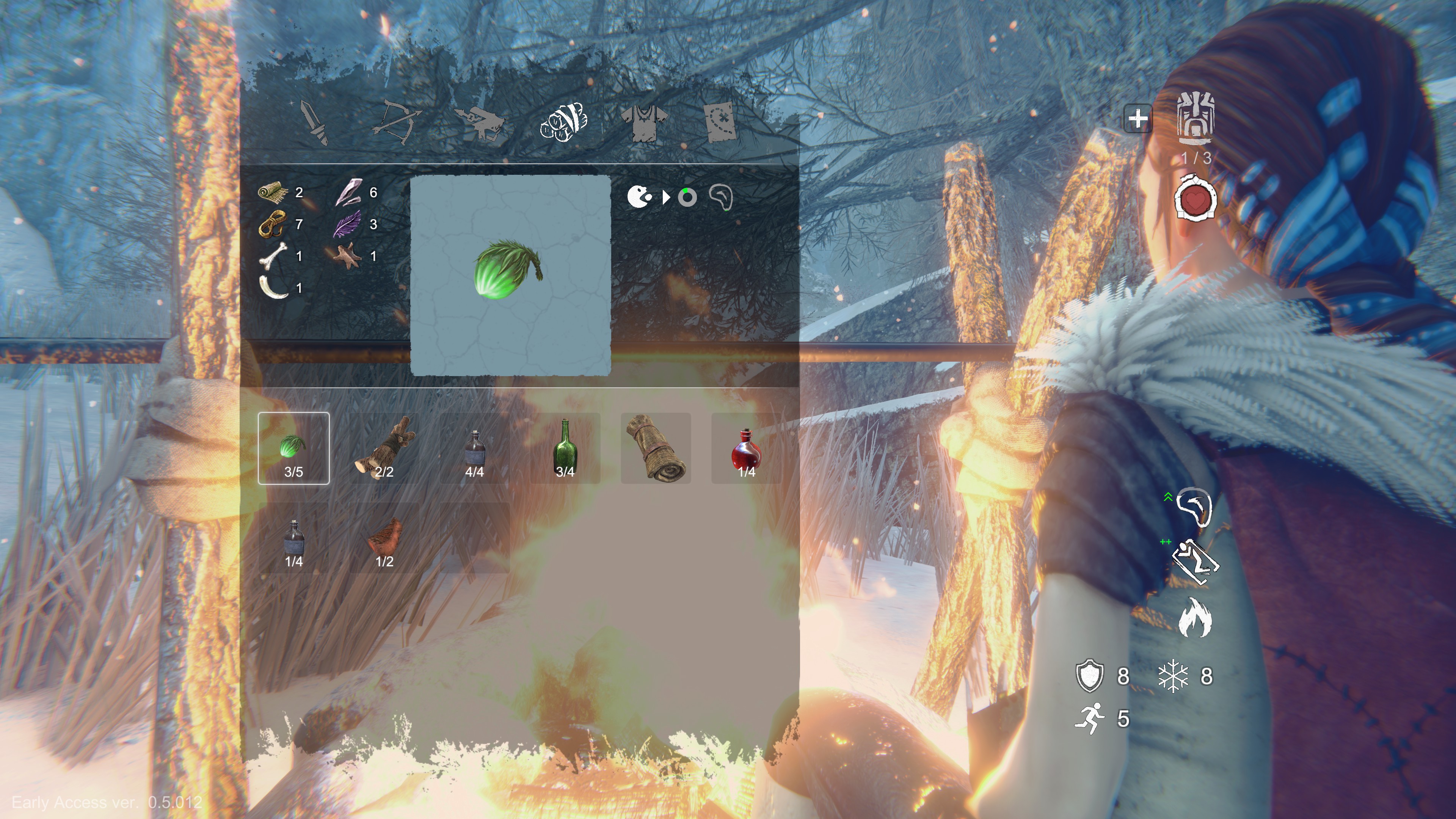 All of this open imitation is no bad thing. Praey For The Gods feels like an affectionate cover version of a cherished classic, with just enough tweaks to give it a flavour all its own. Those tweaks can also trace their inspiration directly back to another, more recently revered adventure game, the latest in the Legend Of Zelda series, Breath Of The Wild. You have a Zelda-style glider, for parachuting down from high places, and a Zelda-style hookshot, for pulling yourself towards distant places. Swords and bows deteriorate as you use them, before eventually breaking entirely. Praey For The Gods even replicates the way Breath of the Wild’s bows explode into a shower of splinters as they release their last arrow. I’m sure, if you looked hard enough, you’d even find rupees hidden in the grass.

There are some fairly involved survival mechanics too, requiring that you find or start campfires to keep warm, hunt wildlife for meat, cook meals and use beds to rest. In this Early Access version these parts of the game feel particularly underdeveloped, and while a full stomach, a toasty bod and a good night’s sleep bestow some helpful stamina buffs, keeping everything topped up only ever feels like an unnecessary distraction from the far more urgent and entertaining matter of colossicide. 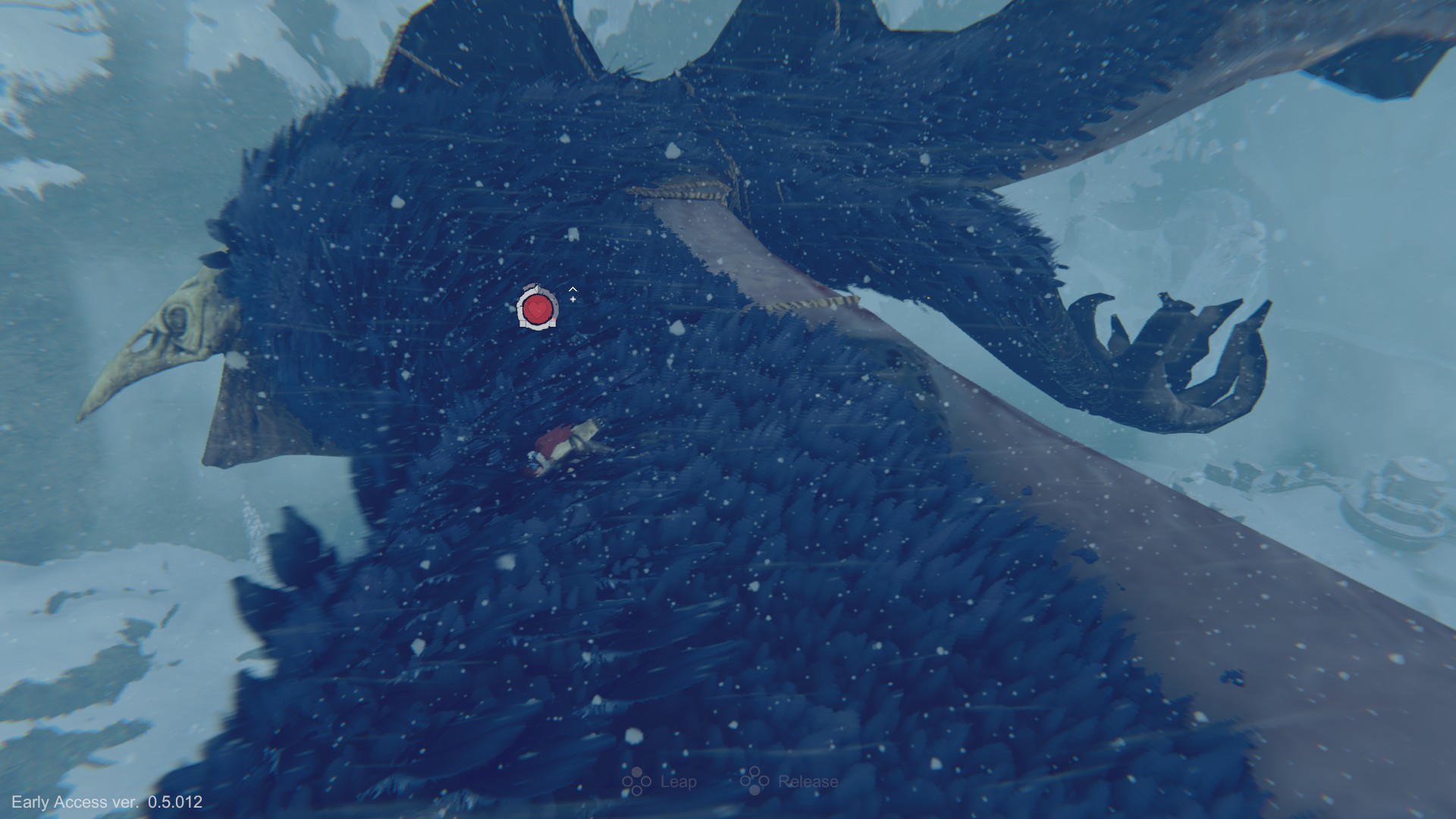 A few other features set it slightly more apart from the games that inspired it: there’s a day-night cycle, and dynamic weather that changes from clear, sunny days to dense blizzards, which both impact on your ability to keep warm. The meticulously rendered snow deforms underfoot in a satisfyingly crunchy way, and the deeper it is the slower you’ll move and the more stamina you’ll consume just getting around. Surviving the environment itself could present a greater challenge in a later version of the game, but right now there’s not enough of it to really cause you any problems.

In perhaps the biggest departure from Shadow Of The Colossus -- a game in which the attack button gathers dust between each boss battle -- there are regular, smaller enemies to fight besides the giants. Not many, just a few undead soldiers springing from the snow here and there, the odd transparent wraith skulking about near a bush, but enough to change the tone and pace of the exploration. Where Shadow Of The Colossus was defined by drawn out and quietly contemplative rides across the game’s yawning plains and featureless deserts, accompanied by nothing but the rhythmic cloppity-clopping of your horse’s hooves, Praey For The Gods is a lot more hands-on during these intervals, more meandering and immediately perilous. 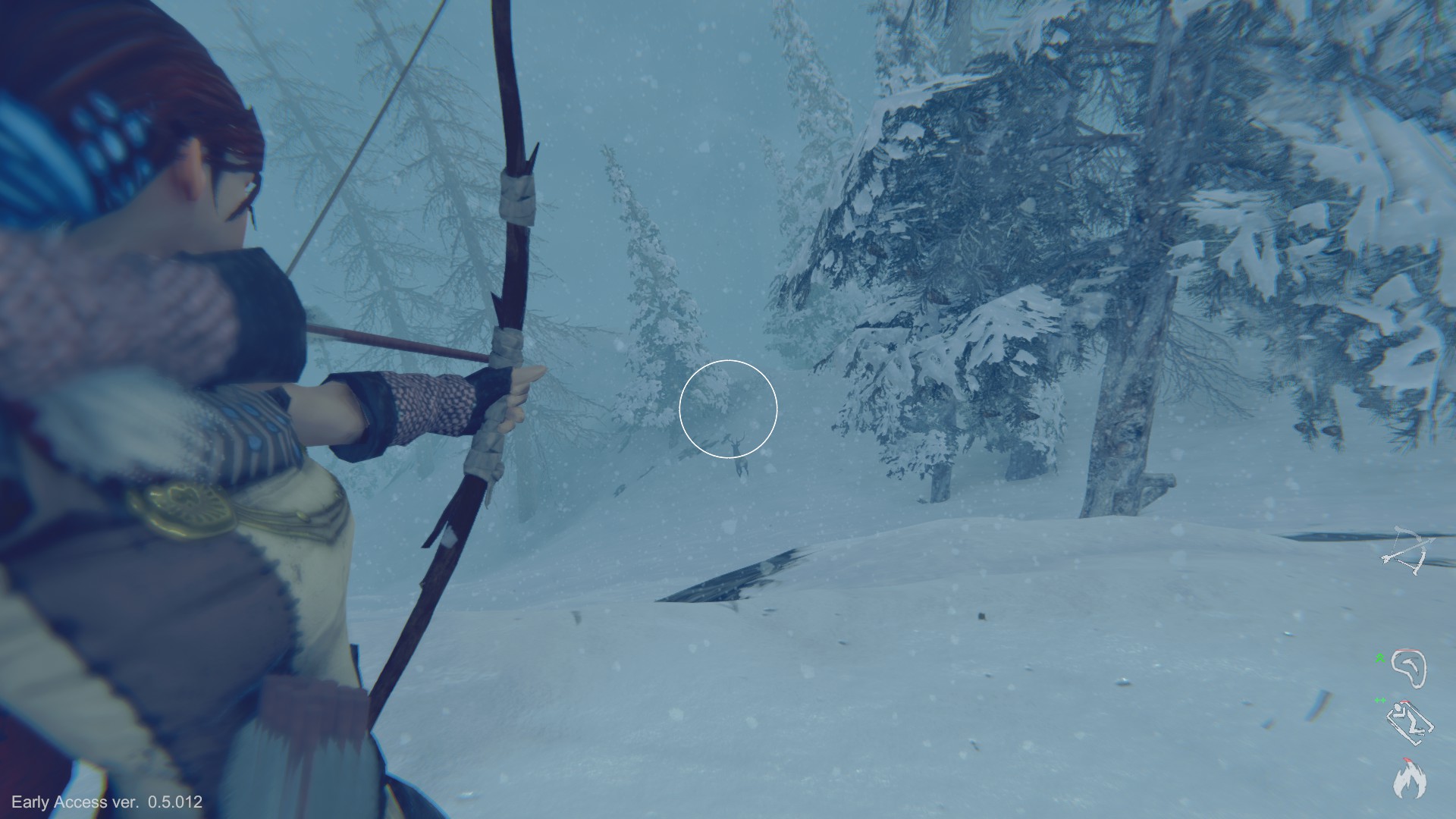 This means there’s more to actually do in this game’s wilderness. Discarded crates contain the various materials needed to upgrade your clothing and improve your cold resistance. There are some temples and caves to be discovered, and multiple routes to the arenas in which the gods hang out, with some puzzles to figure out along the way. In contrast to Shadow’s magical emptiness, Praey’s world feels fuller, more local and more detailed.

Sacrilege, some of Shadow’s more precious fans might say, but I really enjoyed it, and very happily slaughtered my way through each of the available gods in one five-hour sitting. Praey For The Gods is a remarkable accomplishment for such a small team, who have a keener understanding than most of what made their favourite games work so well.