Predator – the furious boy who simply cannot get enough of spines – is up to his old tricks again in this, Predator: Hunting Grounds, a gory and asymmetrical multiplayer shooter from the creators of the equally gory and asymmetrical hide and seek simulator Friday the 13th: The Game. Four human soldiers embark on a mission to do a thing in a jungle, notionally unaware that they are being stalked by an intergalactic game hunter intent on boning them. No, not that kind of boning, get your mind out of the gutter, I’m simply talking about people having their hot wet bones violently ripped from their insides through their face and skin.

Did you know? Much like how the shark in Jaws isn’t actually named Jaws, the Predator is never referred to as the Predator in any of the four hundred movies made about him and his Predator friends. At no point does anyone ever point towards him and say “watch out, it’s only the bloody Predator”. Rather he’s officially known as “the hunter”, a plainer moniker that looks slightly less enticing on a movie poster but more accurately describes the character’s preferred method of doing his big murders, which is less “cheetah” and more “crouched in your neighbour’s petunias at 3am”. 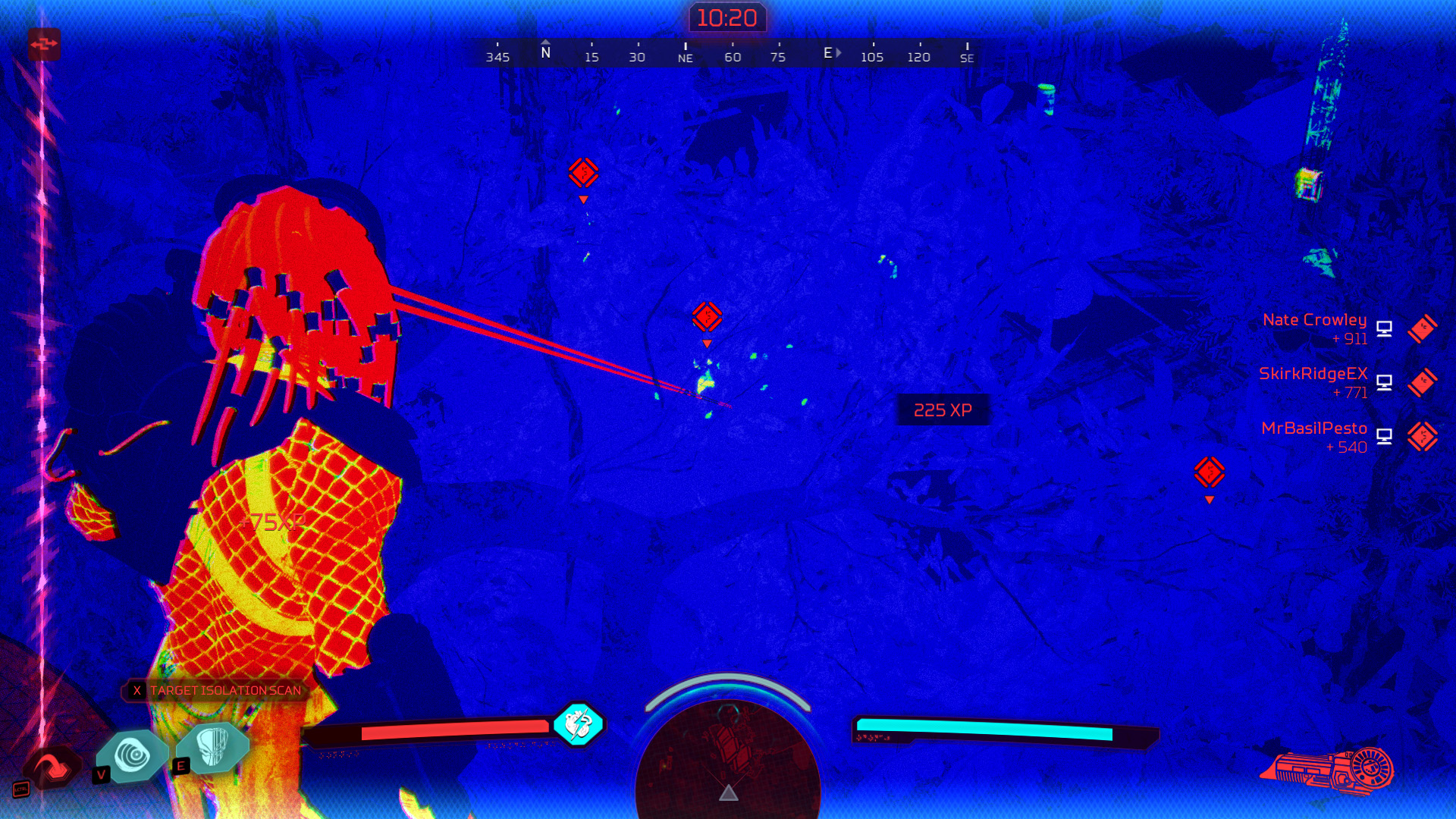 And so it goes in Hunting Grounds, where instead of chasing down soldiers at high speed and biting them on their flanks until they tumble to the ground, you’re patiently skulking about in the canopy using thermal vision to track the footprints, sounds and movements of human players as they go about their objectives. Those objectives have absolutely nothing to do with fighting aliens, instead they’re defiantly terrestrial concerns like shutting down a nerve agent pipeline by pressing F on a bunch of valves, or thwarting the weed growing operation of a guerilla army by finding some of their stuff and pressing F on it. You know, jungle missions. Throw in the persistent distraction of AI controlled enemy soldiers and you’ve got a convincing set of oblivious, prey-like behaviours.

Of course, unless those players weren’t paying any attention during the process of purchasing, installing and navigating the menu screens of a game called Predator: Hunting Grounds, they’ll be acutely aware that you’re somewhere nearby and watching them. And so their job is to stick close together as they carry out their soldierly duties to avoid being picked off one by one, and then to descend into a panic of gunfire and grenades the moment you drop out of a tree to slice them to ribbons or explode them with your shoulder cannon. 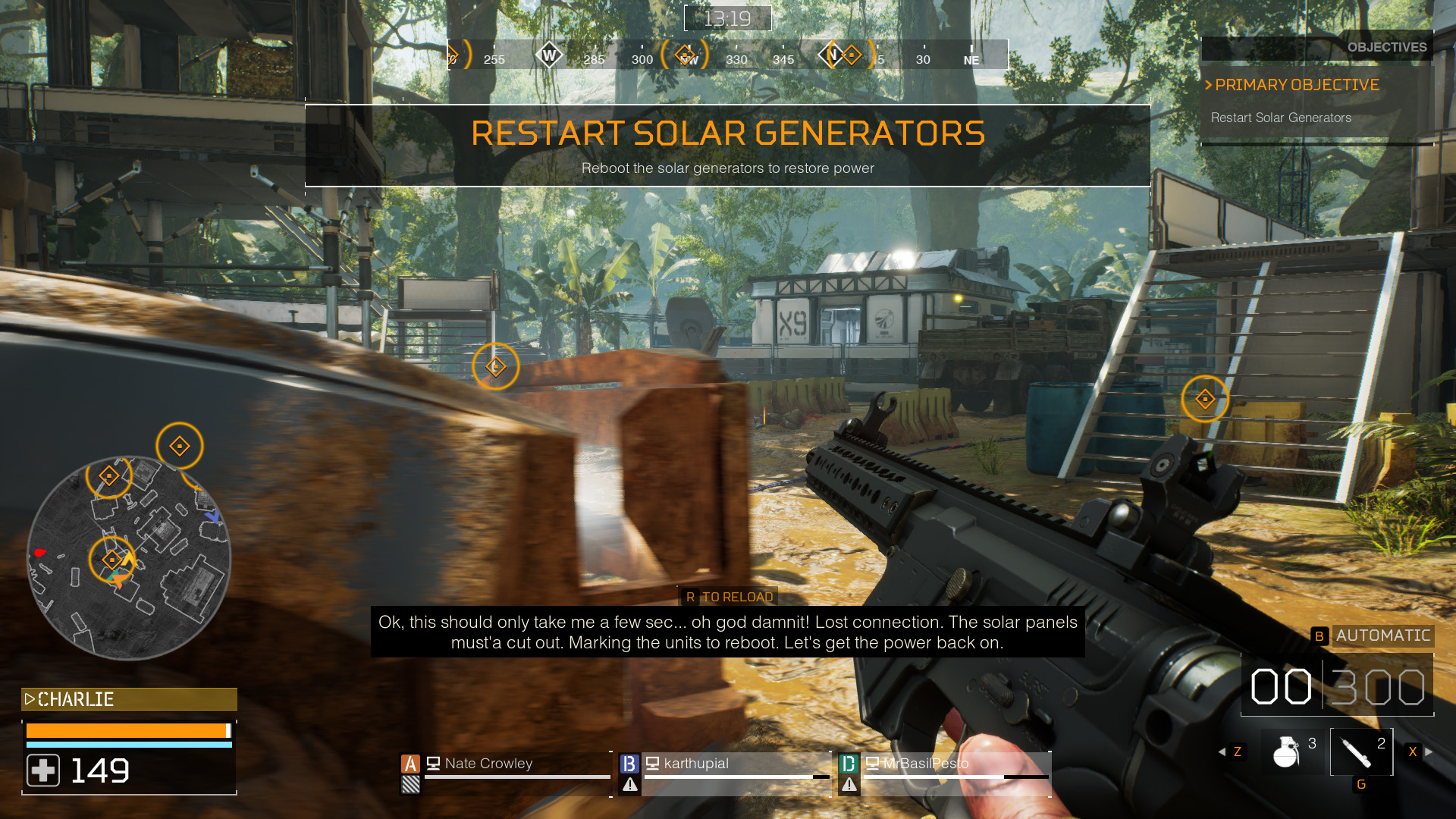 Humans win by either clearing their objectives or defeating the Predator, at which point the goal becomes defending the alien’s corpse until it can be extracted in as pristine a condition as possible, all while enemy soldiers inexplicably become singularly focused on mutilating the dead body by firing their guns into it. It’s pretty clunky stuff, Hunting Grounds could well have been the multiplayer mode of a mid-2000s shooter, but when played with a few friends it’s plenty of fun. Spotting the distinctive shimmer of the cloaked Predator in the trees above – or hearing his involuntary gurgling coming from behind a large fern – before frantically wheeling about the place unloading an entire magazine into the canopy feels authentic to the movies.

Way more fun though is being the big boy himself. The third-person perspective not only allows you to gaze upon the Predator’s pallid lower back muscles, wedged into that fishnet armour like so much gone-off ham, but grants you more spatial awareness than the soldiers you’re hunting. You can freely scuttle up into the treetops like an eight foot tall squirrel, a technique the developer has somehow managed to call Predkour without anyone stopping them. The canopy is a highway of interconnected, glowing branches along which you can scoot, Assassin’s Creed style, zapping in and out of your optical cloaking to disguise your movements. There are just enough available directions of travel to make all this Predkour feel fluid and free rather than sticky and restricted – it’s by far the most graceful I’ve seen him in a game, a well-observed nod to the Predator’s under appreciated acrobatic skills. 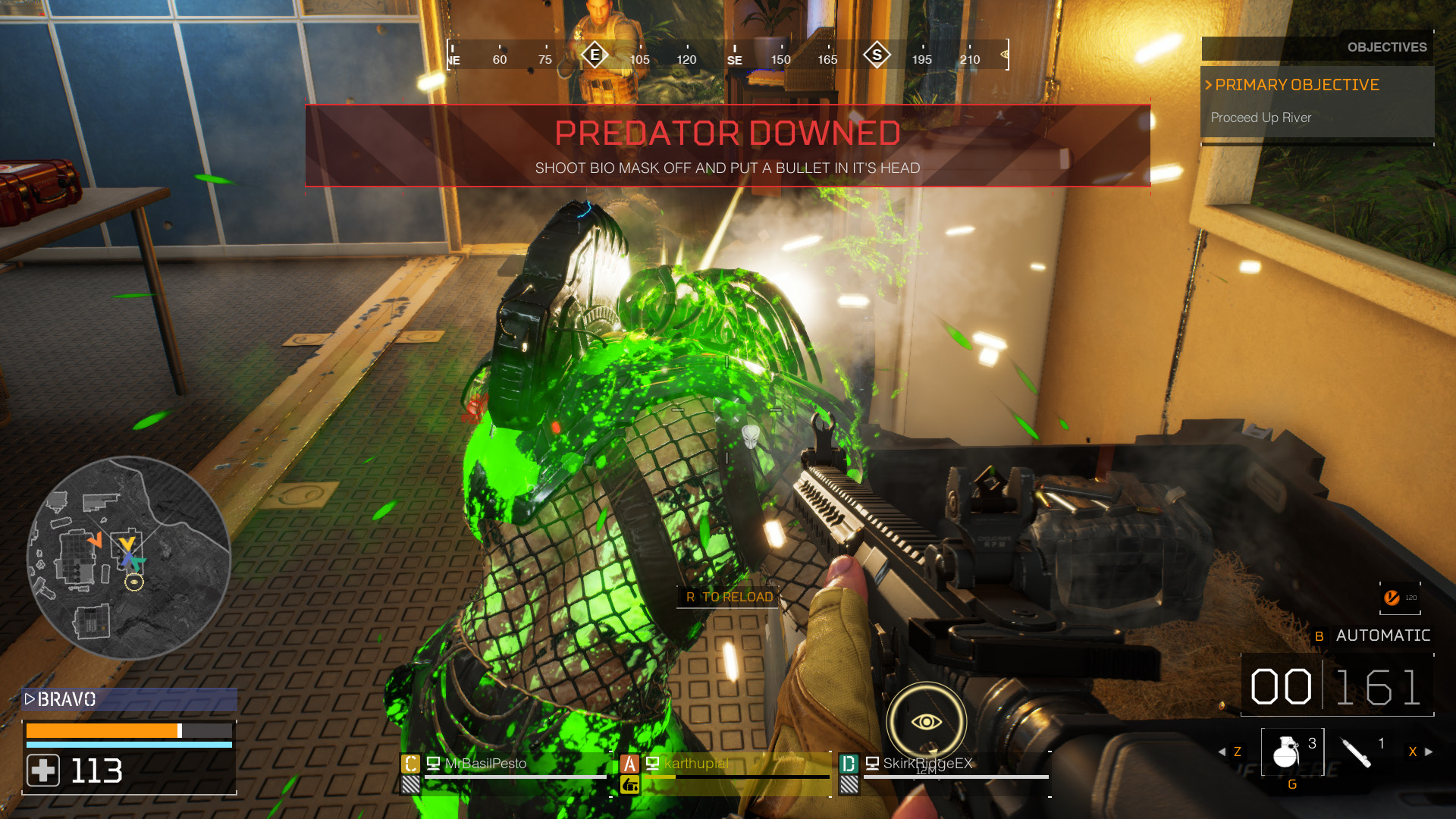 Actually finding your prey presents something of a challenge, as the Predator is cursed with an abysmal sense of direction and spends a lot of valuable slaughtering time just wandering about looking for hot clues in his thermal vision, usually warm bubbles of audio from distant gunfire. The best tactic is to traipse around in the trees until such time as the humans spot you and start to shout about it, before finding a nice hiding spot and waiting for everything to calm down again, but it’s once you’re in combat that the power fantasy brushes up against old fashioned balancing. You’re uncharacteristically weak in the open, a tinfoil predator made of fluff and string, easily gunned down if you bungle the timing of a melee attack.

Some nice ideas have been appropriated from the film. Humans can slather themselves in mud to become invisible to thermal vision. A wounded Predator will leave behind a trail of glowing green blood. Sometimes you’ll spot a surprise pig. And – spoiler if you haven’t seen the movie – the Predator can rudely self-destruct once he’s been sufficiently battered, giving players just a few seconds to sprint out of the blast radius or bravely attempt to defuse him through a simple pattern matching game. This ends the match, though I’m still not totally sure who it constitutes a victory for. The pigs, maybe? 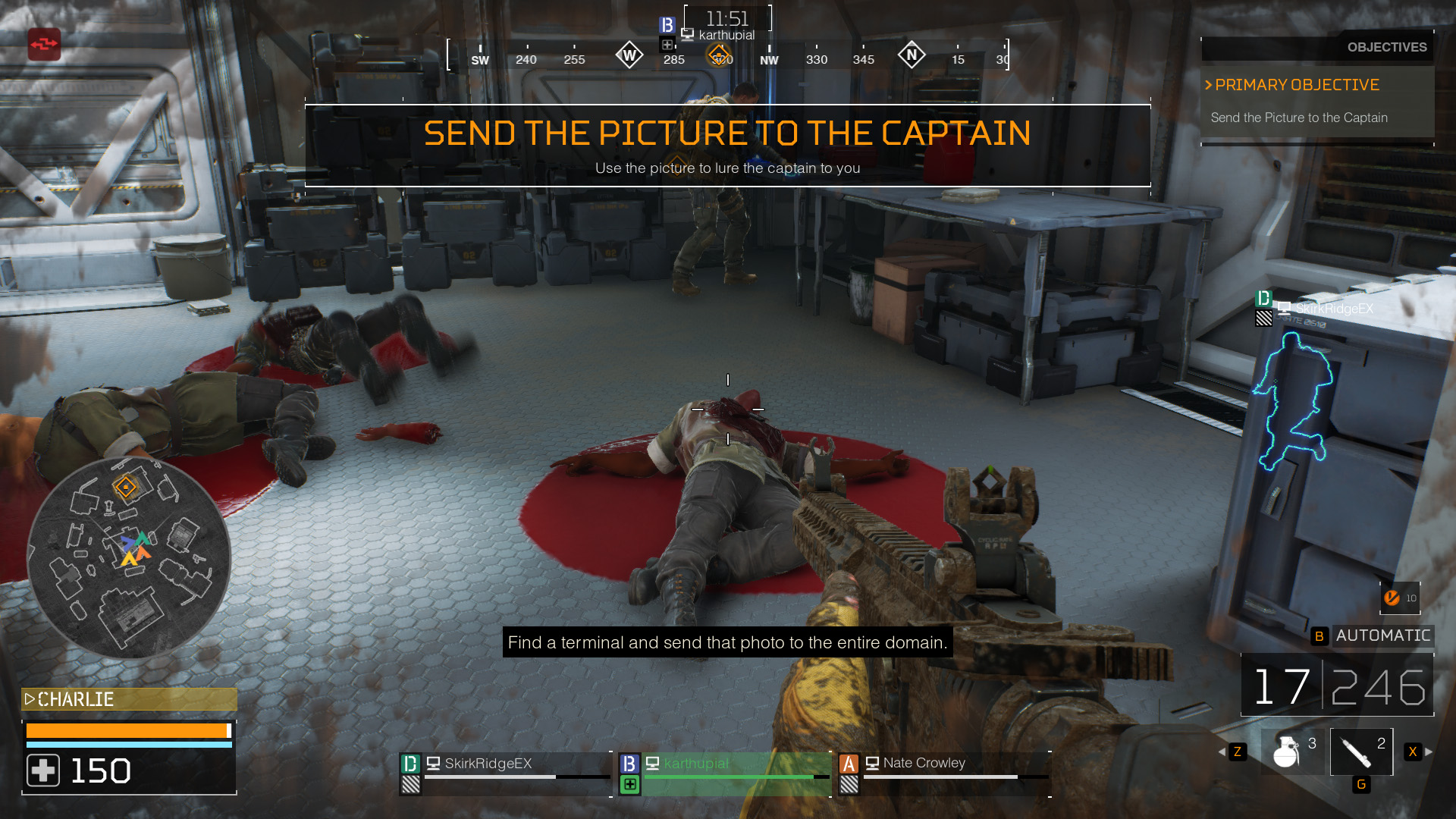 With just three maps to choose from, all of them set in the same jungle and pretty much indistinguishable from one another, it will only take a dozen matches before you’ve seen every which way that things can shake out. It’s at this point that Predator: Hunting Grounds really does feel like the interesting-but-limited multiplayer component of a much larger game, and no amount of loot crates with customisable cosmetic skins, unlockable sniper rifles and fancy new dresses for the Predator can hope to liven things back up again.

It’s a shame too, because I could spend ages running around the jungle as everyone’s favourite Schwarzeneggar-botherer, leaping over temples and howling at the sky in unbridled agony each time this supposedly rock-hard alien has to give himself his little injection of health medicine. There’s a really excellent Predator in here, waiting to be set free.