Premature Evaluation is the weekly column in which we explore the wilds of early access. This week, Fraser’s looking into what lurks below in It Lurks Below. What is It? What does It want? Is It responsible for all my missing underwear?

I’m pretty fond of Terraria, and even more so of Starbound, so It Lurks Below piqued my interest with only a couple of screenshots. It’s unashamedly a miniature Terraria, where heroes dig deep into the ground in search of treasure, fight monsters and nurture a fantasy village. It’s also David “Diablo Dad” Brevik’s first solo project, who’s used his action RPG expertise to occasionally nudge it in a different direction. It could do with a few more nudges. 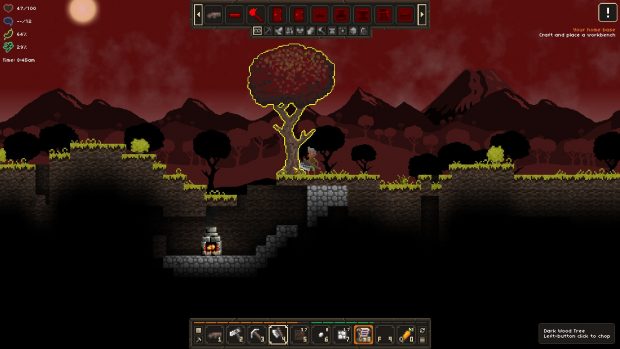 Just in case you’re one of the only people with access to a device that plays game who hasn’t received Terraria in a bundle, here’s the deal: You dig, mine, farm and chop down trees so you can make weapons, armour, gizmos and buildings, mostly so you can get tough enough to stomp around the world, killing increasingly nasty monsters. The common refrain from naysayers is that it’s a 2D Minecraft, but with its structure, piles of loot, bosses and even -- through the weapons -- a loose class system, it owes just as much to RPGs.

You could say all of that about It Lurks Below. And the twist, Brevik’s action RPG sauce, is something Terraria already does more than just dabble in. The RPG elements aren’t as pronounced, but they’re undeniably there, and neither is it short on action. Broadly, It Lurks Below just brings it more to the forefront through defined classes and character progression. 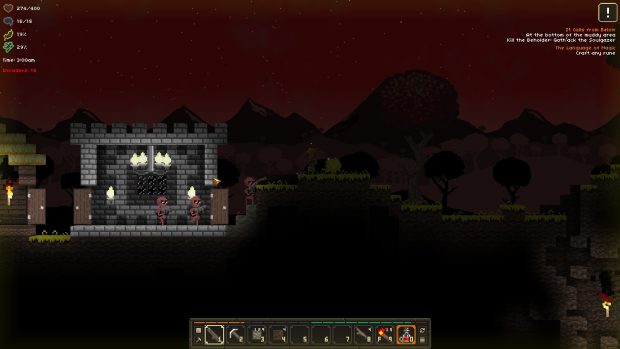 So while you’re planting carrots and slaughtering your way through caves and tunnels, you’re also progressing through a survival tree that exclusively deals with non-combat skills, and choosing stats -- health, mana and weapon recharge speed -- to increase. But, like both Terraria and Diablo, it’s the gear and items you loot or craft that really make you bigger and badder.

It Lurks Below’s heroes all use randomly-generated wands -- effectively guns -- that provide all manner of bonuses to everything from the main stats to loot drops. There are different damage types, like fire or poison, but also different forms, like huge death rays or bouncing projectiles. They’re all brilliant. I’m genuinely excited whenever I get my hands on a new wand, and rarely because it simply increases how much damage I can do. Like the best action RPG weapons, they’re a bit playful and feel just as much like toys as death-dealing instruments. 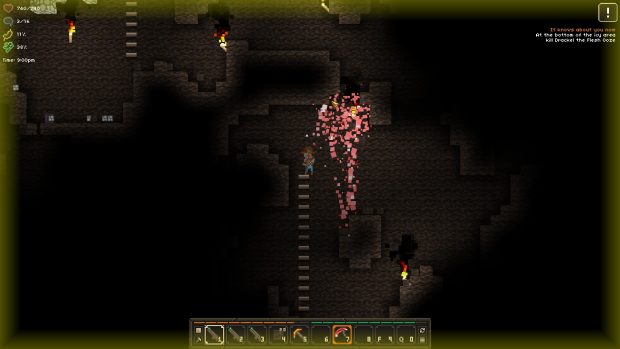 Mindless enemies and the ability to build barricades, knock through walls and dig through the floor means that combat usually only gets challenging because of overwhelming numbers, though a couple of the bosses do require a bit of light pattern memorisation. It’s a large rogues gallery, though, with the majority of enemies throwing new spanners in the works thanks to their diverse and deadly abilities. They might be as thick as mince, but they’ve got all the right tools for murder. A particular nuisance are a group of Jawa cosplayers with a penchant for suddenly appearing behind me, knives at the ready. Stabby little bastards.

It’s the texture of the combat rather than the AI that elevates It Lurks Below’s brawls. It’s extremely kinetic, with wand blasts making the screen shake and pixels exploding like it’s Fireworks Night. And it’s a thrill to jump through a hole in the floor and unleash the energy of the sun, making countless monsters expire in a satisfying shower of damage numbers and loot. Every battle is a kaleidoscope of multicoloured projectiles, bouncing off and demolishing walls and filling the screen with mayhem. 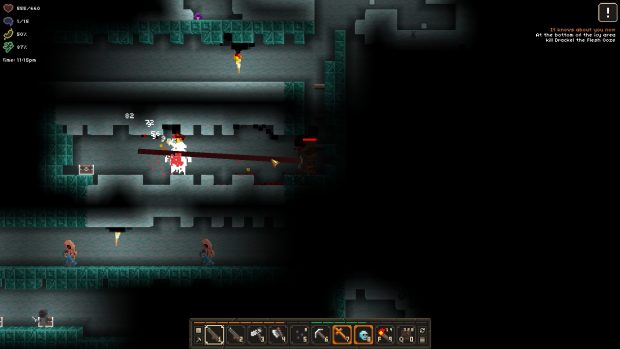 It Lurks Below eschews the traditional RPG ability tree for an artefact system that proves to be a lot better suited. Instead of picking abilities when you level up, you have to go out and search for ancient items that give you a leg up. They’re designed for specific classes but can be used by anyone -- you just won’t be able to rank them up, unlocking their more powerful versions.

As a Necromancer, for instance, I got to wander around with my best pal, a skull that shoots things. He’s more a skull of action than words. By spending cold, hard cash, I was able to increase my circle of friends, adding three more skulls to my posse. On top of these magical relics, there are gems that can be slotted into armour, rings that confer even more magical abilities, and for those times when fashion must take precedence over power, a fine selection of cosmetic-only hats. Indeed, you can build a hat shop. It’s important. 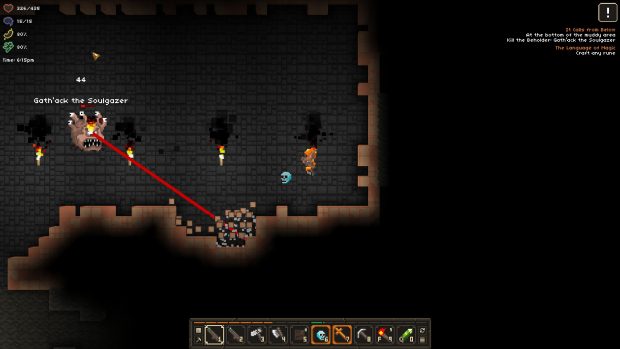 When it comes to slaying monsters, It Lurks Below goes right to the top of the class, but almost everywhere else it’s conservative. Starbound showed that there’s plenty of space for more games like Terraria, but Chucklefish really leaned into the sci-fi conceit, throwing in planet-hopping adventures, space battles and a bounty of cosmic doohickeys, ultimately taking it in a very different direction. It Lurks Below, however, only makes brief detours.

What’s a little strange about how much it sticks to Terraria’s formula is how it does so without much enthusiasm. It’s almost like it wants to be a dungeon-delving RPG, but it’s got boxes to tick. The creative and town building side of things is cursory at best. At least 75 percent of my time in its progenitors has been spent building stuff. Castles, space terminals, tiny villages and massive flying citadels -- some sort of huge project is always the end goal. I’ve still not left the cave I made right at the start of It Lurks Below. You can erect the husks of buildings, sure, but there’s barely anything to put in them, and only the prefabricated shops, of which there are five, serve a purpose. The village is a tool, rather than something you might take joy in creating. 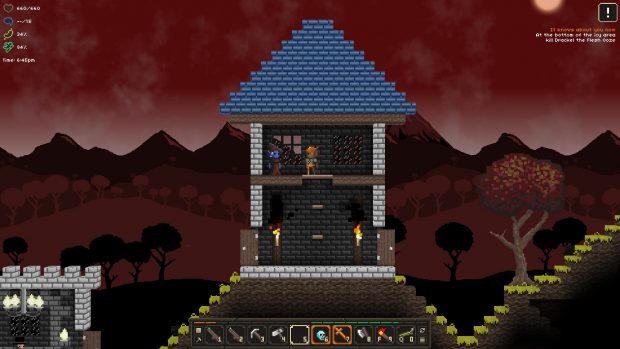 Ostensibly that puts the focus on dungeon crawls, but it would be disingenuous to imply that every Terraria-like doesn't also give that prominence, and while the fights might be brilliant, the dungeons themselves don't amount to much more than an assortment of caves and the occasional arena-sized cavern, completely lacking in character. There's the ice layer and the slime layer and so on, and that's about the extent of the dungeon variety.

I’m ambivalent. It’s simultaneously too much like Terraria and not enough. There’s danger in comparing an early access title that’s only been in development for a year with something that’s had seven years to grow, of course, but the world is two thirds complete, and Brevik has said that what it lacks is mostly “end game content”. I hope that’s where its identity is lurking, because right now it’s lacking that, too. 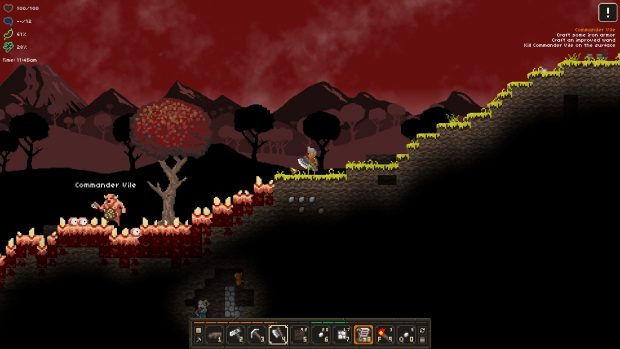 I’ve still happily lost hours mining away, blasting gun-toting demons with bouncing icicles and hanging with my skulls. It’s constantly doling out new weapons and monsters to test them on, and every dive into the subterranean world results in so much more loot than I can carry that I’ve just got to go back down one more time. Brevik, as you might expect, is still pretty good at making the grind compelling.