Premature Evaluation is the weekly column in which we explore the wilds of early access. This week, Fraser’s trying to lead a healthier, happier life in Scum, the multiplayer survival sim.

Scum’s wall of data is mesmerising. From the moment I arrived on the island, every spare second, and even seconds I couldn’t spare, was dedicated to staring at it. The readings and statistics told me everything I needed to know about my body, from how many teeth I had left to when I should squeeze out a big poo. It’s immensely convenient, but like so many human advancements, from ploughing fields to social media, it can take over your life. I sold my soul to a fitbit.

The metabolism screen is a window into Scum’s obsessively detailed simulation. The basic HUD might tell you that your health is low or that you’re running out of energy, but it’s only by poring over your chart that you’ll be able to understand why you’re sluggish and sickly. Diet, fitness, an injured ankle - they’re all simulated and tracked, affecting your odds of survival. 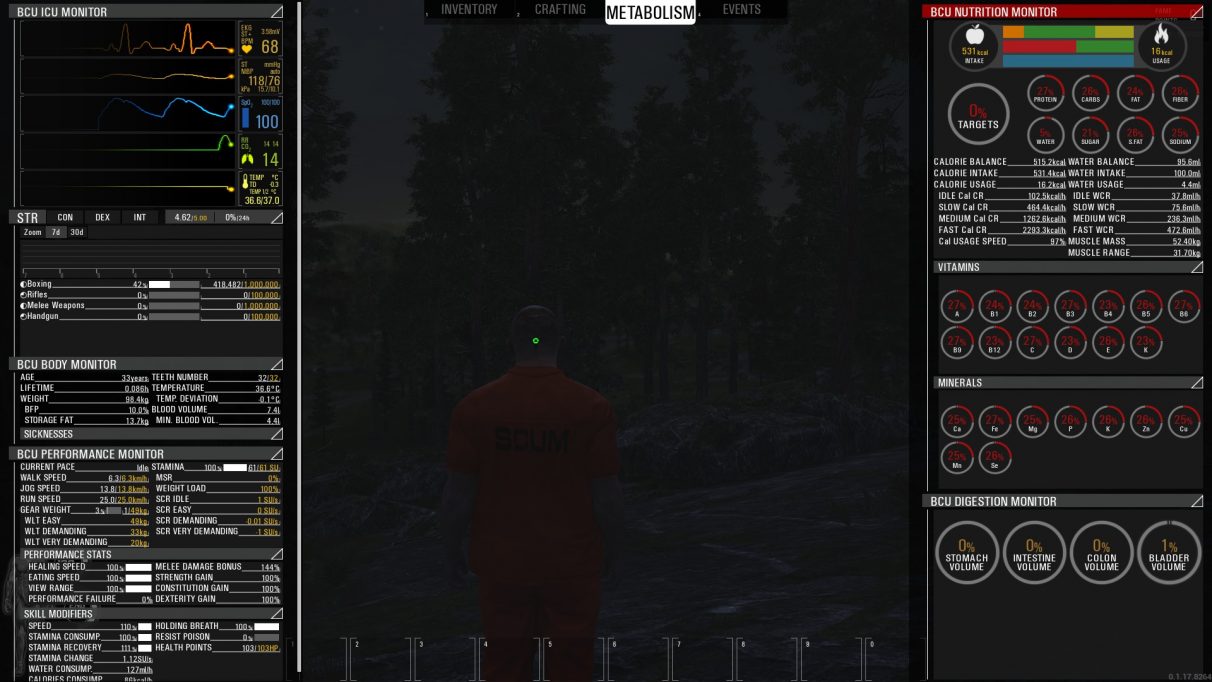 Scum’s broad strokes are still familiar. Like DayZ, it’s a survival sandbox where you can hunt wildlife, ignore impotent zombies and compete or cooperate with other survivors. Instead of worrying about the minutiae, you can react only to the HUD, eating when you’re starving, drinking when you’re dehydrated, just trying to fulfill your basic needs as you search for better equipment.

Like any other survival game, your stomach will inevitably start grumbling. When you find some food, that solves the immediate problem, and you can get on with robbing other players or dancing around zombies. Very quickly, however, you’ll get hungry again. That’s because you’re constantly burning calories. It’s not enough to just eat a slab of meat when you’re peckish, you’ve got to find a balance between how many calories you’re consuming and how many you’re burning. 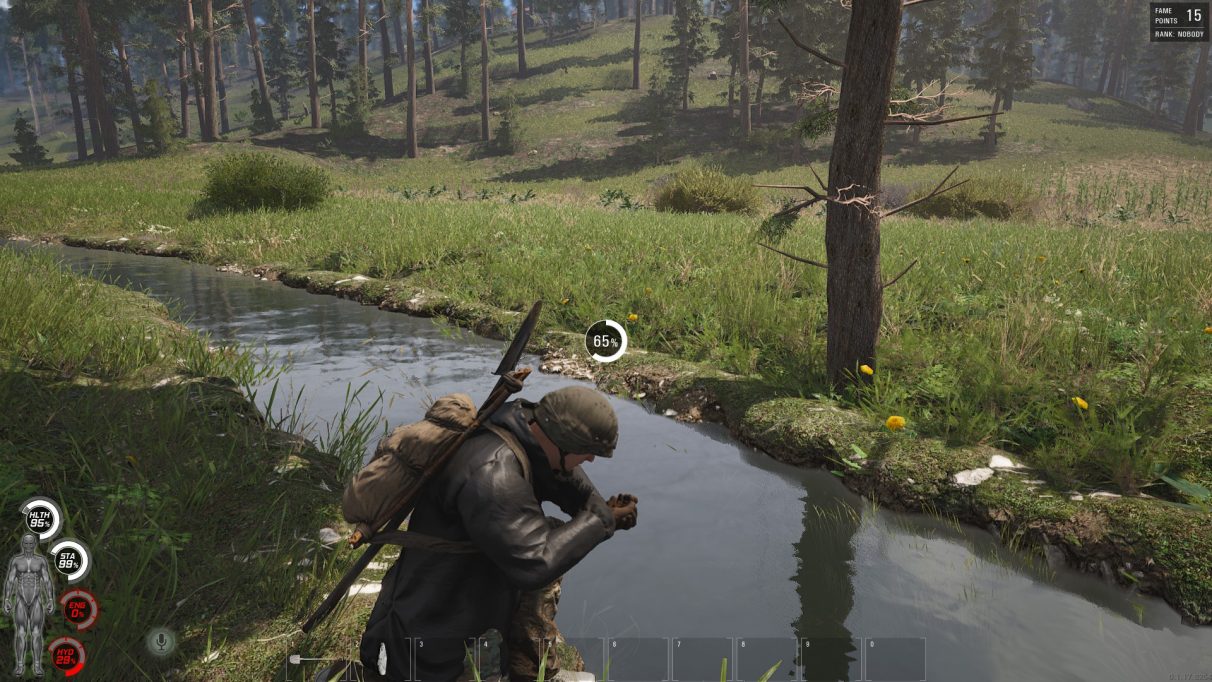 Worrying about calories is just the beginning. There’s protein, fat, carbs - you can just keep going down the rabbit hole. Not all food is the same, either, and if you really want to have a healthy diet, you’ll want to start cooking. This is easily the most effort I’ve put into my diet. And it was while I was stumbling across a field, trying to figure out what I’d need to get some big, sexy muscles, that I had my first brush with death.

A silhouette appeared in front of me, partly obscured by the metabolism screen. Like a startled antelope (but more like a schlubby bald guy wearing an orange jumpsuit) I sprinted towards the treeline. I’d already encountered a few zombies, but this was obviously another player, and judging by their clothes it was one who’d had time to scrounge up some gear. I considered saying hello, but remembering that I was stuck on an island where convicts fight for the amusement of the audience watching at home, I thought better of it. I kept my eyes peeled and continued to back away, which is how I stumbled right onto something considerably more troubling than one of my fellow convicts. 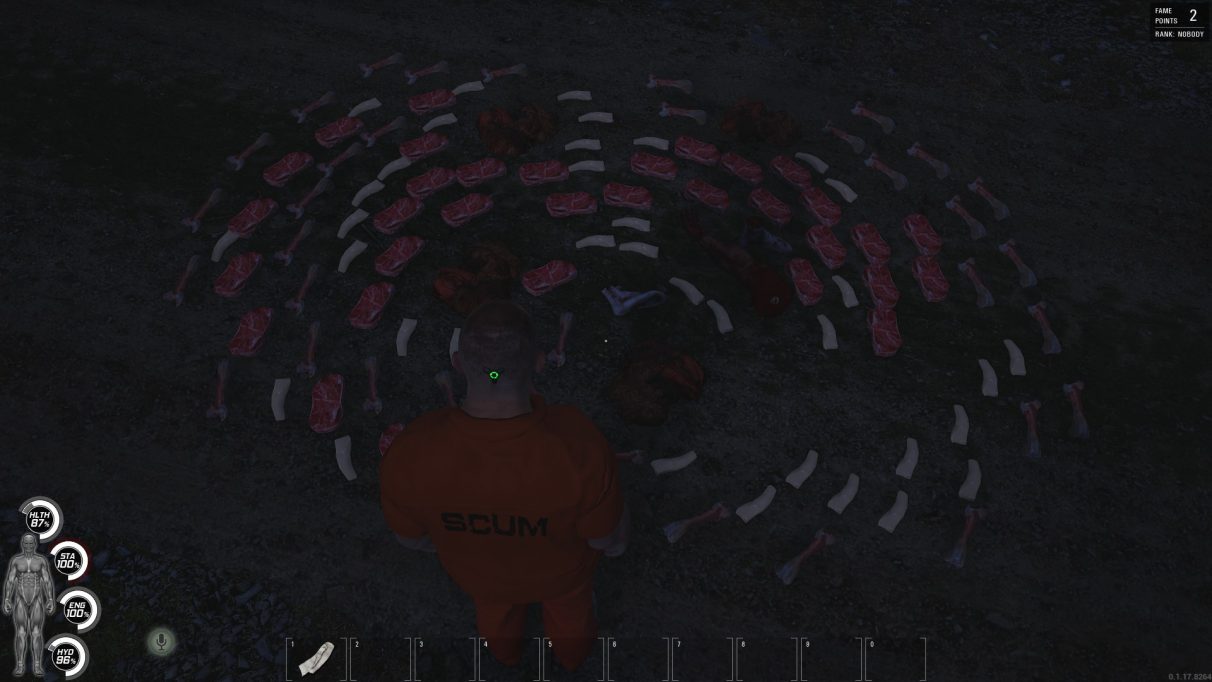 Whatever it was - grisly crime scene, art, failed meat golem - I wasn’t particularly eager to stick around and ask questions. The other player had vanished, too, so I bolted up a path and deeper into the forest, where I soon came across another arrangement of limbs and meat, though this time haphazardly strewn across the ground. It was just the product of regular cannibalism. What a relief!

As far as I can tell, chomping on other people is the simplest way of filling your belly. You can forage for fruit and hunt animals, but it’s much easier to just kill a zombie and carve them up for dinner, netting you more food than you could fit in your backpack. They’re not actually zombies, they’re just dead bodies that are being controlled by the show's producers, so it’s not gross at all. A diet of long pig shouldn’t be healthy, though I’m yet to see any negative side-effects. Well, apart from when I overindulged. 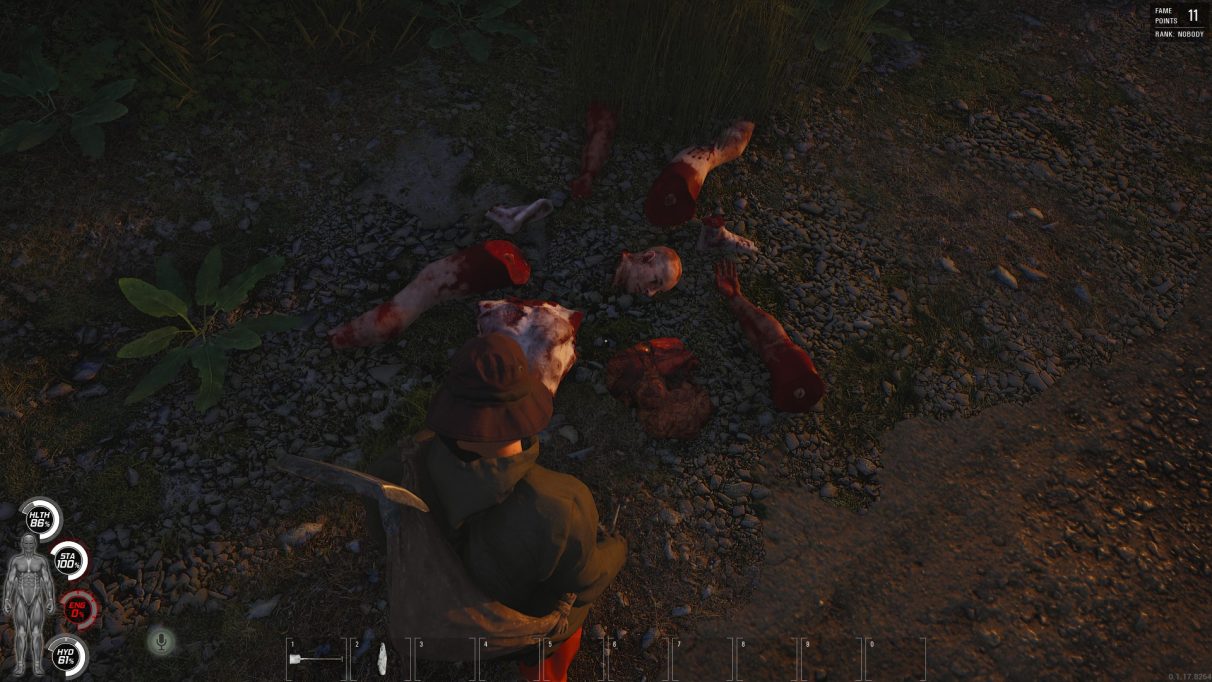 I had too much meat to carry. Scum’s actually quite generous when it comes to inventory space. Most items of clothing come with pockets, and since you can wear several layers, you can carry quite a lot of junk even if you don’t have a bag. More layers raise your body temperature, slow you down and make you less stealthy, but it’s a small price to pay for carrying a few more bits of scrap metal that you’ll definitely use soon. Probably. The island is also inexplicably full of bum bags. Even with all of my layers and my fetching bag, I still didn’t have enough room for all of my people steaks.

Not wanting to waste good food, I decided to turn my problem into a delicious picnic. I scoffed steak after steak, expecting a big boost in calories. I was fit to burst, but I pushed another one down my gullet anyway. It was one steak too many, and immediately came back up, along with the rest of the contents of my stomach.

It’s a wonder that I had any time to loot the abandoned buildings that dotted the island, given the amount of time I was spending on trying to achieve a well-balanced diet. And when I was rummaging around in crumbling homes and derelict warehouses, I was looking for salt and vitamins and cooking pots. The simulation isn’t just for show, then. It completely changed my priorities. Food wasn’t just an ancillary resource that I was using to keep me alive for long enough to get a better gun, it had become the reason I was taking risks by venturing into towns. 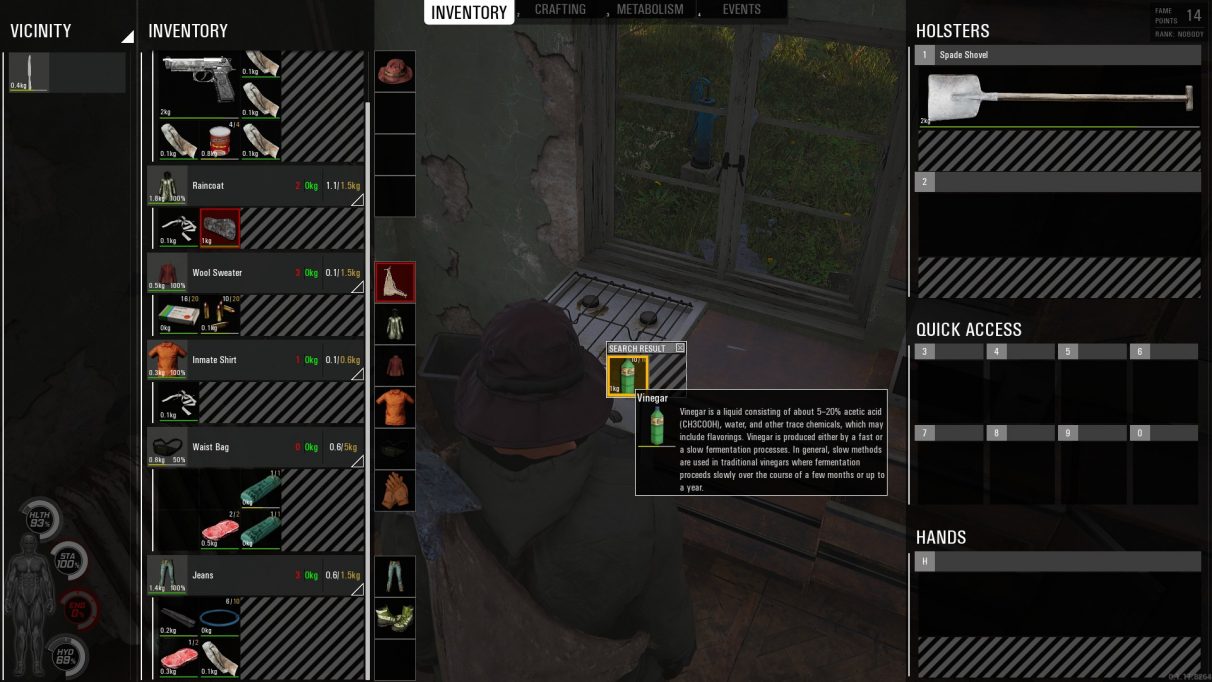 While food was high up on the list, surviving on the island necessitated a few other things. I needed clothes that were appropriate for the fickle weather, tools to chop wood and cut meat, and countless little things that would take the pressure off me. And all of those things required resources and components. Before long I was doing a fair amount of crafting, which is frequently where survival games lose me, but not this time.

Scum has a rare crafting system, a wonder of the modern age perhaps, that doesn’t force players to jump through hoops or spend hours engaged in busywork. And it does this all while maintaining an air of realism. If you want to make a bag, for instance, you’ll need a few ingredients, including some rope. There are quite a few different types of rope, all of varying quality and complexity. Any of them can be used. They’re all rope, after all. Similarly, you can use leather, a bunch of rags or even more strips of cloth for the bag itself. Almost every craftable item lets you make these kinds of substitutions, sacrificing quality when you just don’t have time to hunt down the finest rope in all the land. 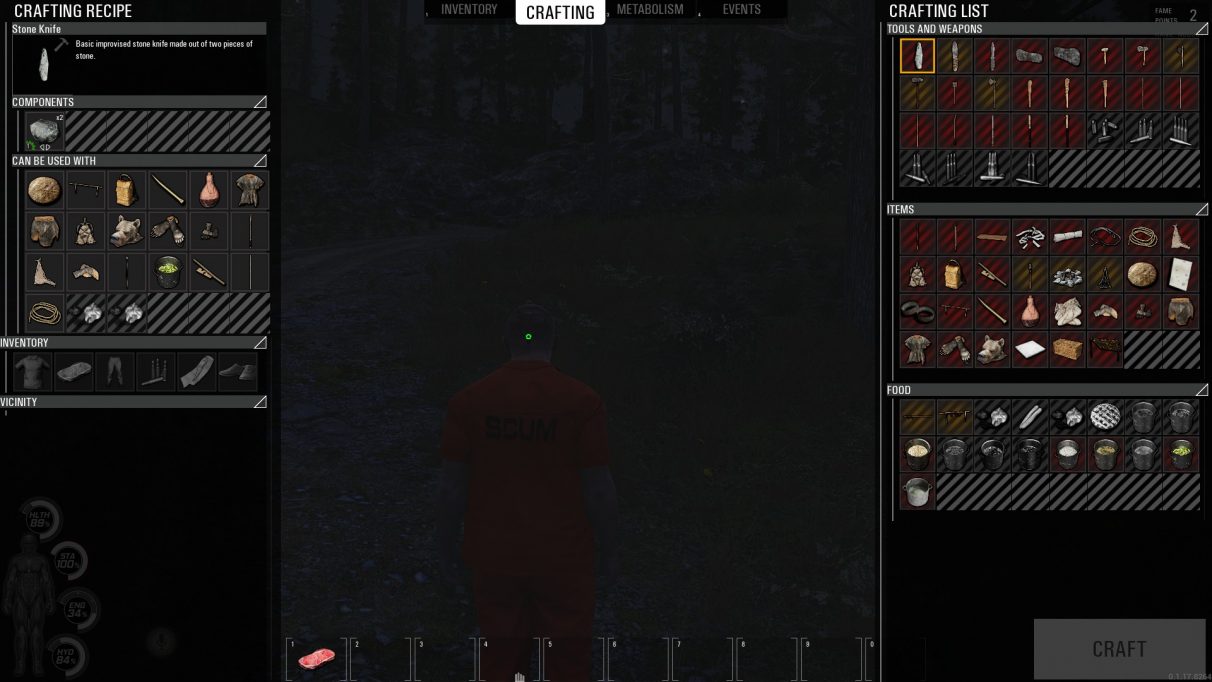 The crafting menu doesn’t make it remotely clear that these substitutions are possible, and the UI in general could be a lot more legible, but it’s otherwise easy to use. If the ingredients needed to craft something are nearby (not even necessarily in your inventory, just in your vicinity), you can just hit craft. And that’s it. No dragging or combining or pop-ups. All the time you save because you’re not faffing around in your inventory or chasing down rare minerals can be spent crafting more stuff, or if you’re like me, gawking at the metabolism screen for another 10 minutes.

When I wandered into Prigorje, the largest town I’d come across, I was feeling fit, well-fed, and I’d thrown some post-apocalyptic chic over my jumpsuit. Things were looking up. I’d just done a long sprint, so my energy levels were down, but I had plenty of food and drugs at the ready. First, however, I had a town to pillage. 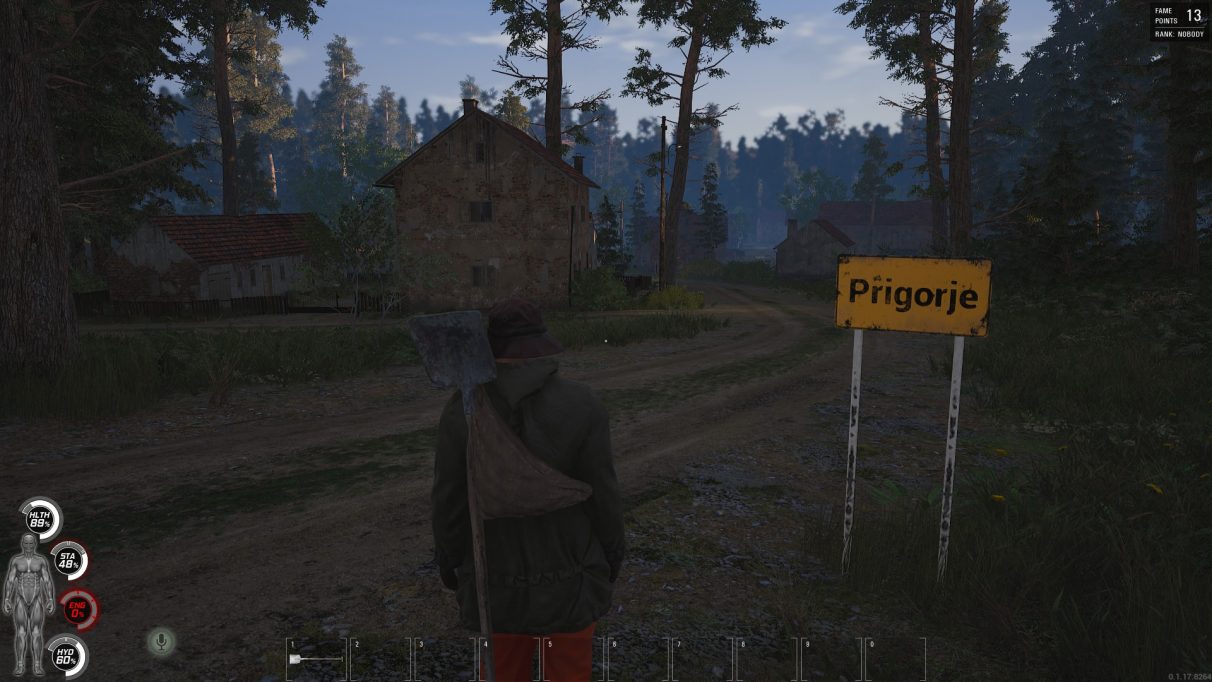 Prigorje was overflowing with just about everything. I filled my inventory after two houses, but I already had enough resources to make a much larger bag. I considered making it a temporary home. I’d been bouncing from building to building for maybe 20 minutes when someone startled me. I was crafting outside and a balaclava-wearing fella popped into existence right in front of me. He mumbled something, but he was too quiet for me to understand. I backed away. More mumbling. And then the knife came out.

Unprovoked, the mystery man started flailing. I had my own knife, as well as a loaded handgun, an axe and a spade. It didn’t matter. He blinked in and out of reality, appearing all over the place, which is how I presume how I looked to him. I wanted to end things peacefully, but he refused to back down. Trying to hit him was even less fun than just letting him stab me to death, and running away didn’t do much good either. Eventually, after a pointless, messy fight that wasn’t enjoyable for either of us, I died. 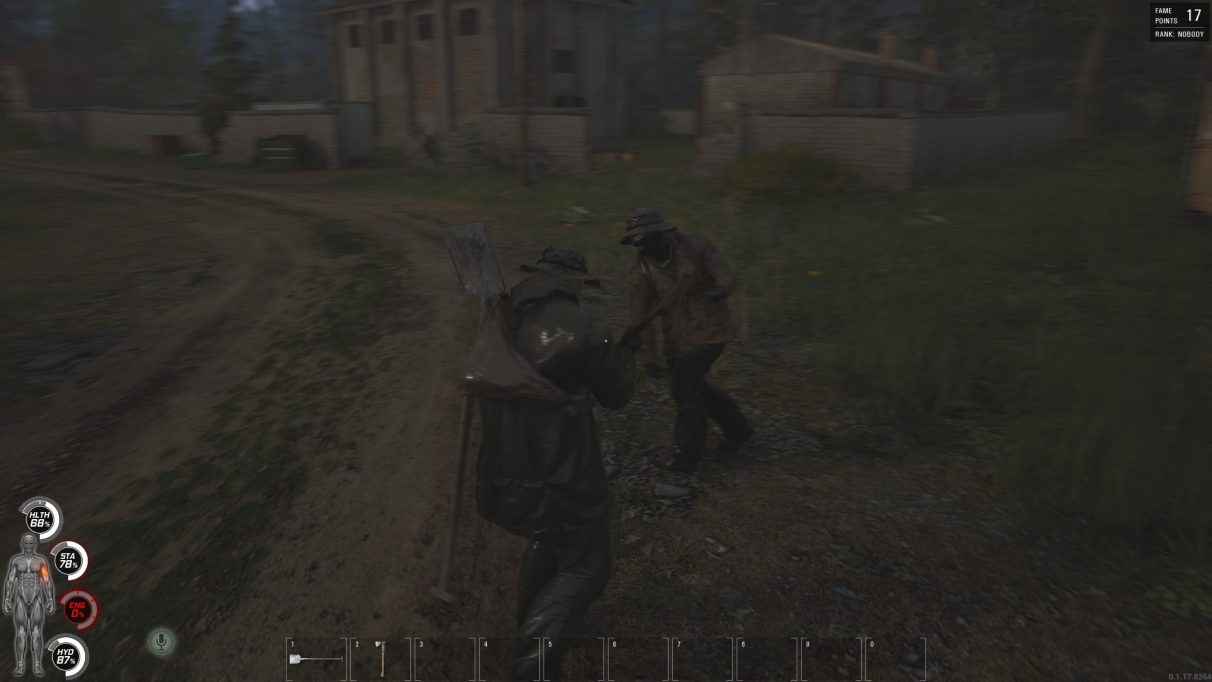 Respawning, either at a bunker or a random location, costs fame points, a resource that is ostensibly generated by keeping the audience entertained, though it’s not clear how, specifically. I seemed to generate some just by wandering around, surviving. It doesn’t really seem to matter at the moment. The game show side of things is still quite disconnected from the rest of the game. There are leaderboards, and you could theoretically work your way across the map, hunting down the top dogs for fame, but I’ve yet to find any impetus to do that. There’s also some structured PvP with capture the flag and deathmatch modes, but nobody on my server seemed very interested in them.

I started again, with the same character but with none of my precious equipment or tasty meats. I wouldn’t see another player again after that encounter. The map is vast and even with 63 other people surviving alongside me, it might as well have been empty. I’m not sure if I was really worse off. I found myself unexpectedly content just trying to build my Adonis. 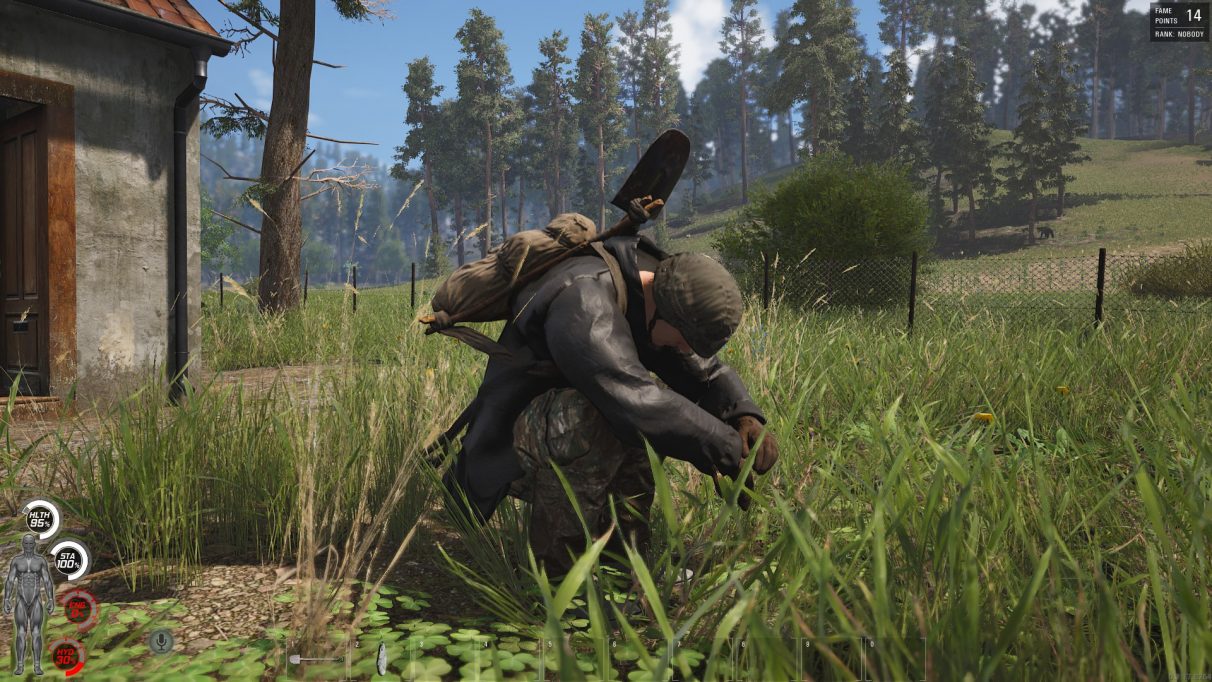 He still needs to be potty-trained.