Devolver Digital's whole brand is edgy nostalgia but it is weird they're casting a misty-eyed gaze back to the distant year of 2012, when "Friendly!" shouts in DayZ were the sound of the summer, with multiplayer online survival murder sandbox Scum. We'll get to relive those halcyon days soon, as Devolver have announced an early access launch date of August 29th. Prepare to once again trudge through woods, drink from streams, and worry about how many centilitres of blood are left in you, all the while trying not to get murdered by others.

Developed by Gas Guzzlers mob Gamepires with the Serious Sam gang at Croteam, Scum is very much not a battle royale game. It borrows some of the game show trappings often seen in the genre, presented as a TV show where prisoners murder each other (ooh that Devolver edge) for the approval of viewers and sponsors, but is very serious about survival. Which I can best demonstrate by showing you its status menu: 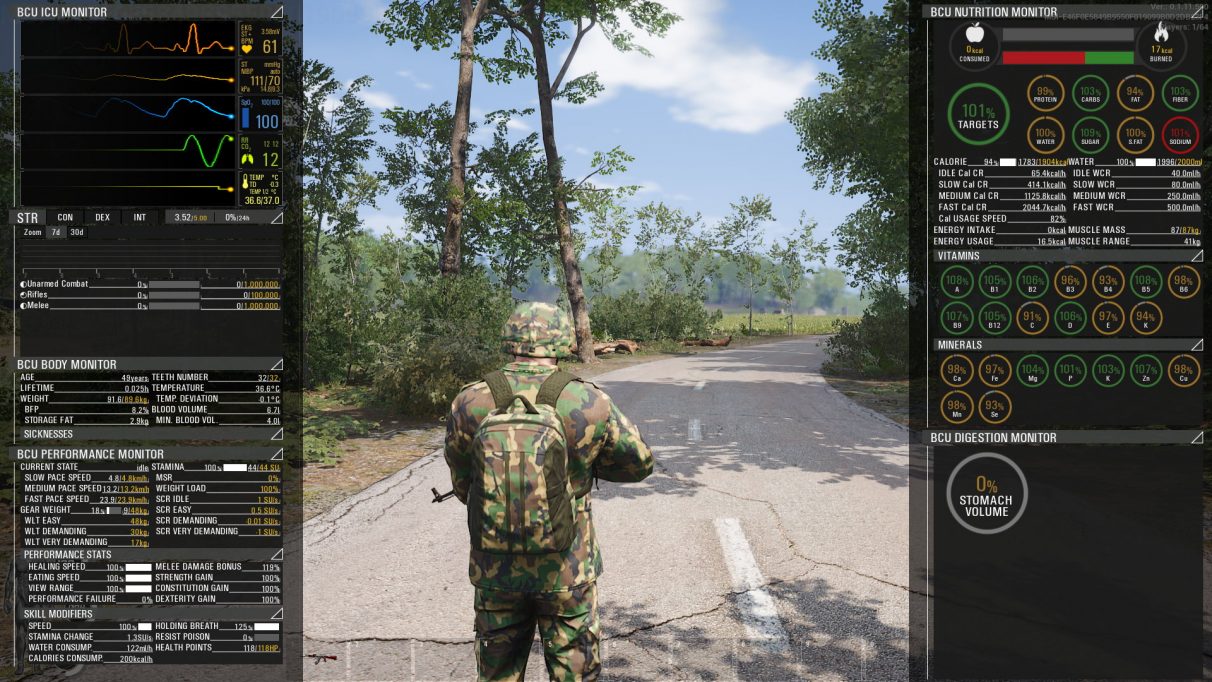 Water consumption; calories burned; sodium levels; blood volume; vitamin and mineral levels; "TEETH NUMBER"... these are not the statistics of a game where you just grab a gun and shoot a man in the face. Here's the official marketing blurb:

"Scum evolves the multiplayer open world survival game with unprecedented levels of character customisation, control and progression, where knowledge and skills are the ultimate weapons for long-term survival. Players will balance base level needs with knowledge-based skills to manage everything from nourishment, metabolic rate and body mass to weapons proficiency, combat style and security systems hacking. Dominate the island with your skills, cunning and strategies to achieve higher levels of game and receive powerful gifts from corporate sponsors and, if you happen to slip up and die, get resurrected by the show’s producers with all your valuable skills still intact."

Scum is headed to Steam Early Access. The plan is for it to be there "for at least one full year" while the devs add and expand features, guided by player feedback. At launch it's due to have the core game intact but be a bit raw and missing features including "story-driven mission objectives."

Given that DayZ is still in early access after five years and so many other games in the genre wither on the vine, I can't imagine buying Scum in the early days. Doubly so because it's already a year behind schedule, having originally been expected to hit early access in 2017. Though I may change my tune if Scum hits that nostalgia gland just right and suddenly all my gamepals are firing up dormant Ventrilo servers to relive the summer of 2012.

God, 2012! We were so young back then, so innocent, so foolish. We'd barely heard of Carly Rae Jepsen! And as we bopped to Call Me Maybe, we had no idea of the heart-slamming jams she'd fire our way in the years to follow. We were so young.