Premature Evaluation is the (usually) weekly column in which we explore the wilds of early access. This week, Fraser's shooting acrobatic cowboys in Sky Noon, an unconventional FPS full of grappling hooks and aerial antics.

My stetson and I have spent a great deal of time soaring through big, open skies recently. It’s been lovely, though there’s always a tinge of frustration and just a bit of disappointment breaking the serenity of my trip through the clouds. That’s because I’m usually hurtling to my death. Sky Noon can be a tricky FPS to wrap one’s head around, and I’m not sure I’m there yet, judging by my many fatalities. Because I’m a glutton for punishment, and because it’s shaping up to be a uniquely brilliant cowboy shootout, I’ve persisted. 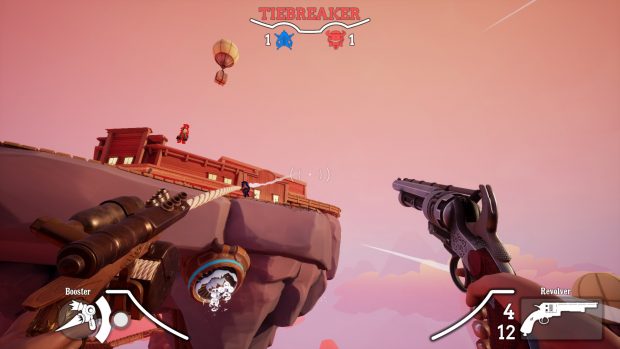 There’s no health in Sky Noon, so no damage, either. Weapons, though they look familiar, fire compressed air rather than their conventional payload. That’s not to say that they’ve been de-fanged. You defeat your enemies by knocking them off the floating Wild West islands you’re all fighting over, making these super-compressed air cannons, revolvers and machine guns all pretty handy.

It can be hard to shake old habits, though. The weapons trick you into thinking it’s a regular FPS, but nothing works the way you’d expect. You’ll need to forget a lot of what you’ve learned. When you throw a stick of dynamite or plonk down a mine, you’re normally just concerned about how many people are going to get caught in the blast. It doesn’t matter how many enemies the explosion hits in Sky Noon, though, because it’s just air. What matters is where the explosion sends them. If they’re just going to get bumped into a wall right next to them, they’ll be disorientated at most. You want to punt them right off the edge of the island.

Every weapon applies a different amount of force. The rocket launcher, for instance, packs a wallop, but it’s slow and often at a disadvantage when you’re trying to hit fast-moving foes speeding across the sky. The machine gun, on the other hand, doesn’t knock enemies far, but as long as you keep hitting them, they’ll be slowly pushed back and have a hard time escaping. It’s most effective when an enemy’s already in the air because it can stop them from using their grappling hook to get to safety. 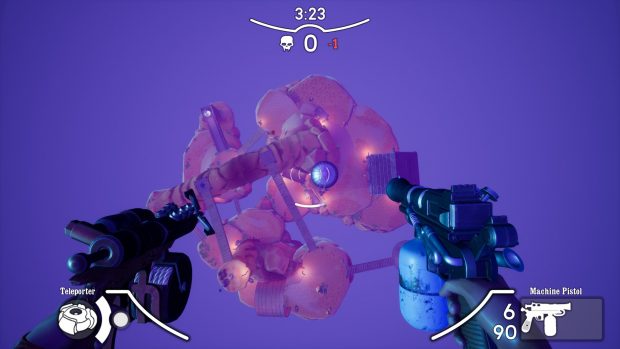 The grappling hook is Sky Noon’s literal lifeline and, like every game with a grappling hook, it’s the star attraction. It’s a powerful bit of kit with a lot of range that you can fire instantly, and like Spider-Man’s web shooter or Batman’s grappling gun, it isn’t just used to get around or avoid fatal falls - though it is very good at that. It’s also pretty useful in a fight.

I didn’t mean to grapple onto an enemy. I fired at a ledge, but just as the rope shot out, someone walked right into my crosshairs. Before I knew it, I was being dragged along by this cowboy, the camera going bonkers as we bounced around the islands. When you plan it, this can be great if you’re chasing an enemy, but you can also use it to launch yourself at them, turning your body into a powerful projectile. So when your gun isn’t doing the trick, just use yourself.

The physics isn’t as wild as, say, Worlds Adrift, and while I’m sure I have a lot to learn about using the grappling hook effectively, I rarely find myself frustrated by it. It’s precise enough so that it usually takes me where I want it to, though I won't pretend that I'm ever particularly graceful. 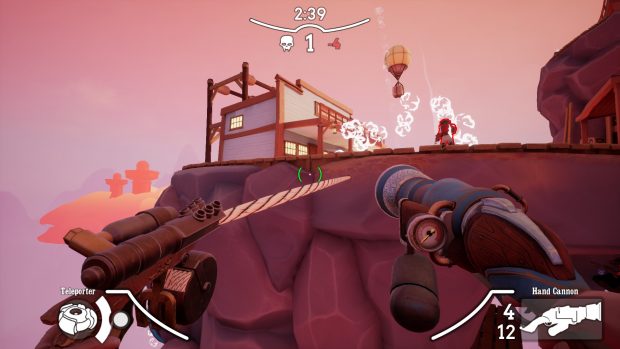 When you want to bring something to you, that’s where the lasso comes in. You can snatch weapon and power-up crates, and also other players. You can get them off objectives, yank them off islands or just pull them into range of your shotgun so you can knock them into the horizon. It’s a bit trickier to use than the grappling hook though, and I confess that half the time I’m just grabbing thin air, embarrassing myself in front of all the other cowboys.

Instead of having fixed weapons or custom loadouts, you spawn with a random gun and item, and you can get new ones by picking up the aforementioned crates. They all seem to be random, too. This forces you to live in the moment, but it can also be a terrible pain in the arse when you die just because you didn’t luck out when you grabbed your last crate, or if a crate swaps a particularly handy item, like life-saving jetboots, for a stick of dynamite. 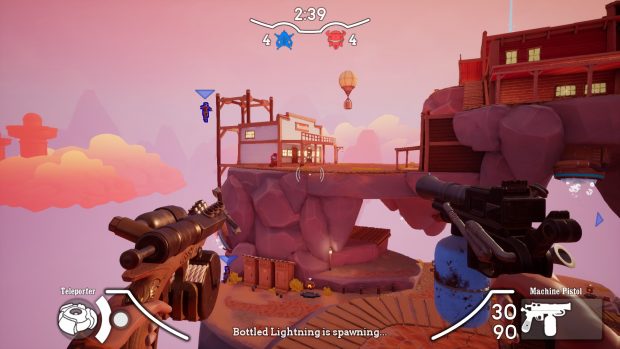 When you find yourself with a boost, teleporter or jetboots, committing to actually using them is tough. You know that, at some point, you’re going to be flung into the air and need a way back to the island, so it can be tempting to save your handy items for that inevitable crisis. You don’t lose them when you use them, but the cooldown is almost worse when you’re falling to your death. It’s a special kind of torment, knowing you have something that can save your life but being unable to use it.

Along with team and free-for-all deathmatches, there’s a king of the hill mode that’s perfect for a game so obsessed with knocking people around, as well as a cart mode that evokes Team Fortress 2 and Overwatch. Both teams need to escort a minecart -- a payload, essentially -- but you have to physically move it yourself, shooting it and moving the track to get it to its destination. It’s extremely messy. The UI provides little in the way of information or instruction, and every match I’ve been in has devolved into a conventional deathmatch where people occasionally shoot a minecart.

I’m a big fan of the mode conceptually, as someone who has never been keen on the ‘just stand near it to make it move’ technique, but it needs to be clearer what the teams should be doing. The maps are a little hard to parse too - it’s a mess of tracks and floating islands. The openness, here at least, creates a few problems. 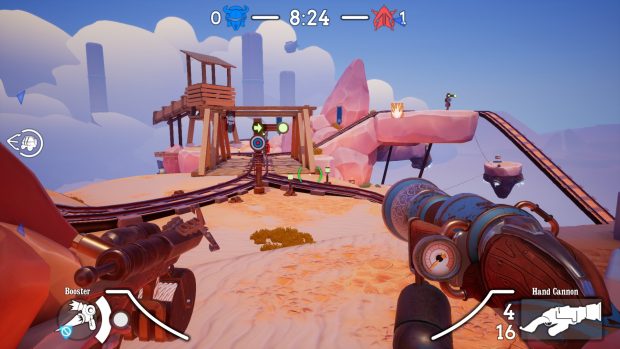 It’s a great relief that the small playerbase seems to be largely pleasant, no doubt a symptom of its size. I was never lambasted by my team for being obviously shit, and the closest it’s been to toxic was a single passive-aggressive comment not really directed at a single team or player. And while the population isn’t high, there’s usually a few active servers, with players tending to stick around for a while. It’s healthier than a lot of other early access multiplayer affairs.

Calling a game ‘experimental’ often conjures up images of something being held together by sellotape as often as it does something innovative, but Sky Noon’s novel mechanics are all executed so well that it’s easy to forget that it’s not using an existing framework. While it does draw inspiration from the likes of Super Smash Bros. and Team Fortress 2, the whole is something new entirely.