To this day, one of the most powerful things I've experienced is printing my own zine. Opening the box shipped to my door and seeing the neatly stacked little booklets with my handwriting inside is the sort of pride I imagine is reserved for published authors or narcissists. "Zine," for those not in the know, is short for "magazine," and it's honestly a lifestyle. Typically a zine is a do-it-yourself booklet made via photocopier, with a small circulation and a counter-culture slant. They're purposefully messy, a little (or very) provocative, and imbued with the feelings and power of the people who make them.

Zines are not solely relegated to the power of print, however. The ink-stained fingers of zine-makers weaseled their way into the digital years ago. From vignette-games to zine-software to (of course) the rise of those meddling videogame zinesters, this week's Priceless Play is an ode to the makeshift.

Today's column was inspired by Lawhead's Electric Zine Maker, "a printshop and 'art toy' for making zines." More "playful tool," than self-described game, Lawhead's Zine Maker is a wonderful little catalyst for your zine-making dreams. The interface allows you to insert your own images, write text with any font you have installed (dreamy sigh), smudge, paint, and more. And what do you mean there's no subscription fee? Wow.

Electric Zine Maker is still in early development, but it's already got a lot going for it. And if Lawhead's other work is any indication, the upcoming features are really going to make it shine. Lawhead is planning on adding "many strange and interesting art-tools for the drawing interface," and other effects, like glitches, to translate your paper zines to the vaporware digital future they deserve. The zine in the header, A Machin E for Pig, is about pigs. I made it with my partner Jack de Quidt. I hope you make something equally weird and wonderful.

Made for the inaugural Flatgame Jam in 2016, And I Made Sure To Hold Your Head Sideways is an autobiographical game about taking care of a friend after they've had too much to drink at a party. It is a sobering story, told through jumbled hand-cut pictures. The disorientation of these movements is simple and remarkable.

The flatgame jam's whole, uh, jam is in using hand-drawn materials made in under an hour as the assets for the game you make, and it's produced some of my favourite games in the jam scene (this one chief among them). I think the spirit of the digital zine lives on in the flatgame, and I encourage you to take a dive into the flatgame archives if you get the chance.

You Are Jeff Bezos: A Billionaire Simulator by Kris Ligman 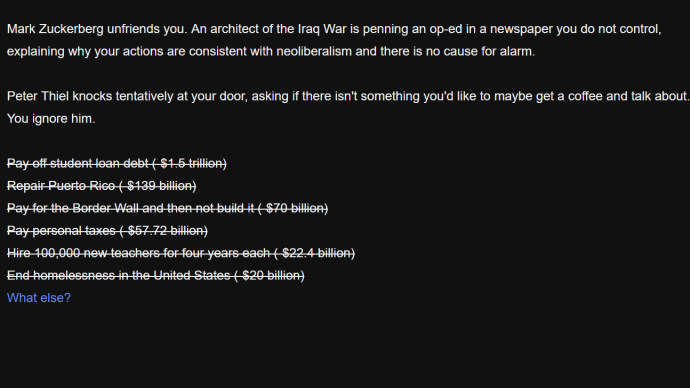 You Are Jeff Bezos is a wild game about waking up and discovering that you (and I'm so sorry to have to tell you this) have become Amazon CEO Jeff Bezos in some horrific Kafka-esque nightmare scenario. You must take on this knowledge and decide what you are going to do with your sudden vast amounts of wealth. Will you go to the bathroom? Will you scream and sob with terror over this unnatural event? Or will you spend all of his fucking money?

You Are Jeff Bezos kicked up a bit of press after its release, but if you haven't played it yet I urge you to give it a try. It's a provocative piece of political media made with bare-bones tech (I love playing a Twine game in 2019!) and I think it sits neatly in game-zine territory. 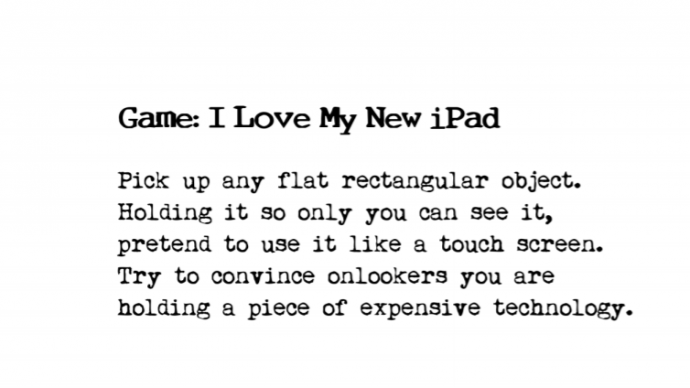 Of course, what list of zines would be complete without mentioning the videogame zine queen herself, Anna Anthropy? Anthropy's 2012 book, Rise of the Videogame Zinesters: How Freaks, Normals, Amateurs, Artists, Dreamers, Drop-outs, Queers, Housewives, and People Like You Are Taking Back an Art Form has been a staple in game studies groups and maker circles since its release. Her Game Poems Zine, released last year, is a compilation of short games which were originally posted on Twitter. The game "Wanna Drag?" encourages you to invent up a backstory for two cars stopped at a red light, just before they take off racing. Some games are more political, designed for protesters to keep track of cops. Some are philosophical musings on the existence of god.

The book reminds me of Yoko Ono's performance book, Grapefruit, a "book of instruction and drawings." There is a tongue-in-cheek nod to another performance artist in the book, Marina Abramović, which opens the book. "Game: The Artist is Present. Go to a gallery and stand by a painting. Introduce yourself to visitors as the artist and offer to answer any questions they may have."

The best games and the best art are messy little provocative pieces of paper and PDFs and GIFs and feelings all stuck together with Pritt stick and zips.