Look. Sex is complicated. For those who have it, it's a melange of vulnerability and tenderness and pleasure -- or perhaps sex has become rote muscle memory. Maybe it is, instead, consensually brutal. Sometimes there are genitals involved in sex. Sometimes there are facsimile genitals. Maybe there's an orgasm, or two, or four, or five, or zero. Two people, four people, more people, one people. Sex is a wildly complicated interconnected series of questions, conversations, yesses, maybes, nos, agreements, disagreements, and (crucially) respect. Or consensual disrespect. Ultimately, one hopes, despite all of this, sex is as easy as breathing.

Here are some games which consider sex from all sorts of angles.

Robert Yang's Hurt Me Plenty, but more specifically the up-to-date version in the Radiator 2 Bundle 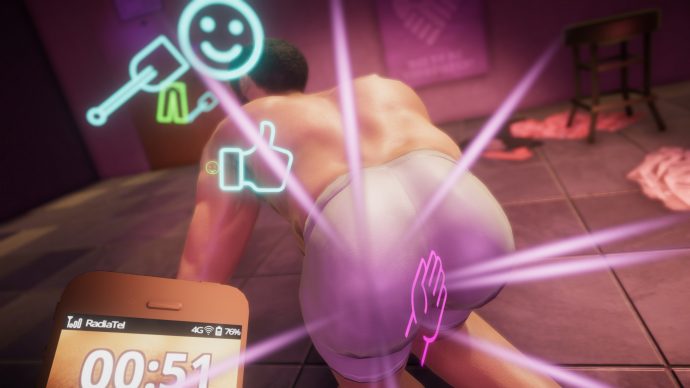 To talk about games and sex and to omit Robert Yang would probably be akin to heresy. Many of the games available on Yang's itch page deal frankly with the subject, making it a point to use hyperrealistic masculine bodies. I am partial to Yang's work in part because he writes about it extensively. For example, here is his statement on Hurt Me Plenty. The academic in Yang speaks to the academic in me. In my academic future, I'd love for someone to let me write about the Radiator 2 "gay-sex-triptych" and Francis Bacon, but maybe that's some other time?

Anyway. In Hurt Me Plenty, "you spank the heck out of a dude and learn about how BDSM communities attempt to formalise consent/caring." It is Yang's attention to care, consent, and communication that I really want to highlight here, before any of the next games. Yang does not shy away from hyperrealism, instead, using "realistic representational graphics as a critique of the sex in contemporary Western video games with similar graphics." To bring an attention to care in this hyperreal graphical mode troubles many Western porn-informed approaches to sex and games. Instead of overly-cutesy and abstracted allusions to sexuality, there is body hair and sweat. Instead of "a cutscene of two virtual dolls glaring at each other for a few seconds, with cold unfeeling eyes devoid of human warmth," you rub your partner's back in a display of after-care. Yang wants to question the "pet-management" games of transactional sex, and explore what else there can be. He does it with humility and great jiggle physics. 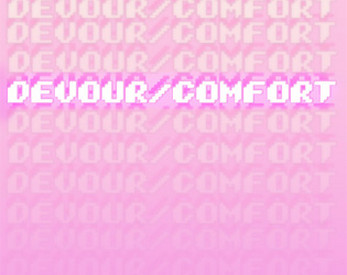 DEVOUR/COMFORT, from Colin Spacetwinks, is billed as a "SOFT VORE game," which means that while it is a game about being eaten, there is "no teeth, no biting, no blood, no messiness, and no digestion. Much like Jonah inside the whale, should you succeed, you'll eventually just be spit right back out - in an entirely non-gross fashion, I promise." If you think that has the possibility to be enitrely non-gross, keep reading.

In DEVOUR/COMFORT, you must convince a dragon to eat you. It's not like she doesn't want to eat you -- it's just that she wants to have a conversation about it beforehand. After all, she says, "Doing something like this with someone else, even when it's about arousal, it's not just about arousal, because if it was, it'd just have to be about what you feel. But what I feel is just as important here." And then, if you are honest, the dragon will swallow you whole. When it comes to kink, I think vore can divide folks. I don't think videogames can truly teach any experience, especially sexual ones, I think there's something to be said about safely exploring a kink which interests you through games like this. Maybe it gives you a safe avenue to explore with a partner, and maybe you give it a quick look and go, "Eh, not for me." And perhaps we're all the better for it.

If all that interests you, then I present Magical Maiden Madison for your consideration. MMM is far tamer than Ladykiller, though it offers a glimpse into the driving force behind some of its BDSM elements. You are Madison, a Magical Girl, texting your friend Amy about your hard day saving the world. Some evil creep monster interrupted your date, and you totally had to fight him, which like, mega sucked. Anyway, when he pins you to the wall with his vine tentacles, you sort of start feeling... a little funny? You still totally beat him up... But you kind of need to process your feelings about being tied up by vines!!!