Radical Heights is the 80s retro battle royale blastathon that's the newest kid on the battle block. Whether you like shooting up arcades or shooting up other, different arcades, Radical Heights has you covered; all wrapped up in a sense of gnarly attitude not seen since Sunset Overdrive. That's right, I invoked Sunset Overdrive in the first paragraph. I'm on a warpath today. Sorry, back to the issue at hand: Radical Heights has a second update that introduces a number of new elements to the game. This includes bug fixes (obviously) but also a range of BMX bikes and bike ramps and cosmetic options. There's also a scanner that reveals enemy locations on the map. That's the bigger thing. Unless you're into battle royale games for the bike ramps. TBH a Paperboy Battle Royale does sound kinda great. I just want to deliver newspapers and murder indiscriminately. Give it to me.

Radical Heights is in Early Access right now, and is trying to add game elements into their game as quickly as possible, because it's frankly a little barren right now. So it's pretty killer to see the introduction of J.A.N.U.S. -- an item which briefly reveals the location of all enemies on the map. In a game where finding enemies to kill is currently something of an issue, an enemy location revealing device seems like a keen addition. 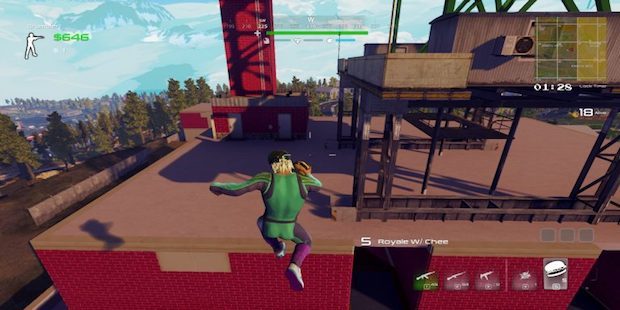 Our Premature Evaluation of the game was one of the harsher reviews I've ever read on the site. I mean, harsh in a clearly earned way. Fraser has some blistering lines in here, including "If Radical Heights was any more early access, we might well be trying to play a design document." Get some ointment for that burn, Boss Key Productions. I wanted to quote several entire paragraphs from the piece, but this one sums it up best:

Across the five or six matches my friend could stomach, I can’t remember a single enjoyable moment because they either devolved into a run-of-the-mill last man standing affair or ended before we’d had enough time to do much of anything. We’d drop in, frantically trying to find each other, because there’s no bus or plane and everyone starts freefalling immediately, and then desperately hunt for some guns. That’s usually when death struck, though sometimes we’d find guns without ammo and ammo without guns.

That said, we also have an excellent interview that reveals the team's motivations, and what they learned from LawBreakers, and what they're trying to do with RH. In total fairness, you should give that a read too.

*most Bart Simpson voice*
In conclusion: Radical Heights is a land of contrasts. Thank you.

Grab the game on Steam.