Razer's Deathadder and Basilisk mice are some of the most popular gaming mice on the planet, and today Razer have unveiled V2 models of each one. Upgraded with flashier sensors, superior switches, more buttons and braided, shoelace-like cables, the Deathadder V2 and Basilisk V2 are primed and ready to compete with all of our best gaming mouse contenders from 2019. Here's wot I think.

Starting with the Deathadder V2, Razer's latest iteration of their classic gaming mouse now comes with even more features than their top-end Deathadder Elite. With the latter currently sold out on Razer's website, I'd imagine this will be a direct replacement for the Deathadder Elite, especially since it has a faster 20,000 DPI sensor (up from 16,000 DPI) as well as new Razer optical mouse switches, which use infra-red light to register a click, instead of the Elite's older mechanical ones. Razer have also given it a new sweat-resistant coating so it doesn't pick up as many greasy hand prints, and they've added a profile cycle button to the mix as well (albeit on the bottom of the mouse, making it next to useless for everyday use), bringing the total number of programmable buttons up to eight.

Despite all the design changes Razer have made to the Deathadder V2, it's surprisingly light in the hand, weighing in at a mere 82g. While not quite as featherweight as the Glorious Model O- or Razer's Viper mouse, it's still a lot easier to swish around my mouse mat than other big, palm-filing mice I've tested in the past. If anything, it almost feels a bit too flimsy for such a large mouse, especially compared to the similarly-sized Basilisk V2 (but more on that in a bit). 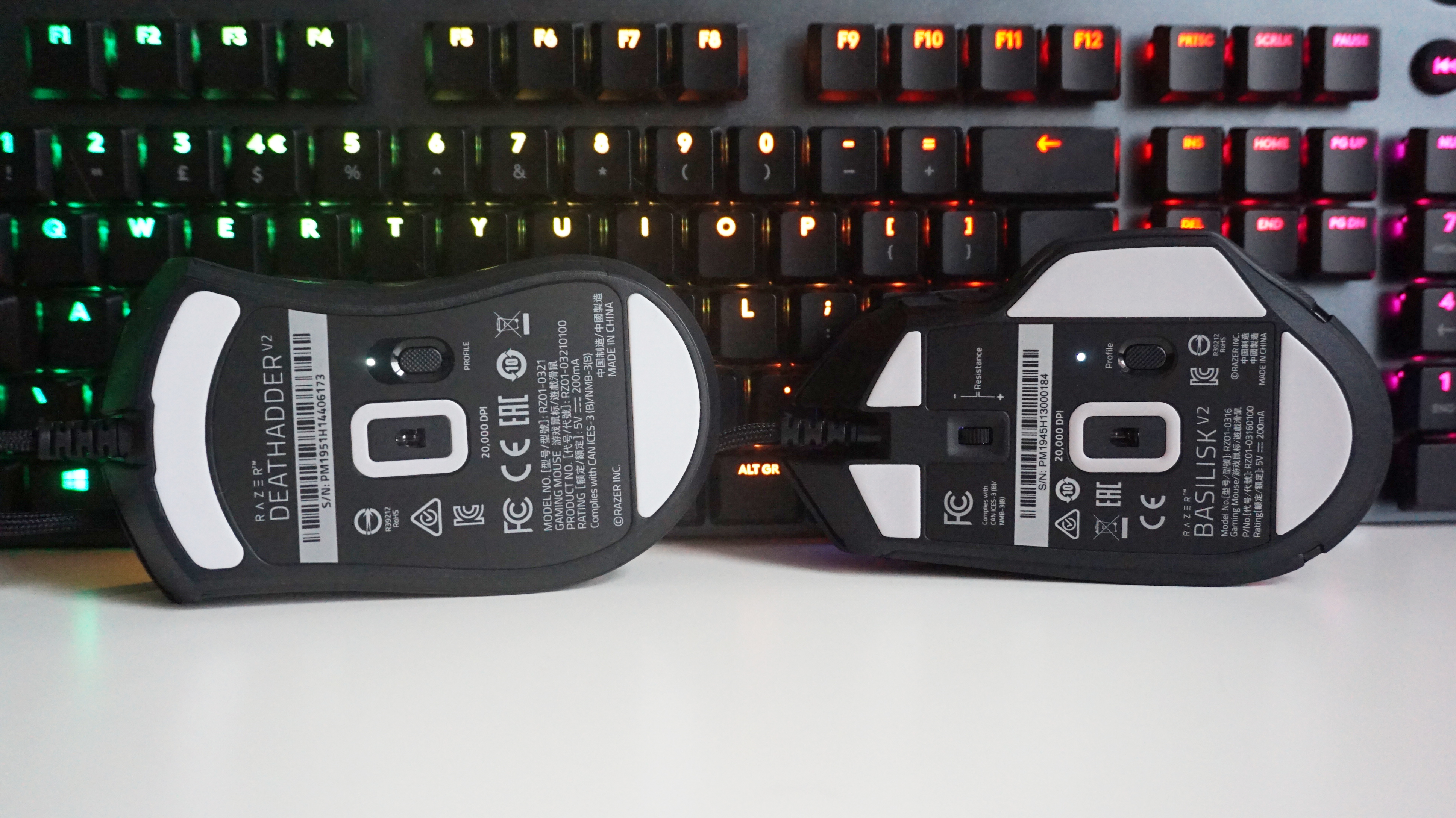 Still, however you feel about the weight of the Deathadder V2, its large pair of side buttons should fall within easy reach of all thumb sizes. Even with my titchy girl hands didn't have a problem hitting the Deathadder V2's buttons, and the clear break between them made it easy to tell them apart by touch alone. Like the rest of its buttons, they can be customised to perform all manner of functions using Razer's Synapse software, too, and if you assign one button to act as Razer's HyperShift function, each one can be assigned a secondary function as well.

In addition to your usual keyboard and mouse functions, you can also assign macro commands, lighting profiles and multimedia controls to them, as well as use them to perform Windows shortcuts or launch applications. You can also use them to change the mouse's sensitivity or DPI speeds. The central two buttons below the scroll wheel do this by default, allowing you to cycling up and down through its five preset speeds (which you can customise anywhere from a dead-slow 100 DPI all the way up to its stupidly fast 20,000 DPI), but you can also change the DPI speed on the fly by enabling Razer's sensitivity "clutch" feature. This functions much like the "sniper" buttons you see on other gaming mice, altering your mouse's DPI speed to a set level for as long as you hold down the mouse button, and can be useful for lining up things like headshots or panning slowly across a MOBA lanes, for example.

Admittedly, all this is part and parcel of any Razer gaming mouse these days, so this kind of customisation is somewhat expected - especially when the Deathadder V2 is set to cost a sizeable £70 / $70 when it releases later today. For that kind of price, you'd jolly well hope it could do all those things and then some. 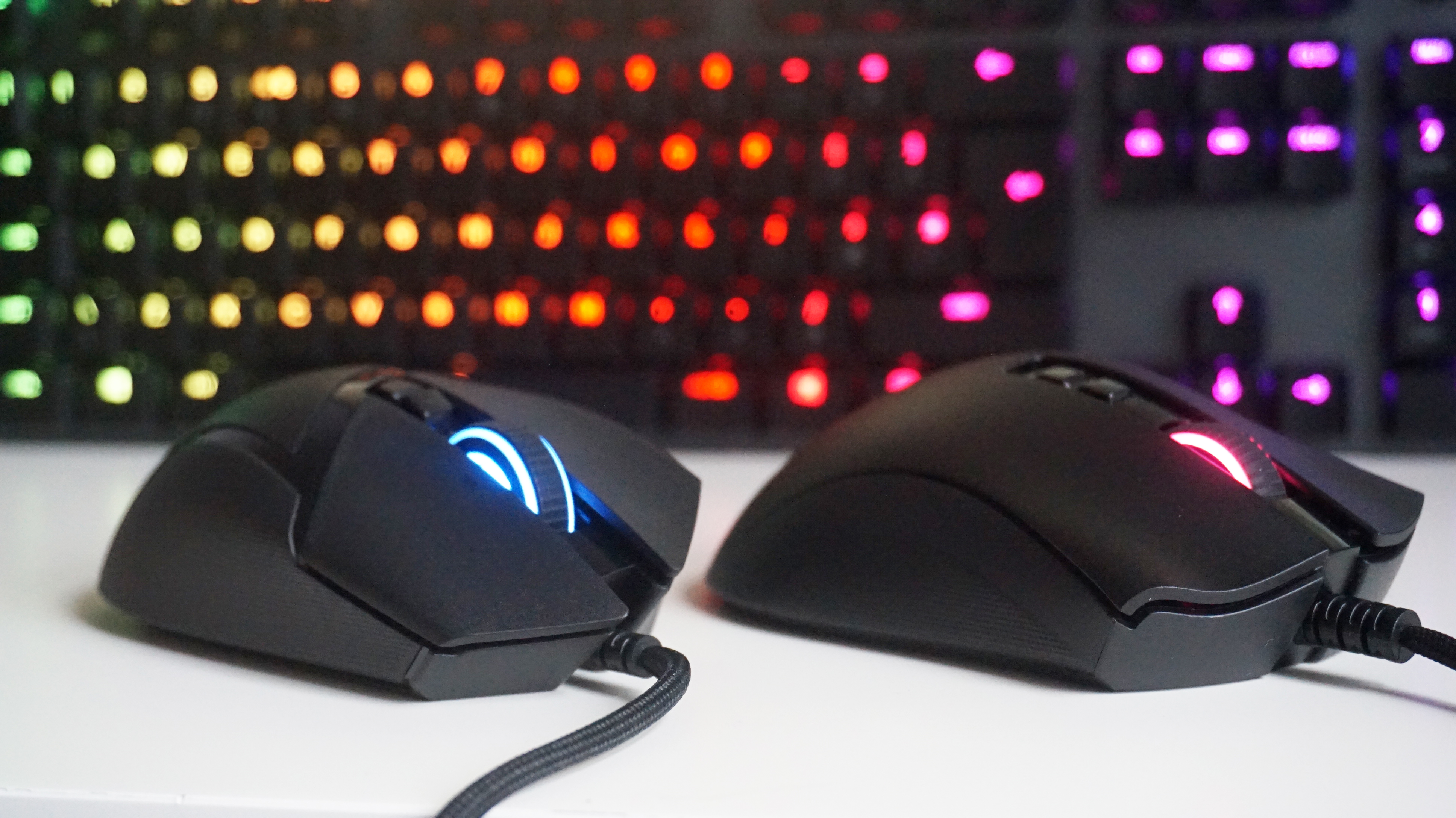 Naturally, this also means the £80 / $80 Basilisk V2 has pretty much exactly the same kind of functionality as its new Deathadder sibling - at least when it comes to software, that is. What sets this mouse apart is its adjustable scroll wheel, giving you more control over the amount of resistance you get when you move it up and down. Ranging from big, chunky, clicky steps to a near-continuous glide, it's very reminiscent of the scroll wheel on Logitech's G502 Hero. Thankfully, it's not just one or the other here like the G502 Hero. Thanks to the inclusion of a tiny resistance wheel underneath the mouse, the Basilisk V2 lets you set the force exactly how you like, making it feel a lot more versatile than its Logitech rival as a result.

The G502 Hero similarities don't stop there, either. Razer have also given the Basilisk V2 the same number of programmable buttons as the G502 Hero, increasing the total to 11 up from eight. Admittedly, the number of physical buttons hasn't actually increased that much. You still get three on the side of the Basilisk V2 (if you count its removable paddle button) and two in the middle, as well as a new one underneath that lets you change profile. Instead, the bulk of the Basilisk V2's new programmable "buttons" are all centred around the scroll wheel. Whereas before you could only click the wheel inwards, you can now shunt it to the left and right. You can also program individual commands when you scroll up and down, too, although you'll probably want to set up a specific gaming profile to take advantage of all these scrolling options so it doesn't cause chaos when you come to use it for regular desktop tasks.

The extra buttons will no doubt come as welcome news for anyone after something a bit less hectic-looking than Logitech's G502 Hero, but I'm still not sure why you'd ever want to remove the Basilisk V2's aforementioned paddle button. It attaches magnetically to the very front of its inner thumb groove, but the strength of said magnet doesn't inspire much confidence. While it's unlikely you're going to knock it out mid-game, it doesn't require that much force to pull it off. It's something I can see immediately getting lost if I ever carry it round in a backpack, and I have no doubt that my cats would gobble up the little rubber cap the moment I left it unattended on my desk. Plus, my titchy thumb could only just about reach the very tip of the Basilisk's V2 paddle, making it a poor fit for anyone with small hands. You can, admittedly, choose to buy larger paddles direct from Razer if you do happen to find it too small, but for £80 / $80, you'd sort of hope there would be a range of sizes included in the box. 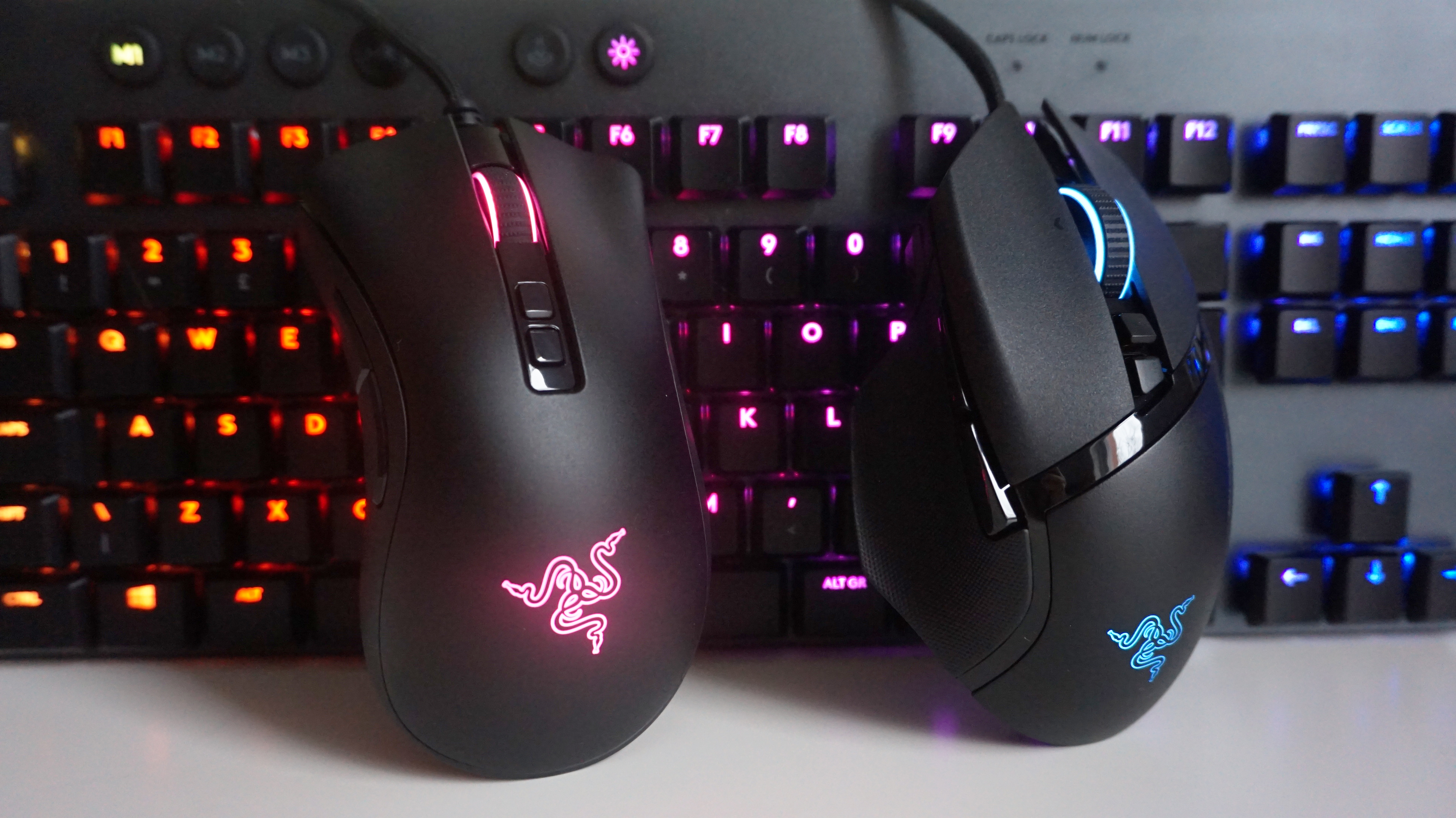 Still, button woes aside, the Basilisk's V2's other improvements are all very sensible upgrades. Most mirror what's been done to the Deathadder V2 - a 20,000 DPI sensor, optical mouse switches instead of mechanical ones, and a lighter, 92g chassis (down from 107g) - but I do much prefer its sleeker, more modern-looking design. The textured side grips are much more attractive than the thick ridges of Razer's old Basilisk, and the slice of glossy plastic across the centre of it gives it a bit more personality than the plain, matt chassis of its rather dumpy predecessor.

The main problem facing both the Basilisk and Deathadder V2, however, is their respective pricing. For the Basilisk V2, the G502 Hero is currently a lot cheaper at time of writing, going for £64 in the UK and a measly $49 in the US, and comes with additional weights to make it lighter or heavier. The Deathadder V2, on the other hand, faces stiff competition from the £40 / $53 Corsair Ironclaw RGB, which offers a very similar feature set (albeit without the option for another set of secondary functions) in another large and comfortable form factor.

The Basilisk V2 does have its looks on its side - I'd much rather have one of these on my desk than the miniature cyberpunk car that is the G502 Hero - but the Deathadder V2's altogether plainer chassis doesn't (for me, at least) really do it any favours when you put it side by side with Corsair's Ironclaw. Still, with V2 versions of these mice arriving this early in the year, here's hoping we'll see some of these improvements trickle down into Razer's entry-level "Essential" versions of these mice in the months to come.