Red Dead Redemption 2 is a world as much as it is a game, which is a fancypants way of saying there’s a lot to see and do. When I played it on console I did more of the doing than the seeing. But with the PC's photo mode, finding and photographing Rockstar's gorgeous world is reason enough to own the game. So when I heard tell of strangeness in the air, I set out to see it with my own two eyes.

My faithful steed, Trotsky, bore me to the corners of the world. To where an ancient creature lay down and took its final breath. To where the sky turns green once a night. And to where I could be as far away from Dutch van der Linde as I could get. He really is the worst.

Just west of the Van Horn Trading post, at a fork in the road, is an abandoned house. 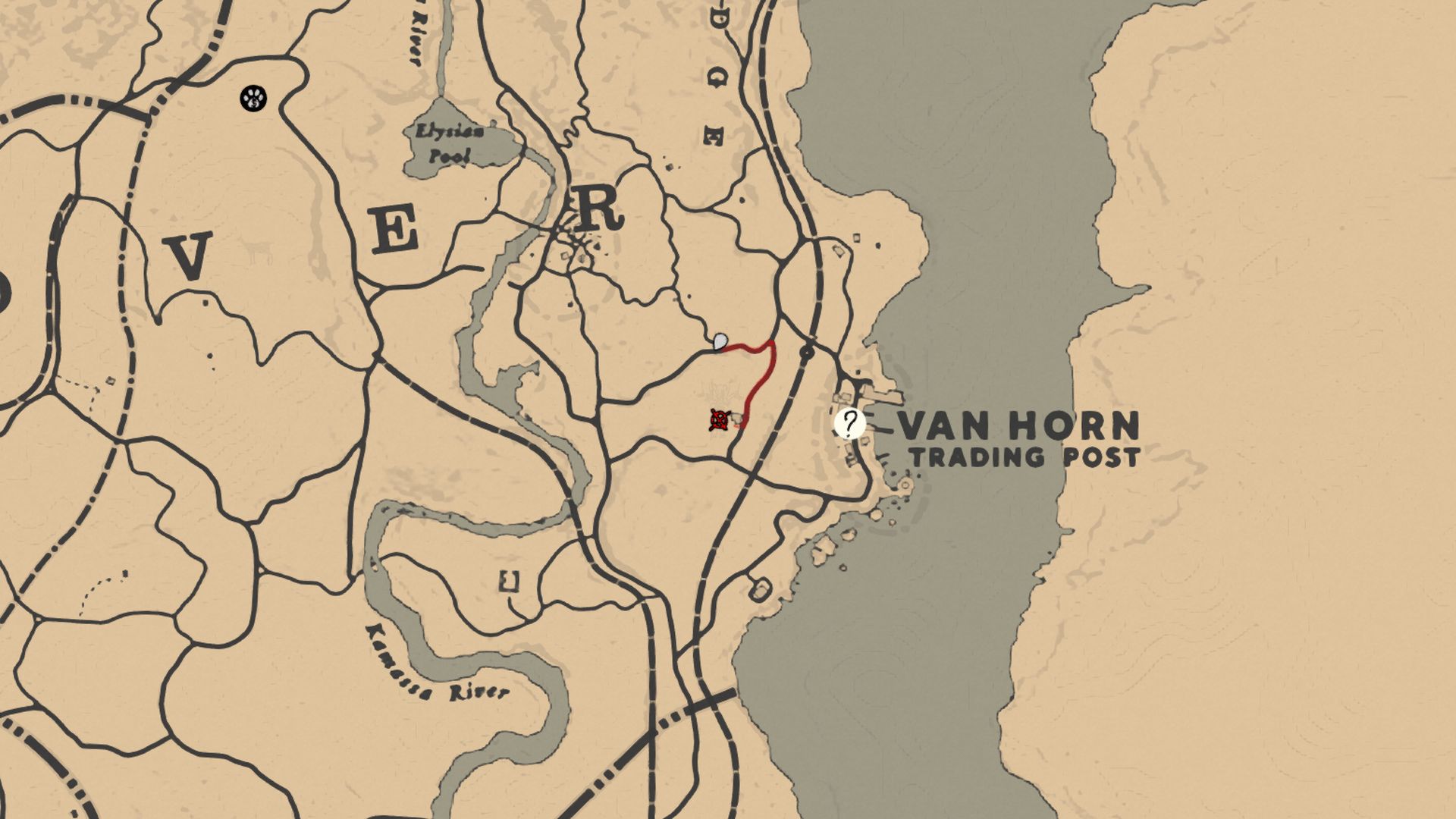 You might mosey on by, because the doors and windows are blocked and uninvitin’. But hold up, there. Wait a while and you might notice an open window on the second floor. That window can be reached, you just need to climb on the cart and drag your arse up. And what’s in there? Go on, take a peek. 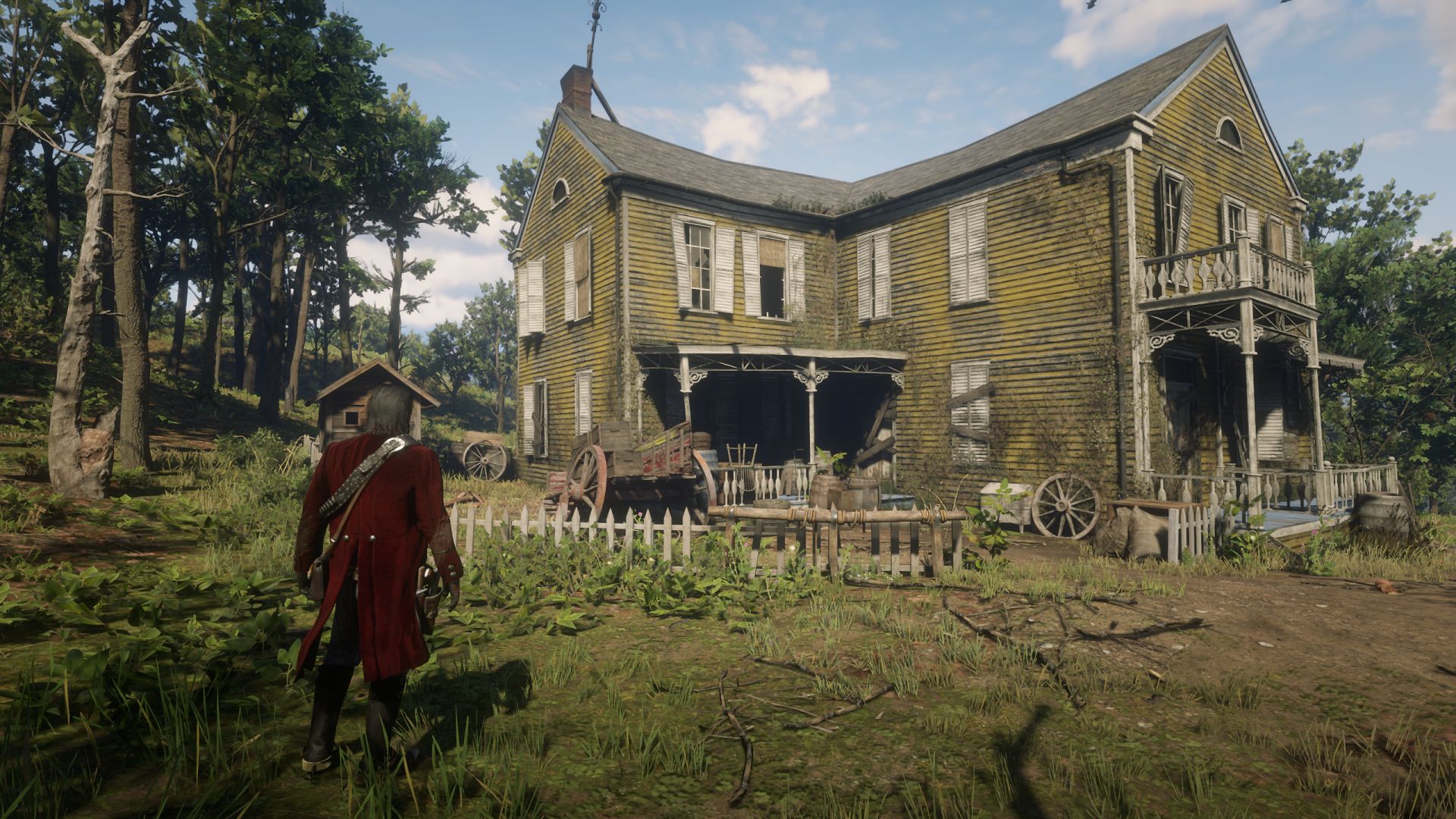 Stopped screaming? My apologies. The room is technically full of animals, just not in the correct order of parts you usually find them in. 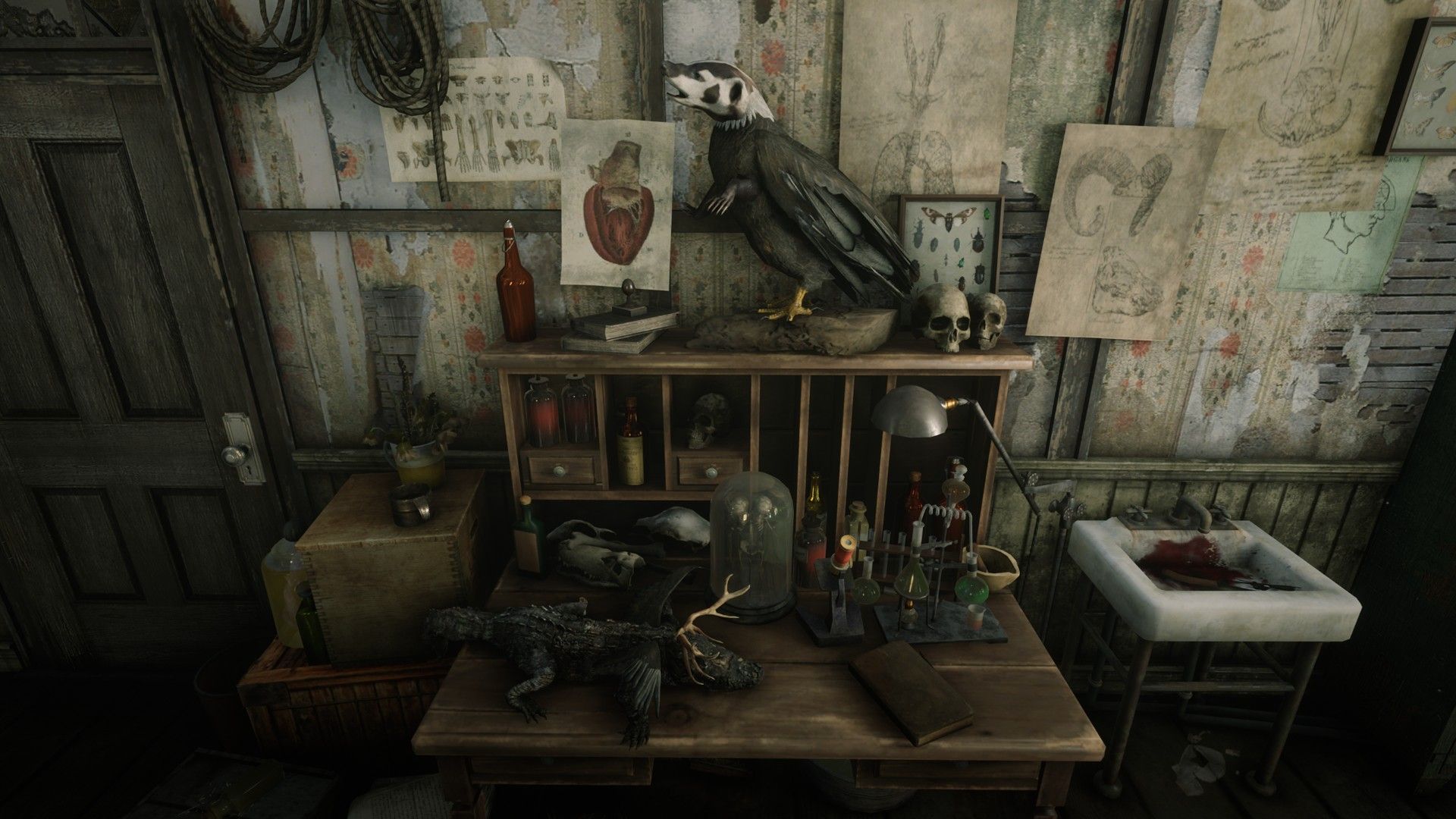 There’s an antlered gator, sketches that show plans for a human creature brain splice, and the final boss of the “experiment” hanging over everything like a monstrous messiah. It’s a boar headed and multi-limbed monstrosity that Arthur notes in his journal as a “manmade mutant” and essentially shrugs it off. You have to wonder what’s happened in his life to leave him so jaded. 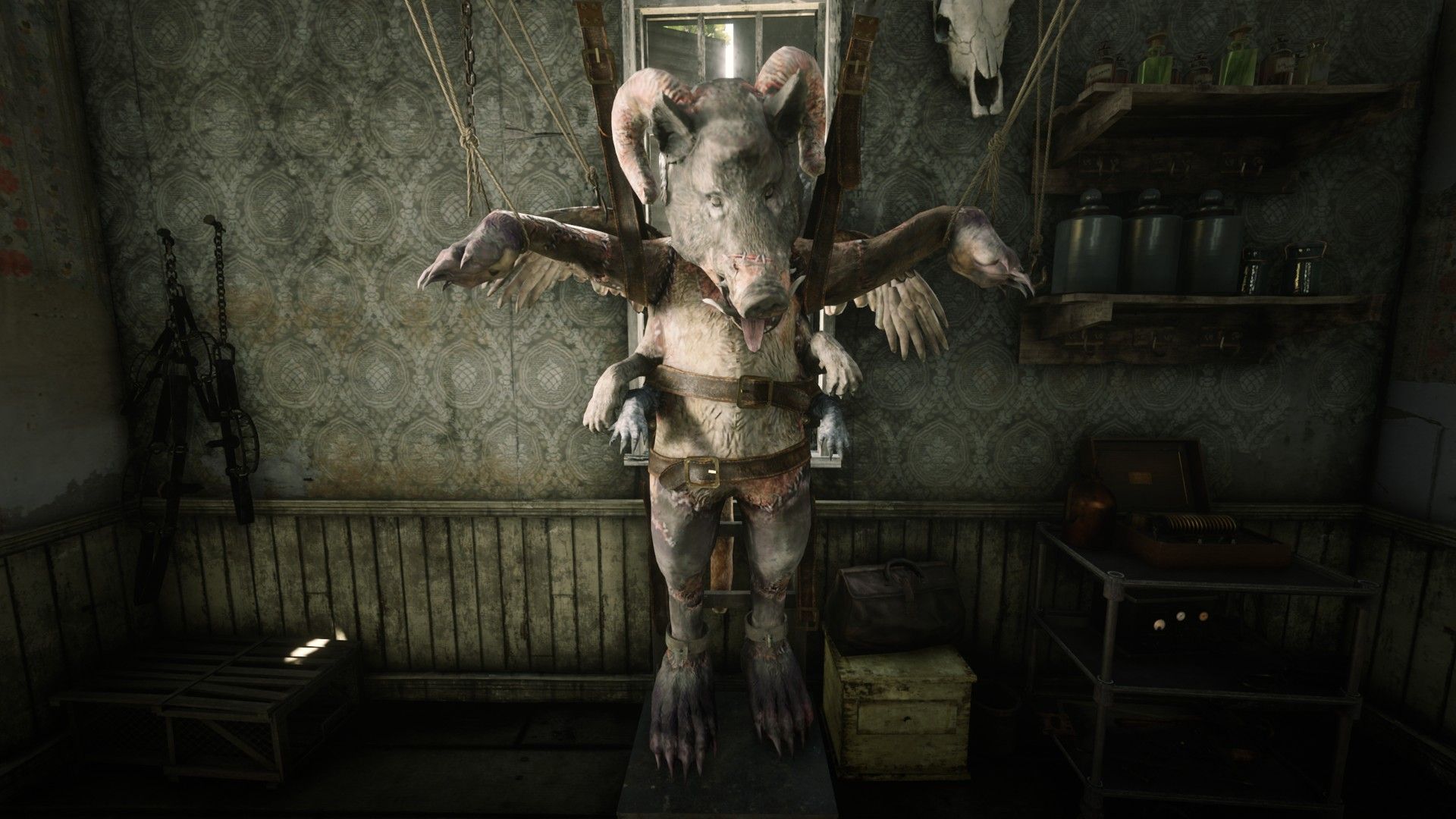 If you follow the Dakota River north you’ll come to a place called Window Rock. 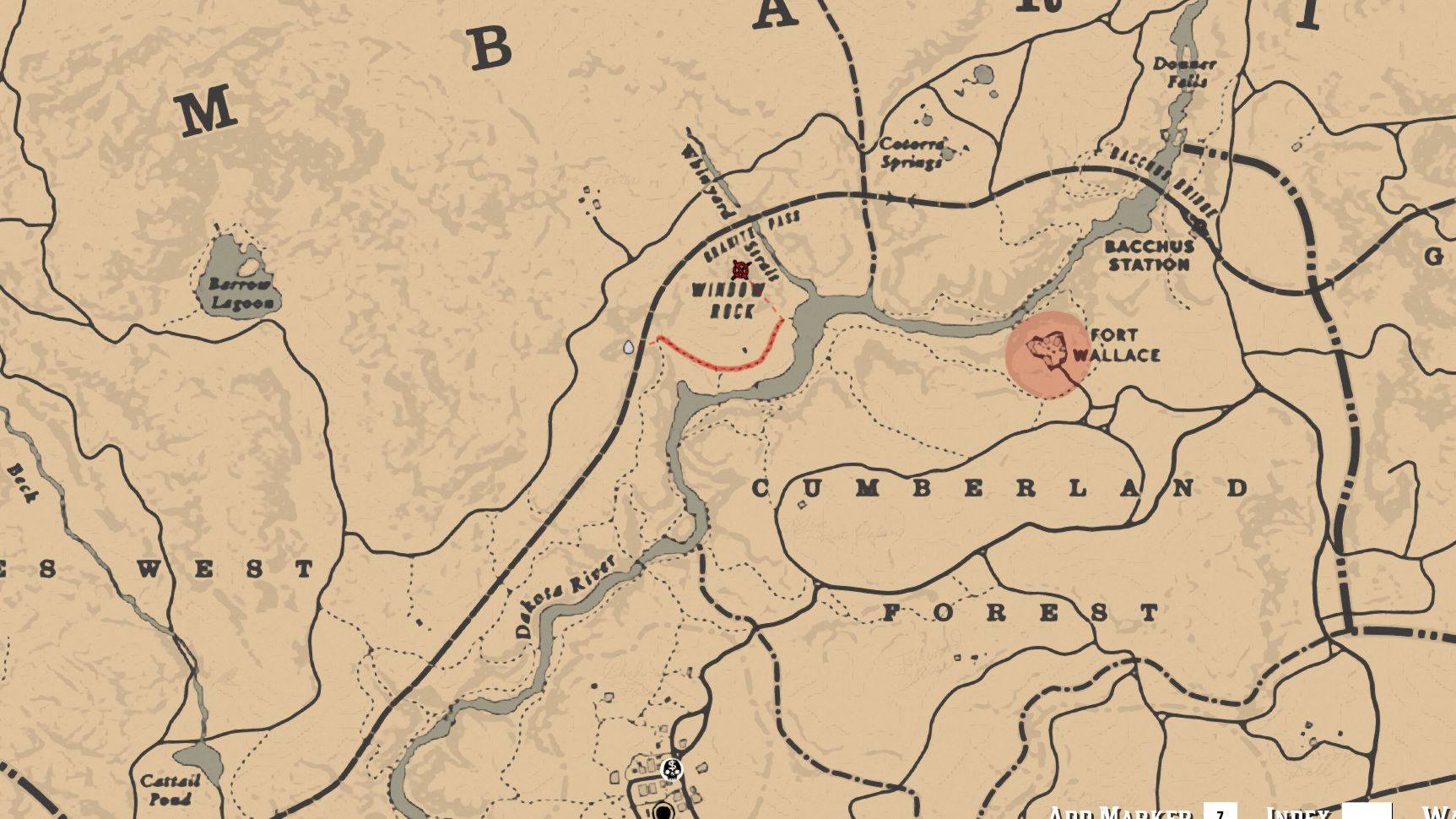 It’s an archway sitting on top of a ridge, a place that’s invitingly photogenic. Those inclined can head up just as the sun is rising, so you can frame yourself surrounded by the glow of dawn. A fine way to start the day, I tell ya. 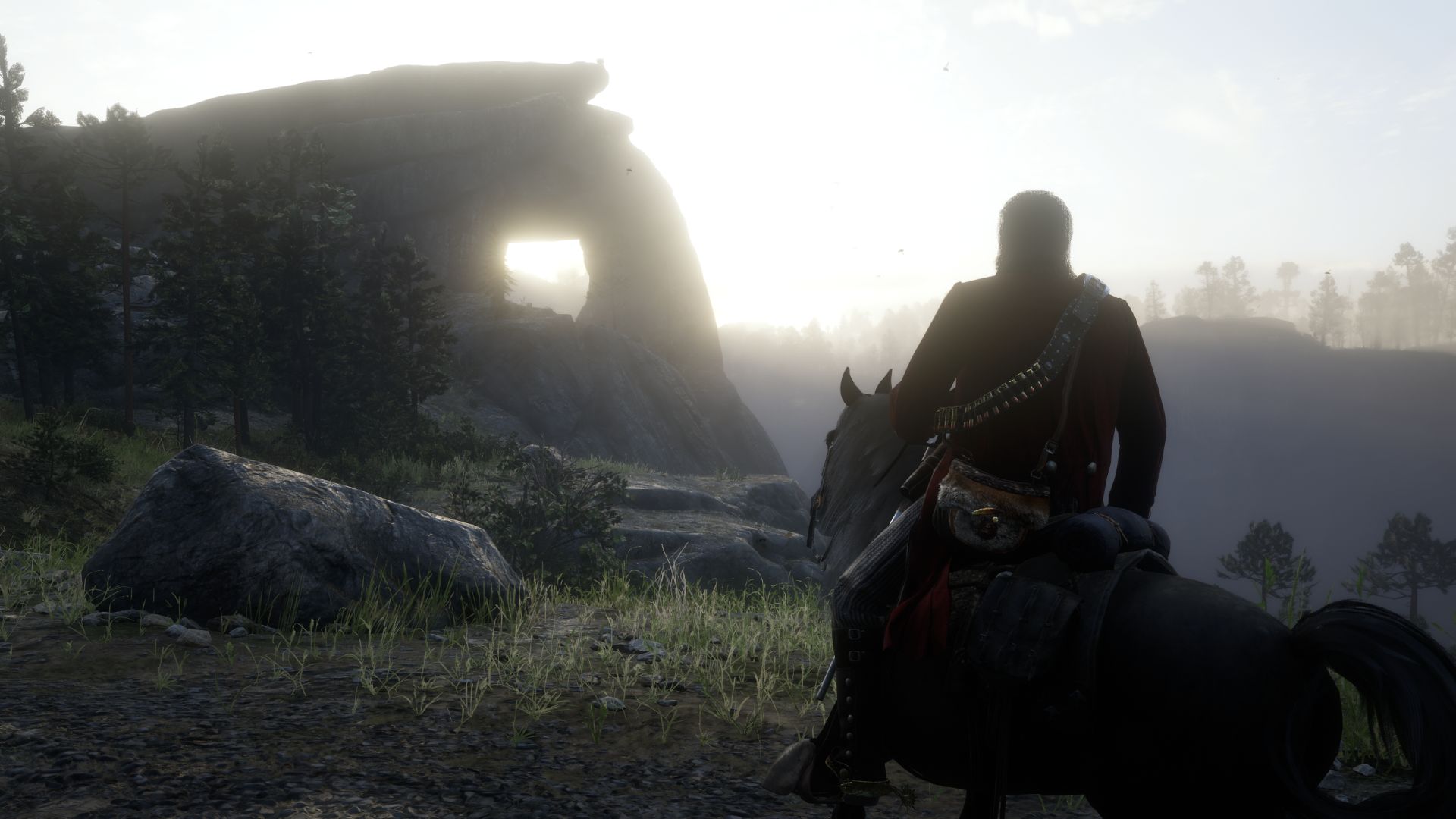 If you do, you’ll also spy an elaborate cave painting. It shows a group of cowpokes and birds surrounding a one-winged bird. Which is something you should note because it’s a place that exists elsewhere in the world. 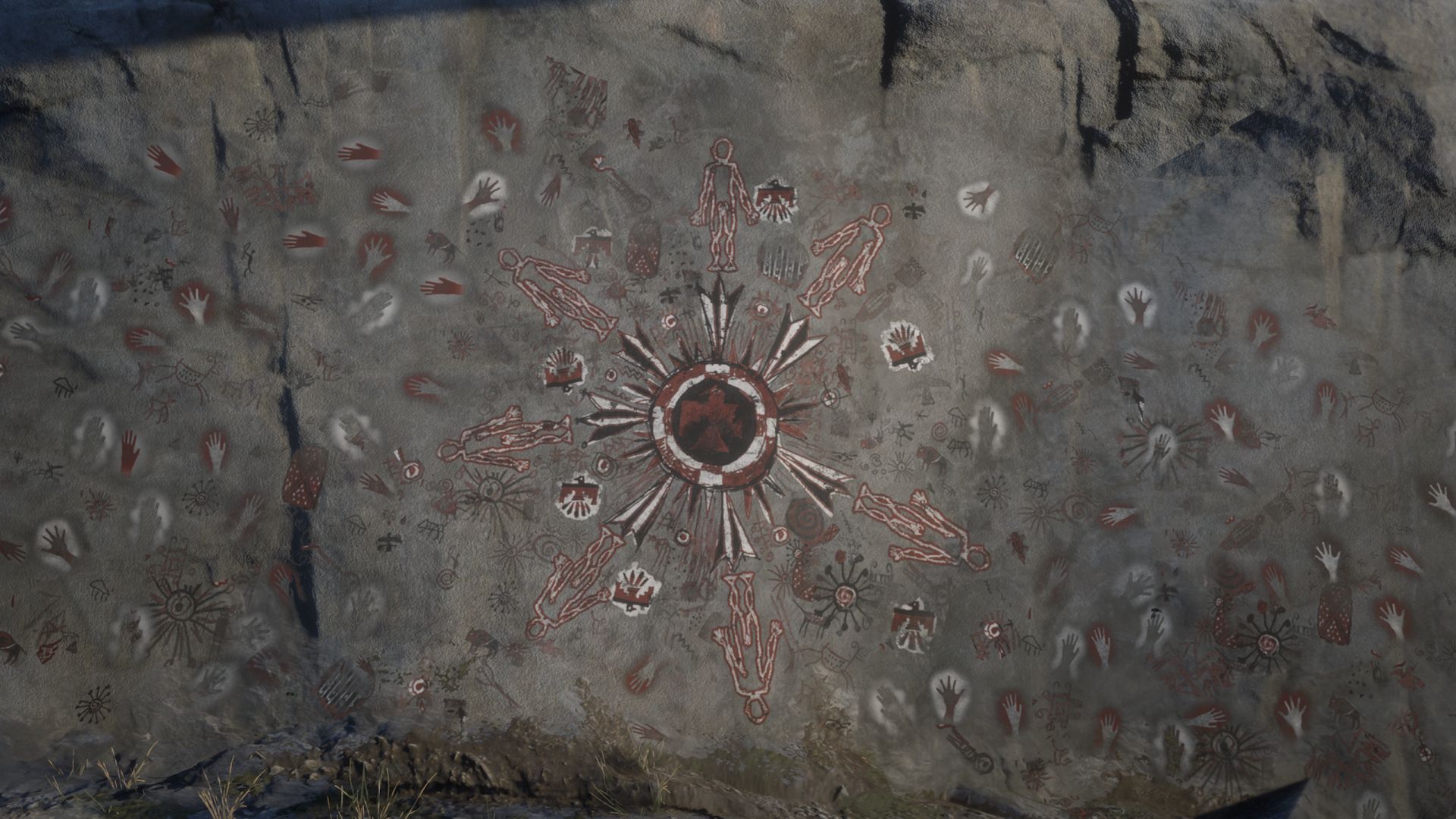 Roll out your map. See “Ambarino” stretched across the Northern territory like a rainbow? Look at the “I”, and the small road that’s immediately south. Go there. 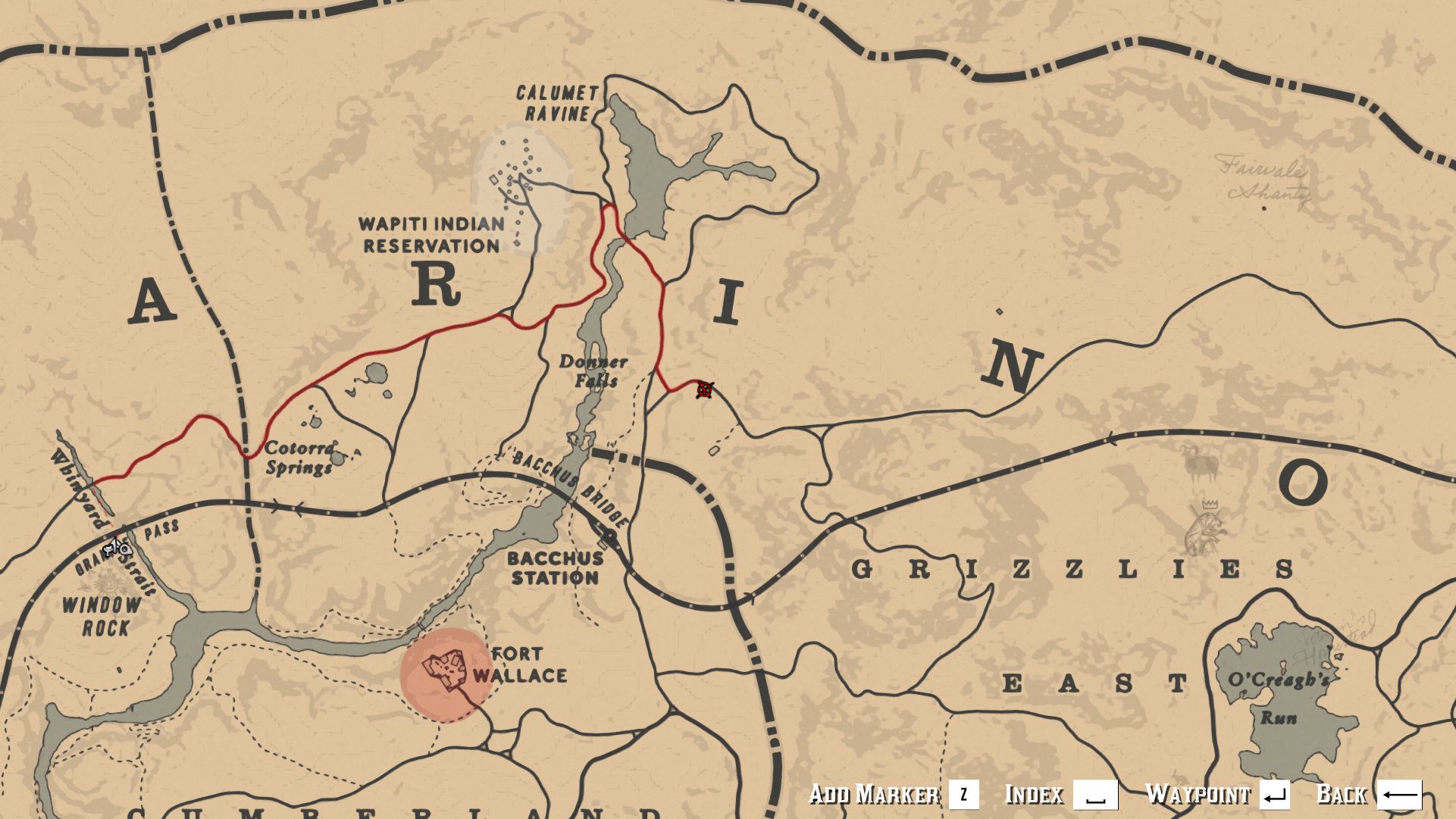 Just off the road is a clump of rocks. Walk towards them until you get to a split in the rocks with a single tree. There’s a small gap in the rocks that you can fit in. 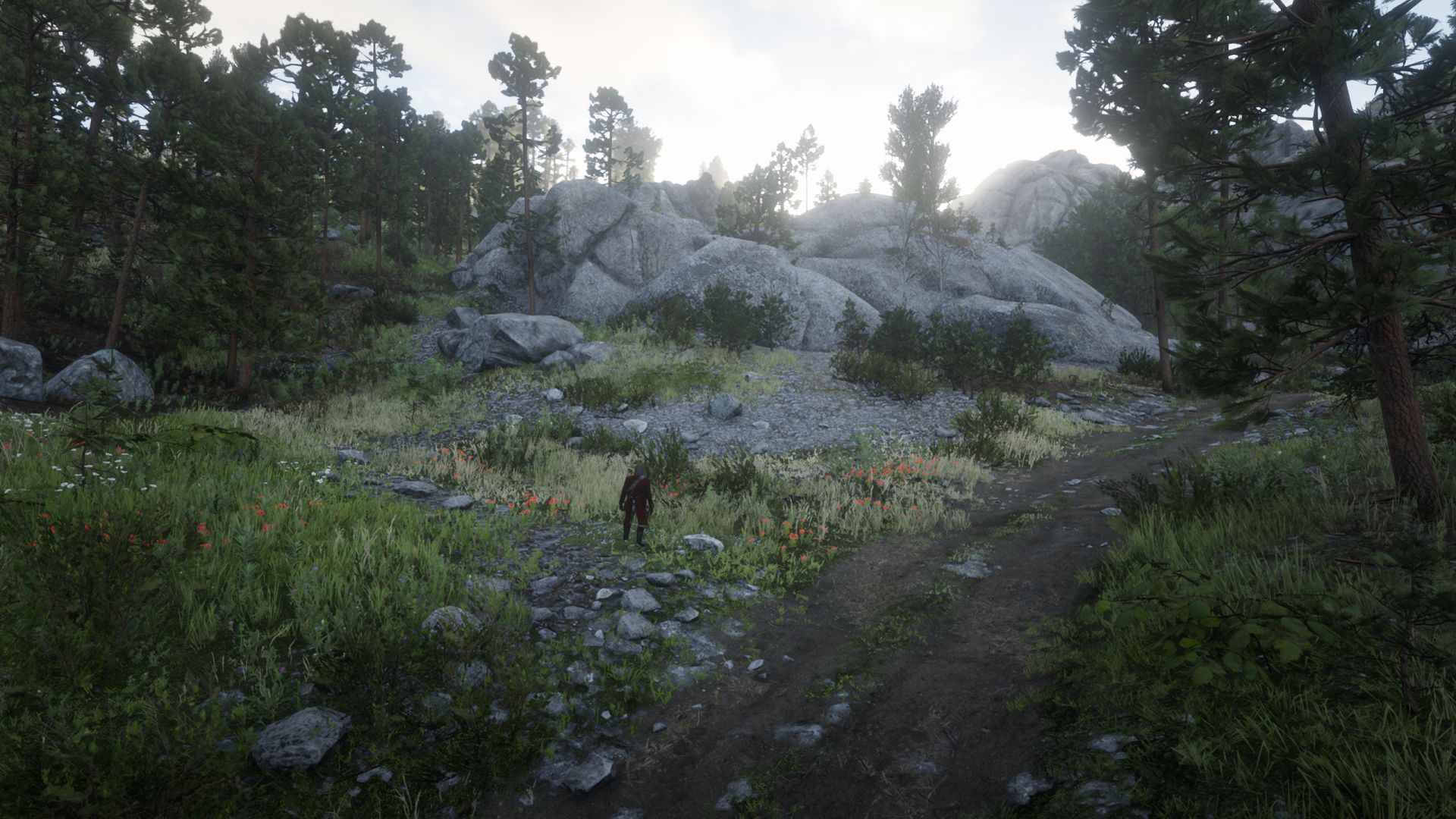 In the cave is a group of statues. They’re the centrepiece from the cave painting. Now there’s more to this little scene than meets the eye, but this post isn’t about helping you solve puzzles. Besides, if you paid attention to the cave painting, you’d know exactly what to do. 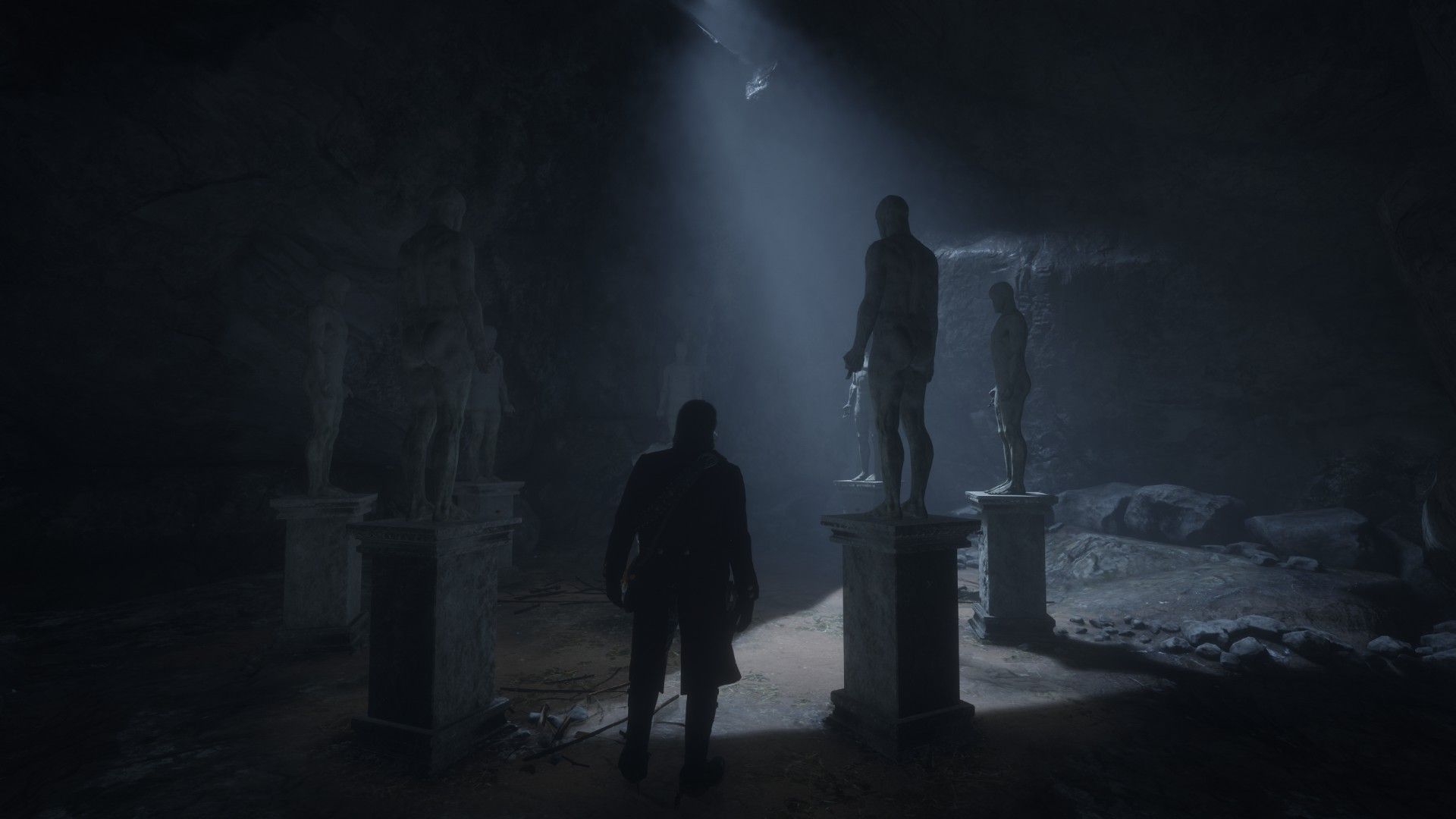 I really have to have a word with Arthur. If I’d found these statues, I’d be selling tickets and giving folk a rollicking story of adventure. He does neither. 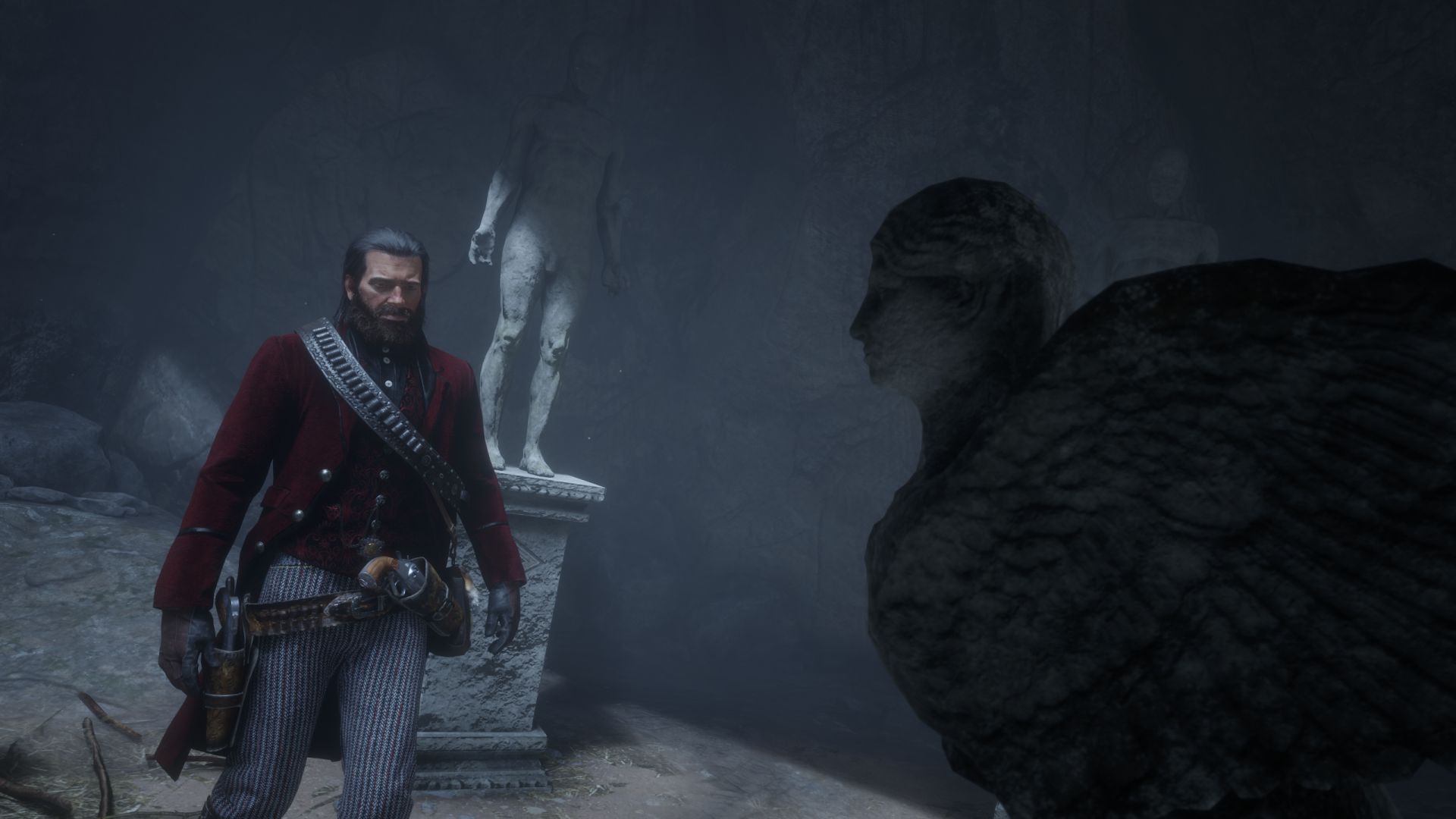 Just above the “N” in New Hanover on the map you’ll spy a small lake. Depending on the time of day you visit, you'll find different things to tell your head doctor about. 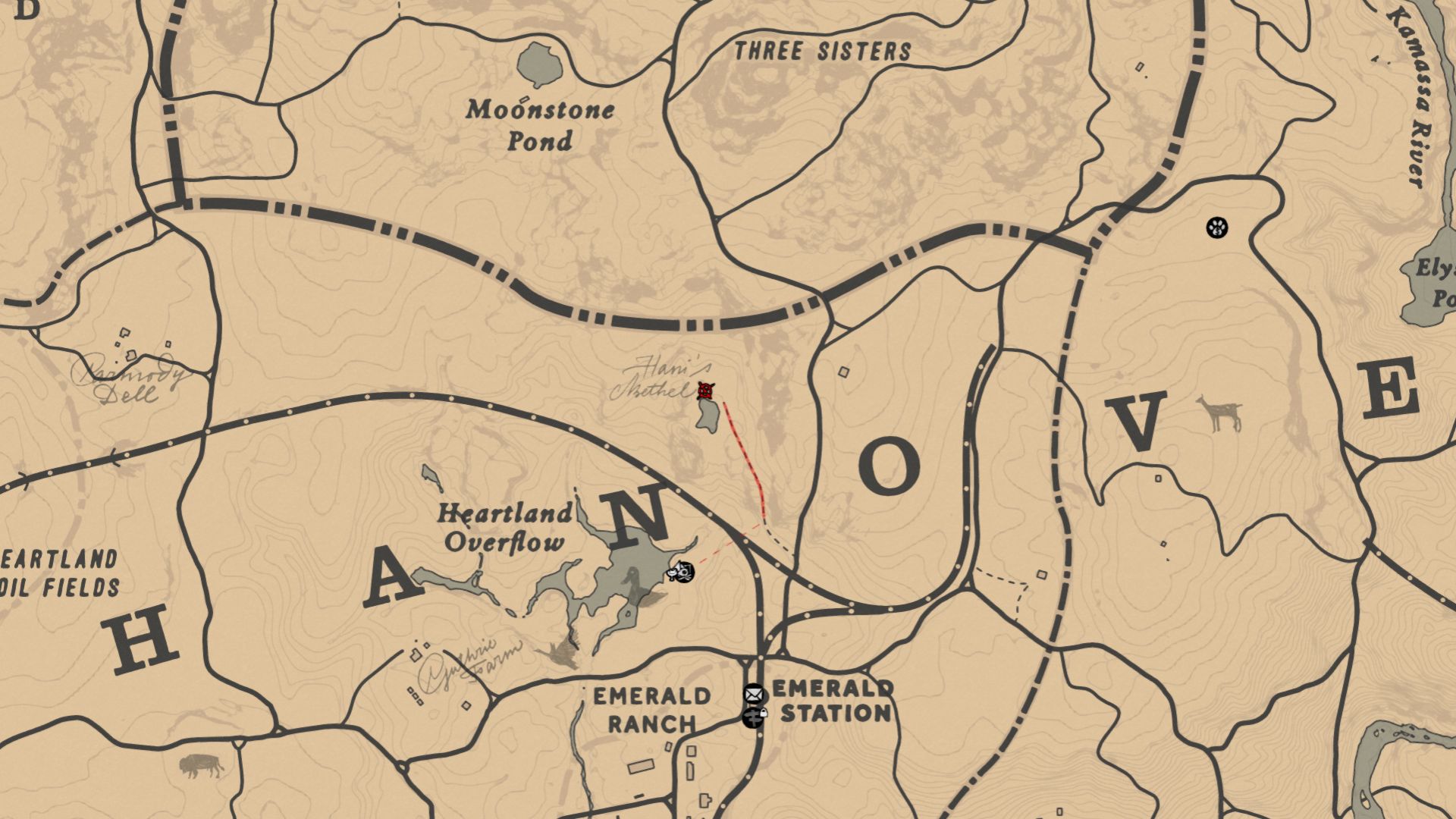 In the daytime, the shack at the end of the lake is a place where the “Loony Cult” has finally taken their leave of this world and given the undertaker a payday. It’s filled with skulls, candles, and tinctures, and each bed has a well-rotted corpse still with their boots on. A note with a sermon on it talks of a “Voyager of time and galaxies”. 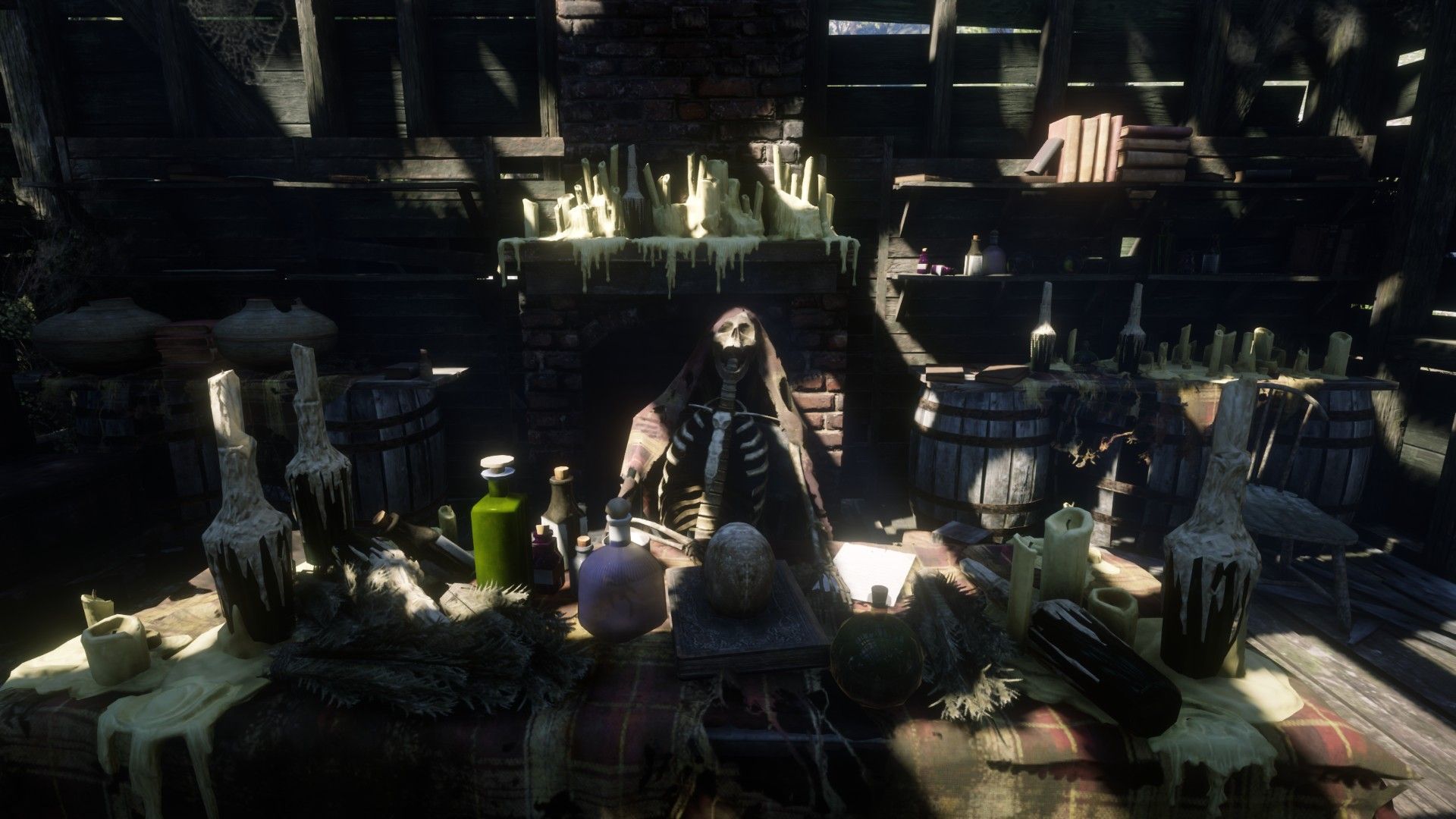 But if you return at night, you’ll discover what they were waiting for. If you enter the shack in the dark, a glowing green light spits through the broken roof and a hum suffuses the world. 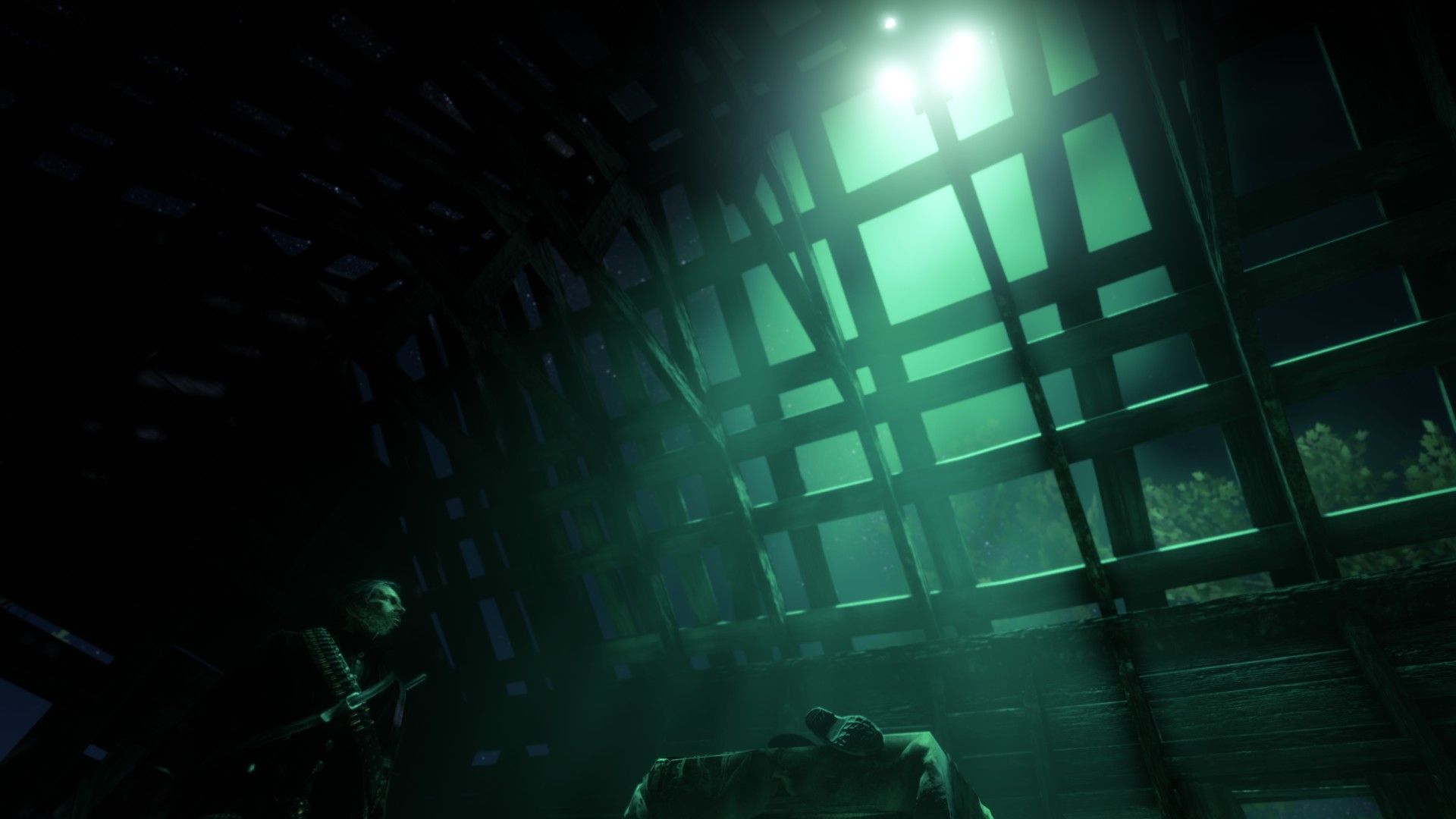 Arthur is made of stern stuff and refuses to die in awe, so the alien vessel just hovers for a while. Photo mode lets you get a decent peek at it, though you need to keep Arthur in the building. If he leaves the vessel bolts like a scared mare. 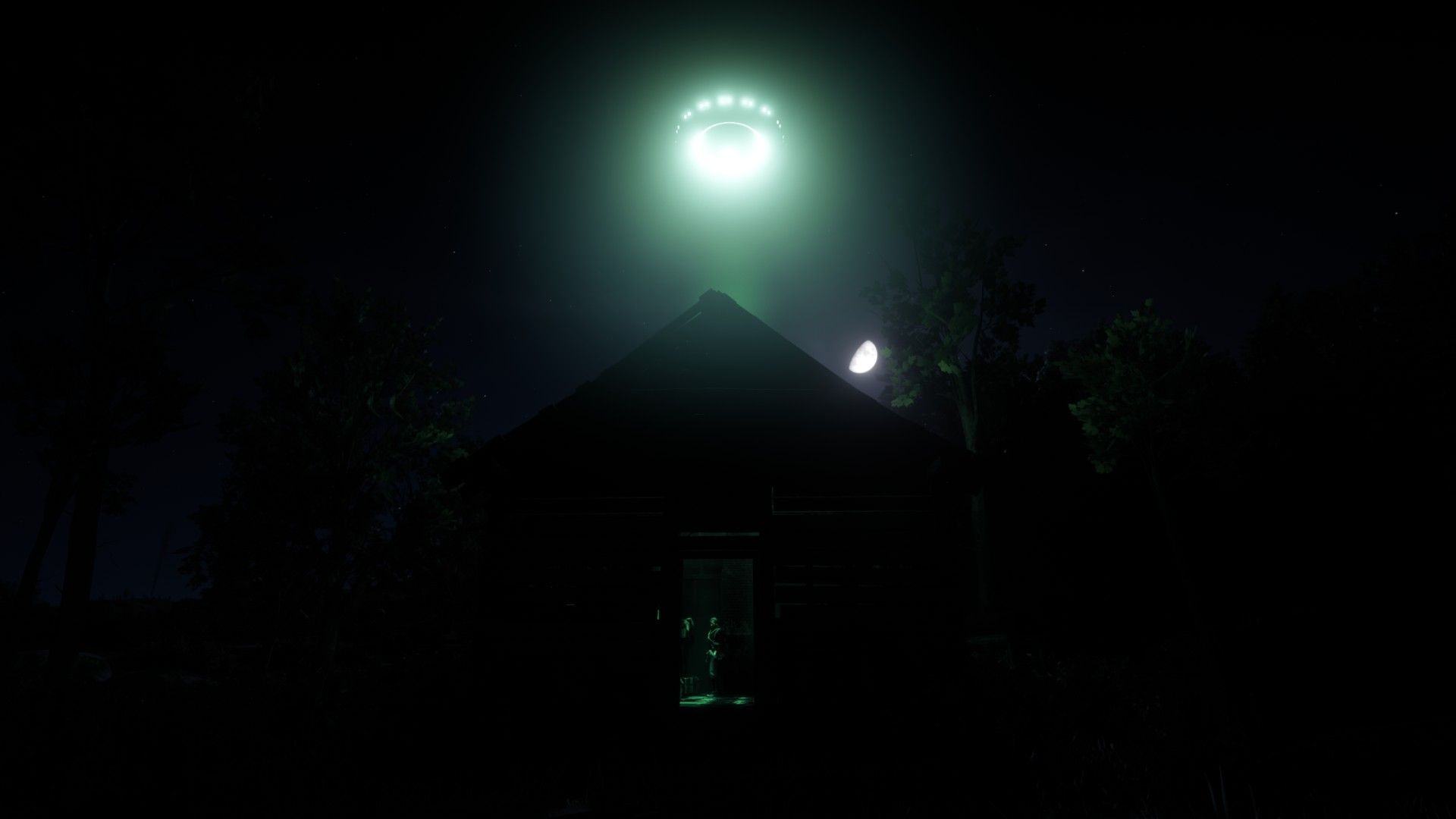 Mammoth in the Hills

This is the coldest discovery, but it’s my favourite. Unroll the map. See the area above Lake Isabella, where Deadboot Creek and Spider Gorge meet? Head there. Go on now, get goin' while there’s still light out. 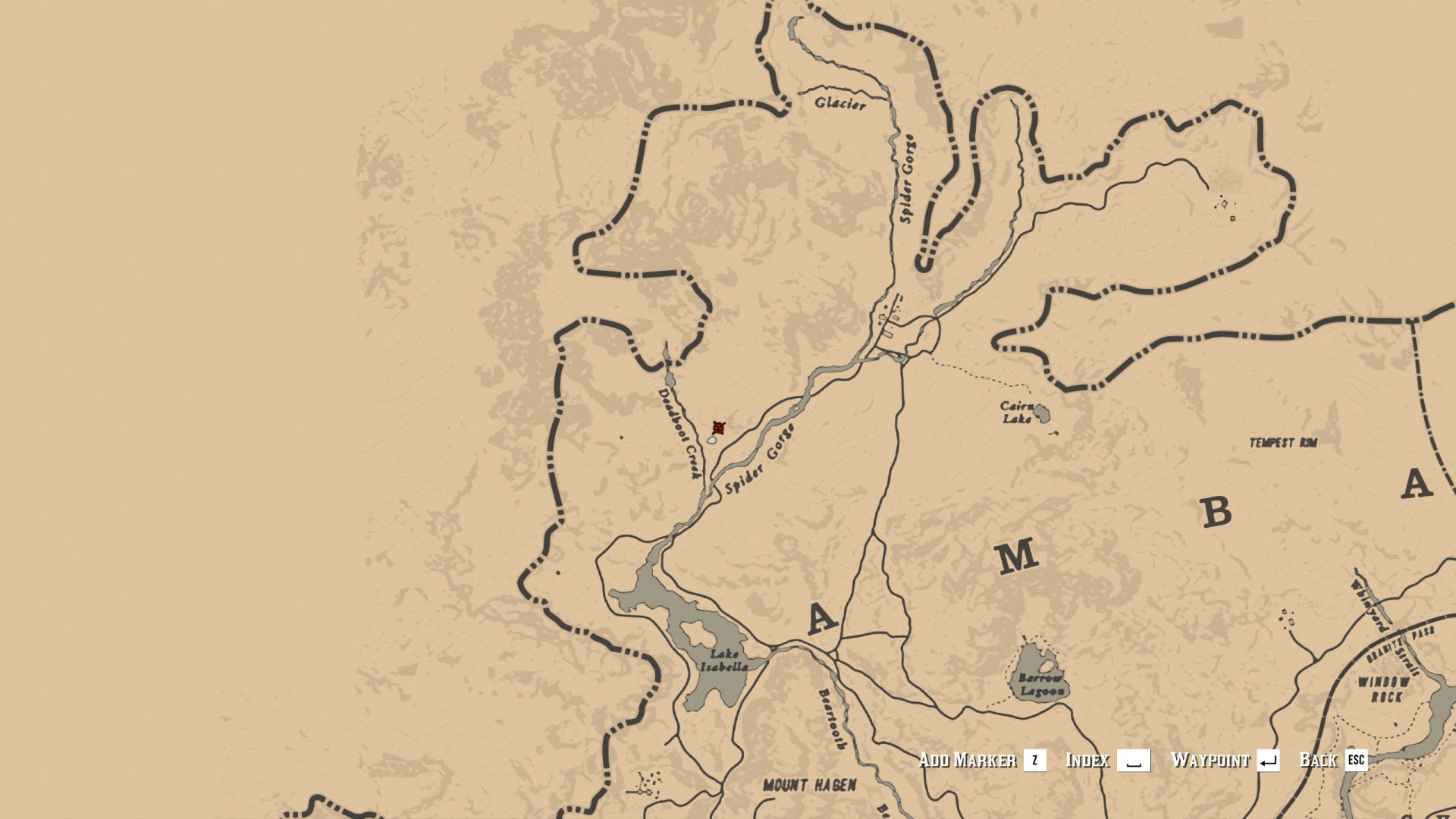 Just a little ways up from where the creeks converge, through snow so thick you could lose a mule wearing a top hat in it, is a skeleton of a mammoth. 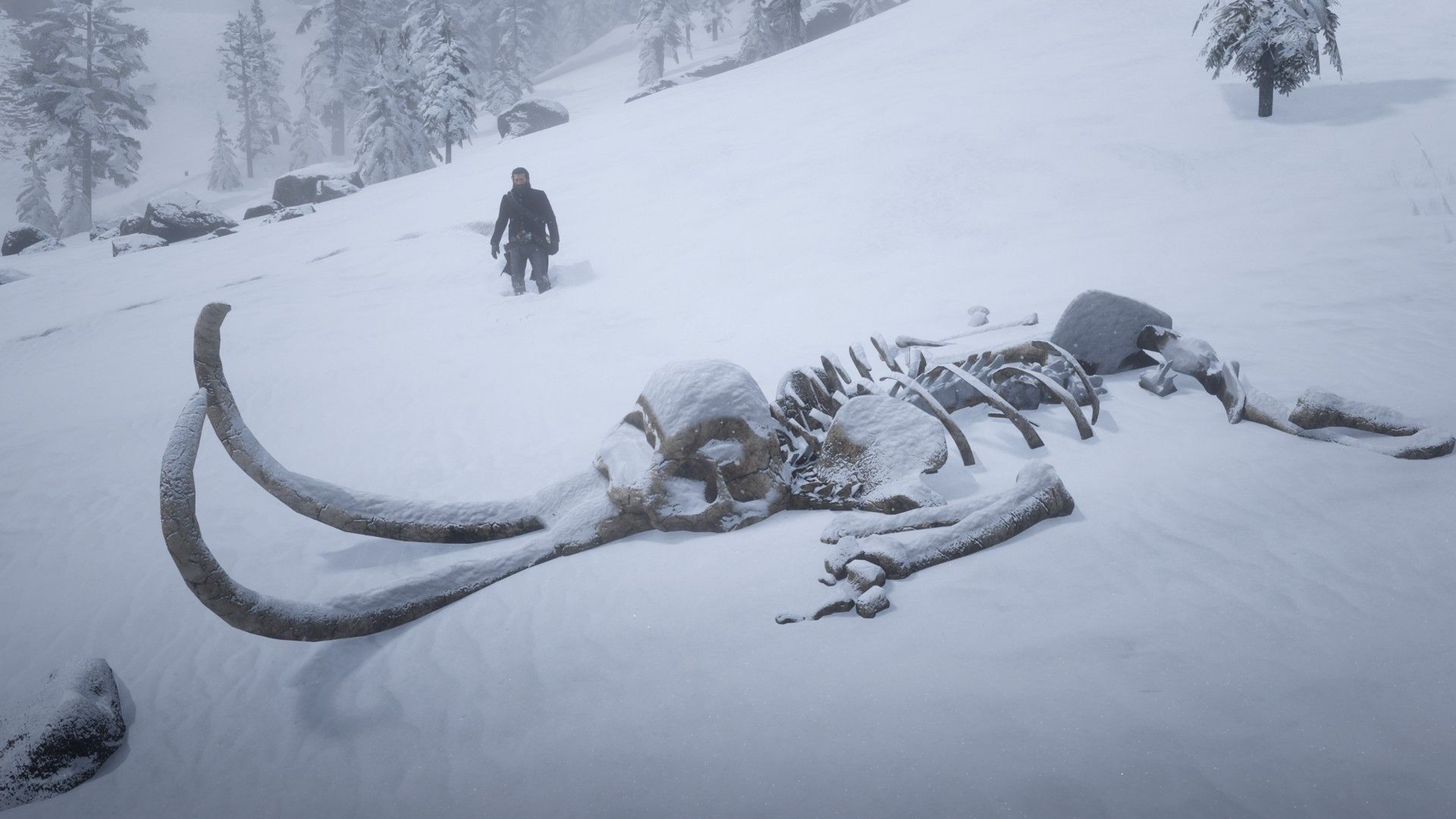 I got nothin’ else to add. It’s just there, deader than a racoon skin hat. 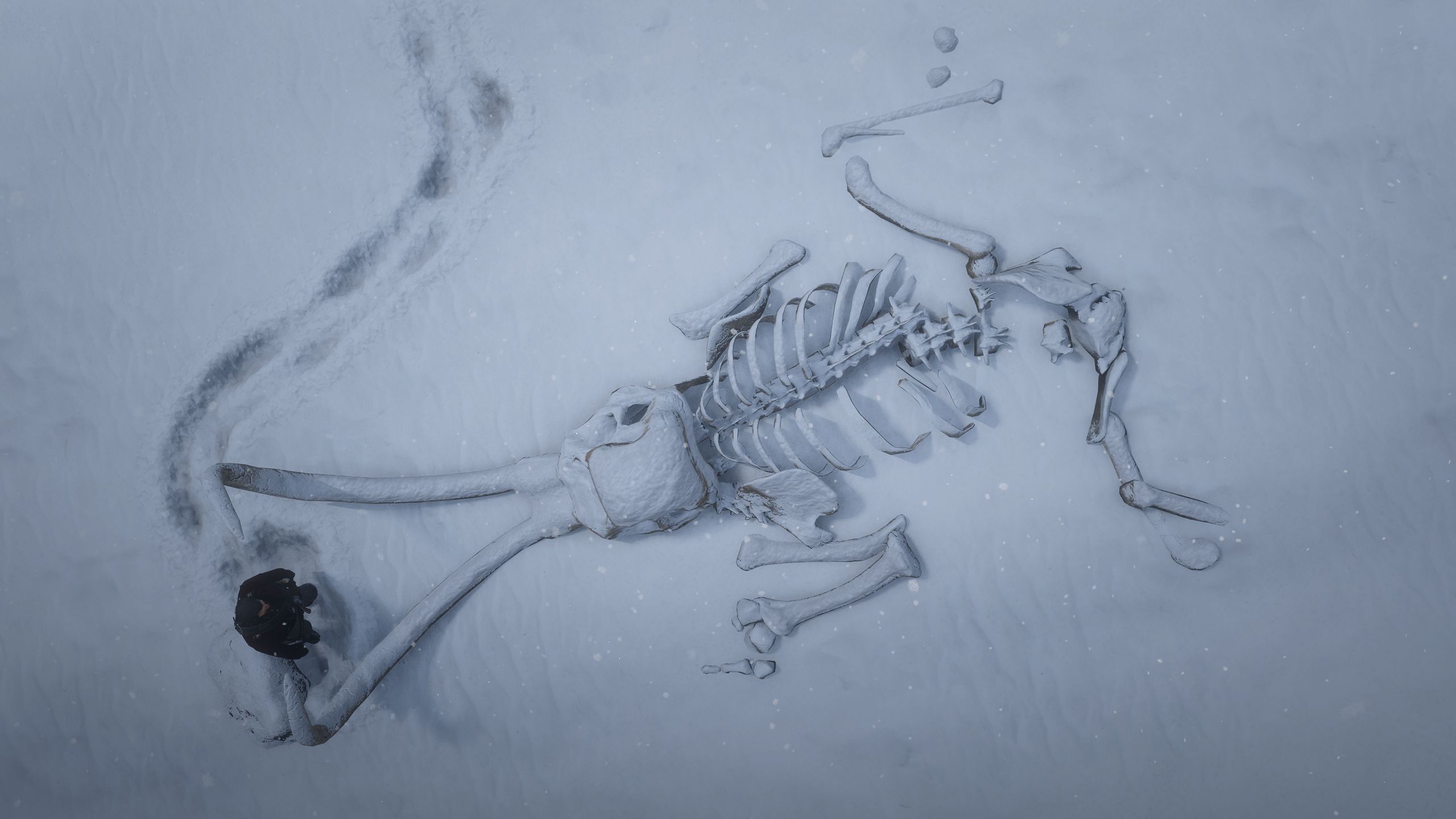 I’ve left this till last because I didn’t want people to be met with Red Dead Redemption 2’s grimmest scene without warning. This isn’t the serial killer who leaves body parts strewn across the landscape like hoofprints. It’s worse. Should you have the fortitude, you can head to the northeast of the map, right where Roanoke Valley meets Brandywine Drop. 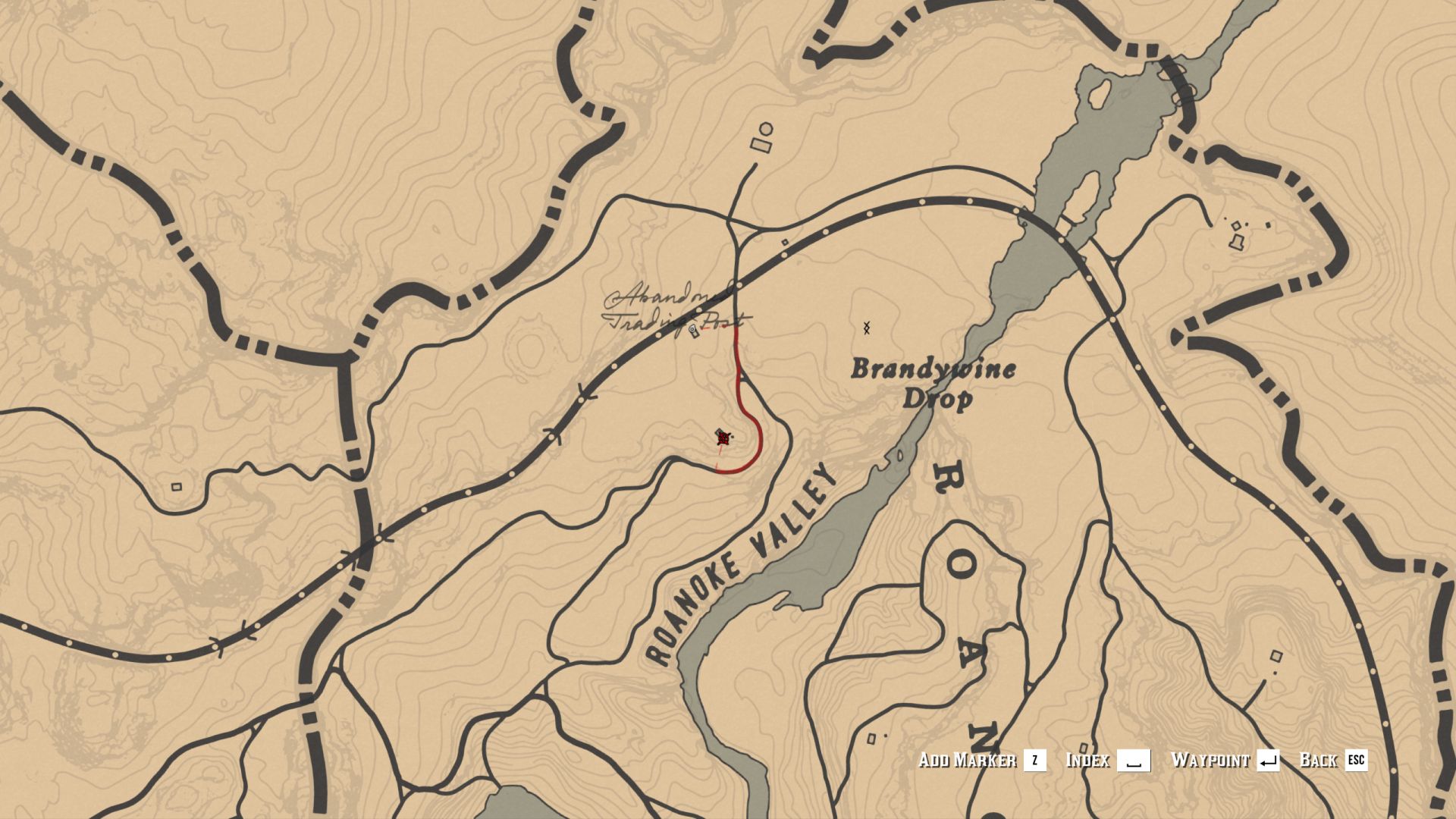 If you head directly west of Brandywine Drop, there’s a small cabin on a ridge, with a smoking hole in the roof. What’s inside the is the aftermath of a meteor strike. The small rock caused a whole mess of carnage, mashing up a small group of people that were sitting down for dinner. 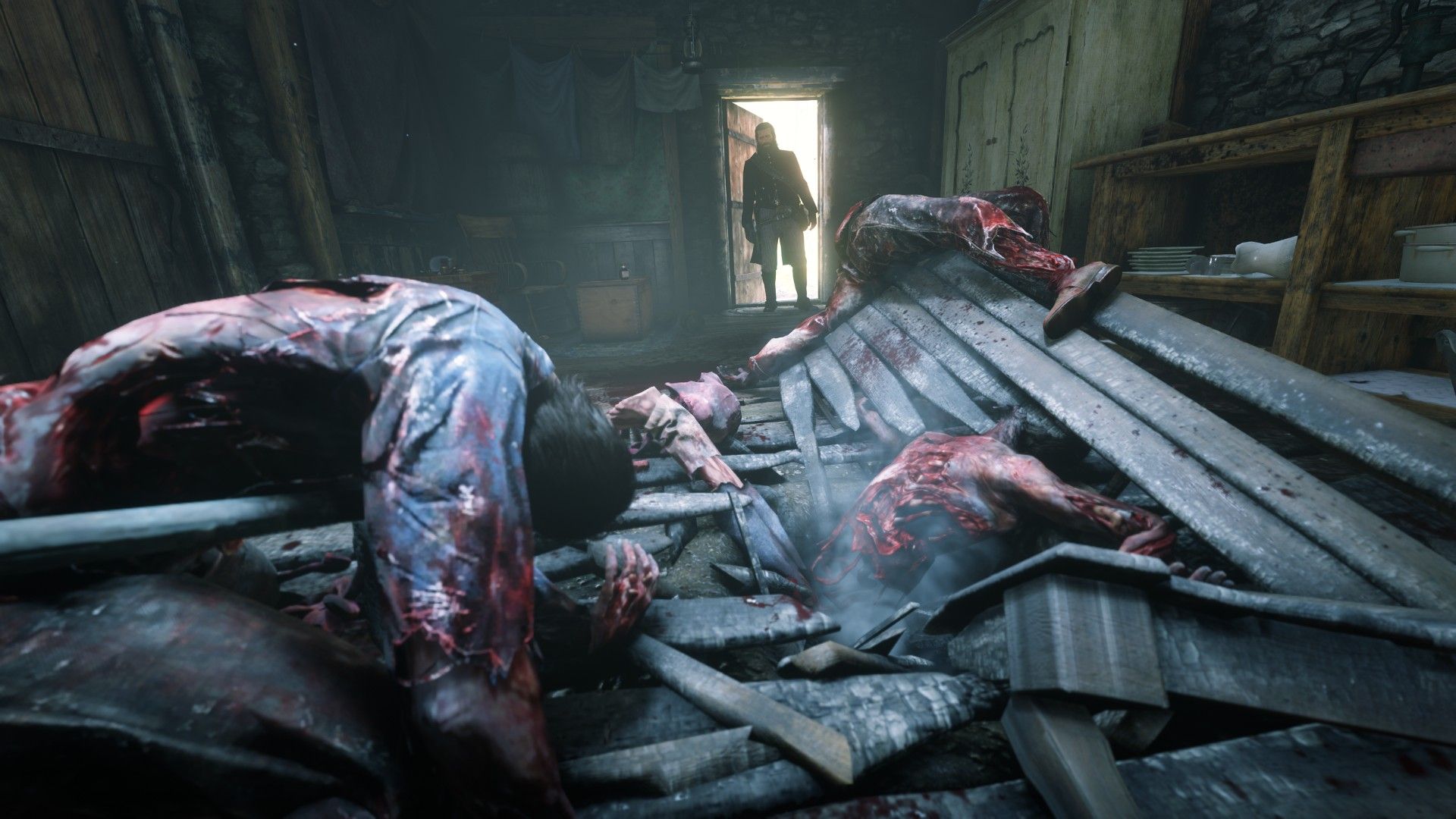 It’s the one moment where I wished the game wasn’t so bloody perfect looking because it’s a genuinely awful scene. But I stayed awhile, because I'd rather pick through the remains of the wrath of God than hear one more word from Dutch. 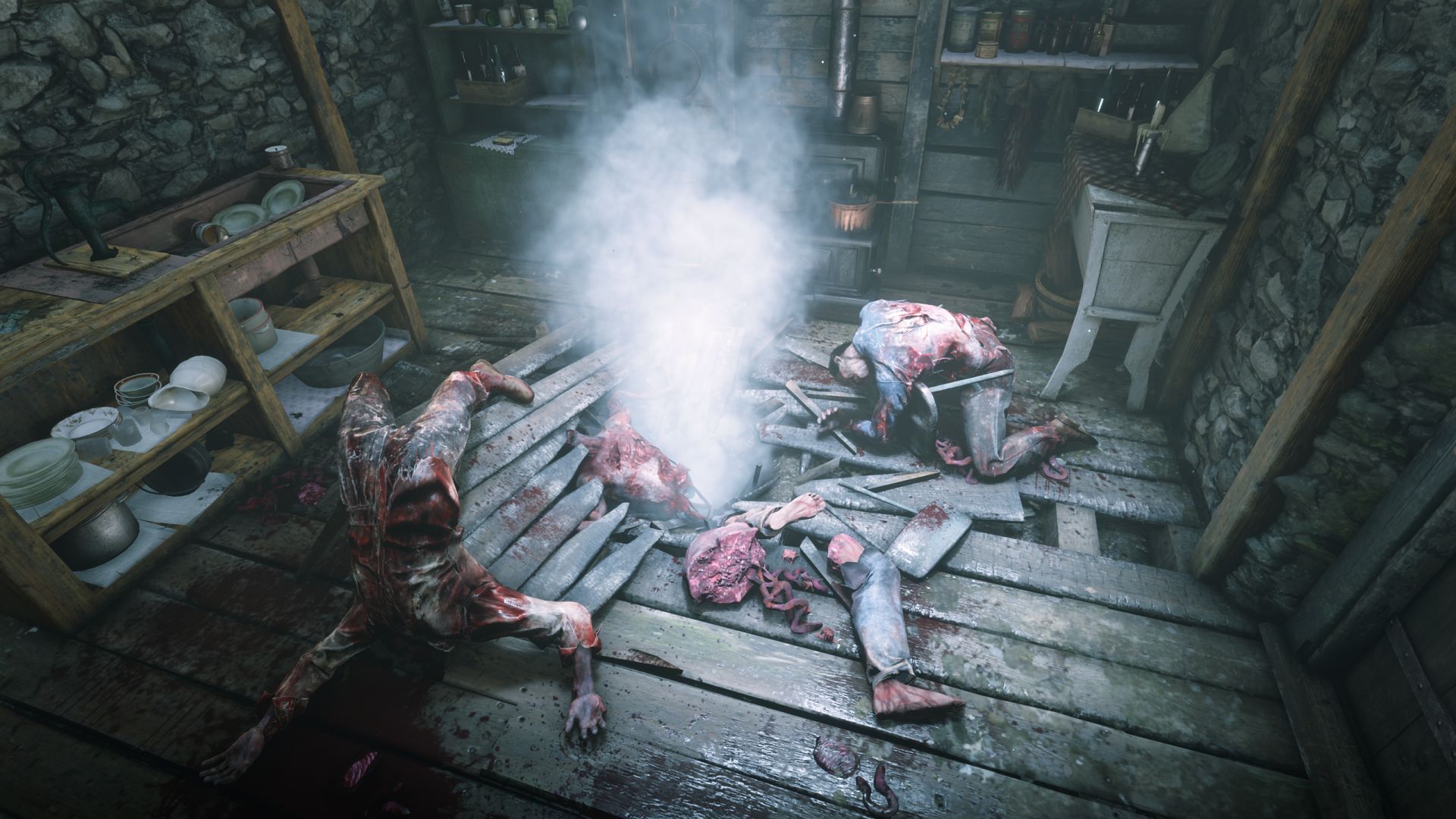 This ain't all, but it's all I had time for. Get yourself a trusty mule and head out for adventure, you won't be disappointed.