If you click on a link and make a purchase we may receive a small commission. Read our editorial policy.
Developer: Capcom
Publisher: CapcomRelease: January 25th, 2019
On: Windows
From: Steam
Price: £45, $60, €60

Certain moments in Resident Evil 2 are imbued with a specific kind of awful. Moments when calculated slaughter gets drowned under a tide of undead flesh, all thought of eradication consumed by escape. There's this deep, prolonged pull of fear, punctured by sharp desperation. Moments when a dozen zombies and worse lumber between you and presumed safety, grabbing and biting and clawing as they drag you to the floor over and over again. It's messy. It's grim. It's kind of brilliant.

It does strange things to your head, reviewing a remake of a survival horror game you know to be beloved. My first impulse was rejection.

I know what you lot are like, you see. You lot, with your blood-tinted spectacles and habit of holding up outdated classics as modern masterpieces. "Doom is still the best shooter of all time", you'll say, forgetting that the aiming is weird and it doesn't have any grappling hooks. My first couple of hours with Resident Evil 2 reminded me of that, even though it's in proper third-person now and you no longer control a human tank from nightmarish corner angles.

Horror games need to horrify, and those first hours did not. Nothing quells fear like familiarity, and nothing is more familiar than a zombie. I know exactly what those chaps get up to. Ripping people in half, moaning, reanimating, lumbering - check check check check. My eyes glazed over as b-movie action was interspersed with b-movie cutscenes, my schlock tolerance not cut out for a hammy mix of over and under-acting.

I ran down gloomy hallways, I got lost, I felt little but frustration. Raccoon City's police station was like a Gothic painting by numbers, only some of the numbers were stupid puzzles. 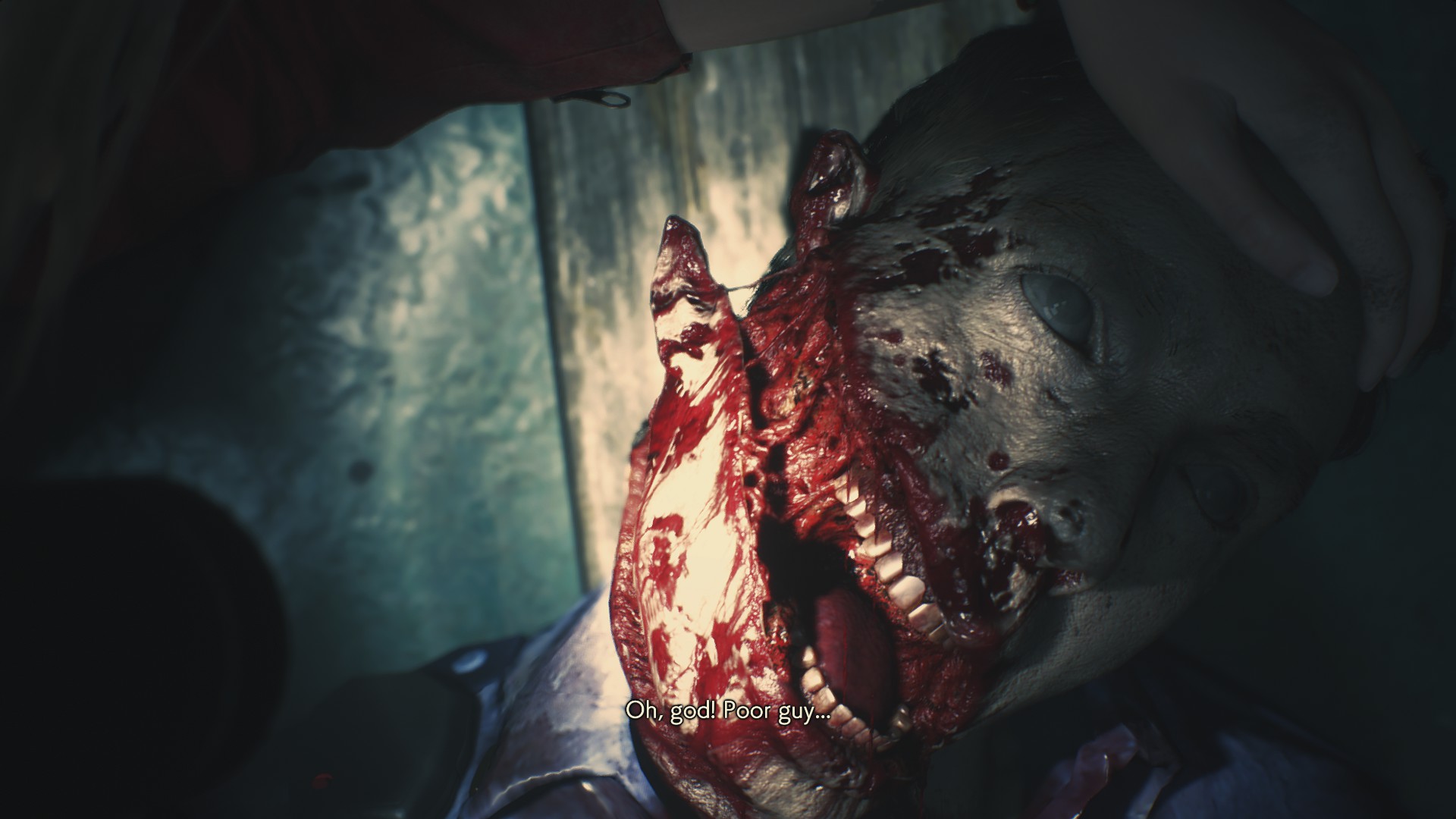 There was one near the start that particularly jarred, with its naked insistence that I tap in a correct button sequence by trial and error. They're puzzles of the sort that provide little satisfaction for those that solve them quickly, and far too much anguish for those that don't. Another source of anguish was the limited inventory, which I refuse to regard as a worthwhile constraint. Lack of inventory space doesn’t generate interesting decisions. It generates tedious jogs back to the last magic box.

I thought I was trapped in a game that was itself ensnared by the past. Then I met a licker.

Nothing should be allowed to scuttle like a licker. Even if they were to just stick to the floor, which of course lickers do not. They're on the walls. They're on the ceiling. They're on your chest, gouging out chunks of precious torso. I hate them. They've got brains where they shouldn't, claws longer than your leg, tongues that... well, let's just not talk about the tongues. 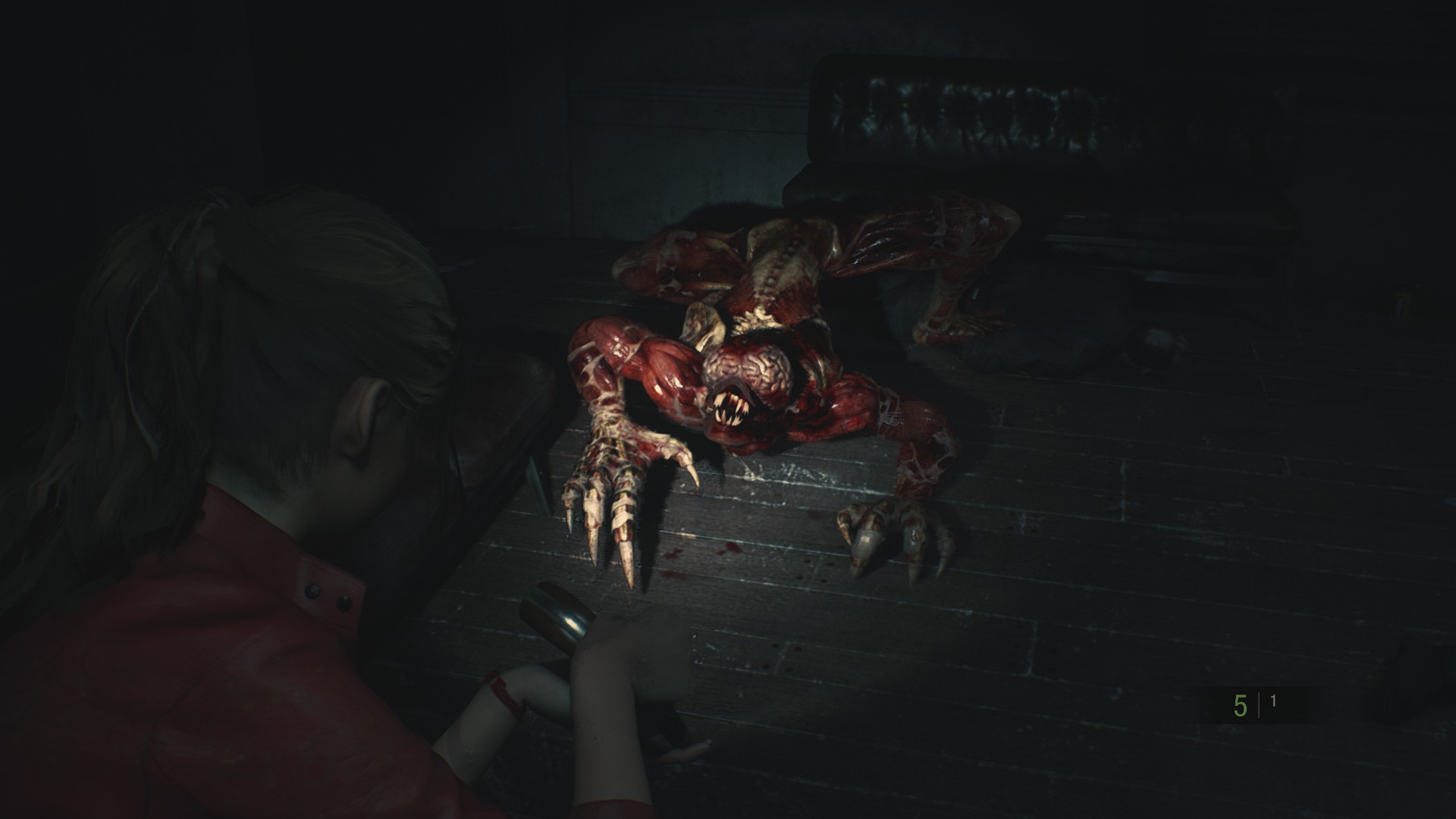 The point is, I thought Resident Evil's capacity to scare had been lost in a cloud of contrivances, perhaps blown in by the winds of time, perhaps there from the beginning. That licker was the first fella to prove me wrong. It wasn't the last.

Where lickers taught me panic, the tyrant taught me dread. A slab of bulletproof marble, marching towards you with all the inevitability of death. You can run, you can hide, but you can never escape entirely. You'll still hear the pitter patter of oversized feet, clunking forwards to a beat that makes you want to puke at every dead end. You'll reach that central area, the one you'd assumed was an oasis of safety where nothing could follow. You'll be wrong.

As the Evil grew Eviler, I grew paradoxically more comfortable. Not with the horrors inside the world, but with the task of navigating it: I stopped my thoughtless wandering, and shifted to targeted exploration. I made a proper study of the map, putting more work than I'm used to into learning my way around. I still struggled - and that's with the help of a map that changes colour when you've found every item in an area. A modern convenience, indispensable for a generation accustomed to arrow-following. 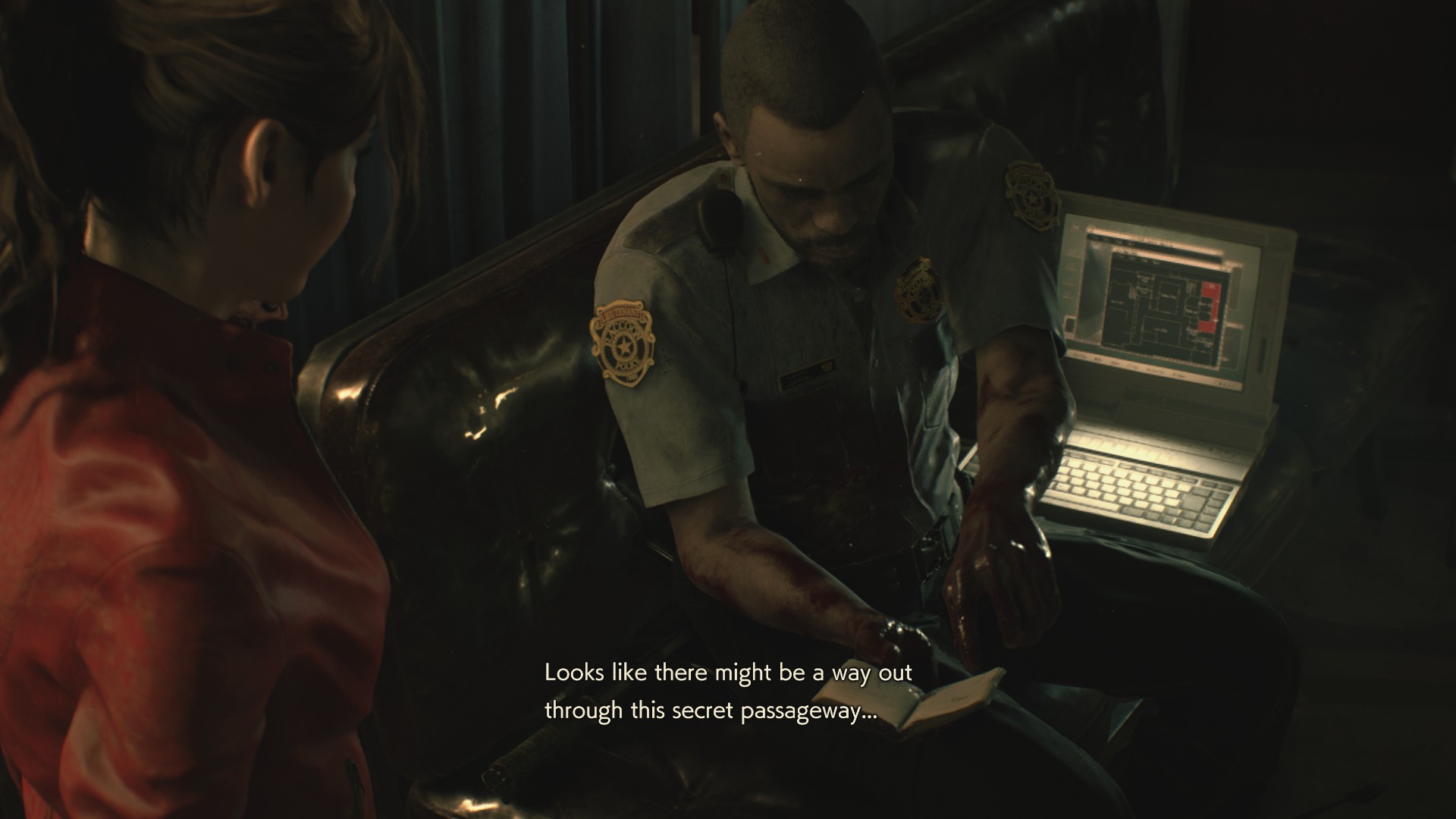 I still got stuck, and I'm still not convinced that was always my fault. I spent 40 minutes trekking around one section, not realising the key to progress was literally on my person. Or it would have been, if I hadn't stuffed a crucial object into storage because of that needlessly small inventory. You heard me. NEEDLESS.

Which brings us back to the story. It's poorly written, poorly acted schlock without a milligram of believability - though I'm conflicted about whether to hold that against it. I've come to see it as goofy set-dressing that often undercuts the menace, while - sometimes - contributing to the fun. It's hard not to laugh at a parent who seems comically uninterested in the safety of her child, or a cop who's worried about not having the authority to work with an FBI agent in the midst of a zombie apocalypse. 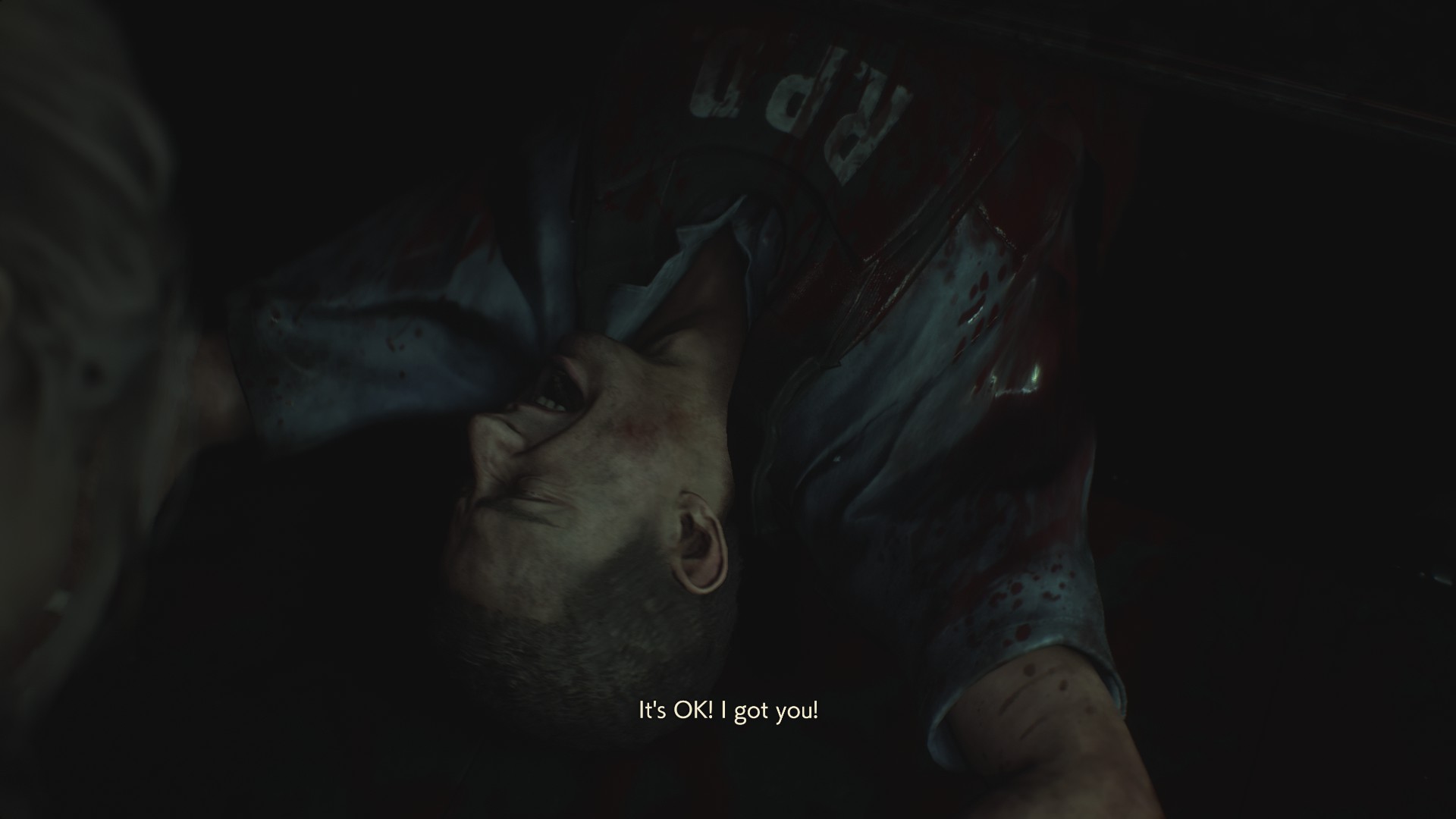 That cop's called Leon, and he's the player character for one of two campaigns. They're disappointingly similar, taking you on near-identical tours of sewers, police stations and laboratories. Apart from the cutscenes, the main difference between them is a section where you play as one of the people you meet. I found the special section in Claire's campaign, she being the other protagonist and (one of) Leon's lazily insinuated love interests, far more effective. Playing as a child in a horror game might be a cheap trick, but it works.

I do wish they'd stop screaming “you bastard” at the poor zombies. Especially you, Leon. Even though you do have the more satisfying weapon selection, with one gun in particular that pops heads oh-so pleasingly. Regular enemies go down in three or five headshots to a regular pistol, which is a neat way of wresting away control. It makes it hard to calculate the time or bullets needed to deal with an approaching mob, leading to the kind of panic I described earlier. Unless you break out Leon's lovely lighthawk. Then you get to enjoy an animation where you kill a zombie just as it lunges, shrugging off its freshly headless-corpse. 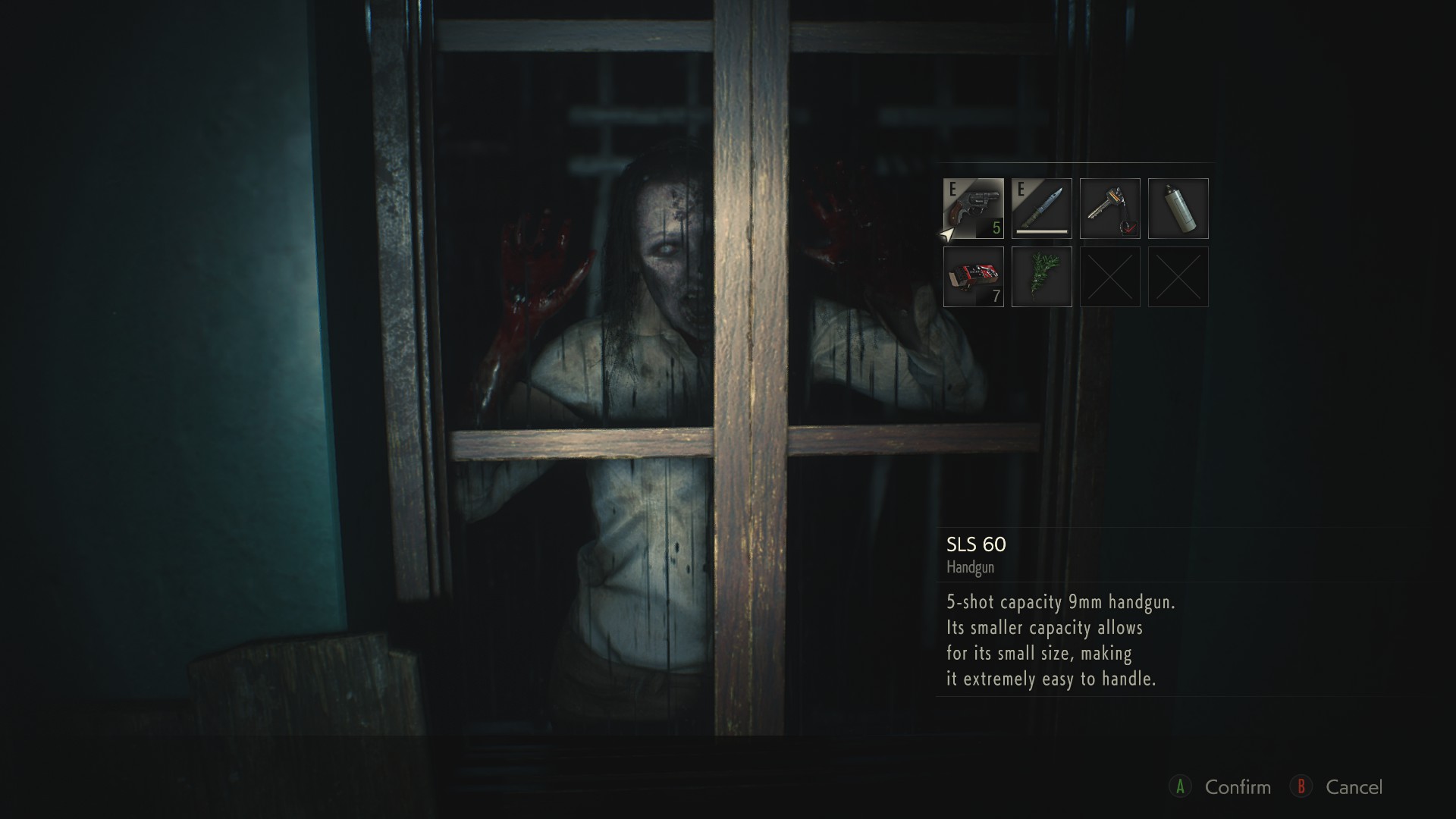 That's where Resident Evil succeeds. Not in the drivel spouted from its character's mouths, but in the bullets spewed from their guns. Or better yet - the clicking of empty chambers, or the spine-chilling scratches of scrabbling overhead. I may hate lickers, but I'm also a little bit in love.