Robert Yang has whipped out his digital loofah to scrub, exfoliate, and polish Rinse And Repeat, his 2015 game about scrubbing the hunky stud you're crushing on in the gym showers. Rinse And Repeat HD is updated with new graphical fanciness and gamepad support (though moving a mouse still seems a more fitting motion for a sponging). And yep, it's still fascinating, still about returning to the digital shower following a real-time daily schedule of gym classes with names like 'Pain Yoga' and 'Combat Pilates', still as thought-provoking as it is funny.

There you are, a schlubby dude, hanging around the gym showers hoping to bump into your studly crush. And he comes, and he asks us to scrub his back or work his pecs, telling us to scrub harder or be more careful, then rating our ability and... leaving. He won't be back until the next day. The next actual day.

Rinse & Repeat runs across several days of real-world time, see, showing only empty showers if you turn up outside the gym's class schedule. 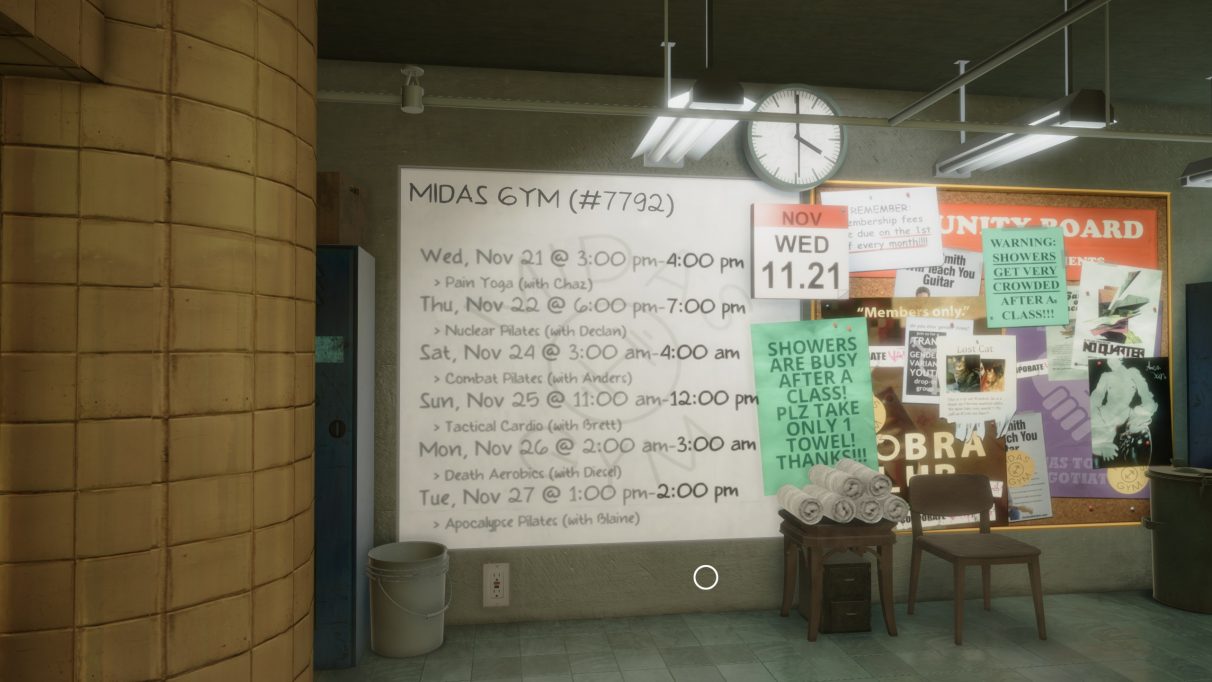 "This game is about caring for someone, but on their own terms: the game will only let you care for it at certain times, and it's up to you to make time for it," Yang explained in his 2015 artist's statement. "Like, I wanted players to literally make time for this game."

It's silly, yes, and funny, but also intimate, thrilling, and, eventually, grim. Our schlubby dude's relationship with this hunky paragon of white gay male culture's ideals doesn't lead quite where he wants. Yang talked about that more in his statement too.

I do like the effort Yang puts into aping the graphical excesses of blockbusters in his wee gay games, standing in stark contrast to the sorts that usually wang on about "physically-based shaders" or high-tech water. But why should that flair be a hallmark of murdergames? And isn't that sort of detail more fitting in games focused on intimacy and small scenes? The look dovetails nicely with the aesthetic obsession running through Rinse and Repeat too.

R&R a follow-up of sorts to Hurt Me Plenty, his 2014 game about spanking then caring for a partner, which also had a real-time element in locking us out if we violated consent were too rough. He remastered that too, along with two of his other surreal and sexy gay games, in his collection, Radiator 2.

If you're curious about technical and stylistic details of the remastering, check out these two posts.

Rinse & Repeat HD is pay-what-you-want, with no minimum, on Itch.io.

Disclosure: Robert Yang has written for RPS before. Check out his ace Level With Me series, where he interviewed developers while collaborating on projects, a Portal 2 map in the first run then a small game in the second.