Just when the Epic Games Launcher seemed like it might have been the final salvo in the launcher wars, along come Rockstar Games with a launcher of their own. The imaginatively-named Rockstar Games Launcher lets you launch Rockstar Games games, and also buy them. Okay? And? Why would I want that? Well, Rockstar are hoping to tempt people to install it by initially offering 2004's Grand Theft Auto: San Andreas as a freebie.

The Rockstar Games Launcher sells and launches a whopping six games plus GTA Online cash cards. A one-stop-shop, it is not. It also boasts groundbreaking features like cloud saves and automatic updates for downloaded games. It can also scan your PC for some (but not all) other Rockstar Games games so you can launch them through Rockstar's client rather than their native way, in case you want that?

I scoff, but I suppose it is a better client for the handful of weirdos who have bought PC games directly from Rockstar through ye olde Rockstar Social Club.

Grand Theft Auto V is the only Rockstar Games game I have installed, and now I can fire up Rockstar's Launcher and press a button to make it launch Steam to launch GTA V. Real handy. And trying to launch my Steam copy of V directly from Steam now launches Rockstar's Launcher first. Great. Thanks, Rockstar. I was worried my game was insufficiently launching. It can be hard to tell, what with it already taking ages. I am comforted by the doublelaunching.

"For a limited time," people who install the Rockstar Games Launcher will get GTA: San Andreas for free. It's still a fair contender for 'best GTA'. I'm not sure which version this is, though to my eye it looks to have the squashed aspect ratio of the the 2014 update which also removed some radio songs. But it's free so hey.

Take-Two Interactive, Rockstar's parent company, said earlier this year that they themselves weren't planning to open their own store. "If [Take-Two] turn around and make Red Dead Redemption 2 or GTA 6 exclusive to the 2Kash & Karry, I'll be sorely disappointed," I said back in February. I suppose Rockstar opening their own store is technically a different thing? HMM. 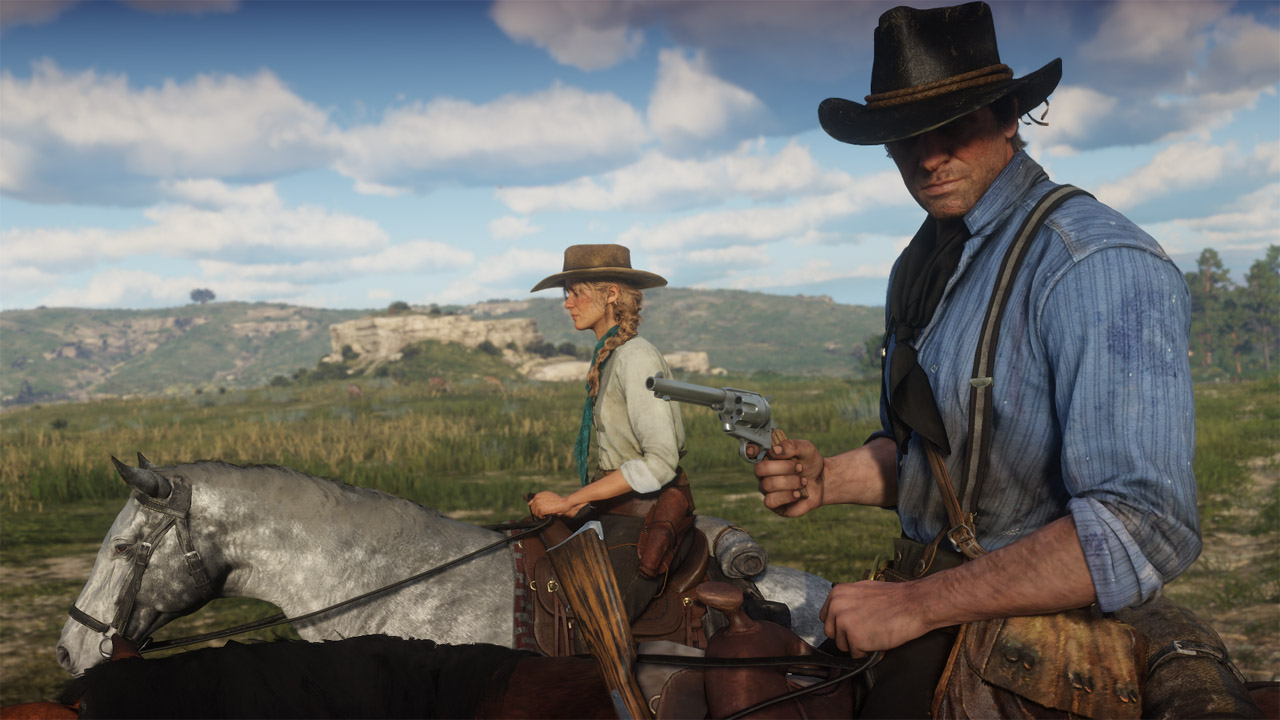 A wild-eyed dreamer might read this as a sign that Red Dead Redemption 2 is coming to PC. Why else would Rockstar launch a near-useless new Launcher four years after their last PC release and with no confirmed new PC games on the horizon?

This bard who descends from the mountaintop with wild hair billowing in the wind might also suspect that Rockstar are considering a move away from Steam but don't want to go to Epic either (unlike fellow Take-Two subsidiary 2K Games, who published Borderlands 3 as an Epic exclusive). Could this be a prelude to a Rockstar-exclusive RDR2? I suppose there aren't many other games that could justify a whole new store by themselves.

Why else would Rockstar do this? Surely not just because they can? Ha ha go on, back up the mountain you auld scamp. Away with you.

Disclosure: Like half the population of Edinburgh, I know some folks who work at Rockstar. People might not know they know Rockstar people, but they do. It took me literally years to find out some people I knew were Rockstar people. They are everywhere.