When Sam Barlow released murder mystery game Her Story in 2015, he probably didn’t expect to get a two-page spread in Le Monde about this three-hour FMV game. Her Story worked because it was simple. You had a fictional desktop and a search engine that would bring up videos of an ongoing police interview. When you typed in “dead” or “argument”, you’d get a video of the main character, Hannah, answering the questions of an unseen detective, with those keywords somewhere in the testimony. A search bar ‘em up.

This year we’re getting a follow-up called Telling Lies. It’s not a sequel, but the same idea: a search bar and a bank of videos. It’s not clear what the big lies of the title are, but we can clear up another mysery right now. Why has it taken Barlow this long to come back to a formula that was so obviously good?

"I hate repeating a trick," he says. "I’m always excited by new ideas, so I didn’t want to do that. But then enough time had passed that I would look back at Her Story, and I’d be like... ‘Oh actually some of the things I was doing in that were really interesting, and I would love to dig into this more.'"

Well, that was an easy mystery to solve. I’m speaking to Barlow at E3, where he is showing the basics of his new game to the press. There are obvious differences between this four-way surveillance mystery and his original “desktop thriller” (as he called Her Story at the time). This time it takes place over the span of two years. This time there are four lead characters, and their secretly recorded conversations, stripped from their webcams and phones. It’s your job, as a mysterious nosey-parker, to sift through these recordings via a desktop littered with the kind of governmental documents that might belong to an agent of an overbearing surveillance state.

But your own character is one of the mysteries too. There will be a sense, I’m told, that this woman (whose reflection is constantly glimmering on the screen) has “one night to get through this database”. I don’t get see much of the actual tale, though. Barlow is perched guardedly by the (real) computer, and seems to be selecting the most innocuous footage he can find, pausing quickly and allowing no eye-catching dialogue to distract me.

“I’m so conscious of not wanting to spoil so much about this,” he says.

Instead, he shows me practical things. You can pause the footage, and scrub forwards and backward by dragging the cursor back and forth, in a way that is so future-cop I almost expect the game to respond to shouts of “computer, enhance!” You can also highlight subtitles, useful for searching suspicious or curious terms straight away. 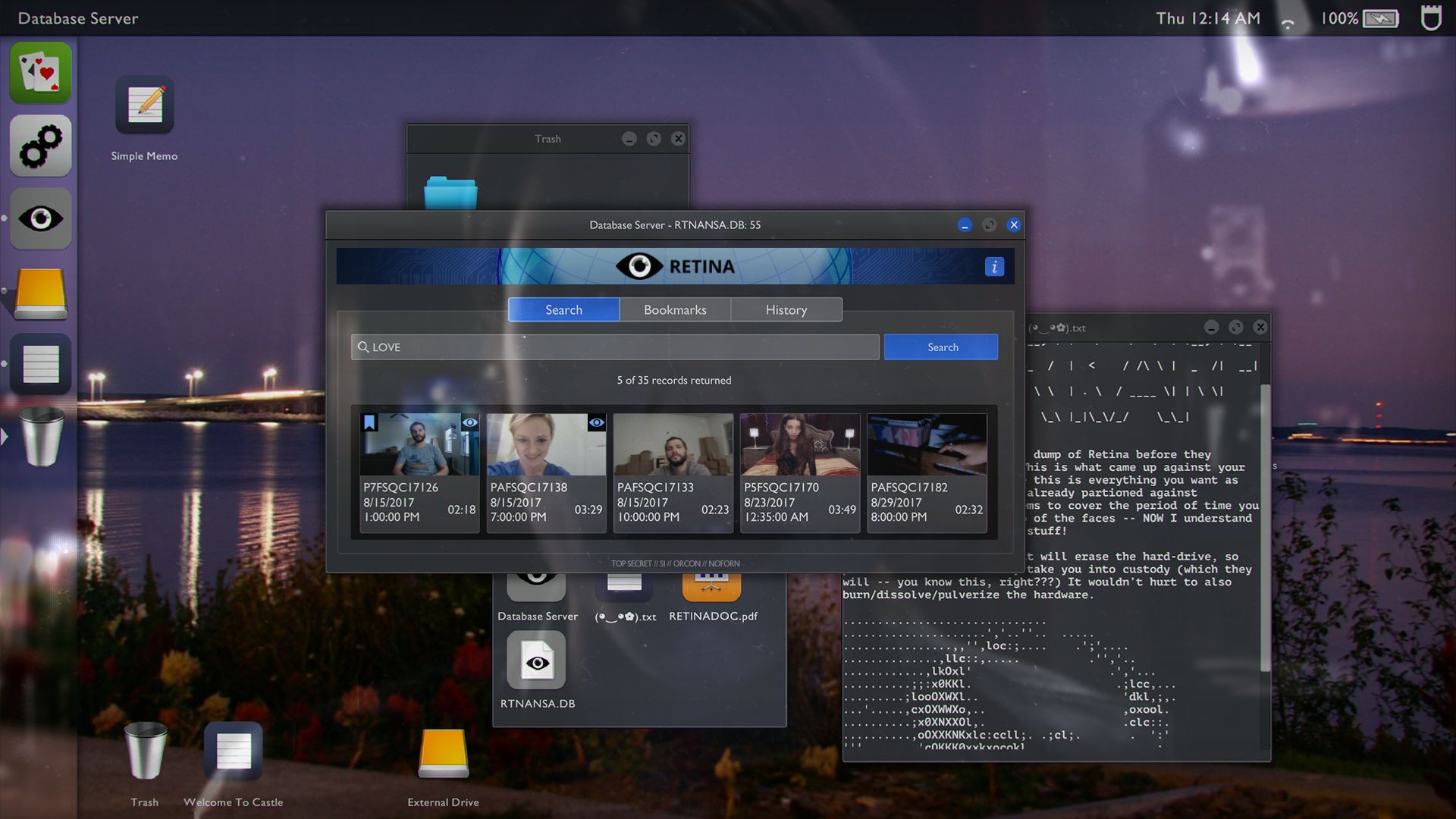 More importantly, you’re only hearing one side of any conversation. At one point a man appears, singing and smiling, and talking about... hiding a tooth? It’s not clear what we should make of it. But a lot of the game will be about matching the conversations between the characters. Barlow selects the word “tooth” and searches for it. And soon another video pops up, this time a child, asking eagerly about the tooth fairy. There are long pauses in which the kid must be listening to the man we’ve just seen, and the words we’ve just heard. His dad, perhaps?

“Generally, it’s the case where you are always going to be able to find the other side of the conversation,” says Barlow, “so there is a little gameplay thing which some people get really into, where they are pinging back and forth between two sides of a conversation, inferring - from questions and answers... or their verbal ticks - what is happening in the conversation.” 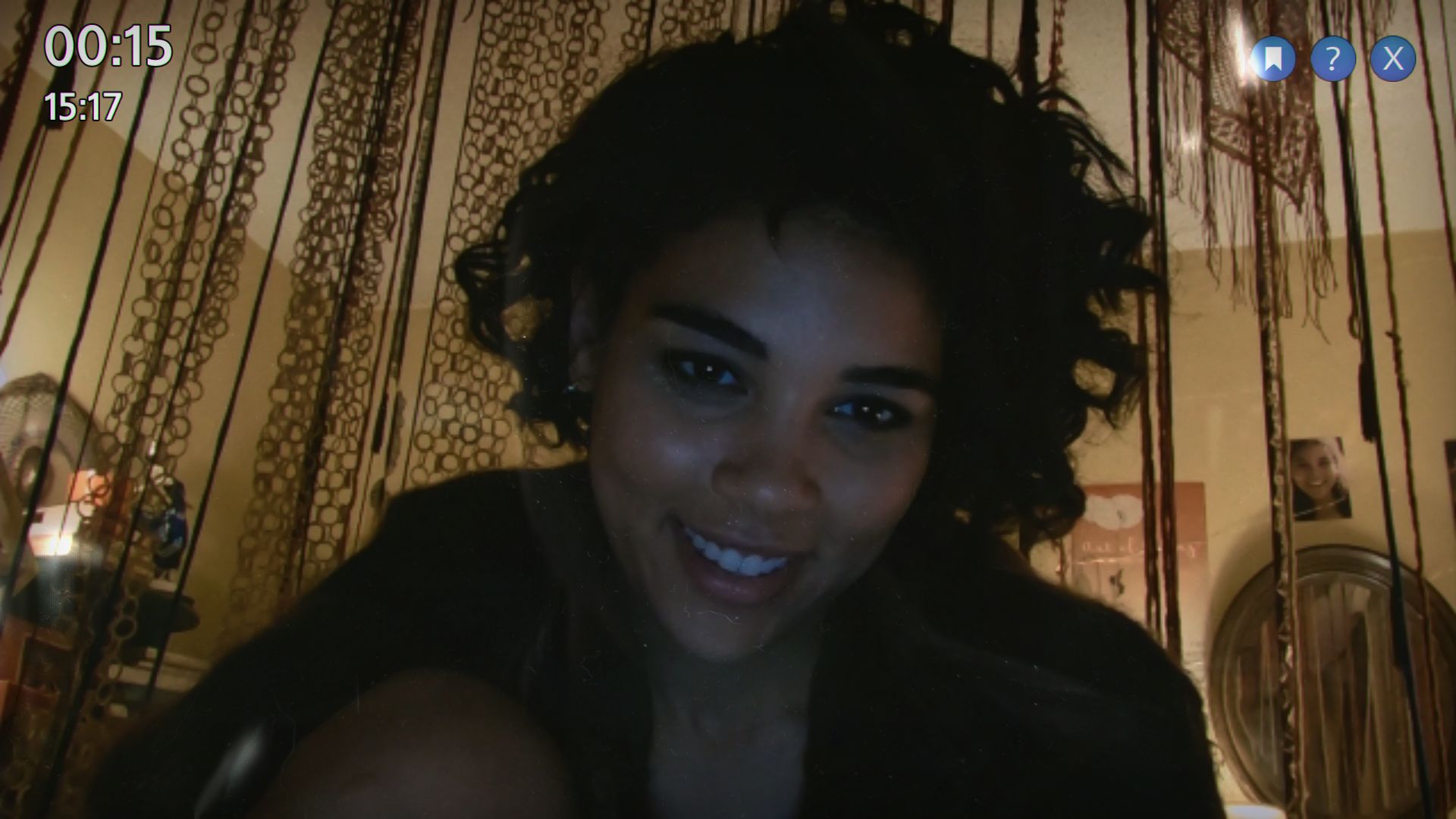 It’s neat. You can also bookmark videos. And there is even a memo app on your desktop for taking notes. Which some may feel is against the spirit of this type of detective game. One of the greatest pleasures of Her Story was excitedly writing down all your spidery thoughts in a notepad, while your housemates looked at you with deep concern. Barlow sees the in-game memo app in more pragmatic terms, considering the game has two years of criss-crossing chatter and somewhere between 30-40 speaking roles.

“With this one, because it’s so much bigger, I was like, I need to give you some support so you don’t feel overwhelmed,” he says. “It’s the equivalent of going: ‘You know what? I’m going to give you fast travel, because otherwise it’s annoying.’”

But the most striking thing about the desktop is that permanent reflection of your own character in the screen. She is constantly shifting and blinking, or glancing down at the keyboard, just out of focus. And there is an uneasiness to this, knowing that she is always sitting there and looking out at you, like a pervy ghost, as you also peep into other people’s lives. Unsurprisingly for a surveillance ‘em up, there is something voyeuristic about all this. But Barlow doesn’t necessarily agree. 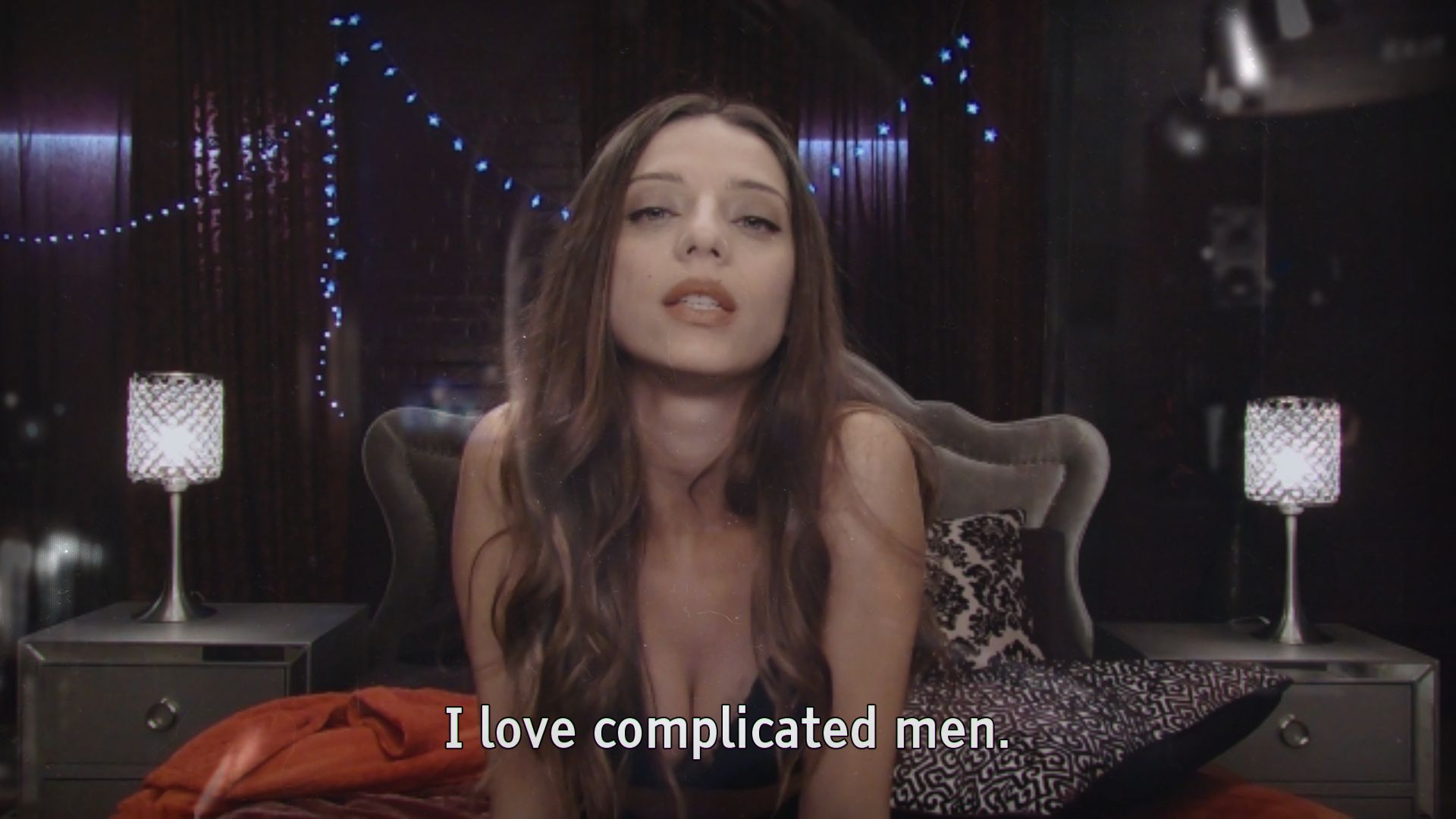 “I don’t think it’s voyeuristic,” he says. “I think it’s intimate and it is personal, but you’re really positioned in such a way that you feel you’re in the middle of these conversations. The more pretentious analogy… is if you read a first-person novel. There’s nothing icky about how close to that character you are. You’re reading their innermost thoughts… you have that real proximity to the character, but it feels earned, they’re letting you into their thoughts.

“[In Telling Lies] it feels like you’re right in amongst their lives, and because your brain is working to figure out what’s happening, to infer context, it kind of takes the edges off.”

He does admit that there is “something naturally humanly interesting about other people”. He gives the example of being in a cafe and over-hearing a couple arguing. Sometimes, you just can’t help it.

“There’s a natural curiosity there, which can at some point push over into unhealthy.”

But in a world in which all our Twitter DMs and furtive wanks are knowingly recorded by our respective governments, it seems short-sighted to care about petty eavesdropping. It’s not clear if privacy and surveillance are going to be major themes of the game, or if your Surveil-o-tron 5000 is just a handy storytelling device. Either way, there was some interesting research for Barlow. While designing the game he looked at screenshots of a real surveillance database for reference (the MI5 Optic Nerve snooping program revealed in the Snowden documents). But the state’s grasp of good UI left something to be desired. 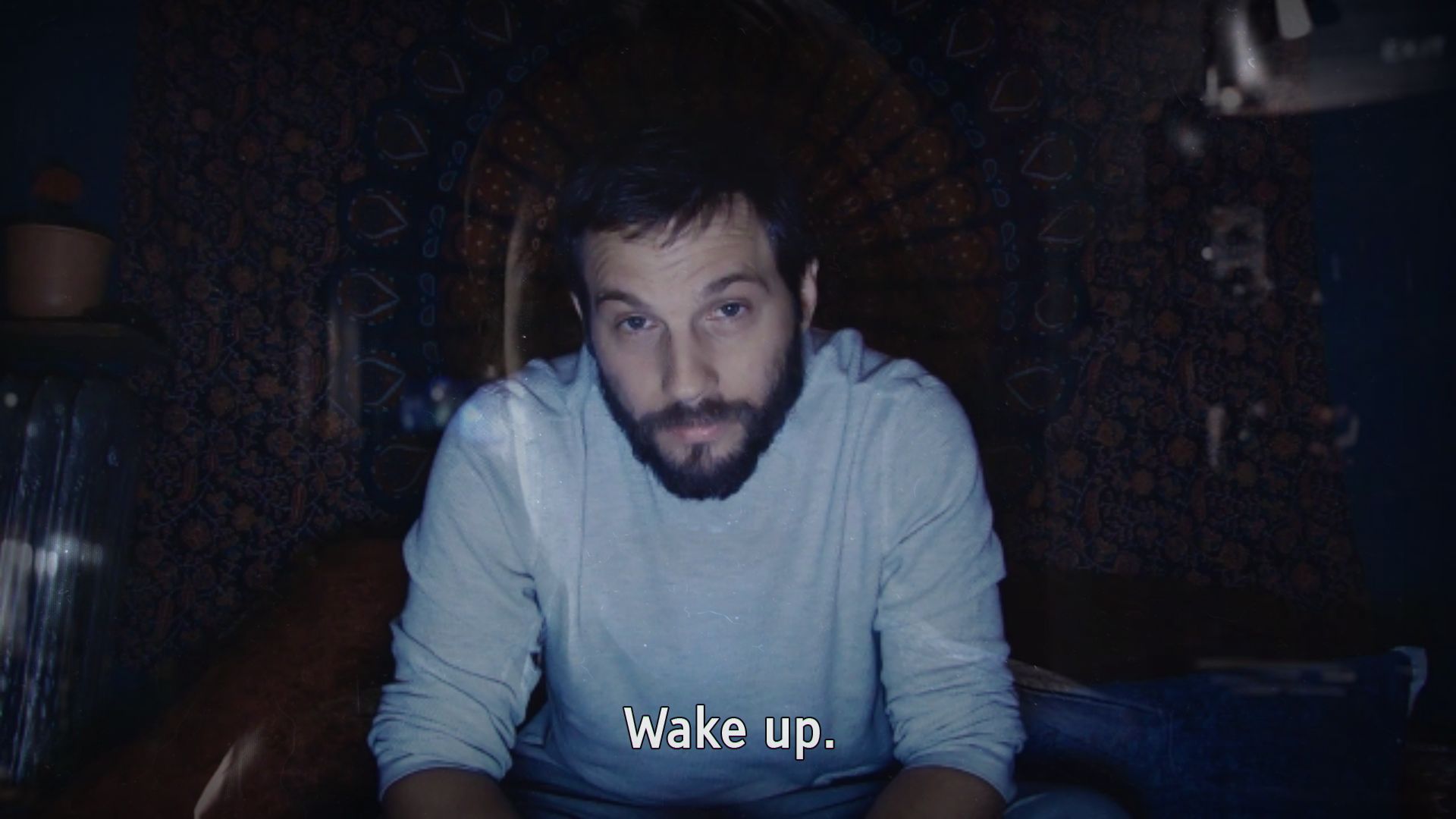 “It is way uglier than this,” he says. “I was like, if I make it that ugly people will just think I’m cheap. I have to make it look a bit sexier and sleek.”

It’s definitely a slicker piece of kit than the chunky interface and VHS scanlines of the 90s police computer in Her Story. Telling Lies feels shiny and modern, and it’s big white search bar has me itching to reach over Barlow and type stuff in. “Liar”. “Lies”. “Fibs”. “Opposite of the truth”. For a player, going back to this formula feels overdue and very welcome. For Barlow, returning to the “desktop thriller” is more complicated. When Her Story was released, he didn’t want to do a follow-up straight away, even though that would have been the obvious choice. It's only now, after the dust has resettled on the VHS tapes, that he's happy to go back to the open-ended FMV game. And it's a good thing, he says, because nobody else will.