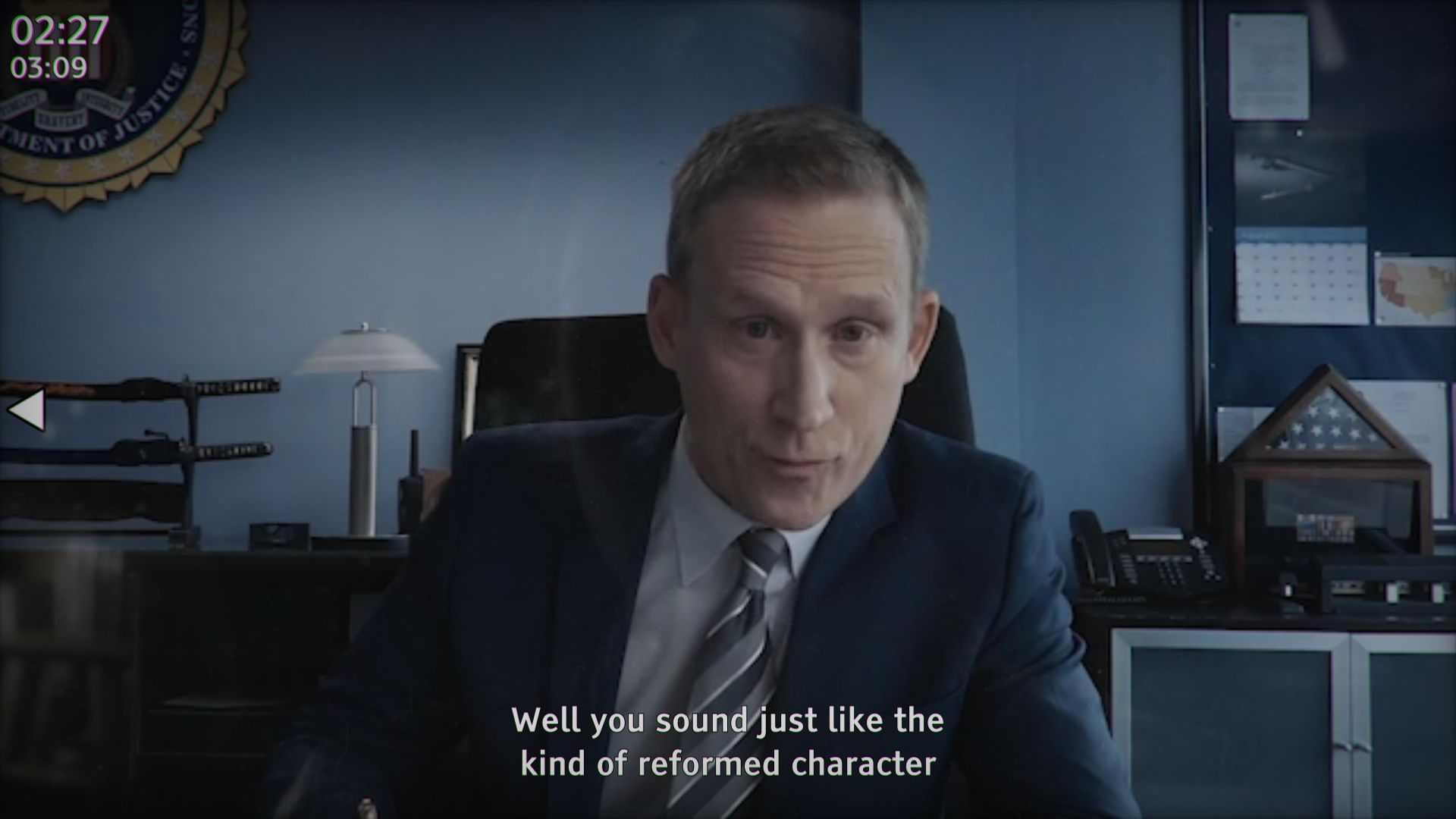 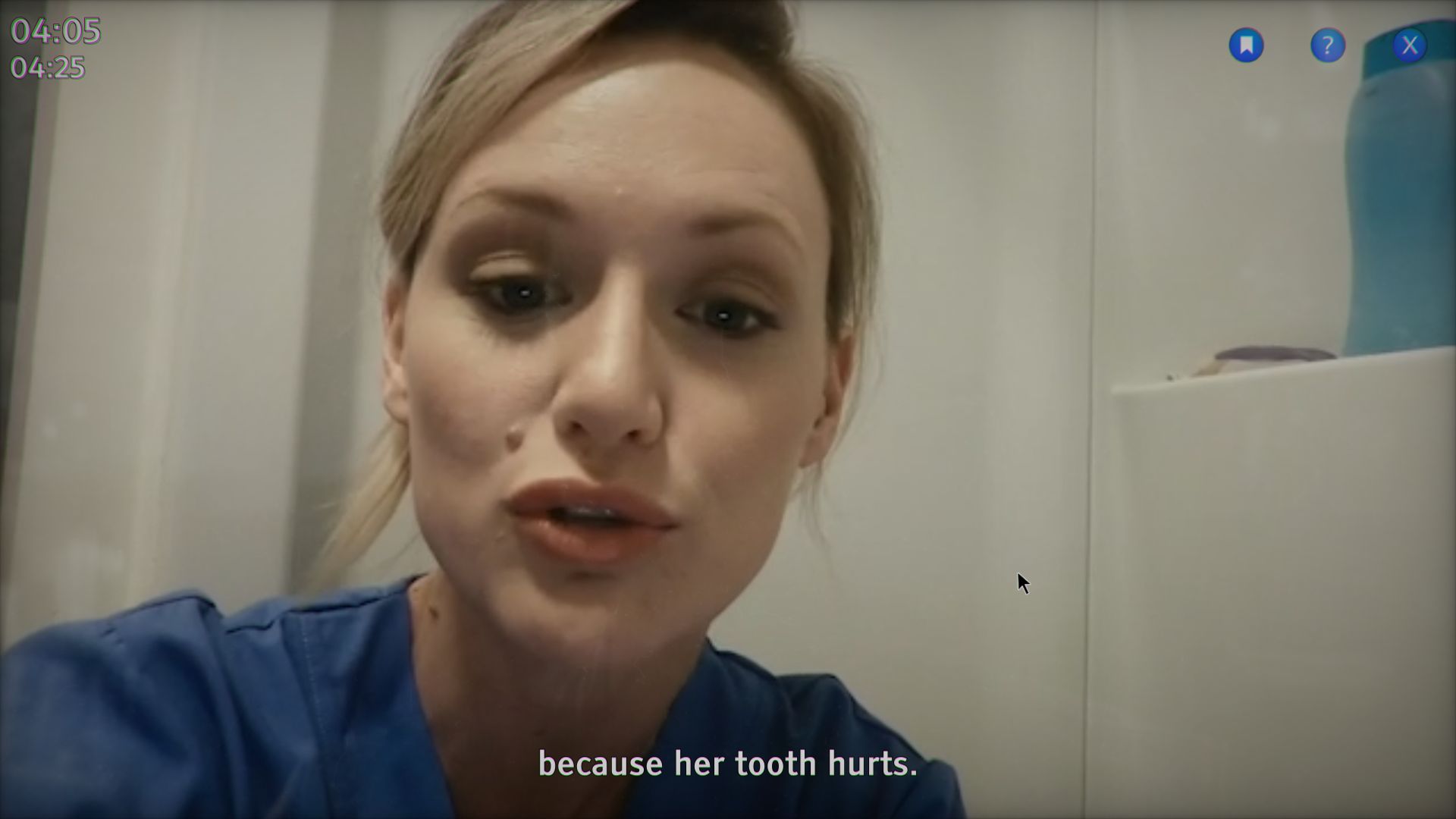 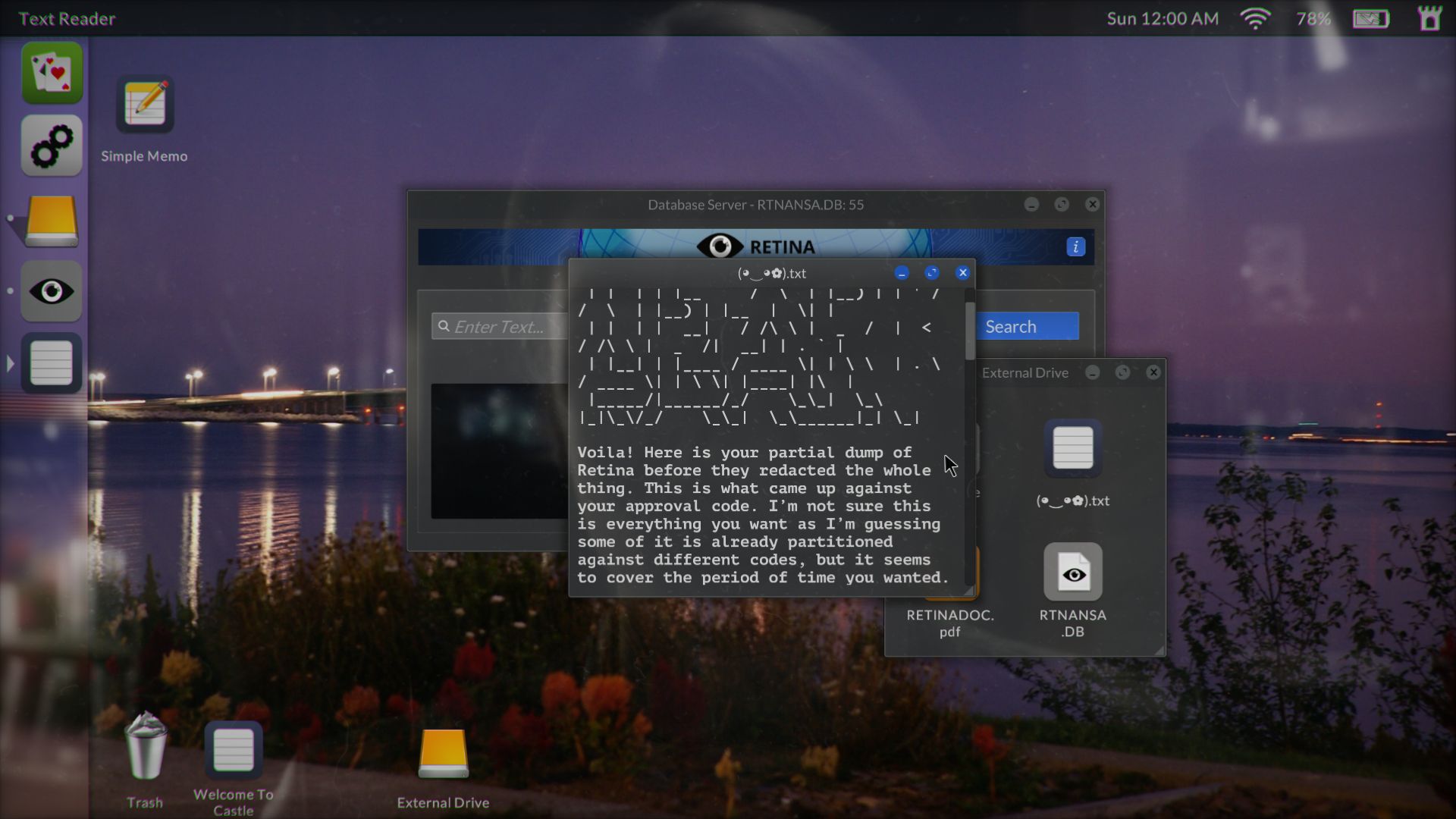 If I was really lazy I would just write "you know Her Story? It's like that but more," and call it a day. But I'm not lazy. I am a diligent and enthusiastic employee of Rock Paper Shotgun, and that sentence would be a bit of an oversimplification of Sam Barlow's new watch videos 'em up Telling Lies.

Not a total oversimplification, however. Telling Lies feels very much like Her Story 2, in the sense that a sequel is like the previous entry in a series but more: bigger, better, faster, stronger. Like its predecessor, it involves watching videos on a simulated computer desktop. But where Her Story had you searching through archive footage of police interviewing one woman multiple times, Telling Lies has you rummaging through a stolen hard drive of NSA surveillance footage, including multiple people and at least four different conversation threads, stretching out over two years.

The controls are very similar: you search for words or phrases in the database, and it'll throw up any videos where someone says that exact thing. This time its easier to scrub through the live action videos, bookmark important ones, and check your search history. You can search for words directly from the subtitles too. The whole thing is much more streamlined than Her Story. 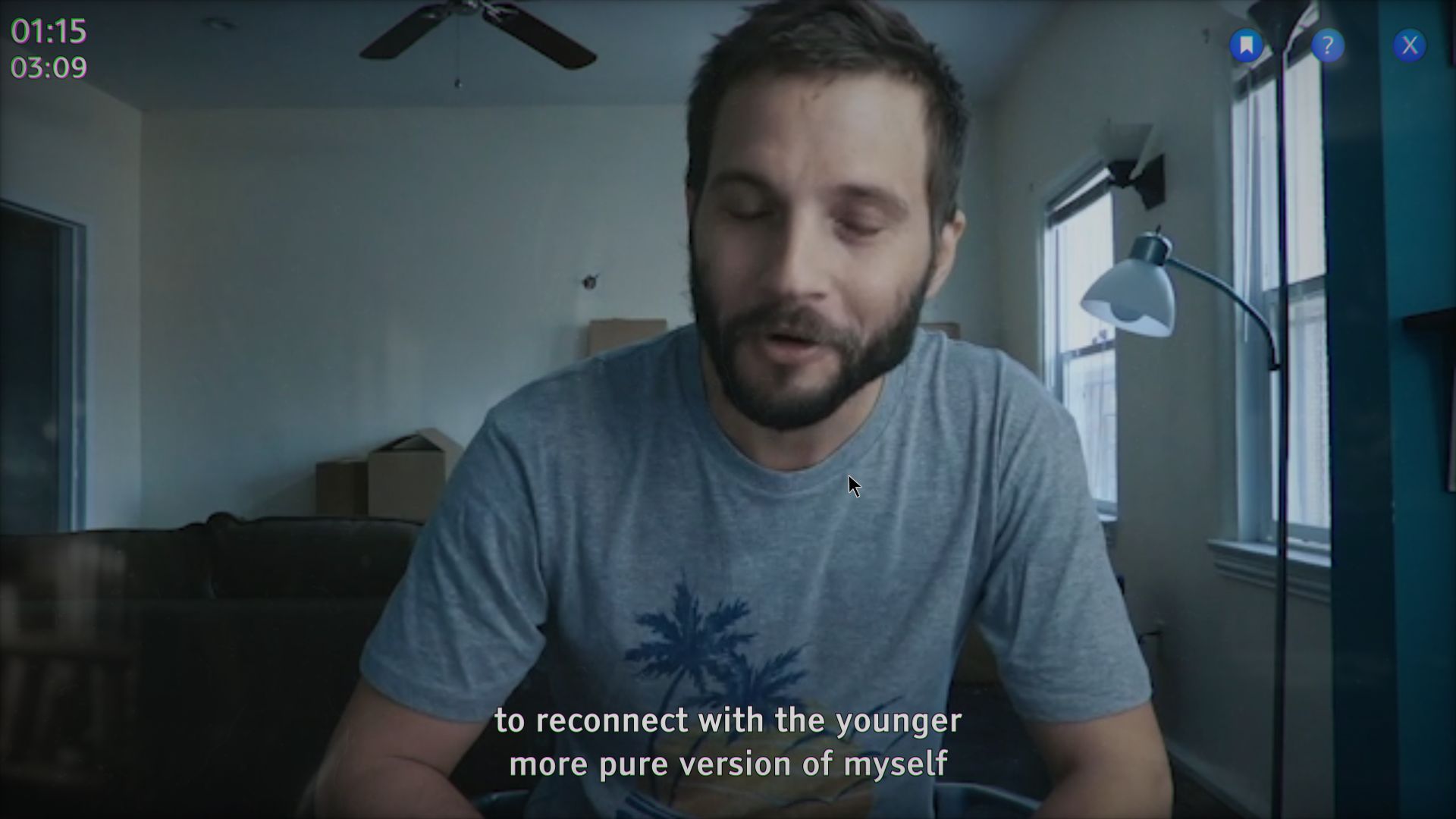 This time there's a notepad built in too, in case you don't want to scribble Pepe Silvia all over real life paper. It's part of what makes your desktop-within-a-desktop feel almost real. You can see the battery charge indicator going up in the screen corner, and even play Solitaire if you want a break from staring at serious faces.

Telling lies is made of half-truths. Even the question of who you are and why you're investigating this archive is a mystery buried in the files. In each of the videos you only see one half of a conversation, so the trick is finding the other -- matching dates and times, searching for a likely question that prompted the answer you saw. It's good fun doing this -- a very rewarding puzzle where you fit two halves of a word-coconut together without any cracks. And there's plenty to look into. The two year timespan of the videos includes espionage, eco-terrorism, pregnancy, teeth falling out, bedtime stories, blackmail… there's a lot going on, basically. It's like condensing a whole arc of Eastenders into a few hours.

As a result, some of the videos are upwards of ten minutes long, with the same sort of density and resistant texture as a chip shop sausage, while others necessarily include long gaps where the other person is speaking. It's both effective in some scenes, and really bloody annoying in others. It also throws up a few issues, with a capital italic, that seem dealt with in an arbitrary fashion because of how the game is structured. 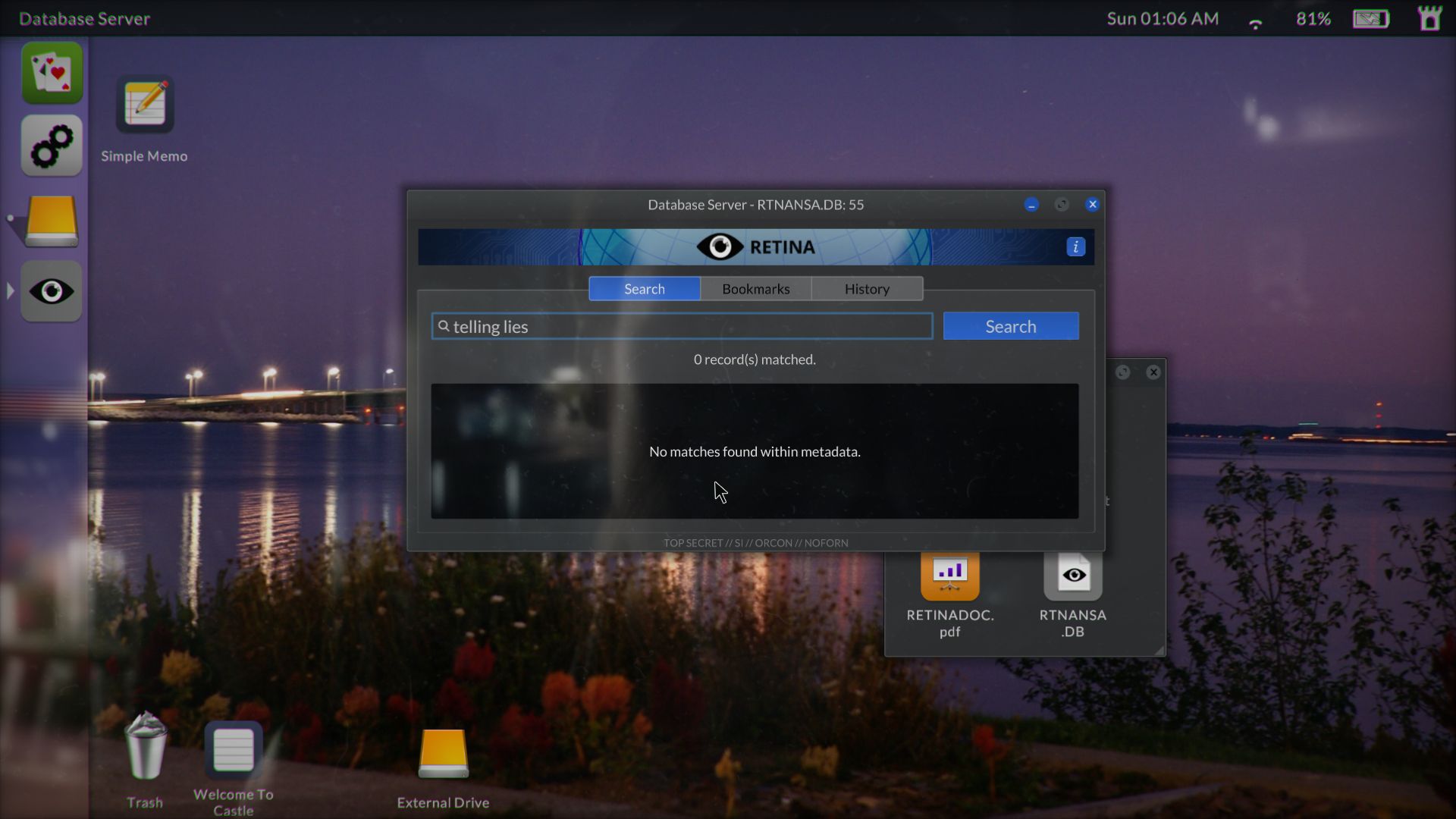 Finding a video featuring a grandmother with dementia, for example, is jarring when you aren't looking for it, especially since the last time you saw her she was happy as a clam. It's hard to say if Telling Lies really handles its issues well, because generally, by the time I'd pieced together the end of a plot involving one, I'd forgotten the start. And ultimately, as with Her Story, if you stumble on a few key scenes early on, you'll be able to figure out almost the whole story. Whether or not you keep going after that depends on how invested you are.

Logan Marshall-Green, who plays the main character (and looks inescapably like an alternate universe Tom Hardy), is actually very good. His character is a man who is many things to many different people, and as you learn more about him you uncover a lot of different layers around what is basically a shithead. After watching all his secret foibles and dodges and, ahaha, telling lies, it's incredibly satisfying to discover the videos where various people tell him that he is, in fact, a shithead.

The rest of the cast are up and down, but three supporting characters (all women with different relationships to the main character, played by Alexandra Shipp, Kerry Bishé and Angela Sarafyan), turn in some stellar performances. You'll get very attached to at least one of them.

The game plays off attachments like this, giving you a kind of report once you've finished playing that tells you which characters you paid the most attention to. In a very smart move, you actually have a time limit of about five hours, after which you'll get nudged into finishing up the game. It means you don't get stuck in an infinite loop of searching the archive, and gives you a reason to play again. I managed to watch about half of all the videos in one run, and ended up getting invested in the canny sex worker who kept her cam girl channel fresh by continually changing her persona (and her name, which made tracking down her videos all the more challenging). 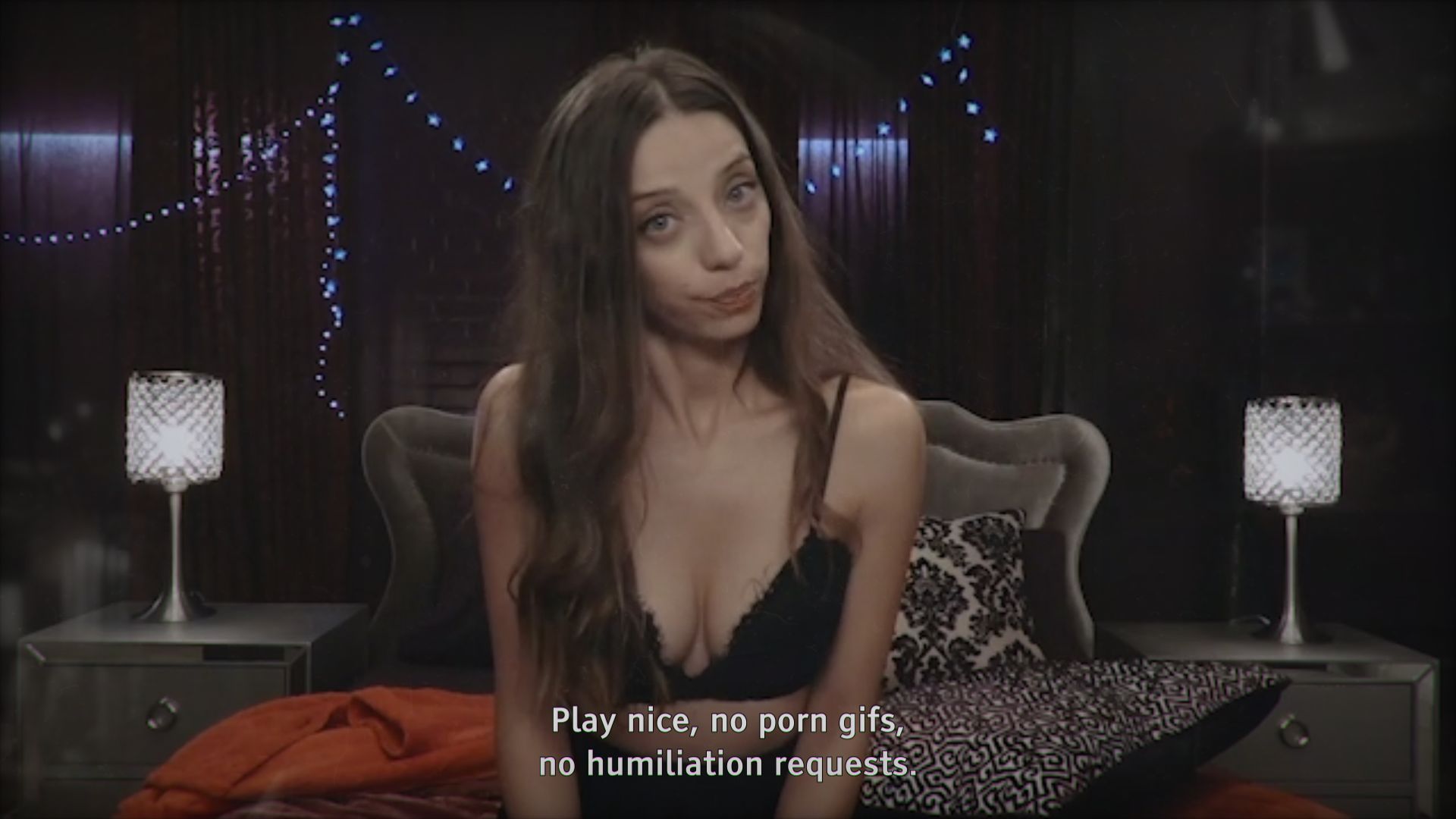 Barlow told Brendy he doesn't think the game is voyeuristic, and is instead intimate and personal, but I don't buy that. It doesn't feel literally voyeuristic, because the plot ends up being so John le Carré by way of Tom Clancy that you never get tricked into thinking you're watching real lives unfold (aside from the one video I found that was just several minutes of a sleeping child's face, which I found a bit creepy, tbh). But still. In Her Story, everyone involved knew the conversation was being recorded. This time you're picking through an illegally acquired NSA file dump! That's your starting point! Even when people know they're on camera (which they often don't) they probably don't know they're being recorded! Indeed, the cam girl explicitly says "no recording the show"! Vidbud Matthew described two videos where the main character appears to be having a wank off screen! Which I didn't stumble on and haven't looked for yet! Because I don't want to search for "jerking off", or imagine the sort of things that dude might say out loud while honking his pud!

The question of whether Telling Lies is voyeuristic or not doesn't necessarily have a bearing on the quality of the game -- I do, in fact, think it's good and enjoyed it. But the idea that it isn't voyeuristic is some laugh.