If you click on a link and make a purchase we may receive a small commission. Read our editorial policy.
Developer: Simogo
Publisher: Annapurna InteractiveRelease: Out now
On: Windows
From: Steam
For: £10, $13, €10.79

Sayonara Wild Hearts is a sort of rhythm action arcade game, and as I played I kept getting flavours of different things. In terms of video games I felt Thumper, then (less obviously) Fe, plus SuperHot and Persona 5. Oh, and that mine cart level in the first Harry Potter game.

But Sayonara wild hearts is also the drag race scene in Grease, the "Get in loser, we're going shopping!" of Mean Girls, almost all of Edgar Wright's version of Scott Pilgrim Vs. The World, playing DDR in the arcade at the bowling alley when you're 13, the chaotic energy of DeeDee from Dexter's Lab, and the first time you go to a club and it has those cool lasers. I barely managed to keep a lid on it all. 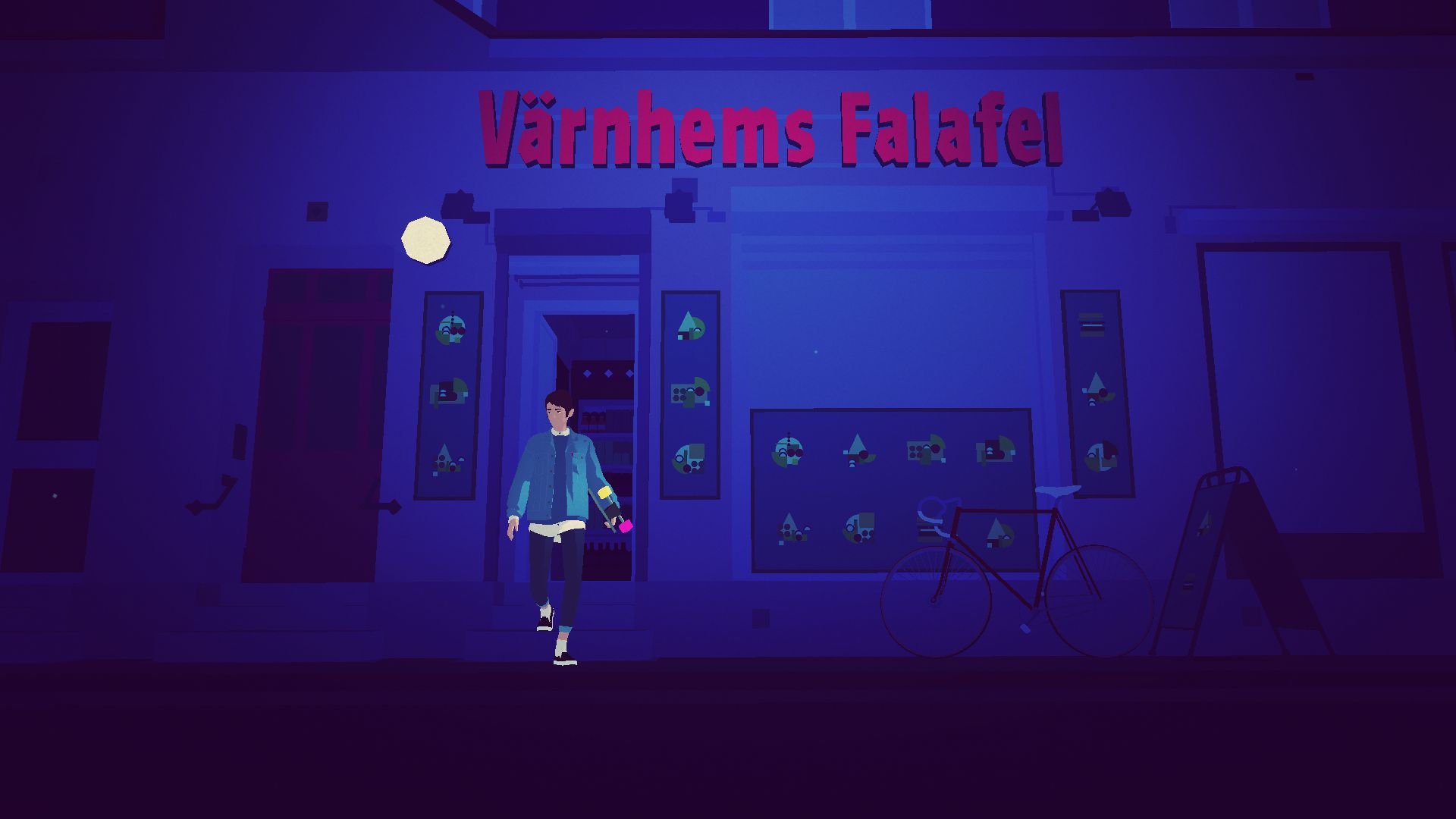 In Sayonara Wild Hearts you are an unnamed heroine who has suffered a recent heartbreak. This coincides with some kind of celestial backstabbery between beings to do with both the zodiac and the Major Arcana cards of the Tarot. It becomes your job to restore balance to...stuff, through contests that are a combination of dance battles, high speed races and regular dust-ups, between mysterious masked motorbike gangs across strange, hyperunreal landscapes. Through this all, the girl will learn to deal with her own emotional problem (a tale as old as time, meaning Sayonara Wild Hearts is also Labyrinth/The Wizard Of Oz/Sucker Punch/Whatever).

Her emotional problem can, it turns out, be controlled entirely via WASD or the arrow keys. It takes a bit to figure out exactly how responsive the controls are, since they have a bit of resistance to them, like pulling a rubber band or poking a stress ball. And, importantly, you have to move in time to the music. Sayonara's excellent soundtrack is a collection of swooping, pulsing pop songs that feel both modern and retro at the same time, and it's a big part of the game's appeal. Levels and obstacles swing to the same beat as the music you're listening to, while lyrics will soar as you come to a particularly cool jump. 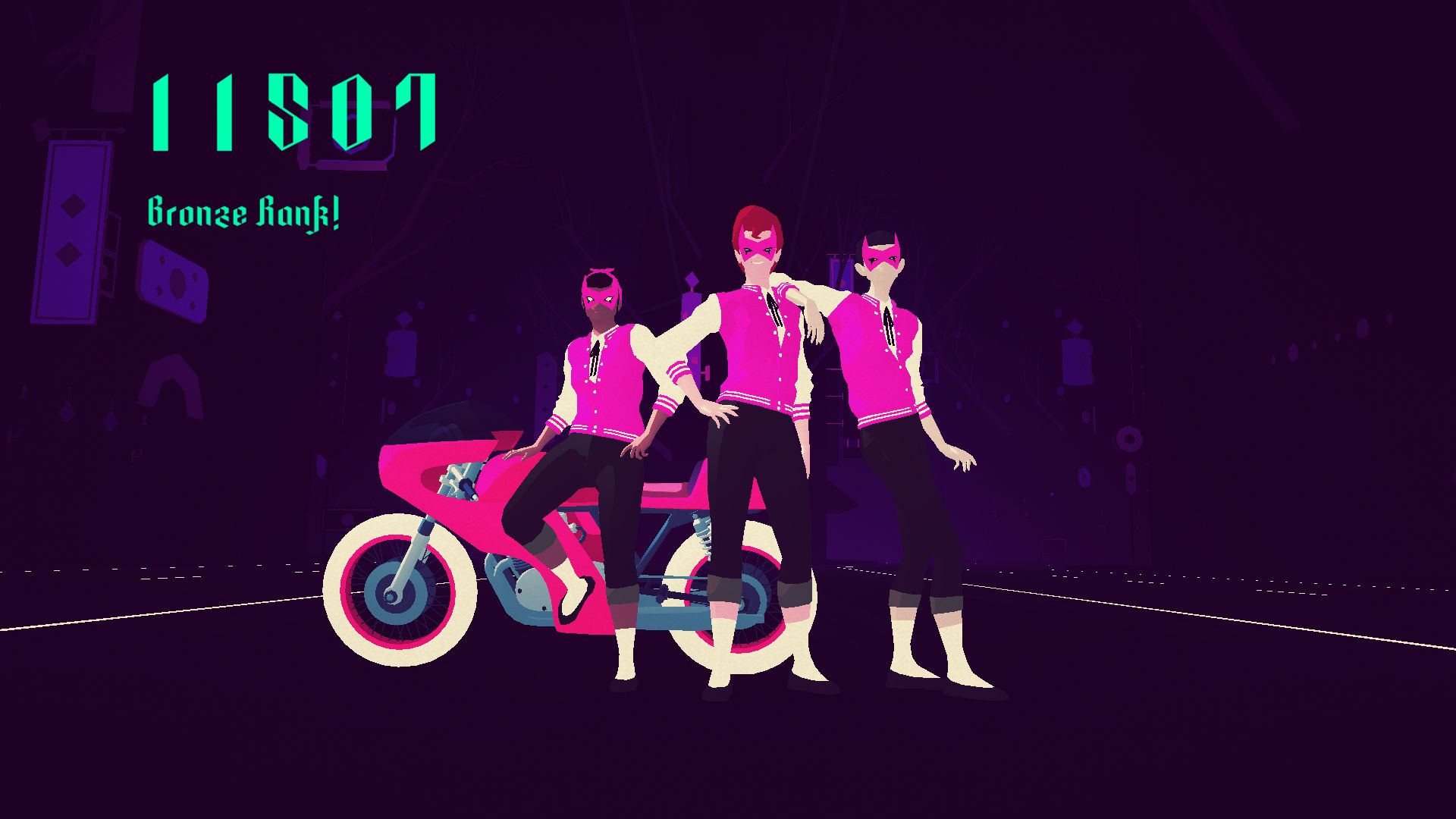 Sometimes you are speeding through what looks like San Francisco on a skateboard. Sometimes you're on a rumbling motorbike, and that motorbike has forward-mounted guns. Sometimes you're not even on a road at all, and are just falling through a psychedelic, non-Euclidean dreamscape. For one level, and one level only, you have a big ol' classic convertible, which turns like a shoe and does huge slides that swing the back end out. In the hands of a more skilled player, all the collectible hearts in that level could be scooped up with the swings of the car's arse, and it would be spectacular. But I was not very good at Sayonara Wild Hearts.

Driving through the strings of hearts on screen are, like Pac-Man's lil' tictacs back in the day, the principle way of getting points. And at the end of each level, you get ranked (like in the Olympics), based on how many you got. I was usually ranked bronze, and sometimes silver - which at least means my near 30-year streak of being just adequate at everything remains unbroken. 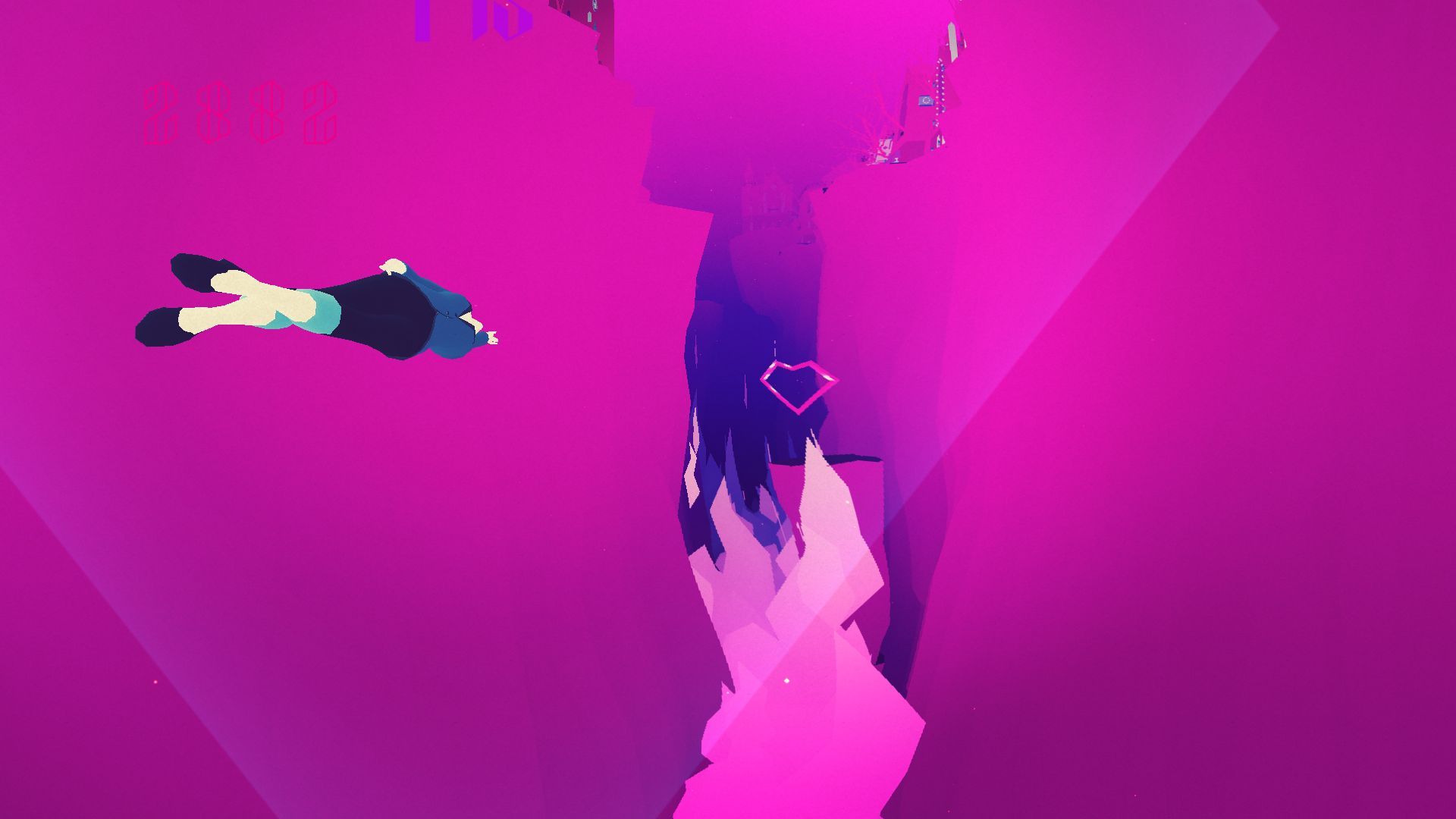 There are other ways to get points. As well as the hearts, there are also little golden diamond shapes in daring or difficult-to-reach places, which net bigger numbers, larger hearts which also boost you, and rhythm/quick-time button presses that call upon you to mash the spacebar at the right time - the righter the time, the higher the score. Ooh, and when you do a near-miss on an obstacle, you get a few bonus points. Or if you're doing a section where you have a gun (or in a few levels, a bow), shooting down enemy attacks also gets you extra.

If this sounds like a lot, it sort of is. Except it isn't. Sayonara Wild Hearts teaches you its fundamentals, and then constantly changes what you do with them, and how you do it. A couple of times, it even shoots you into first-person view. You might be switching the direction of gravity, or using portals at speed. One early level is set in a forest, where you chase a motorbike animal girl gang while riding a stag. Then the gang transform into a three-headed megazord wolf, which fires grenades from its eyes and razor wheels from its mouths. In another level, set in a cityscape, you cut your enemy in half with a sword, and then they are two people, who switch you between three different tracks by clicking their fingers or doing a high five in time to the music. 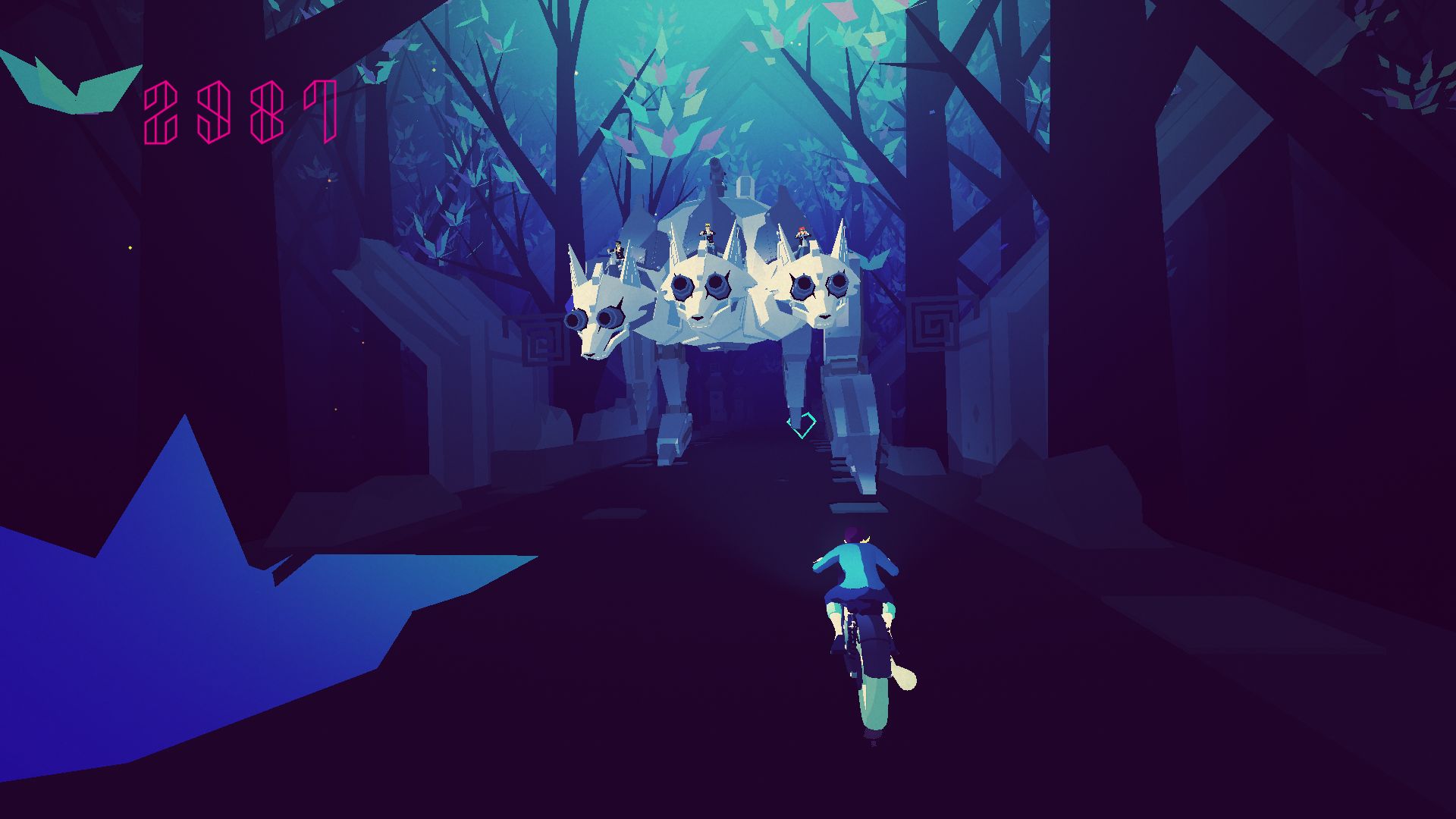 You're constantly kept on your feet, but somehow, you mostly sort-of know what you're doing. You can skid your way through the levels with more or less success in about an hour, and that does mean you could easily repeat it enough to get very good. But while I did enjoy my time playing Sayonara Wild Hearts, and was impressed by the creativity on show, I wouldn't play it again myself. As often as I marvelled at the cleverness, I kept finding myself thinking the twists and changes were done just to be clever. And it dumped too much uncertainty on me too often, to the point where I got cross at repeating the same few seconds, or at the game's flow stuttering due to my repeated failure, and playing the same musical flare over and over again like the needle skipping across a record.

One level in particular, which becomes a sort of ode to game tech, has some bits where you're drifting through wire frame mazes, and other bits where you're doing an Asteroids-alike on the front of your enemy's VR goggles. I found the controls here handled way too differently from how they did in other levels, and I couldn't get the hang of the perspective. I hated it so much by the time I finally succeeded at it, that I didn't even get any joy out of the triumph. Throughout the game, if you're repeatedly dying on one section, you'll be gently asked if you want to skip the section. But it feels like you've disappointed someone every time, because Sayonara is so sleek. God, sorry, haha, I'm such an idiot, sorry, I shouldn't even be allowed to play you. 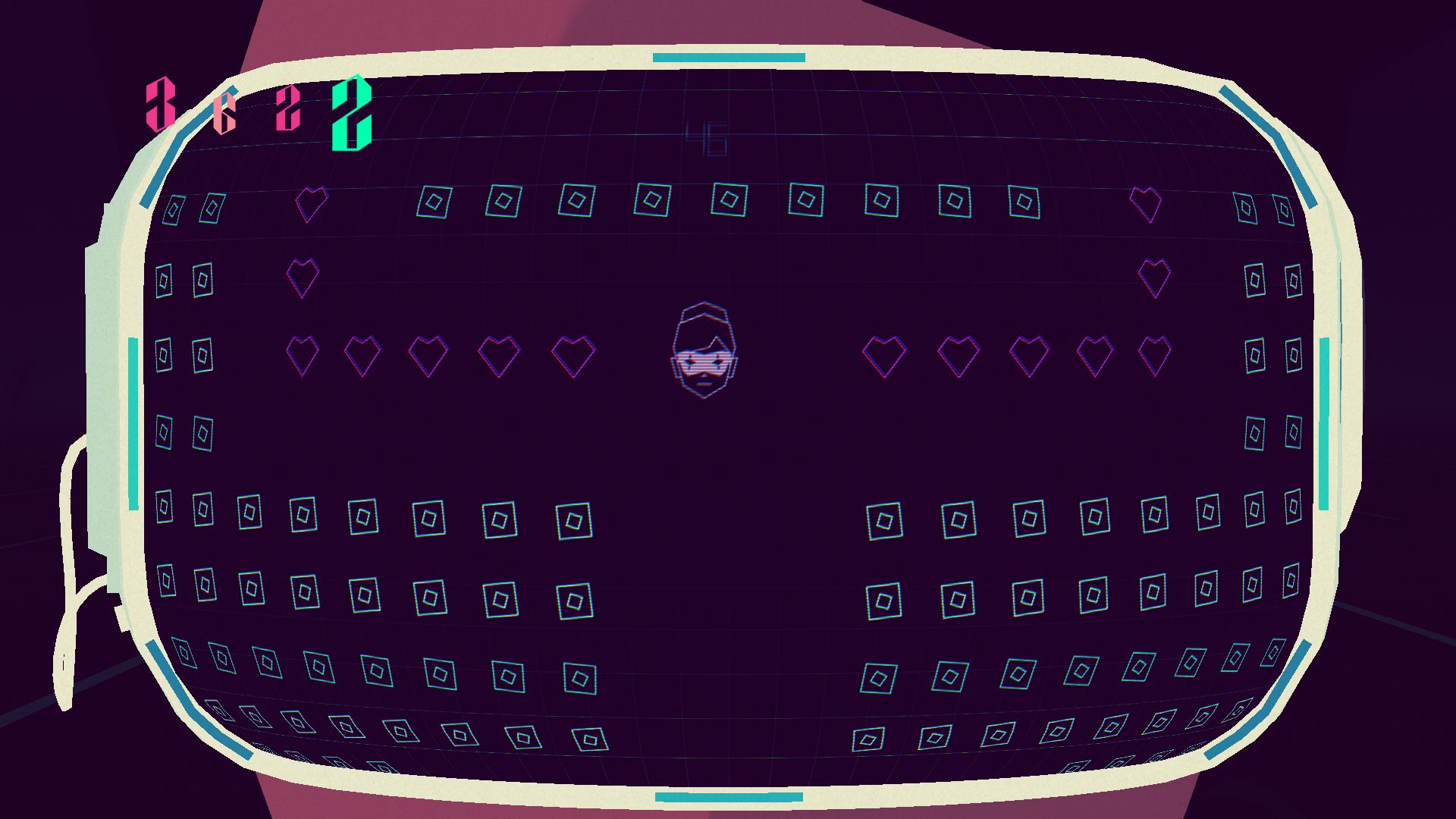 That's the heart of it, really. I think Sayonara Wild Hearts reminded me of all the cool things I've liked over the years, because it's not saying anything deeper than "Cool things are fucking great, and being cool is great too." Which is fine. It's all said in this incredibly alluring wash of pink and blue and purple, this brief flowerbloom of a game, this stylish, inescapably cool thing that references Tarot without, you know, trying too hard about it. It is the older girl with a leather jacket who smokes behind the gym. And, like her, it is intimidating, and will make few concessions to you. You may, perversely, find that you want Sayonara Wild hearts to like you.