If you click on a link and make a purchase we may receive a small commission. Read our editorial policy.
Developer: A Sharp
Publisher: Kitfox Games

The war chief is dead. Aminai, our wisest herder, took her place but was struck with a deadly illness. Crop after crop failed as the world became darker and colder. Our herds are pitiful, barely half of our people have a horse. Our neighbours, once toasting our clan, raid us without mercy, burning defences and stealing precious cattle. Storm worshippers from the south sense weakness and attack, crowing that their gods are ascendant. Our magic dwindles, our rituals and offerings fail. The gods are at war, say the spinners. It didn't fully dawn on me how transformative this would be for the whole valley until a dead god fell from the sky.

Part of me was pleased. King Of Dragon Pass is back. And Six Ages has improved on it in every way. 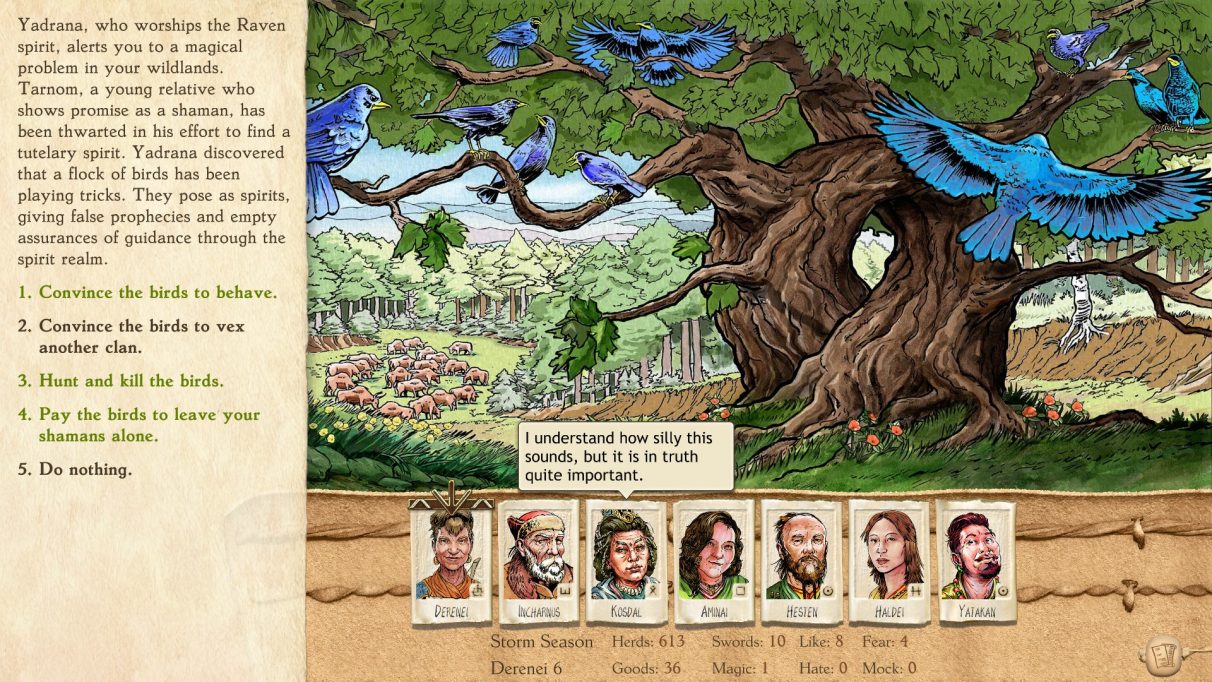 It was all going so well. My clan, the Purple Bees, were famed for our wise leaders, our busy diplomats, and our precious beer. We were popular and prosperous, and our suggestion that we form a kingdom with the other clans was starting to gain traction. But things change. That's something core to Rider culture, and probably key to why things got so bad.

So what's a Rider? Unlike the Rams, and the Wheels with their chariots, we're the people who can ride horses. That's our thing. Six Ages (which unfortunately, and owing to what I'm assured is a complicated story, currently only runs on Windows 10), you see, is set in a fantasy world where humans are roughly in what we'd call a bronze age. Their cultures are complex, nuanced, and heavily intertwined with their various mythologies and interpretations of the weird and dangerous world they live in. They all have their own ideas about who the right gods are, how things should be done, and who the enemy is. Like King Of Dragon Pass before it, you're responsible for leading a newly founded village to prosperity and prestige within the region. You choose seven nobles from among your few hundred people, including a chief, to form the clan ring, which will decide on all important matters.

Like its predecessor, it's all about the decisions, big and small. Your neighbours taunt you - do you raid them, ignore them, or taunt them back? A new form of worship arises. Do you endorse it? Elders are complaining about the noise from a warrior who's entertaining the clan's children by skiing. You might suffer a monster attack one day, and be judging a cooking contest the next, and sometimes the best thing is to not get involved at all. You don't really exist in the world, but are more of an unacknowledged guiding spirit who represents whatever the ring decides to do. You don't have to roleplay it. You absolutely should, though. 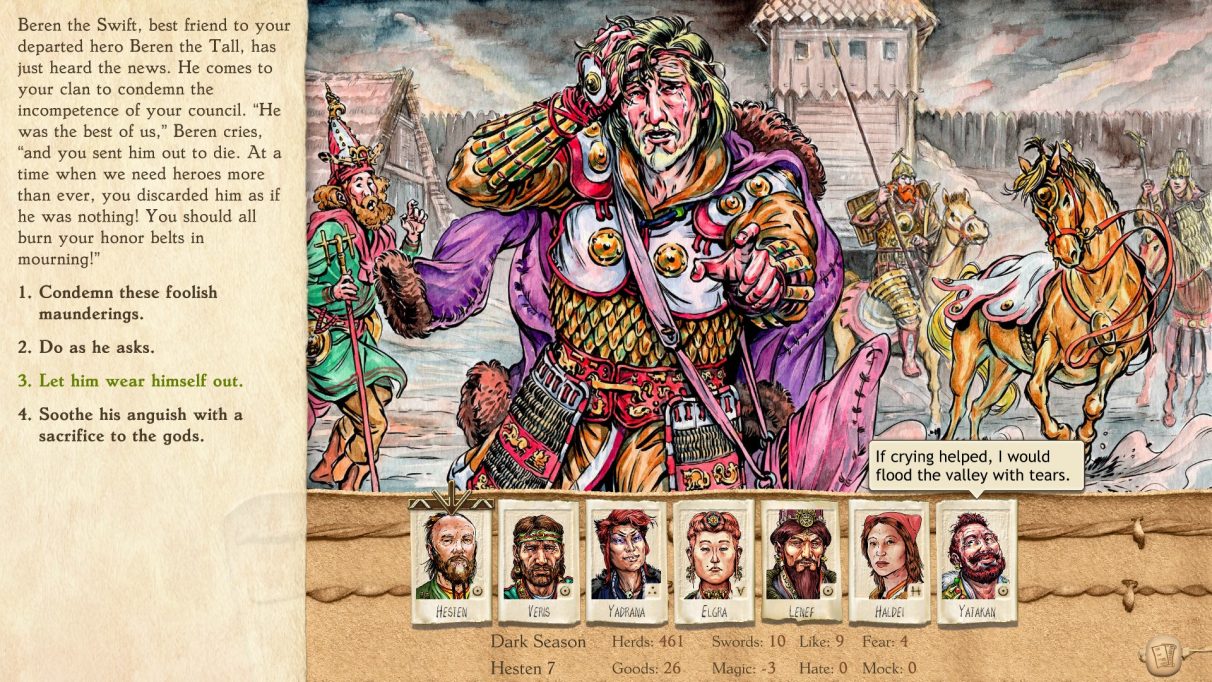 Why? Because characters are more than numbers. Clicking on a noble brings up their advice or opinion on a current situation, or often simply some rambling anecdote or snarky remark about another clan or culture. They're fallible, nuanced, situational, and sometimes weird. The war chief I mentioned earlier, Derenei, was a talented fighter and leader, but she won my heart when a priestess visited from a distant, unfamiliar clan, offering to bless our horses as a prophetic dream had told her to. The question before my ring of nobles was how to respond to this. Derenei's response, word for word, was "Ooh! Ooh! Let me sing her a song!".

The priestess was delighted, and shyly remarked that she couldn't sing, so she "and her mount" enjoyed the song very much. In gratitude, she entertained us with stories of her homeland, cheering the whole clan up. Sometimes it's genuinely heartwarming. At other times it's hilarious. And any time an opportunity for singing came up, Derenei was there. And of course I indulged her every time. 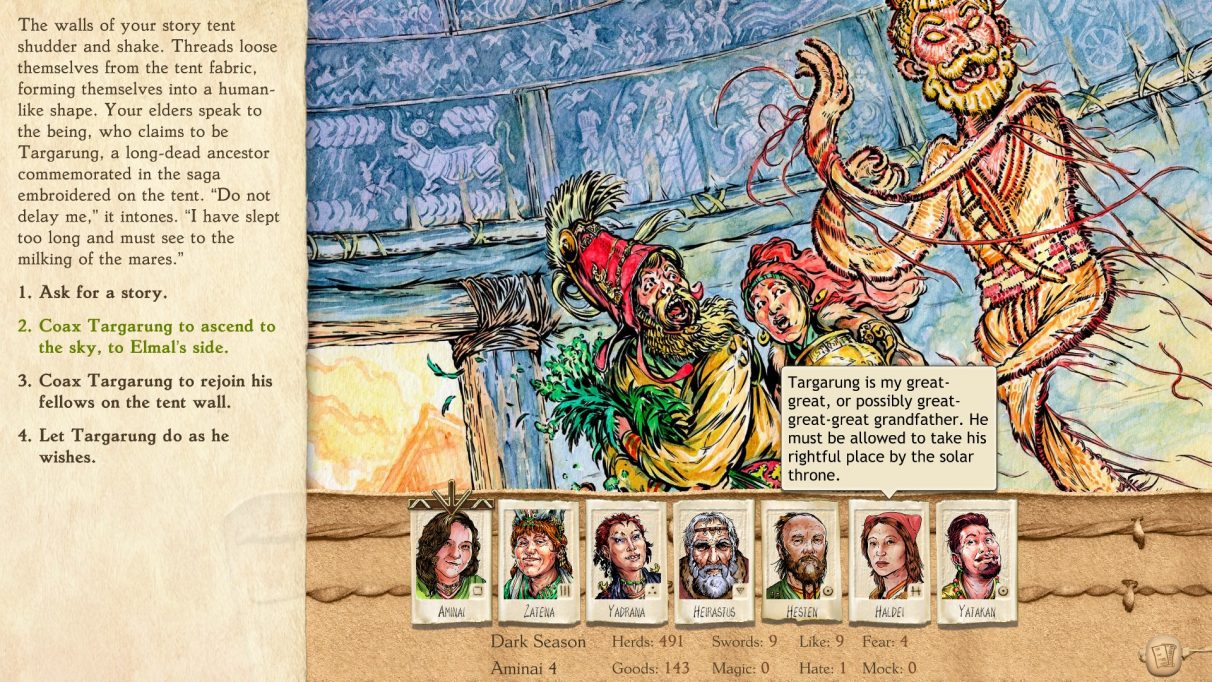 A group of disgruntled people once complained to my ring that one of our number, Tolya, was hassling them with lots of frivolous lawsuits. The ring convened without her to form a response. Some of them wanted to change the law allowing this, but another insisted that restricting the people's rights because of one person abusing them would upset them. Derenei's advice? Resolve this crisis by publicly roasting Tolva in song.

I lost it. Imagine showing up at work to dispense wisdom from on high, and then your boss goes full Rebecca Bunch on you. And then a few seasons later, Derenei bit off too much in a fight and some absolute bastards gouged out her eyes. 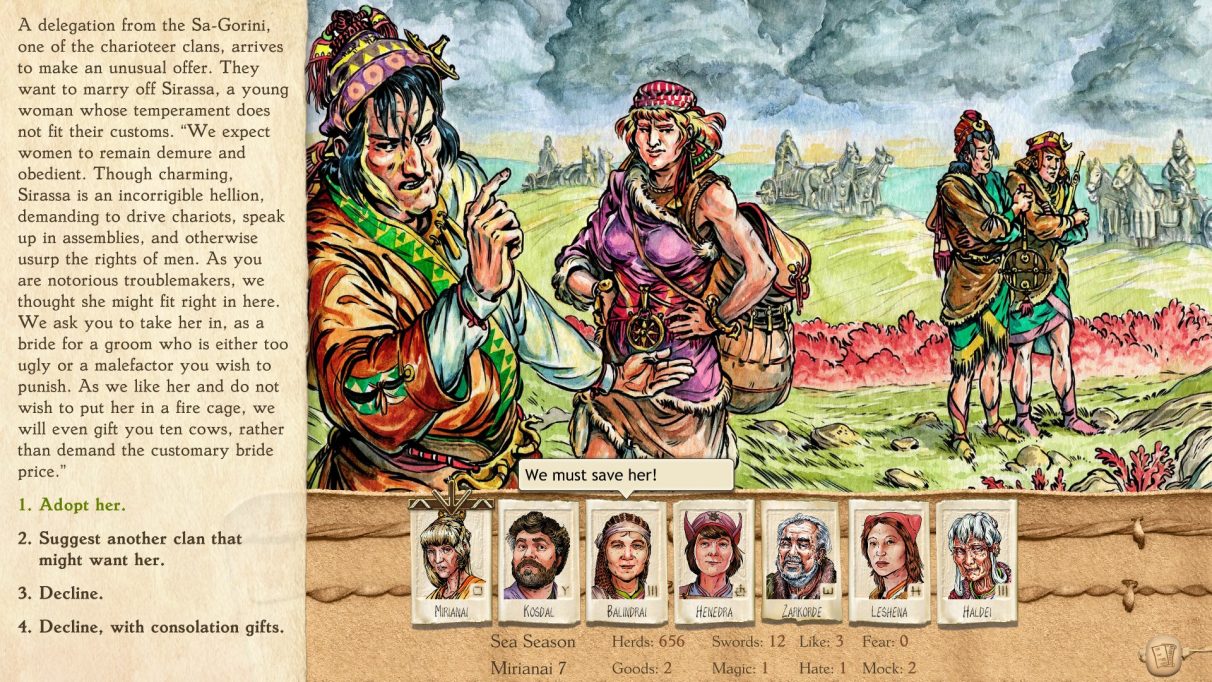 That's why Six Ages is special. The same people cleaving people in twain are also the ones who love foraging, or who obsessively blame the Wheel people for everything, or just really love goats. Both individuals and cultures are brimming with character, and you get to direct and feel like an active part of it. It's brutally violent, it's tragic, intelligent, and weird. Sure you have your fantasy monsters (although even those are much more interesting and less anthropocentric than just about any other fantasy setting - elves, for one, are freakish walking plants instead of pretentious Aryan dickheads), but much of the weirdness is cultural - the people in this land are as odd and self-contradictory as all human cultures.

One event has three families arguing over who should adopt a magical baby they found in a river. One of the options is "Put the baby back in the river". It's absurd, but it makes a sort of sense in this society. All this makes relations with neighbours more complex too - Riders are not the only settlers in the valley. 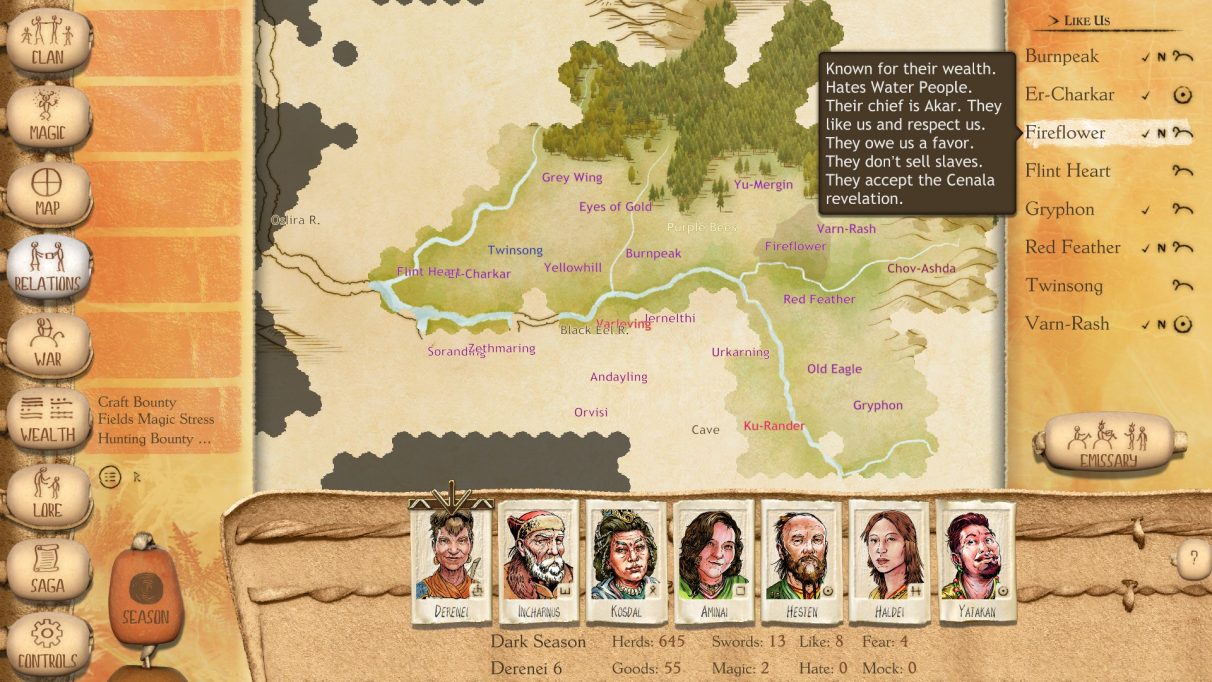 Much as I loved King Of Dragon Pass, it was too opaque for its own good at times, and its successor has made huge improvements. In particular, the effects of your actions on clan mood and relations are shown as they happen, and diplomacy in particular is both much better presented, and more interesting. Of all things, Alpha Centauri came to mind, as alliances and friendship are much more active and useful - neighbouring clans can like you but still have little respect for you, or hate but also fear you. Both will affect their behaviour - a clan may not like you, but might deliver something you ask for because they're afraid of you. A friendly clan might gladly trade, but refuse to ally or take you seriously in battle... until someone holds a riding contest and your warriors trounce the whole valley, or your explorers find a powerful secret of a god you both worship, or a third clan takes your opinion seriously enough to replace their chieftain.

Diplomacy in general is a huge highlight. I was very aware of who was who, and invested in specific relationships, to the point where my clan became noted for sending out many diplomats. Battle is more involved, with multiple stages and tactics, and more feedback on how a fight is going. There are even options to parley, and talk or buy off attackers, and several times I was engaged in a fight only for a third clan to show up and join in. 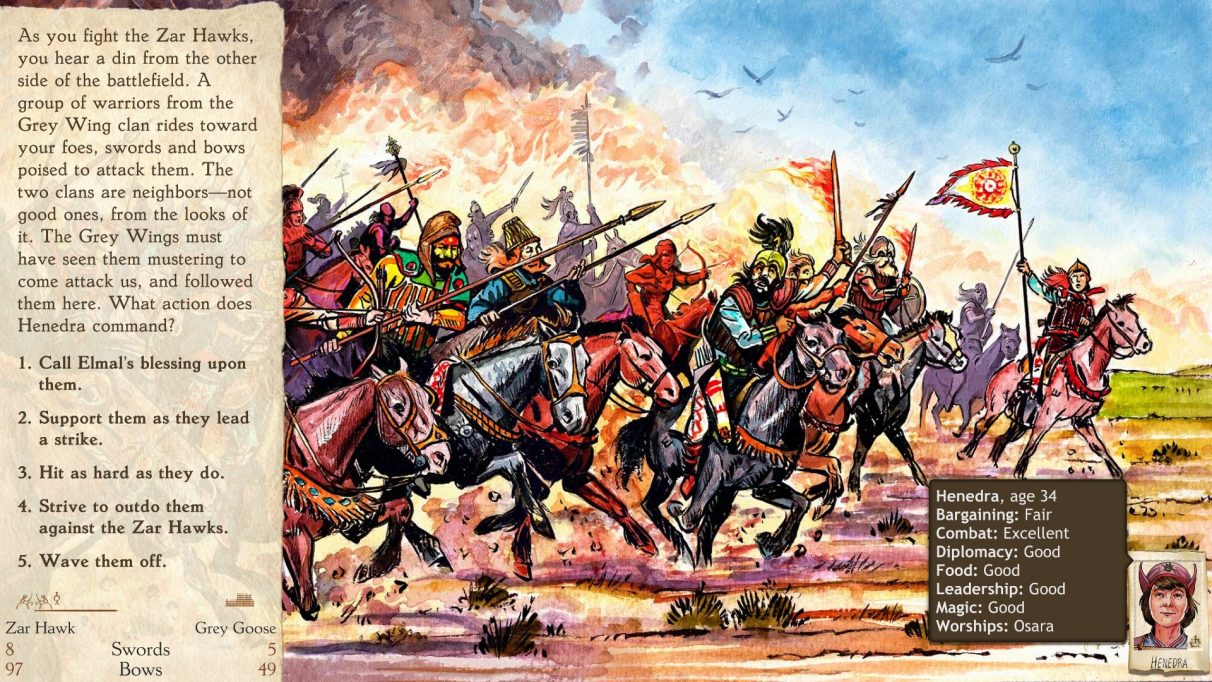 Managing food and population is simpler too - raiding rivals during planting or harvesting season is nigh impossible because your farmers will refuse to risk the food supply, but there's no need to manage labour or crop ratios. There is, however, soil erosion, which is countereacted by clan-wide "ventures" taking about a year each, in the background, which can also be used to forage, hunt, craft luxuries, or lay groundwork for future plans. This ties in with the main plot, which I'm hesitant to spoil details of. Your ancestors fled encroaching ice that crushed their city, and over time it becomes clear that this area too is not safe. The gods are warring, cutting you off from much of their magic, and the soil is producing less and less food. It's a much more interesting situation than it sounds like, and RPS contributor Edwin Evans-Thirlwell went into some detail about how well it's integrated into the setting. 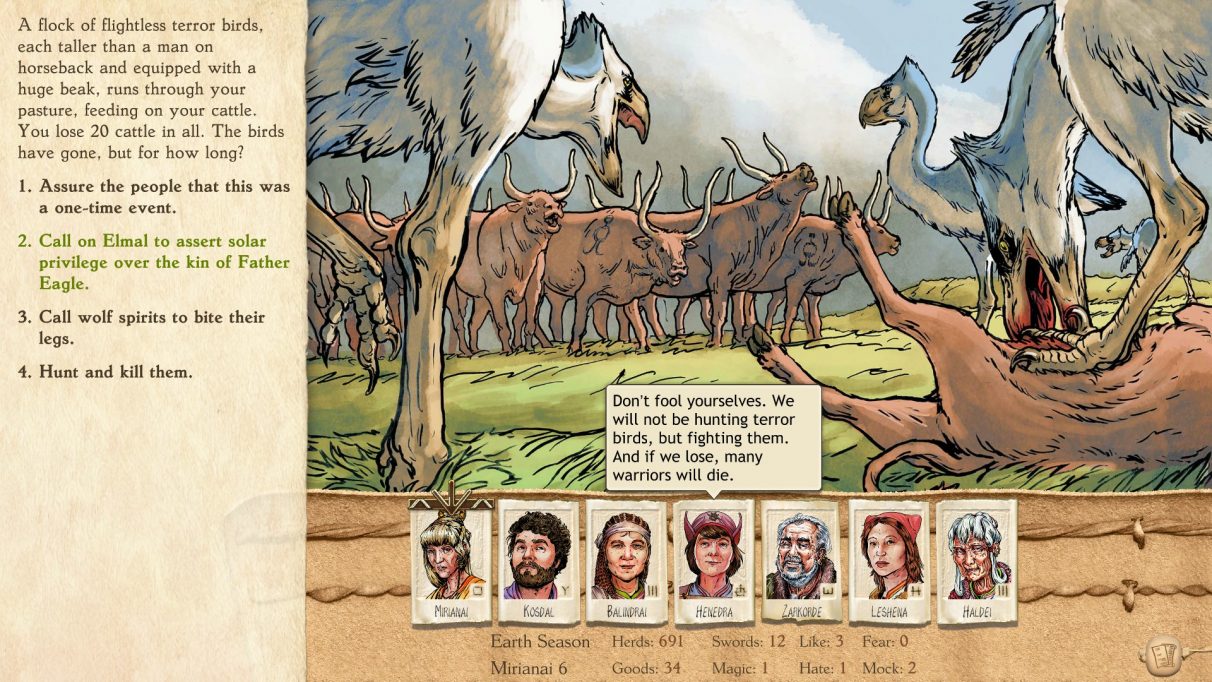 It's also key to why the Purple Bees fell from glory. As the world changed, neighbours who admired us became targets for our last-resort raids. Trade caravans became more desperate. More foragers and hunters were sent, and often died, costing us talented nobles. As magic dwindled, our forays into the gods' realm to seek their aid became more dangerous. Cattle were slaughtered for food, making us poorer and even more reliant on raiding, which in turn made us an easier target through injuries and malnutrition. The failure spiral is rough, but we started to turn it around. We struggled on for a few more years, but I made one too many poor decisions. It was all over, and my people were lost to history.

I loved every minute of it.