"With more planned." For months, that's all we've had to go on, when it comes to the nagging question of whether or not the wonderful Slay The Spire will ever stretch beyond its three playable characters. Third character The Defect's relatively new, and the focus is currently on spit'n'polish for this week's escape from early access, so I'm not holding my breath for an official newbie any time soon.

I don't have to, because the community's taken advantage of Spire's newly officially-enabled mod support to add a weird and wonderful assortment of new card-clobberers to the game. Given the almighty balancing act inherent to a numbers game like this, what I'm truly surprised by is how good some of these are. Inventive concepts, not too much of a power-trip or too much of a kick in the squishies, and only a little bit of brazenly stolen art. So, here are five of the Slay The Spire character mods I dig the most (so far). 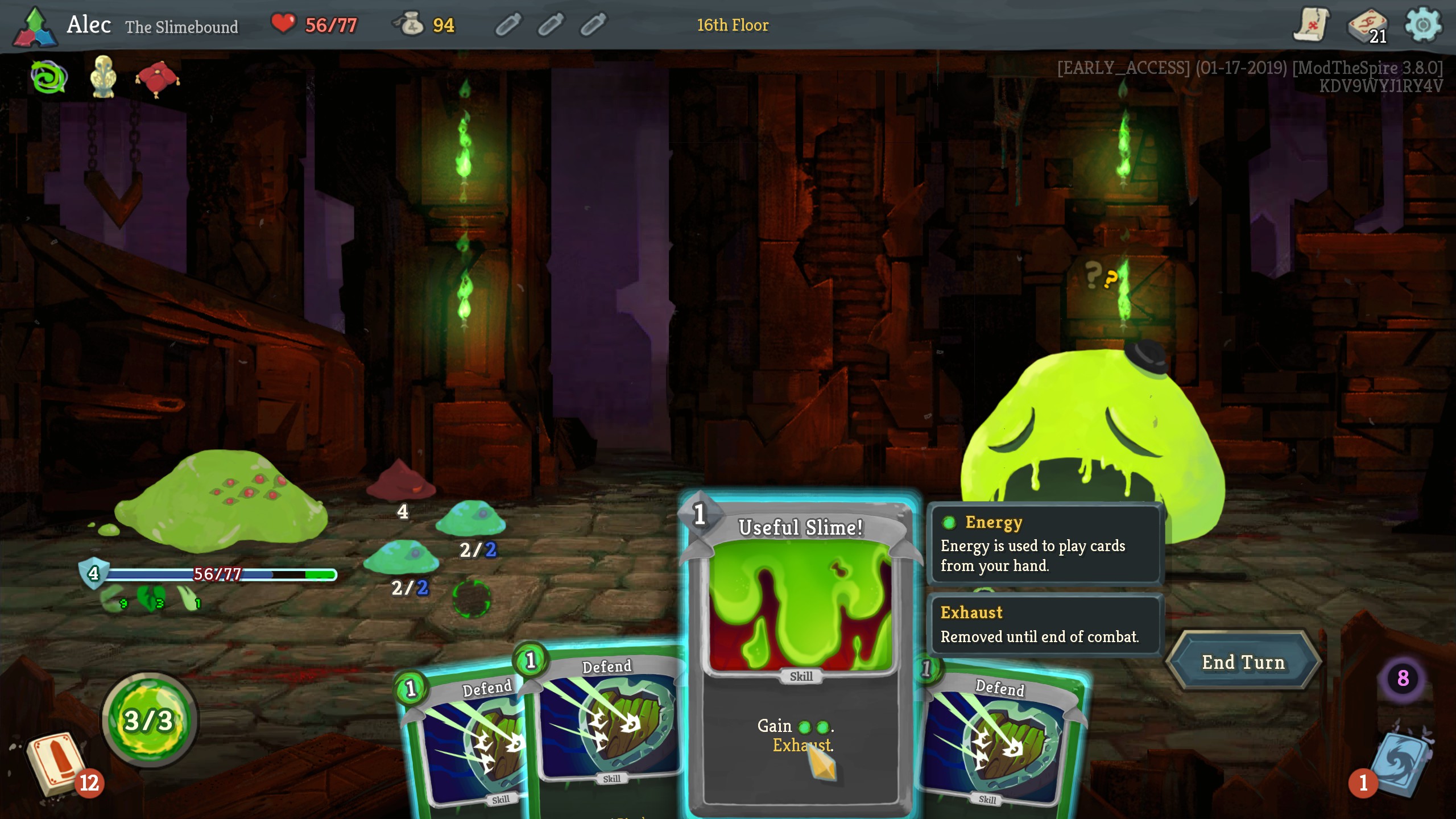 Probably the most instantly appealing of the new character mods, given that it uses one of the game's more iconic baddies (the self-duplicating Slimes) and that a many-eyed blobbo friend is such an overt departure from weapon-wielding bipeds.

Beneath the mugging-for-attention surface, it's also easily the strongest third-party class I've played so far. It absolutely owns its concept, riffing on The Defect's auto-firing Orbs to employ auto-attacking, defending or HP-regenerating Slime-kids - with the delightful twist that spawning one temporarily consumes some of your health. Unless you build your deck in such a way that you can prevent this health loss, thus earning yourself both a family of gelatinous defenders and oodles of precious hitpoints.

There's also a whole card-family based around the idea of Licking - coating your foes in 'orrible goo, which in turn opens them up all manner of further special attacks. Honestly, it's all so well tied together, with its own card art and colour schemes and a minimum of reskinning. Also, the floor boss Slime is furious if you encounter it, screeching 'Minion! Betrayer!' on arrival. Little touches can do so much heavy-lifting.

If there was one mod that the devs should seriously think about officially incorporating into Spire, it's this one. I love my Slimes. 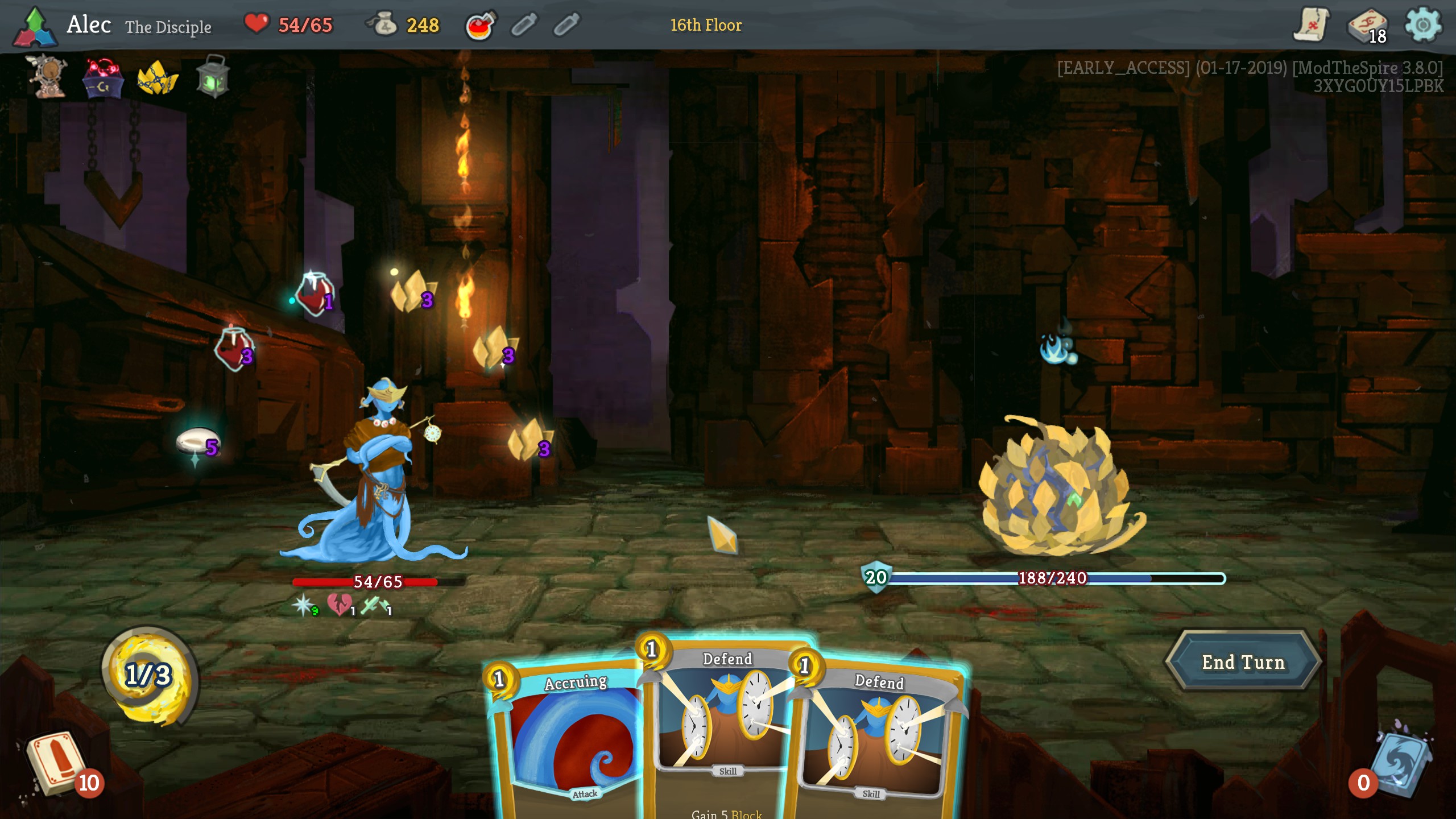 The Disciple, a sort of tentacular time-cleric, feels like such a natural fit for Spire. The art's a clean fit, and, like so many things in Spire, there's an implied relationship to other creatures in the game - specifically the fearsome Timekeeper Act 3 boss-bastard. Clock iconography-based consistency within the card art, even the standard Strikes and Defends, helps build that sense that this is part and parcel with the game proper, rather than a bolt-on.

It's also remarkably well balanced, despite involving all kinds of disparate elements - not just the aforementioned time-keeping, but also short-lived item summons that apply small effects per turn or bigger effects when they expire.

The stand-out addition here, for my money, is a card that shunts an enemy forwards in time by one turn. So the dude that's about to lay a 48 damage smackdown on you suddenly adopts a harmless block, or the thingy drowning in shields is suddenly left exposed. It's one of those cards that can totally change the nature of a round, without actually upsetting the overall balance of the match.

On the flipside, this card made me do A Big Swear: 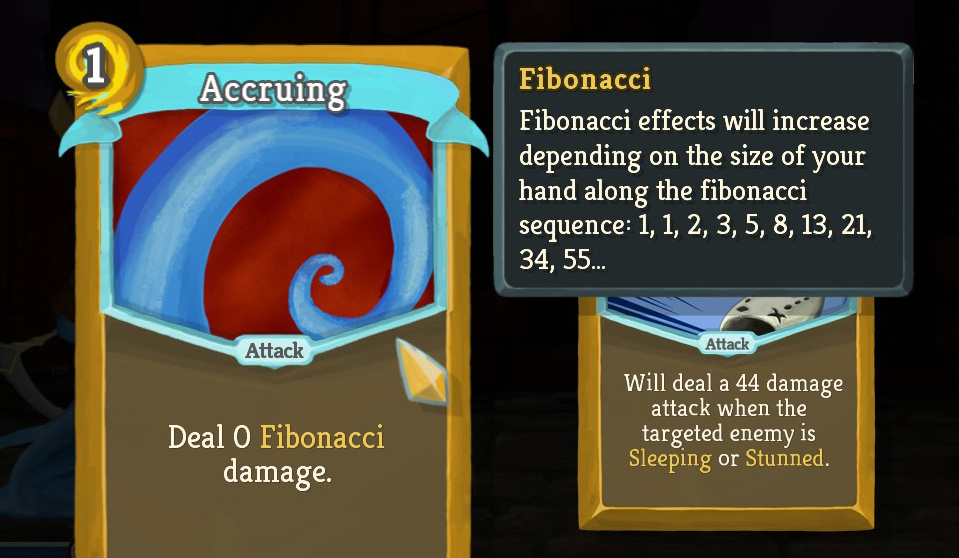 The thing about Spire is that it's stealth maths, to some degree. When it's openly declaring that it's maths, I run for the hills. 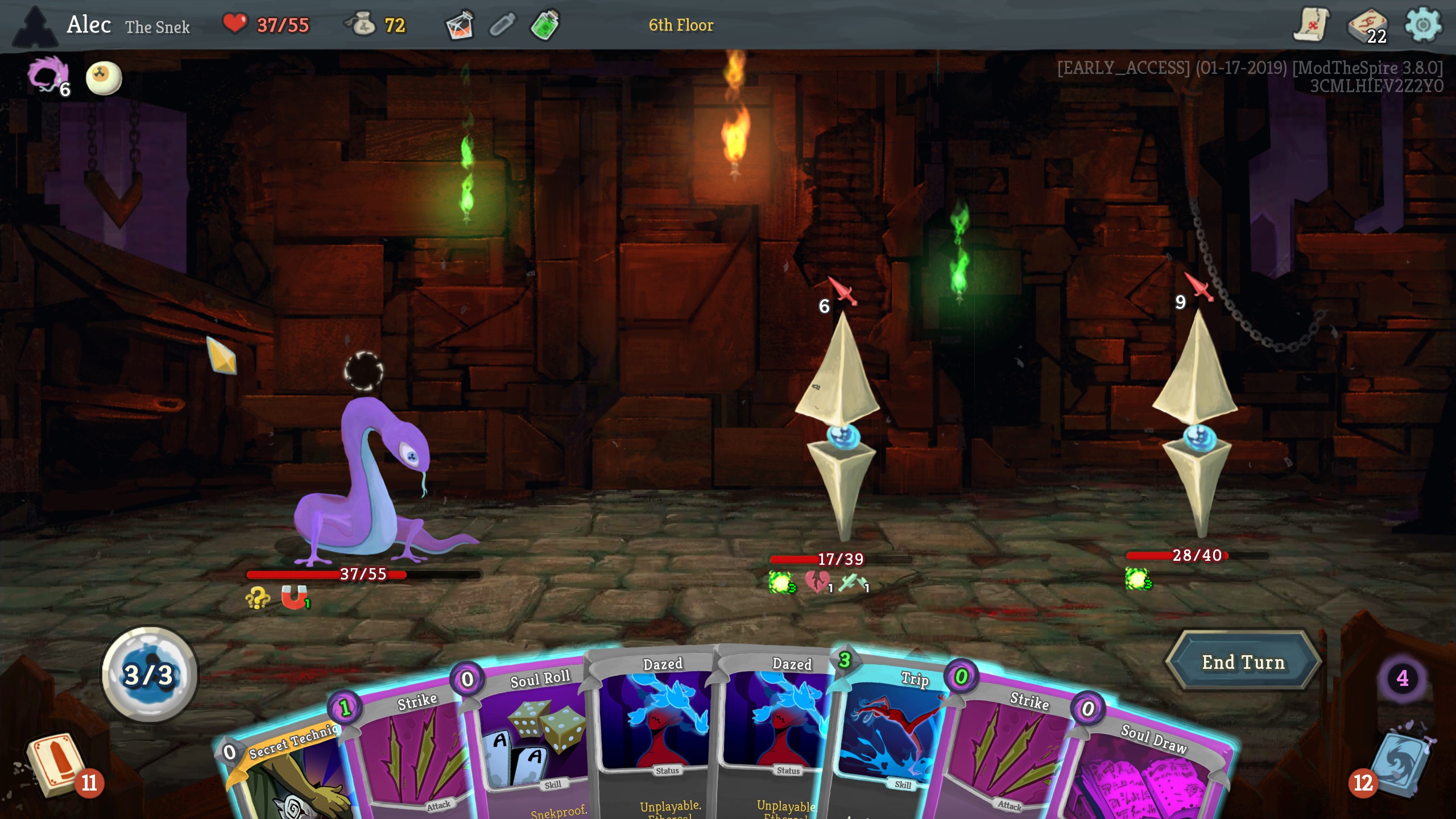 If you feel you've mastered Spire in every which way possible (liar), then there is only one thing for it: choose chaos. Choose Snecko. Or, at least, its lavender-hued cousin, The Snek.

The Snecko is one of Spire's most erratic enemies, its foremost power being to merrily juggle the cost of your cards. Sometimes, this makes it a nightmare opponent - even a single, basic Defend or Strike card can consume your entire turn - but other times it's the Snecko signing its own death warrant, as you spam with it 0-point attack after 0-point attack.

I.e., with this mod, sometimes it's you signing your own death warrant. You are Snek. You are chaos. Every one of your cards a different cost, every turn, every fight.

This mod doesn't stop at point-remixing - it strives to make a virtue of the unknown. Specifically, in that you can add mystery cards to your deck, which temporarily turn into random Attack or Skill cards each combat. And the more mystery cards you have, the higher the multiplier on certain cards - a bit like the Ironclad's '+2 damage for every card with 'Strike' in its name jobbie.

To be honest, I did find the Snecko class slightly overpowered, particularly in the first act, but it's such a jolly new take on Spire staples that a few runs with it are irresitble. I dig the heck out of the rich, purple colour scheme, too. 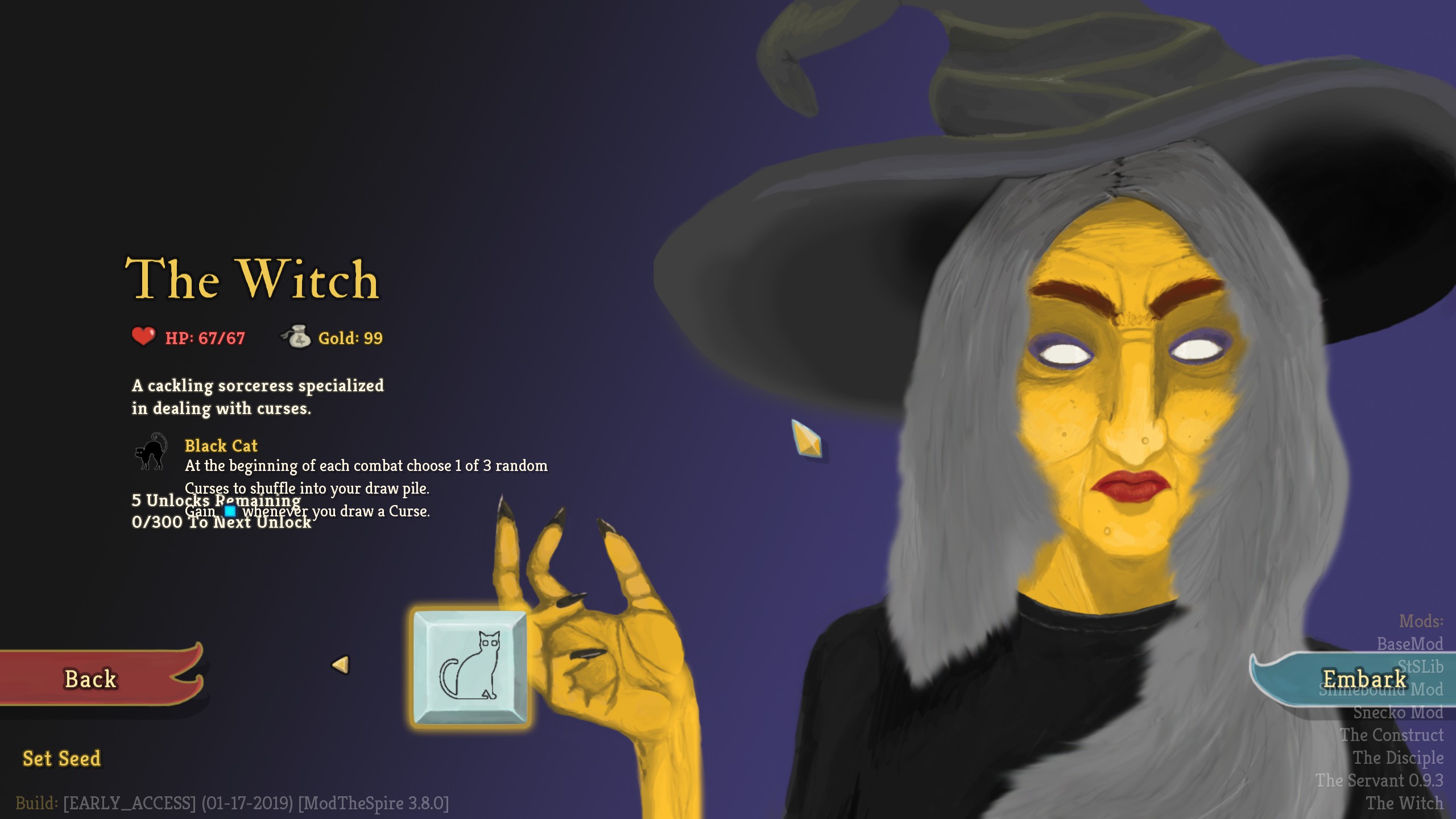 What The Witch lacks in thematic kinship with the other denizens of the Spire - simply 'a witch' amongst this lunatic menagerie is a bit How Do You Do, Fellow Kids - it makes up for in terms of taking an existing Spire idea and running with it. That idea is Curses, cards that either inflict negative effects upon you or simply fill up your hand uselessly.

Some builds, particularly for The Ironclad, can turn curses into a sometime virtue, but The Witch is absolutely built around them. Innately, she gets a free energy point whenever she draws one, and you can end up with stuff like dealing out big damage to all enemies whenever one pops into your hand.

It's a high stakes game, as some curses mean some serious self-harm, but pulling it off is a satisfying balancing act that feels truly in keeping with Spire's essential risk-management ethos. Also, she can summon bats and cause people to rot. She's a good time, even if she does look just like Grotbags. 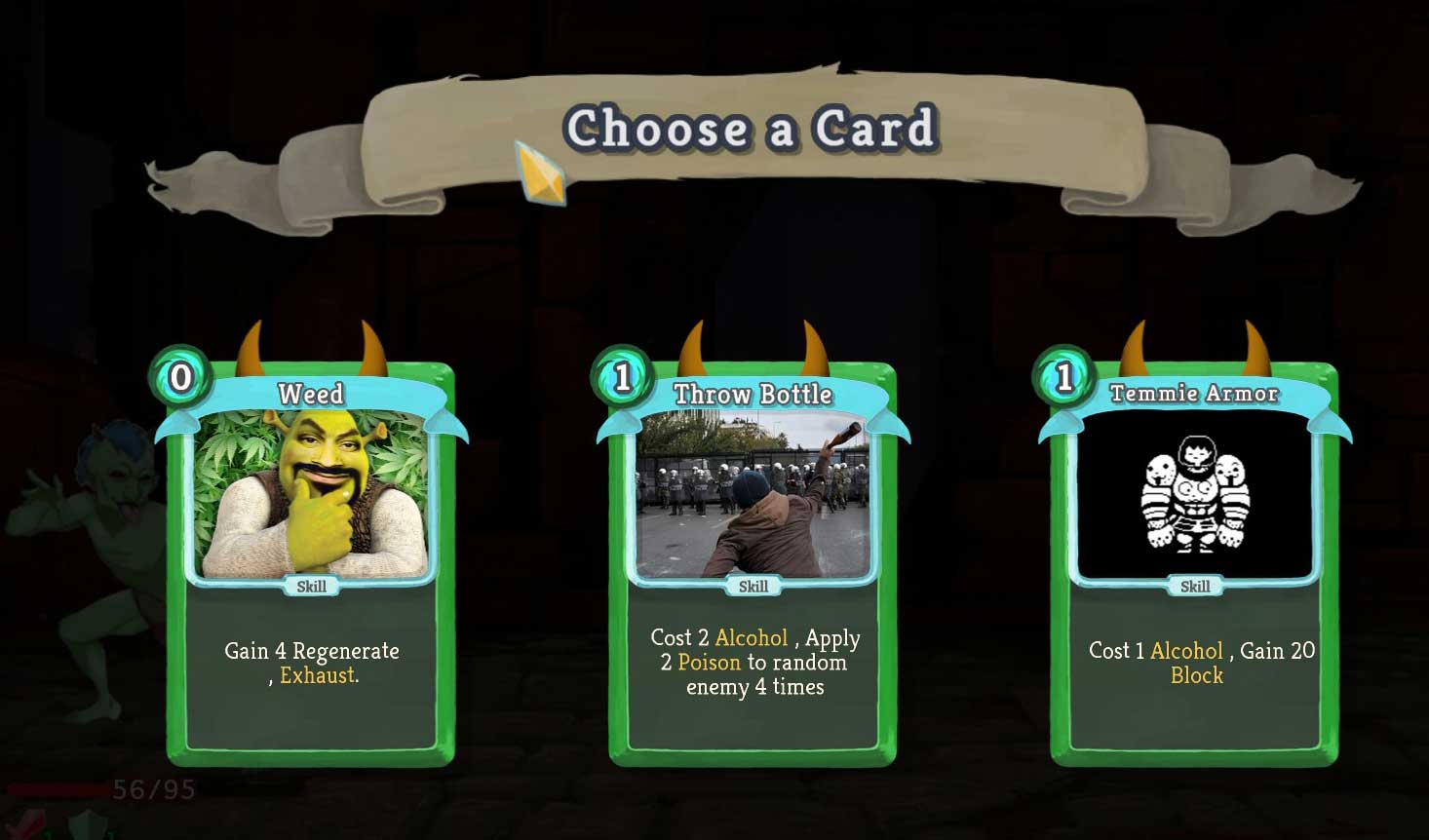 It's based, loosely, around the Drunken Master concept - i.e. the more boozed-up your character is, the more than can do. So your average turn is divided between playing cards that increase your Alcohol, and playing cards with bigger effects depending on how over-the-limit you are. For instance, you can heal this way, but doing so uses up all your booze (until the next Alcohol-granting card) and thus you might not be able to play a meaty attack for a while.

It uses similar sorts of of cards to those that you'd usually expect to have 'Exhaust' written at the bottom thereof, but here it's about resource management rather than a one-shot get out of jail free power. Systems-wise, it's a good fit for Spire, and all told remarkably well-judged, given that the card art and naming implies someone made it while three bongs into a frat party.