There's a new Star Wars film on the horizon, so that means it's time for fully-armed and cross-promotional battlestations. Star Wars: Battlefront 2 (now freed from microtransaction hell) is well-positioned to capitalise on this, and is rolling out its first wave of Han Solo themed content today. This includes a new close-combat map set in Jabba's Palace, some Return of The Jedi-themed alternate skins and a 2v2 Heroes vs Villains arena combat mode.

Credit where credit's due; it'd be missing a beat if the 'Solo' season for the game was exclusively focused on multiplayer content. Fortunately for people who only take orders from just one person, DICE added Starfighter battles to the single-player/co-op arcade mode.

The Jabba's Palace map looks a little claustrophobic for my tastes (I much prefer my Battlefront 2 fights messy, open and punctuated with vehicular violence), but it is an impressive showcase of DICE's mapping talents, and looks impressively accurate to the film, right down to the chill-out room under the throne-room for rowdy house-guests to unwind in. 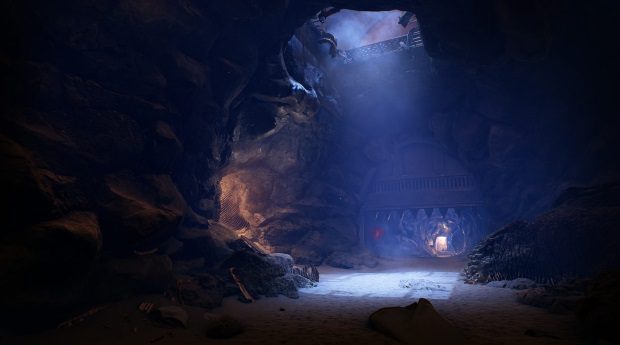 With the new playmode - Hero Showdown - being exclusively focused on hero characters, it's no surprise that a large chunk of the update patch notes revolve around hero balance tweaks. Lightsaber characters as a whole have seen some alterations, including closing off some exploits that made jumping attacks more useful than they should be. Leia's overcharged pistol alt-fire was also heavily nerfed, reducing both its damage and halving its blast radius.

As for the Starfighter Arcade mode, sadly it's not quite as elegantly implemented as the current hand-crafted Arcade stages, but you can now use the Custom Arcade playmode to play on space combat maps with a variety of hero-class ships. A good way to practice flying, at the very least, and getting a feel for when you're meant to use missiles, countermeasures and all those fancy space-toys. It's no X-Wing, but perhaps it's a passable enough substitute for Rogue Squadron for the time being.

Presumably the latter half of the Solo 'season' will be rolling out after the release of the film, so as not to spoil any of its locations. I'm hoping for a map set aboard the twisty, turny rollercoaster-like armoured train featured in the Solo trailer, but I'll happily settle for anywhere that gives me a chance to shoot at Alden Ehrenreich. I'm still unconvinced that he somehow managed to grow up to be Harrison Ford.

This is the correct version of the trailer, right?