Steam's been a bit of a naff place for finding new games for a long time now. The boffins down at Valve Headquarters seem to agree, too - over two months into their experimental Steam Labs projects, we're seeing the gang at Bellevue throwing plenty of ideas at the wall. The Automatic Show might still be absolute pants, and Micro Trailers is more satisfying as a Twitter curiosity than part of Steam proper, but I'm pleasantly surprised at how well other experiments are panning out.

Today, the eggheads at Steam Labs are unveiling two more projects to help Steam players filter through the noise.

Snorkels on, lads. First up we've got Deep Dive, a system that wrangles up all of the developer and community-given tags on a game to find its closest relatives and shove them in your face. It's building up from Lars Doucet's third-party tool Steam Diving Bell - Doucet's on board, and getting direct access to Valve's API should help Deep Dive fish up some proper great recommendations.

Hopefully. The example they've given does say Plunkbat is very similar to Risk of Rain 2. Bit of a whiff there, boffins.

Steam Labs' second new experiment, Talk Of The Town, aims to help you "discover games the Steam community is currently enjoying based on recent reviews". This tool scrapes positive reviews to find out what games people are currently enjoying. Like a top sellers chart, really, but one that judges the objective tastes of the Steam community. Ho boy. There are filters to cut off reviews by playtime, or written in the last day/week/month. 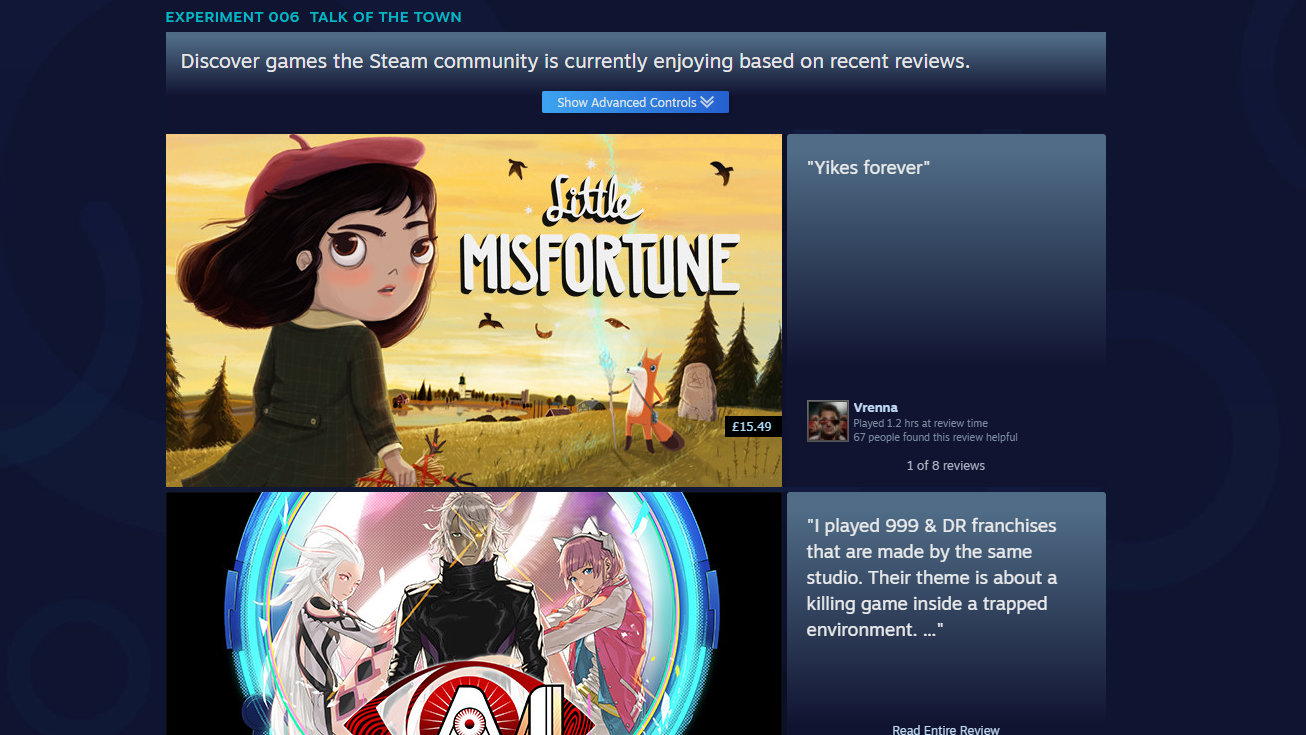 Today's update also sees the Interactive Recommender graduate to the front page of the Steam Store. It'll give you a baseline set of recommendations based on what it thinks you'll like, but you can still go dive into its guts and narrow your search. It's quite nice, letting you search for games based on popularity, age, genre and that.

I've not touched the thing since Steam Labs added the ability to ignore games you regret playing, but it's been a good wee tool for finding new games. Some lovely additions to Steam's slick new Library beta, I'll bet.

The latest experiments are ready to check out right now. More deets can be found over in Steam's announcement post.