I’ve got a hookshot. Have you got a hookshot? I bet you don’t. I bet you’ve just got hands. Borrrring. Despite Steamworld Dig earning John’s admiration (so much so that he also used the comedy word “aplomb” when describing it) I had never played it. But I’m glad to have picked up its sequel, Steamworld Dig 2 [official site], in which a friendly robot called Dorothy goes looking for her uncle Rusty, the hero of the first game, in the deep mines beneath a western-style town. To get ever-deeper she has to dig, fight insects, plant bombs, and most importantly, hookshooooot.

There’s nothing particularly new in how Dot goes about her mining. This is a deep tunnel of earthy platforming supported by metroidvania crossbeams. You chip away at tiles with the pickaxe, some bits of ground taking more hits than others and some being indestructible, while looking for precious gems with which to upgrade your bot-bod. You buy these from the workbench in town. A souped-up pickaxe means tiles crumble faster, for example, while a bigger bag means you can hold more gems.

Dig deep enough and you’ll eventually find the next pneumatic device that grants a new power. You get the most useful abilities in the first few hours. Water-pressure bombs let you damage stone or dirt from afar, hydraulic limbs allow you to sprint, and a drilling arm bores through previously-impassable brick. At one point I went to explore the east of town, above ground level, only to be blown away by fierce, sandy winds. Later, I returned with my blessed hookshot and used it to anchor myself to the rocks and pull against the gales. 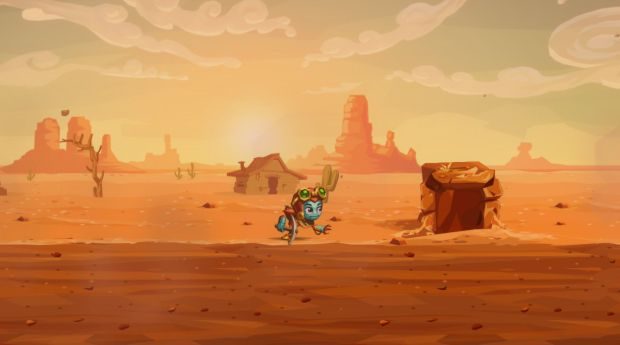 These principles are not in themselves surprising or original. But there’s a gentleness to how it’s all applied. The platforming controls are welcoming and smooth (you can climb any flat wall just by repeatedly jumping up it) and levelling up is a steady, mellow slope, rather than an awful grind. Much of that is simply the game being kid-friendly, but it’s also “fed-up-adult-friendly”. There’s something soothing about devoting twenty minutes of your evening to digging for your next robo-power, or the next milestone in this light-hearted story of greedy robots and idiot, mutant humans. 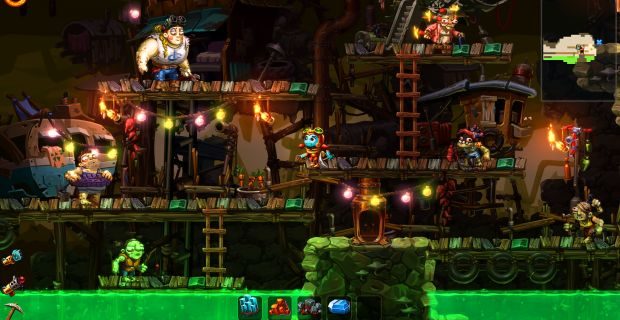 I like Spelunky, but I’ve always found it hard to get any prolonged satisfaction from it. It’s difficult, you die quickly, and then everything is different. Although Graham might bury me alive for saying so, it always feels like too much of a throwaway adventure. Steamworld Dig 2 feels like the antidote to that. It doesn’t demand a disproportionate slice of time, but it doesn’t kill you at the drop of a pug either. There’s balance and moderation in these mines – a bit of danger in the burrowing snails and fire-throwing cultists, but safety in a staggered network of fast-travel tubes. If you are crushed by a falling boulder, there’s no game over, just a loss of some gems you would have traded for cash. No worries.

It’s not going to surprise you with revolutionary ideas or mechanics, although it never intends to do so. It’s just an affable, traditional and pleasant videogame. What’s the word I’m looking for? Ah yes. Wholesome. It’s like some hot soup on a cold day. Except you dip your bread with a hookshot, instead of a hand.