If you click on a link and make a purchase we may receive a small commission. Read our editorial policy.
Developer: Image & Form Games
Publisher: Thunderful

Image & Form have jumped from one genre to the next during their twenty-odd-year history, but they've done it with such confidence and consistent brilliance that I was fully expecting to fall head over heels with their new card-based RPG, SteamWorld Quest: The Hand of Gilgamech. And yet, there was a time when Quest almost lost me. As I kept playing the same bunch of cards against the same bunch of enemies, I started to despair. Had SteamWorld's magic finally run out? Then I discovered twin hero bots Tarah and Thayne, and all was right with the world again.

Tarah and Thayne are brilliant. These purple, rabbit-eared siblings are the last of SteamWorld Quest's five (or should that be six?) heroes you'll meet during this 15-20 hour adventure, but man alive are they worth the wait. For me, these two devious souls are the perfect embodiment of what makes SteamWorld Quest such a rewarding and fiendishly engaging little card battler. 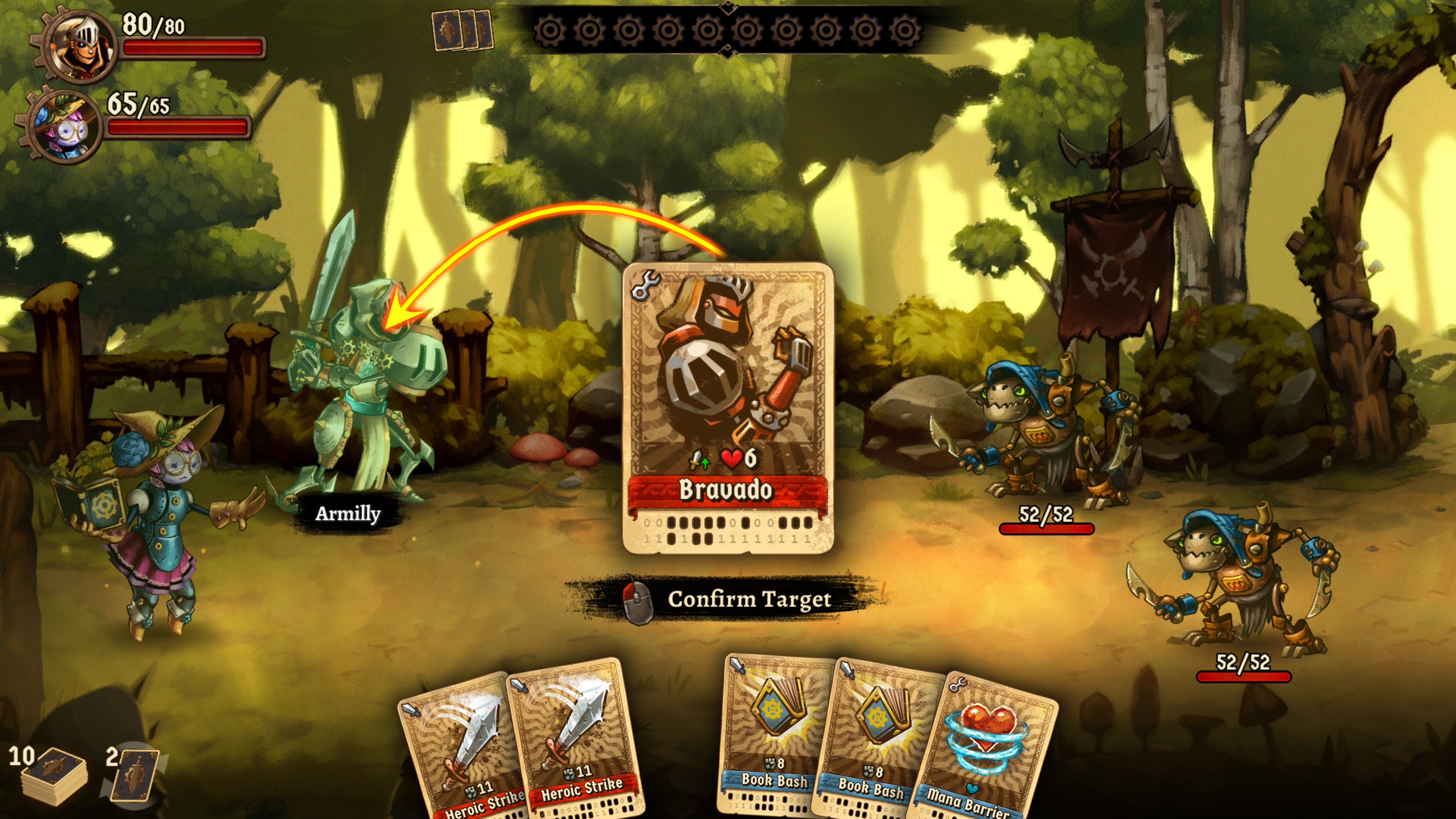 Each hero comes with their own deck of cards, you see, and much like the character decks you'll find in Slay the Spire, they all have their own strengths and weaknesses. Main hero Armilly, for example, is a hard-hitting knight, while the sagely Copernica deals in fire and ice magic. Hulking frog bot Galleo, on the other hand, is the group's main healer, while the foxy samurai Orik uses his cool, kabuki-style theatre masks to shift between different buffs and play styles while doling out fierce, katana-based lightning attacks.

Tarah and Thayne, however, are thieving orphans with a taste for both giant axes and dark, arcane magic, and you can tailor their deck to suit either trait or dabble in a bit of both. They're a highly flexible and nuanced pair of fighters, sapping the strength of others to bolster their own while also playing off other members of your party to enhance their attacks even further. By the time I neared the end of the game, they were the glue that held my team together, and I'm not sure I would have made it to the final boss without them.

Not that the game punishes you for falling in battle, though. If all your characters faint, you're simply plonked back at the nearest health-replenishing statue with all your accumulated experience, money and items still in tact. Nothing is ever lost in SteamWorld Quest, and its 'get up and try again' attitude encourages you to really dig into the ins and outs of the eight cards each character can take with them into battle and try out different combos. 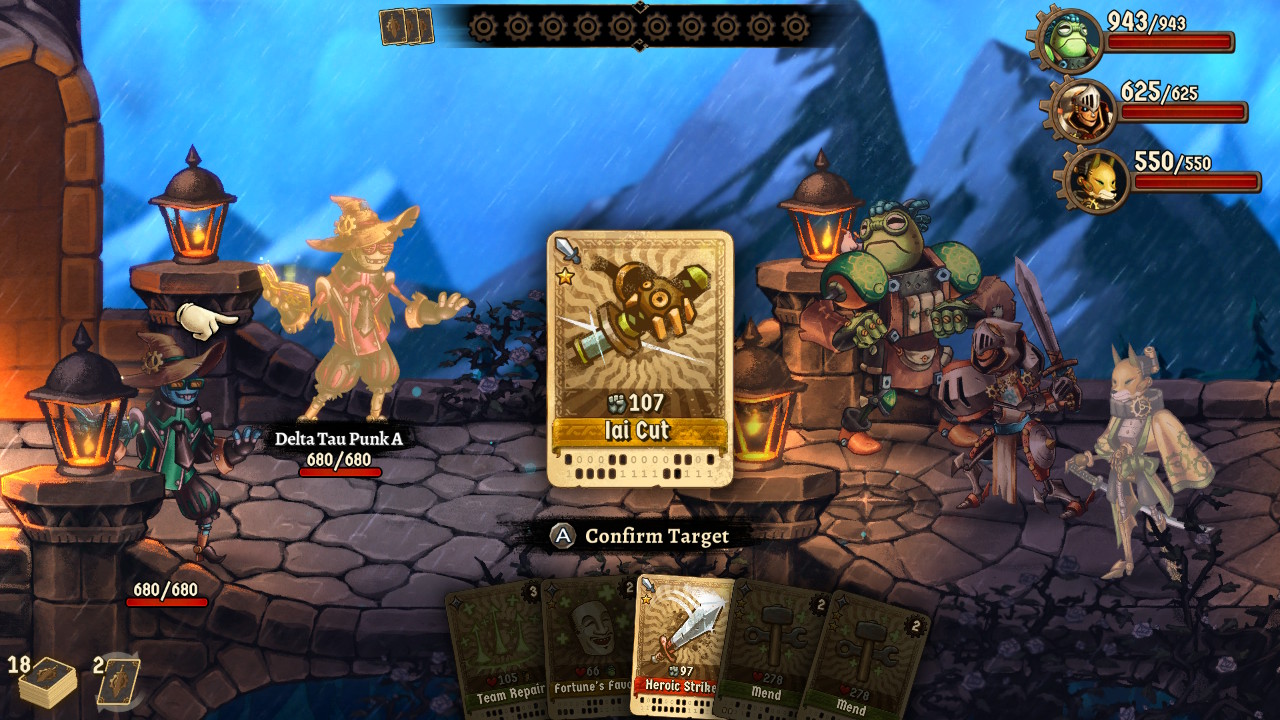 It's something I found myself doing on a fairly regular basis in the latter half of the game, as the sheer number of possible attacks were just too good not to experiment with. You'll constantly wish you had more than eight character cards most of the time, but this is precisely what gives SteamWorld Quest its drive and sense of balance.

Within those eight cards, for example, you'll need a decent mix of basic strike or upgrade cards in order to build up the requisite amount of 'Steam Pressure' (or SP) you'll need to activate your more powerful Skill cards. Everyone shares the same SP pool, too, so while you could theoretically overload one character with loads of top level 3-4 SP cards, you'll need another hero with enough non-SP-eating cards to actually make use of them, which really isn't any fun or indeed a very good strategy when there's so much variety to be found both within their individual decks and the way they overlap and interact with those of your other characters.

Play one of Armilly's cards directly before Tarah and Thayne's deadly Double Swing, for instance, and the twins will get an extra strength boost. Likewise, Galleo's Super Soaker ability will lower an enemy's ice and lightning defences, giving Orik the perfect opportunity to swoop in afterwards and take advantage of their newfound weaknesses. It's a wonderful melding of powers and unpredictability - especially when you can also redraw up to two cards per turn to either freshen up your hand or take a chance at getting an even better set of attacks - and it really feels like you're riffing off everyone's strengths as a team instead of simply playing them all in isolation like you would in, say, your average Final Fantasy game.

That said, there really is nothing more satisfying than playing three of one character's cards in a row and activating their special chain attack - the effect of which differs according to what type of weapon they've got equipped. Armilly's chain effect, for example, starts off with Lionheart, which heals her a bit while giving her an extra attack. But when I bought her a new sword that gave her the Lacerate ability, which is a lot weaker than Lionheart but deals Bleed damage for a number of turns, I was in love. Each hero only has three or four of these chain abilities to choose from over the course of the game, but there's a lot of joy and satisfaction to be found in running through these kind of mental gymnastics gauntlets, deciding when to deploy them in favour of a combo attack and vice-versa, and working out how your chain attacks can augment other cards elsewhere in your deck.

It's an ingenious and almost impossibly good system considering this is Image & Form's first outing with the genre, but it's also one I felt only truly came alive in the game's second half - around the time when Tarah and Thayne enter the picture. By then, you've got more cards at your disposal, more extensive combo opportunities, and the baddies you're delivering these kick-ass paper cuts to have finally started to evolve beyond the seemingly endless swathes of genero robo bees, hound guards and beaked mages that populate much of the game's early hours.

That's not to say the first half is duff, mind. The learning curve is steady throughout, the rate at which you acquire new cards either by crafting them at the item shop or finding them in hidden treasure chests is constant, and you're only ever a handful of chapters away from having a new hero join your ranks and figuring out what makes them tick. 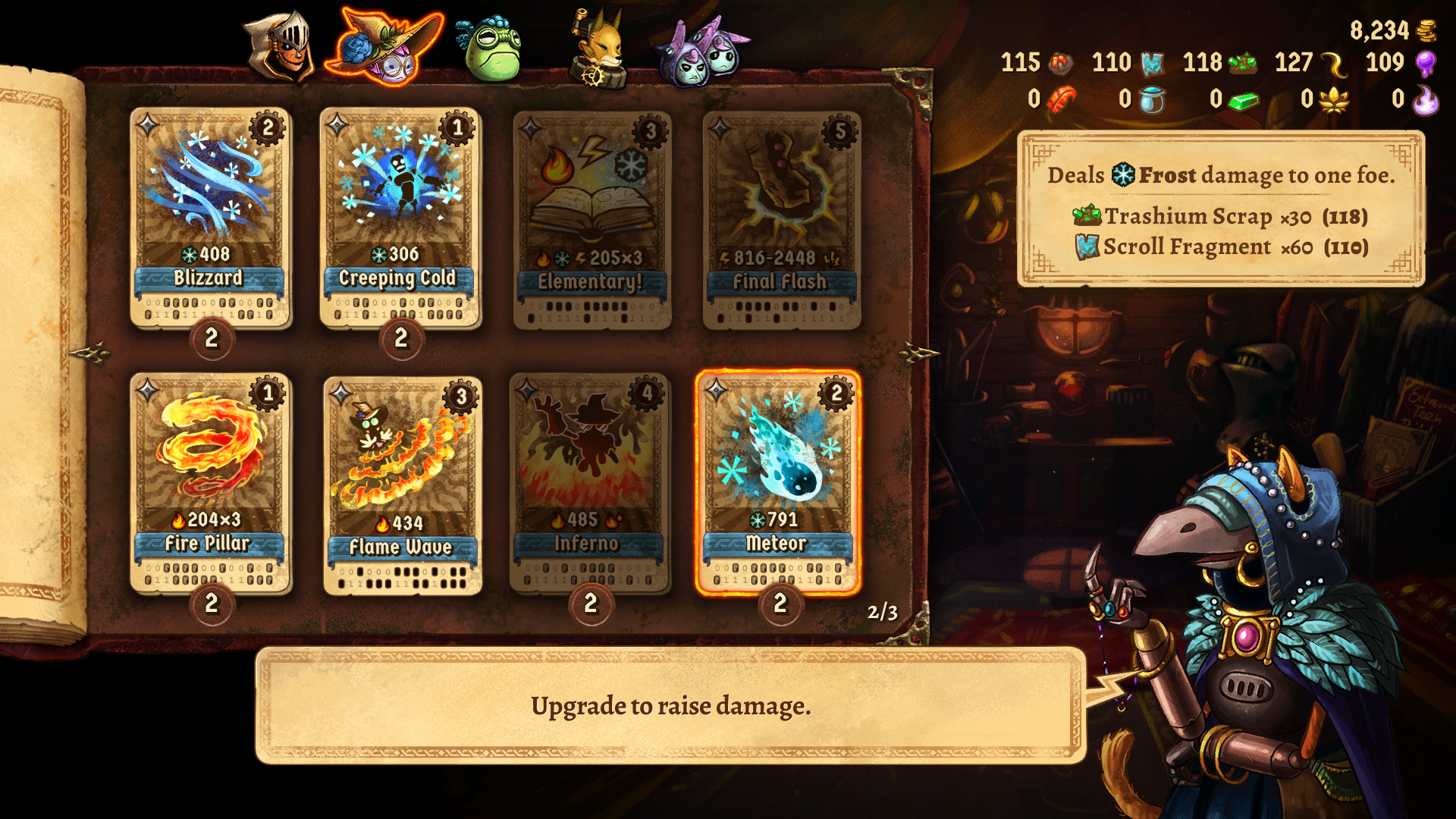 Indeed, my period of doubt probably only lasted a couple of chapters in total, but there's a string of them just before Orik arrives when you're running around a lot of very similar-looking interconnecting hallways fighting a lot of very similar-looking enemies with what feels like the same cards you've had for an eternity. Perhaps it was partly my own fault for not experimenting more with the cards I did have at my disposal, but when you've got a formula that works, especially against such a limited range of enemies, there's less incentive to mix things up.

In those moments, it started to feel like I'd reached the limit of what SteamWorld Quest had to offer. Whereas the excellent SteamWorld Heist had the thrill of procedurally generated space ships and real-time aiming to help keep you on your toes, Quest's fixed corridors and linear, turn-based combat can occasionally err on the mildly repetitive side.

As I said, all was forgiven once Tarah and Thayne pitched up (Orik did help, by the way, but the game's continued reliance on the same batch of enemy types did not), but there were still other little niggles that didn't quite sit right. I love the fact that there's a fast-forward button during fights, for instance, but I wish the Skip button during cutscenes put an end to the entire ream of admittedly quite well-written chat instead of simply moving onto the next line. Admittedly, this isn't a problem on your first playthrough, but if you want to go back and replay a chapter to get all the hidden treasure chests you missed then you'd better be prepared for a lot of tedious button mashing.

Likewise, the PC version's keyboard and mouse controls could do with a little refinement. Enter, for example, is the default key for interacting with objects and getting the jump on enemies when you approach from behind, while your mouse doubles up as a location pointer and another sort of interaction button. I say sort of, because unless your cursor is hovering over the precise enemy or object you want to chop, you'll just run to wherever you've clicked, resulting in lots of clumsy head bumps and sloppy approaches when I tried to sneak the first hit in. It's easily rectified by binding left click to Interact instead of Enter, but it nevertheless adds to some of those early pacing issues. 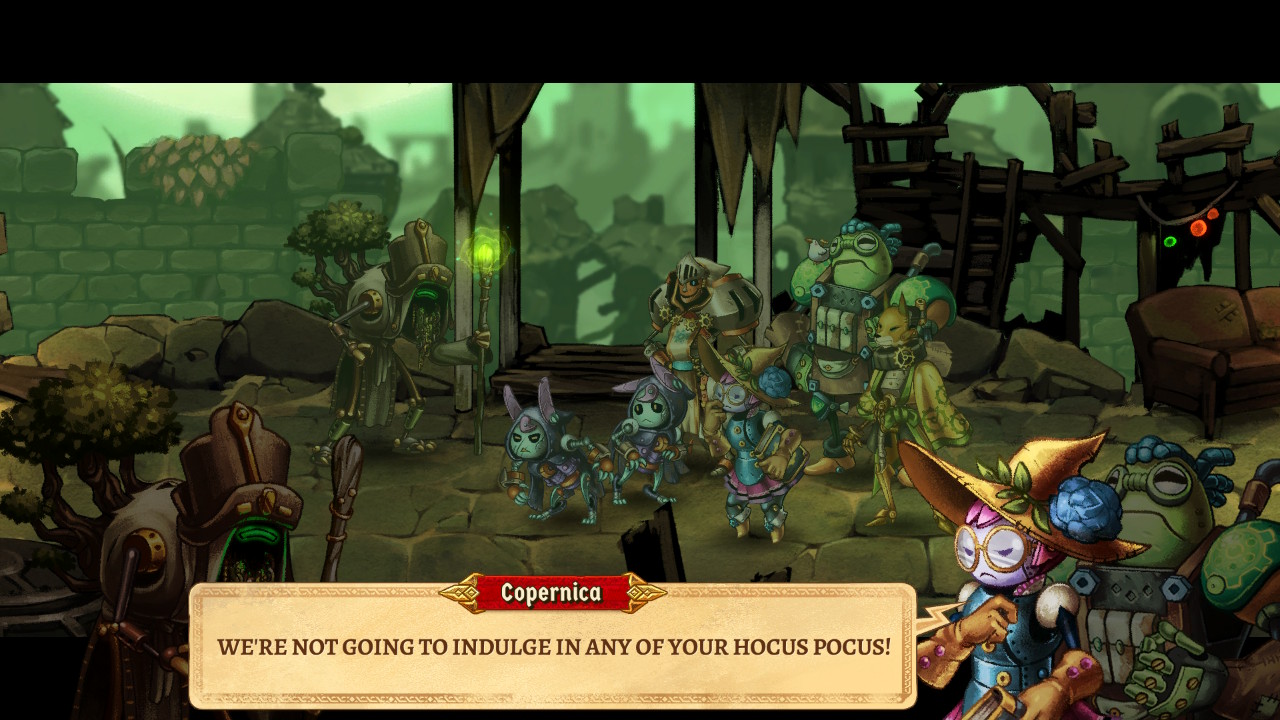 SteamWorld Quest isn't going to be the next Slay the Spire, and to be honest, die hard Spire-ites will probably find its one-and-done story a bit, well, restricting. But for card novices (which I count myself one of), it's still a real charmer, no matter how sluggish it might get in those early hours. There's so much heart in Image & Form's games, and SteamWorld Quest is no exception. When it's firing on all cylinders, there's really something quite enchanting about this robo card battler, and the way each card fits together makes you feel like a wizard in return, as if you've glimpsed behind the magician's curtain and suddenly cracked their trick's inner workings. It may not be quite as flawless a performance as their peerless SteamWorld Heist, but by the end it still left me well and truly spellbound.