Tacoma is… a beautifully designed lift-the-flap book for grownups? An interactive theatrical novella set somewhere between now and a far-future cyberpunk dystopia? A mysterious soap opera? A snoop-sim? A basket of Easter eggs being used to make a sci-fi omelette? I found it to be a rewarding, tightly edited mix of all of the above, but you probably want to know a bit more so here's Wot I Think...

Tacoma puts you in the role of Amy Ferrier, a subcontractor boarding the deserted space station, Tacoma. Your official job – the one you're contracted for – is to retrieve ODIN, the station's artificial intelligence, for the Venturis Corporation. But while you wait for the file transfers you pick through recordings of life on board, getting to know the crew and uncovering the story of what happened to them. 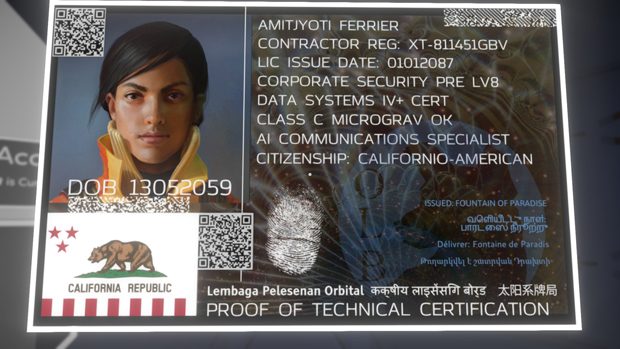 The majority of the game revolves around these recordings, where augmented reality projections of the crew's bodies bustle around you. You can listen to what they say, access emails and chats when they open their personal terminals, and follow different groupings of people to get a sense of the personal relationships at play. Rather than being pressured to make a choice as to who you follow, as is the case in immersive theatre, you can scrub backwards and forwards through the timeline of a recording, resetting it so as to pick up other storylines or repeating sections if you weren't listening because you got distracted by e.g. trying to play pool using apples (you can't) or writing "bees are cool" in paper letters on the wall (you can!). 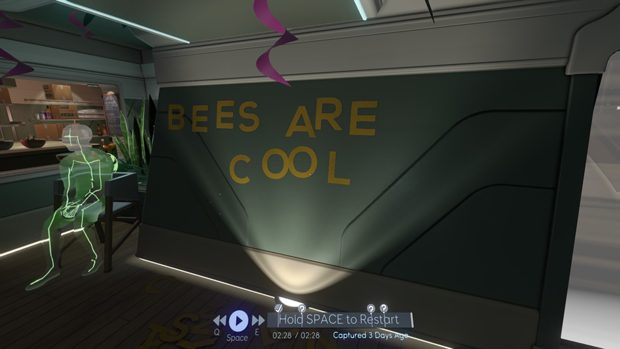 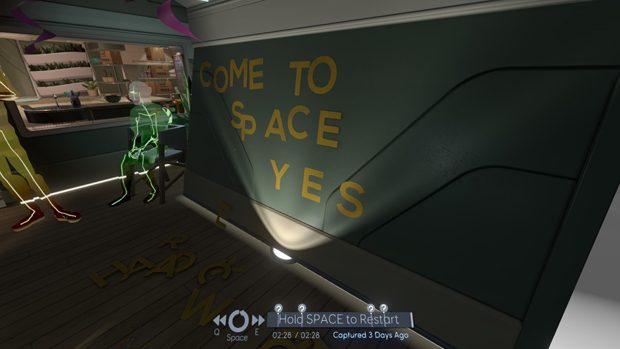 The only thing gating your progress through the space station as Amy is the AI file transfers which you set up as you access a section of the space station. The transfers are too slow for you to want to wait them out which is the game's way of inviting you to find a way to use that time, digging into the lives of the crew. The depth you choose to go into is up to you. I think you could even choose to stand by the AI access panel for the whole time, twiddling your thumbs, although that makes the transfer happen at a snail's pace. Accessing the crew data makes the process happen faster and, I think, if you've accessed all the logs in all the recordings the transfer reaches 100% so you're not hanging around.

Progress is linear through the different elements of the station but in each section there's a lot of leeway for you to guide your own exploration. I roamed everywhere and drank in as much information as I could.

I stalked the crew, I got to know their personalities, their preferences, their worries, their cat (who has a magnificent name and is as sleepy as the cats I've known in real life), their personal quarters… I rifled through drawers as their insubstantial bodily projections chatted mere feet away, I fleshed out my understanding of Venturis, of AI hierarchies, of employment histories. 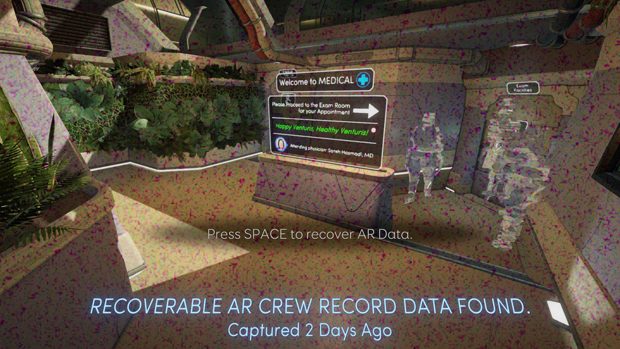 I don't want to give away too much of what I worked out but I will say that I found the game's setting and the roles of companies to be an interesting extrapolation. It's not as extreme as typical cyberpunk – maybe it's medium-term cyberpunk? – but it extends the idea of jealous megacorporations which want to keep users within branded ecosystems from Facebook (and others') digital landgrabs/content grabs of the present and fleshes them out for the future.

As someone who traditionally gets bored scraping data logs to reach 100% (I still haven't read all the Destiny grimoire cards, and if a game tries to reward me with lore entries I will purposely ignore that entire tab of the interface) Tacoma was a refreshing change. Each snippet was short enough that I didn't get bored, plus a lot of the data is corrupted or inaccessible, so when a personal info terminal gives you four icons to click on, often at least one is inaccessible, and the others are either short or corrupted into static or gibberish at points which leaves you free to skim for detail or to absorb them in short bursts rather than have entire chapters to stare at on a screen. 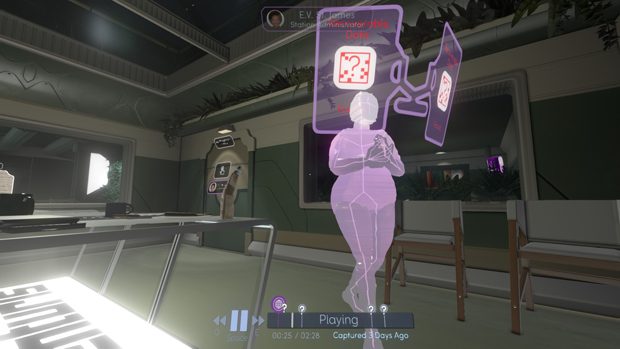 A particular source of joy was the personal quarters for each crew member. As well as helping build up their characters through distinctive knick-knacks and selections of books, they also helped underline connections with other crew members. An orchid grown by the botanist adorned a table in someone else's room – the sole member of the Tacoma who took him up on his offer when he had spare plants to gift. It also helped round out the elements of the characters which wouldn't have come up in general ship-related conversation, like individual faith or a character's insecurity over a specific personality trait. The latter gave me an endearing laugh-out-loud moment pretty early on.

Something I really appreciated was the individuality of each crew member. Probably the most immediately obvious thing is the diversity of body shape. The game doesn't make a big song and dance about it, it's more that it's noticeable in a gaming landscape which tends towards a generic/idealised basic shape. These seemed like humans rather than generic game avatars. But beyond that there are also a range of relationships, family dynamics, faiths and personal struggles or ambitions. The more I speak to anyone, the more I find out that they have their own problems, heartbreaks and happinesses to navigate and it's so nice to see that reflected in what you find out on Tacoma rather than a bunch of archetypes. 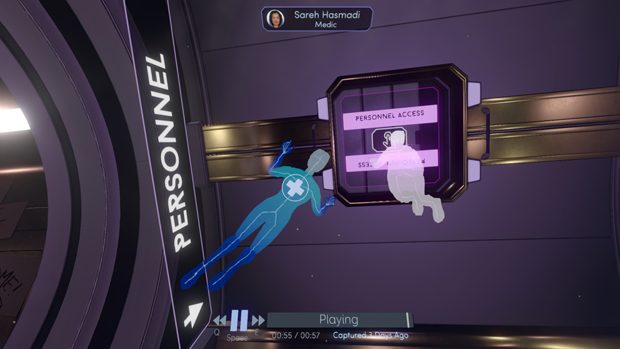 The amount of detail for each object and each surface is amazing too. Meal packets have dietary information, there's a favourite pop group whose merchandise has been imagined and designed, there's a crossword, different shaped mugs have left different shaped coffee rings, the neck of a drinks pouch will flop according to the station's gravity as you turn it in your hand... There's repetition, sure, but it makes sense aboard a space station where items would be ordered in bulk. Oh, and I don't think I've ever seen hair elastics in a game before! 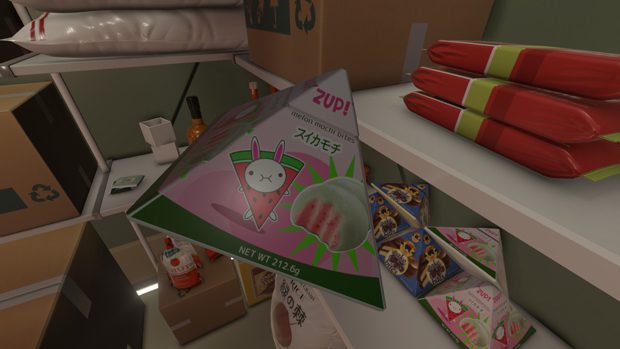 The meat of the game is the puzzle of what happened to the crew, which I think you'll always uncover, but your degree of snooping will determine the amount of context and extra information you have. Otherwise it's more of an experiential project with a few puzzle-y bits, like figuring out a handful of passcodes or finding a key to unlock a drawer or a door.

As with Fullbright's previous game, Gone Home, Tacoma won't be for everyone, but it's a masterclass in environmental and gradual storytelling. It weaves an intriguing story against the backdrop of a believable near-future culture. I think its linearity combined with my extensive exploration means I won't replay it unless I suddenly think of a question I want answered or until I've forgotten a sufficient amount that it feels like a new discovery. But that's not a criticism. I got everything I wanted from that playthrough and I loved it.