Fancy a trip to the park? Massively multiplayer catch 'em up TemTem certainly hopes so, dropping update 0.5.12 this week. The headline attraction is the Saipark, a natural reserve located near the Prasine coast in Deniz. Opening its doors to experienced trainers, the Saipark offers a rotating collection of extra-special pocket monsters each week, for a modest price

Saipark works on a weekly rota, headlining two species of Tem. Unlike their counterparts in the outside world, catching these Tems within the park's walls will come with special bonuses - an increased chance of being "Luma" (a rare, alternate visual style), spawning with special "egg moves" or coming with a higher minimum SV value.

Developers Crema plan to put out an infographic like this one each week, revealing the Saipark's two bonus Tem and the cost-of-entry. Right now the devs are working on getting this info into the game proper - 'til then, keep an eye on their social channels for weekly updates. 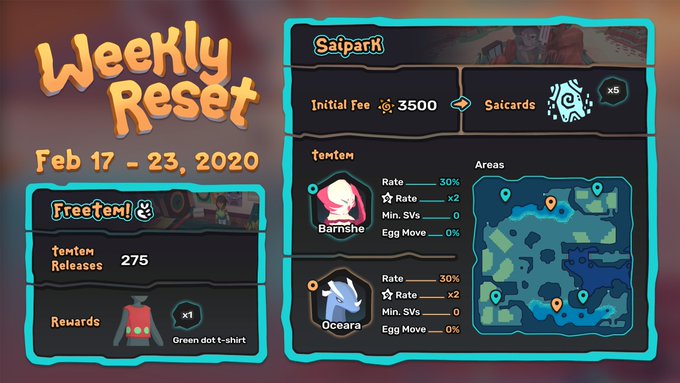 See, you've gotta shell out to get into the park. You also can't use regular Temcards (Temtem's Pokeball equivalent) in the park, but your initial entry fee will get you five special Saicards. These have a higher capture success rate than regular cards, can only be used in the park, and expire each week. You can pick up more if you're in a grindin' mood, but an exponentially rising cost makes that a pricey proposition.

The cost to get into the park isn't set in stone, though. Crema will raise or lower the fee, depending on how rare the week's Tems are. It does seem that there was a bug with pricing early on, one that saw the devs refund players and void cards bought at the erroneous price.

As per any patch, update 0.5.12 comes with the regular rundown of bug fixes and balance changes. Status animations have been sped up, and Crema have fixed a number of situations where players could get stuck in world geometry or dialogue boxes. More changes, and more deets on the Saipark's grand opening, can be found over on Temtem's official patch notes.