Hey everyone, look. The creators of The Beginner’s Guide have made a new game. I wonder what emotional masterpiece they’ve made this time? Let’s go take a lo-- oh. It’s an RPGMaker game about Keanu Reeves indiscriminately stabbing people. Well, you know, maybe there’s a hidden message. A deep satire on the state of the videogames industry. A worthy soliloquy hidden in the dialogue. Perhaps there’s some understanding of the human condition to be gleaned from…

No. No, it’s just a rando JRPG about Keanu Reeves dealing drugs to children.

This game, which is called Absolutely: A True Crime Story, leaves my sense of news values all borked. On the one hand, it’s a creation by two noted developers (Wreden previously worked on The Stanley Parable, while Roth has contributed to the likes of Starseed Pilgrim and The Yawhg). On the other hand, it’s made entirely with the most clichéd free assets that RPGMaker has to offer, and thus looks like it has passed through the bowel of a Final Fantasy monster. But back on the first hand, it is pretty funny. But back on the other hand, it reads like two children were writing the same story by fighting to the death inside a Google Doc. In other words, my hands are full. 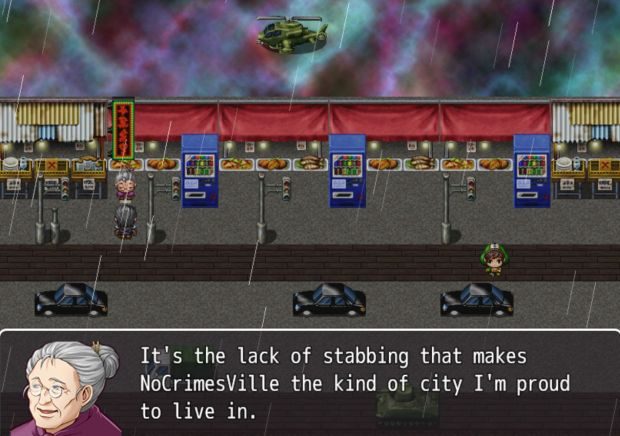 Maybe you should just go play it. It takes five minutes and focuses on the arrest of action hero and guitar god Keanu Reeves. This is an event that, for legal reasons, I must say did not occur. I repeat, Keanu Reeves did not assault 15 people in a Sears department store.

Play it, laugh at least one time, throw it away over your shoulder into a pile of skeletal game remains. That is how we treat videogames here at RPS. They are naught but snacks for our attention span.