The NATO peacekeepers might have failed to keep the peace in make-believe Gulf state, Qatab, but judging by the comments generated by my daily sitreps during the past three weeks, they did manage to keep some of you entertained and on the edge of your seats, so perhaps their deployment wasn't a complete waste of time. Yesterday morning, dislodged by the shockwave from an exploding T-72, the curtain fell on “Quitting Qatab”, this year's experiment in co-op Combat Mission. All that remains to be done is for me to thank everyone who participated or cheered us on, dish out decorations, and decide whether the Comment Commanders won or lost.

Before I can do the latter, some loose ends need to be tied up. With hindsight I should have kept a few turns in reserve for resolving unresolved situations. The scenario's hard 20-turn time limit means I've no option but to rely on imagination and educated guesses to figure out what happened to the 23 friendlies still in Al Rayman at the close of play (the object of the scenario was to exit all personnel through the eastern map edge). 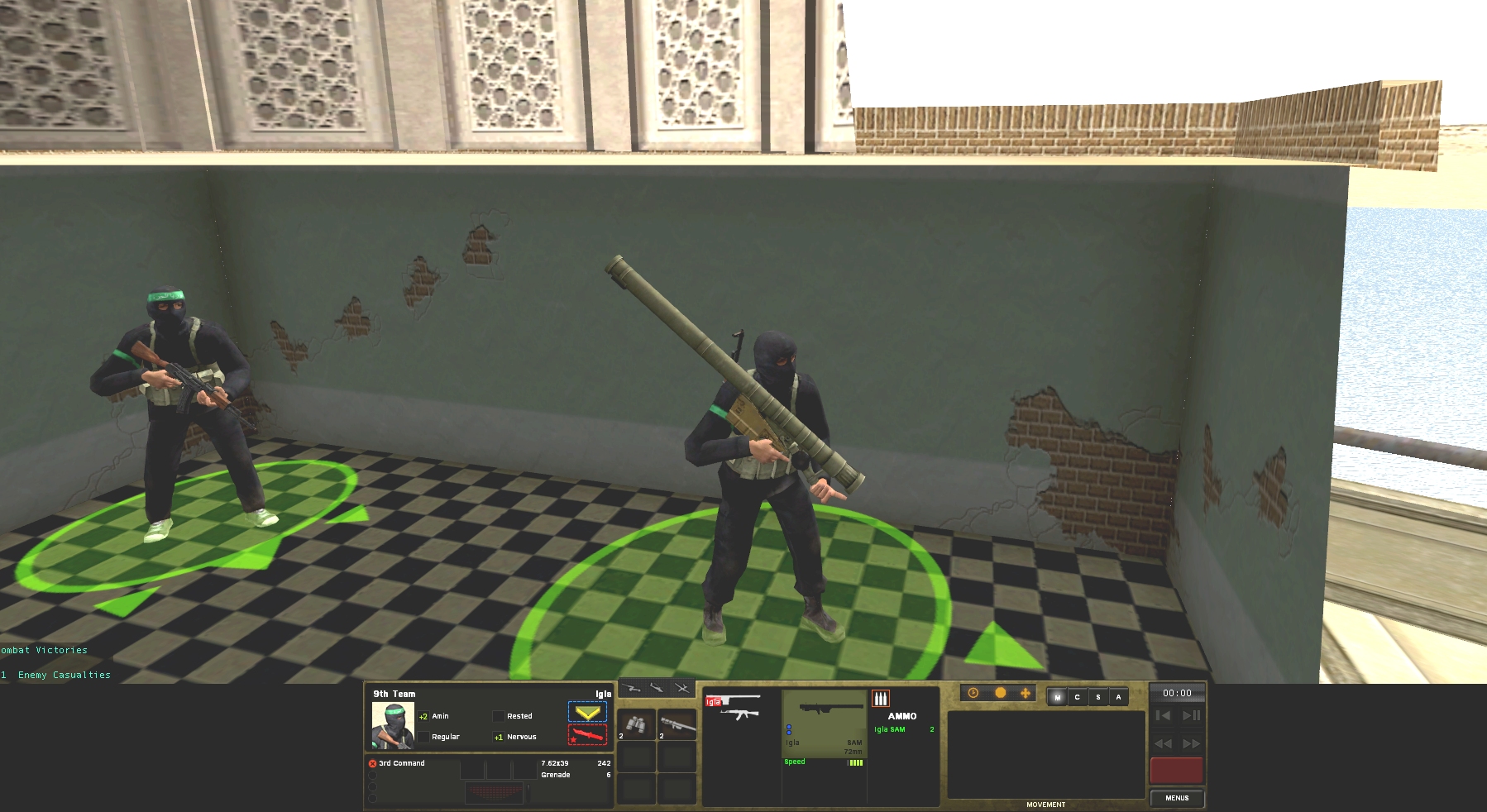 Using AAV (Ale-Aided Visualisation) I've come up with two versions of turns 21 and 22. The first is bleak and involves a lighthouse keeper with an Igla* and a barnacled naval mine left over from the 1987-89 Qatab-Qatan conflict. The second is more optimistic and, to be honest, more plausible. As I've no wish to get lynched, it will be version 2 that I relate here and use as the basis of my scoring.

* Somehow the plane swotters pictured above got through Chally's lighthouse bombardment without a scratch. 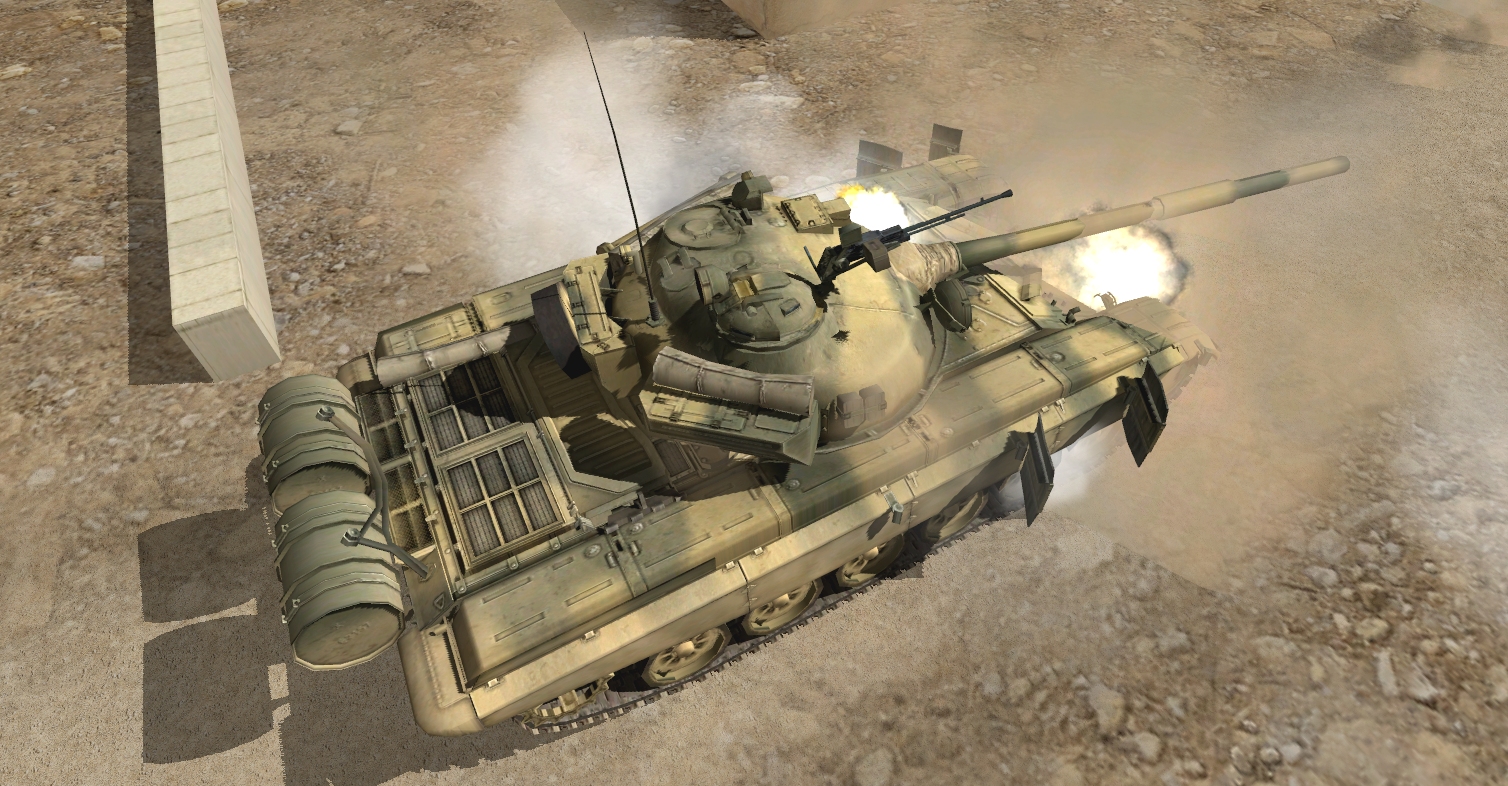 Satisfied the eastern T-72 no longer poses a risk, Quidditch Five Zero switches its attention to the one at redf73 early in turn 21. Its Hellfires and rockets* exhausted, our heaven-sent hoverer uses its chin-mounted chaingun for this attack. Although the torrents of 30mm HEDP fail to penetrate the squat Qat machine, they do shatter vision blocks and crew resolve. The badly pitted T-72 is last seen reversing towards the park behind a pall of self-sown smoke.

* These were expended before the Apache arrived at Al Rayman

While Quidditch is quelling, the Marines of 2nd Squad are crafting crude stretchers from oars and sheets. When they finally depart for the beach, Gonzales' men are carrying both their former leader, Mortensen, and the comrade who's been quietly bleeding out in a house one door down since getting hit during the pacification of the beachhouse.

Extricator has disappeared into the fog bank by the time exhausted 2nd Squad join the Jav team and Willy's forlorn driver inside Swamp Thing.

Swampy's passengers have no need of their weapons during turn 22, but their helmets come in handy. By T+50 the men in the back of the AAV are bailing brine furiously.

The leaks are the work of a sea-bathing/lead-loosing BTR that looks to be heading for South Beach when our AAV encounters it. For around 20 seconds narrow- and broadsides are traded, then an expertly lobbed 40mm grenade holes the enemy amphibian below the waterline and Swamp Thing is able to proceed in peace.

^ The red dots indicate peacekeepers lost during the evacuation

Swamp Thing's exit brings the total of evacuated peacekeepers to 46. Roughly 58% of the NATO soldiers that started the scenario in Qatab got out of the country alive. Consulting my crude bespoke scoring system  - a scoring system in which every evacuee is worth one point...

...that 46 equates to "PASSABLE". Modifiers alter the score a little...

...but not the assessment. It's official - the Comment Commanders can be fairly proud of what they achieved in Al Rayman.

Touring the town after Swamp Thing has been swallowed by the fog bank and Quidditch Five Zero has turned for home, the following vistas and units catch my eye. 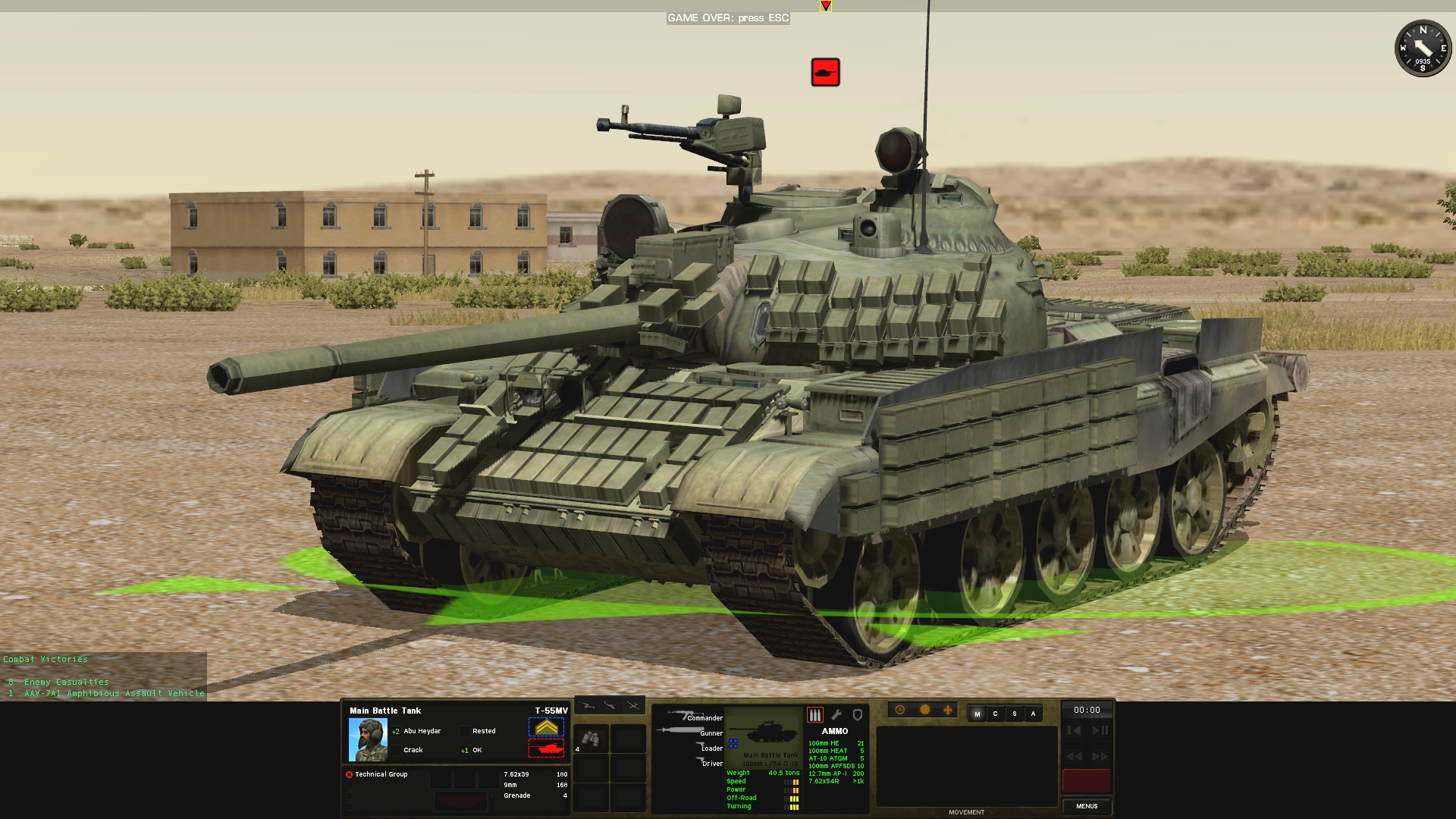 This T-55 is the unit responsible for almost half of our casualties. On paper the least dangerous MBT fielded by the foe, its one and only contribution (?) wrecked Bayou Belle, slaying many of her passengers. The handful of 1st Squad soldiers who survived the tank's rooftop-grazing, river-crossing killshot were mercilessly cut down by advancing infantry as they bailed. If the sly green trundler had positioned itself on the coast during the closing phase of the battle rather than lingering ineffectually at redn17, it might have bagged other AAVs.

The T-62's timidity in the latter stages is more understandable/excusable. Having survived two near-death experiences during the first two turns (Javelinned in turn 1. LAWed in turn 2) and witnessed IFVs getting ripped apart by the come-and-have-a-go-if-you-think-you're-hard-enough Challenger in 7 and 12, it's little wonder the traumatised, track-damaged T-62 chose to clock-watch by the bridge until the imperialists had departed.

Much of the Qatabi bood spilt during the scenario was spilt here. Pushing north-westward from its bosky deployment position, 'Park Force' was stopped at the Ditch o' Doom by the combined firepower of several AAVs, 2nd Squad, the machinegunners of 4th Squad, and various other NATO units. The roadside trench that would, in other circumstances, have protected them ended up worsening their predicament. The red lines in the tree-free pic above, show the final resting places of sixteen enemy fighters.

An after-action inspection of the marketplace reveals no obvious recipients for Quidditch's first Hellfire. If our Apache was attempting to top the taxi-men who almost wiped-out Stone's sharpshooters in turn 9, then the shot was an extremely poor one.

I really can't decide which of the following units should take home the prestigious Unit of the Unpleasantness trophy, so I'm going to leave it up to you. Votes in the comments section, please (feel free to nominate units not in the list).

A. Our Javelin Team. Where would we have been without Yuen and his assistant? Yes, they narrowly missed the marketplace T-62 in turn 1 and failed to KO the reversing T-72 in turn 19, but the pacification of Pelican Point was entirely their doing.

B. 2nd Squad. Forced to shoulder most of our infantry duties by the early demise of 1st Squad, 2nd Squad trashed one T-72 and temporarily terrified another, organised two rearguards, and survived, largely unscathed, multiple RPG attacks while making for South Beach. Because a portion of the unit exited the map prior to turn 20, I can't tell you exactly how many enemies fell to their hardworking M16A4s and M249s, but suspect it was around half-a-dozen. Generally, they pinned and anchored while other units took the scalps and grabbed the glory.

C. The Ditch o' Doom AT man. This valourous Vampir user kept his head when all around were losing theirs, sometimes literally. Deluded Deathproof was demolished by one of his 105mm rocket-propelled grenades and, but for a tiny aiming error, InstiGator would have suffered a similar fate seconds later. In a parallel universe he got that second KO, and, in the resulting confusion, retreated back to the park to prepare new surprises.

D. Extricator né Deviator né InstiGator. Unquestionably our luckiest unit (she cheated death-by-HEAT-warhead in three separate turns) our HQ AAV can convincingly claim to have been our most valuable one too. The eleven enemies she felled with MG and grenade launcher while loitering next to Racecourse House, finished Park Force as a serious threat, and her daring rescue of the Dutch pilot had huge repercussions for the end game. Without the Dutchman acting as JTAC, Quidditch's spectacular entrance would have been delayed by at least two minutes and we might have lost 2nd Squad, another AAV, and the entire shooting match as a result.