Playing Katamari Damacy Reroll can be a lot more unwieldy than you’d expect. But then using both analogue sticks to move and steer your katamari makes sense because it sort of represents the arms of your little prince who’s pushing this katamari in front of him, which gets bigger and bigger the more objects he rolls up. It’d make sense for it to feel unwieldy, wouldn’t it?

And when you can roll up literally anything that’s the same size as your katamari currently is, including a big-ass sign that’s jutting out of your side, well, it’s going to get awkwardly bumpy.


On top of that, you always have a set diameter to meet, as well as a time limit to achieve it in, both of these mandated by The King of the Cosmos at the start. The time limit sounds quite generous at first until you realise you’ve got quite a lot that needs rolling up. The urgency really ramps up when sirens start blaring for the last 30 seconds. The King of All Cosmos can’t be expected to wait. 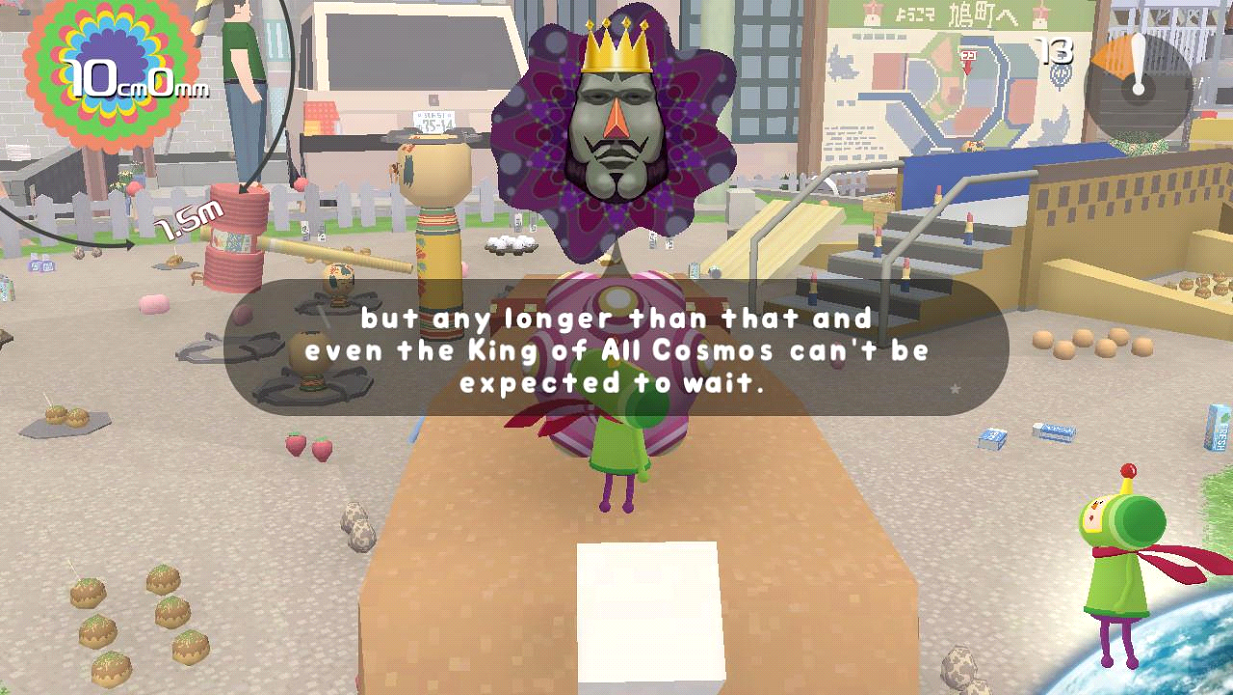 This archaic arcade system, and the risk of failure that can leave your prince looking even smaller to an easily disappointed (and frankly, lousy) father, somewhat flies in the face of the kind of artsy, quirky games we see today - think Journey, Gris, or modern Katamari-like Donut County, which are all more about letting you experience emotions or story with minimal input.

That’s because Katamari Damacy Reroll is a remaster of a 14 year old game, not a new one. Failing to please the King is an important part of how you come to enjoy the game - hell, he’s barely satisfied even when you do meet the criteria.

While I’d stop short of saying it’s secretly a game to git gud at, that peculiarly unwieldy control system is something you learn to appreciate the more you master its bumpy nuances. It makes sense that you can’t roll up larger objects than yourself, and when a pesky larger animal or vehicle charges and sends you flying off course, they’re kind of jerks for doing it. But that just makes things all the sweeter when you come rolling back when you’re the size of a house, and stick them to you like there’s nothing to it.

It’s easy to assume that a casual experience equates to coddling with training wheels. There's a moment in Gris when you’re being chased by a huge monster, but the whole sequence is just played out for you, and it makes the peril a bit toothless. That Katamari allows you to fail because of its old-school mentality is kind of refreshing.

Sure, it can feel deflating to have rolled around for 20 minutes, only to find you’re short of the target by a metre, but when a world is this charming, with the catchiest soundtrack to match, there’s nothing like trying again. Because as wonderful as all the other weird stuff is, mastering the mechanics is the greatest part of the pleasure. Plus, when you finally manage to elicit genuine praise from that egocentric King, it feels kind of worth it.