If you click on a link and make a purchase we may receive a small commission. Read our editorial policy.
Developer: Namco
Publisher: Bandai Namco

There's a reasonably good chance you don't need me to explain Katamari Damacy. Although, like me you may never have played the original game in the series fourteen years ago. Now 2004's sleeper hit, in which you roll a ball around gathering up stuff, has been refreshed, and for the first time is coming to PC. And it's still absolutely bloody marvellous. 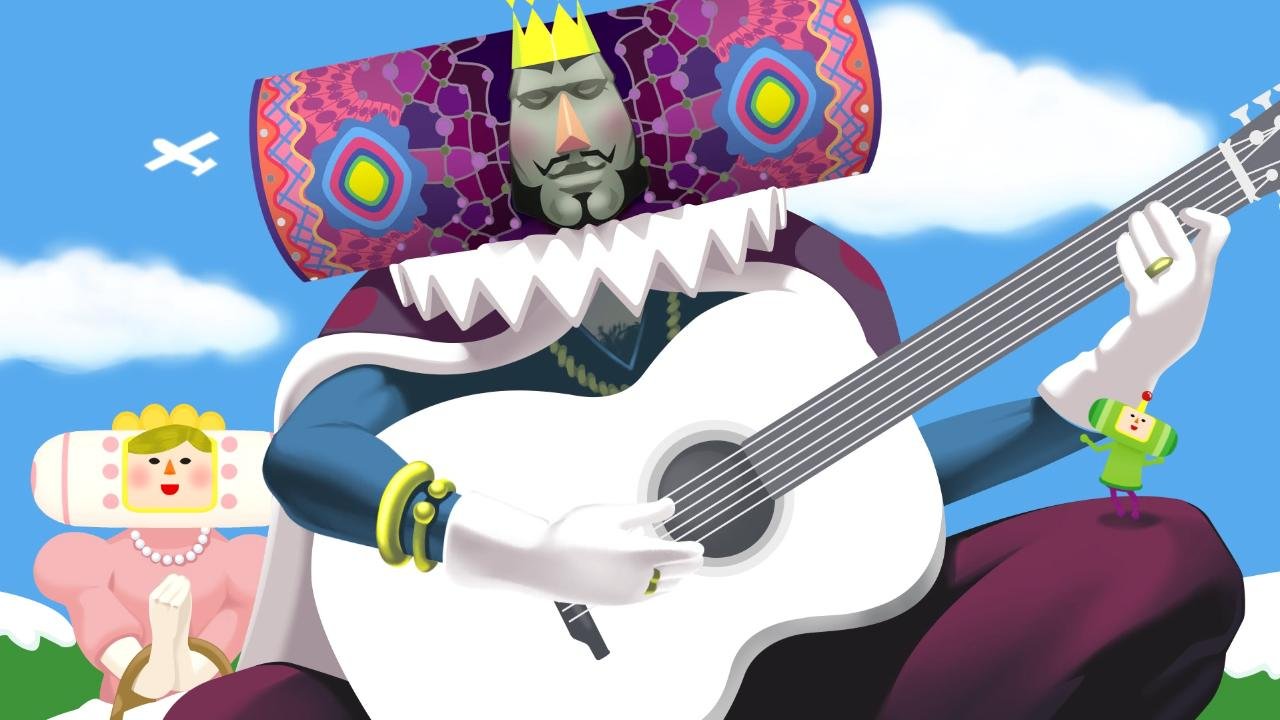 I looked it up. Apparently "Katamari Damacy" translates to Clump Spirit. Which works. This was the PS2 classic in which you rolled about a magical sticky ball (the Katamari) that gathered up objects small enough to attach to its outside surface. The more you gather, the larger the surface, the larger the objects you can pick up. Beautiful, simple concept, delivered with a deftness that belied the tech and time.

Doing more with the PlayStation 2 than perhaps should have been possible, it allowed you to start off centimetres small gathering up stationary detritus, then in the same level be 300m tall, ripping up skyscrapers and the very land itself. Outstanding amounts of detail, literally thousands of object types, so many of them animated (even the traditionally inanimate), reacting with physics, and more importantly, sounds. A time limit is set, a size of Katamari ball demanded, and you were off to quite leisurely enjoy the utterly daft experience of rolling and growing.

But more than that, more than just a great game concept, was how totally handbag-full-of-lizards batshit strangely it did everything. And let's drop this past tense, because this is the exact same game with modestly improved detail, set to work on a modern machine. It's important not to forget that this is one damned weird game. 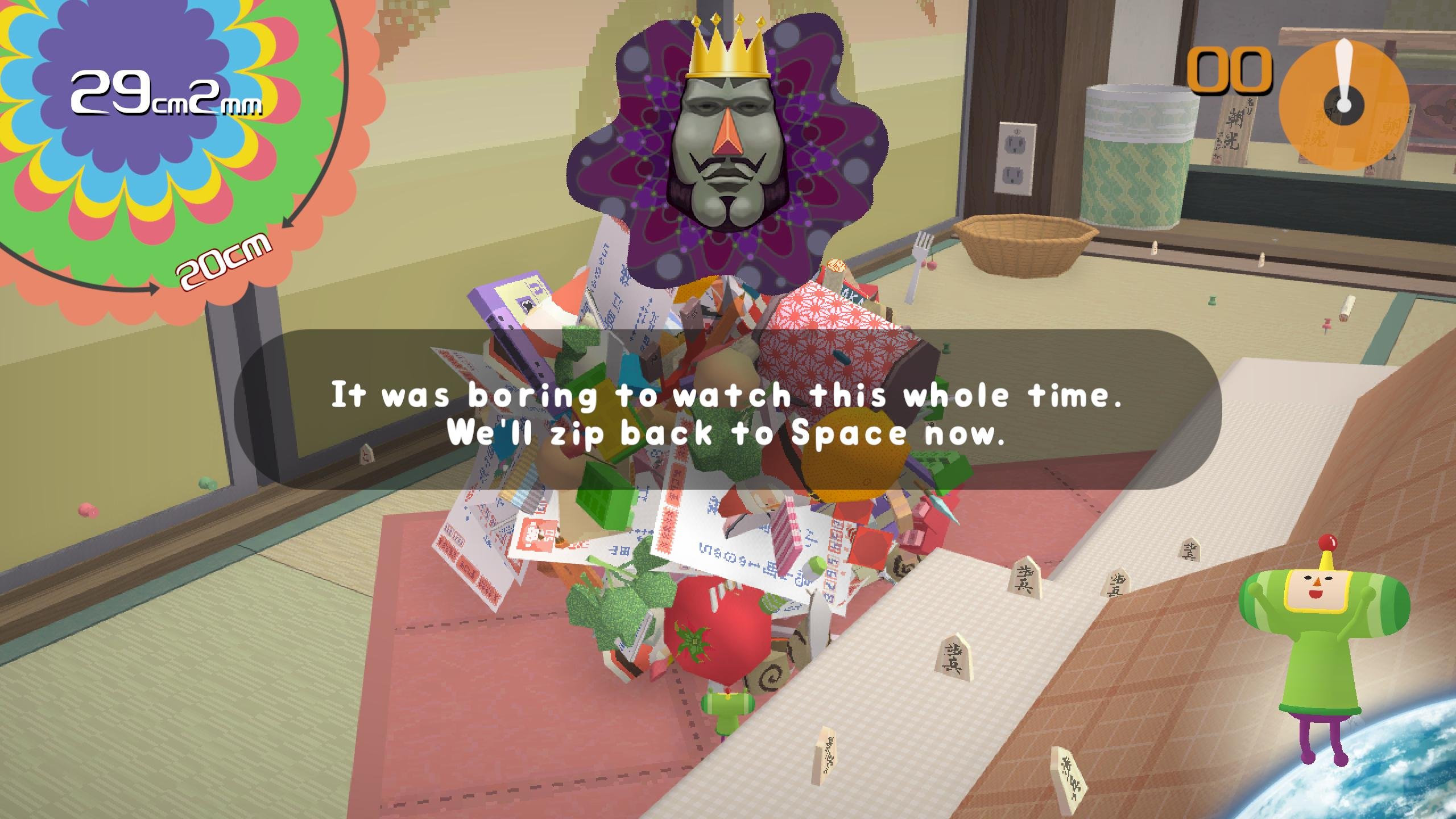 A carpet-headed space king who wears trousers to show off his willy, and who speaks in record scratches, has gotten unpleasantly drunk and destroyed the night sky as viewed from Earth. So rather than fix it, he demands that you - his pint-sized son, the Prince - must put it all right by gathering up absolutely anything from the Earth and then firing it into space to replace the missing constellations. Yeah. And he does this in a really nasty way, constantly berating you not just for your progress, but also for your size as a character. He's a proper dickhead. Dickcarpethead. And then he takes the credit for it.

Meanwhile! Meanwhile there's a Japanese family - a mother, daughter and son - who are on their way to see their astronaut father fly to the moon. In tiny scenes between levels, we see the children protesting to their disbelieving mother that something odd is happening to the stars, eventually convincing her when their father points out his trip is off because, well, the moon's gone missing. The ending is even sillier. 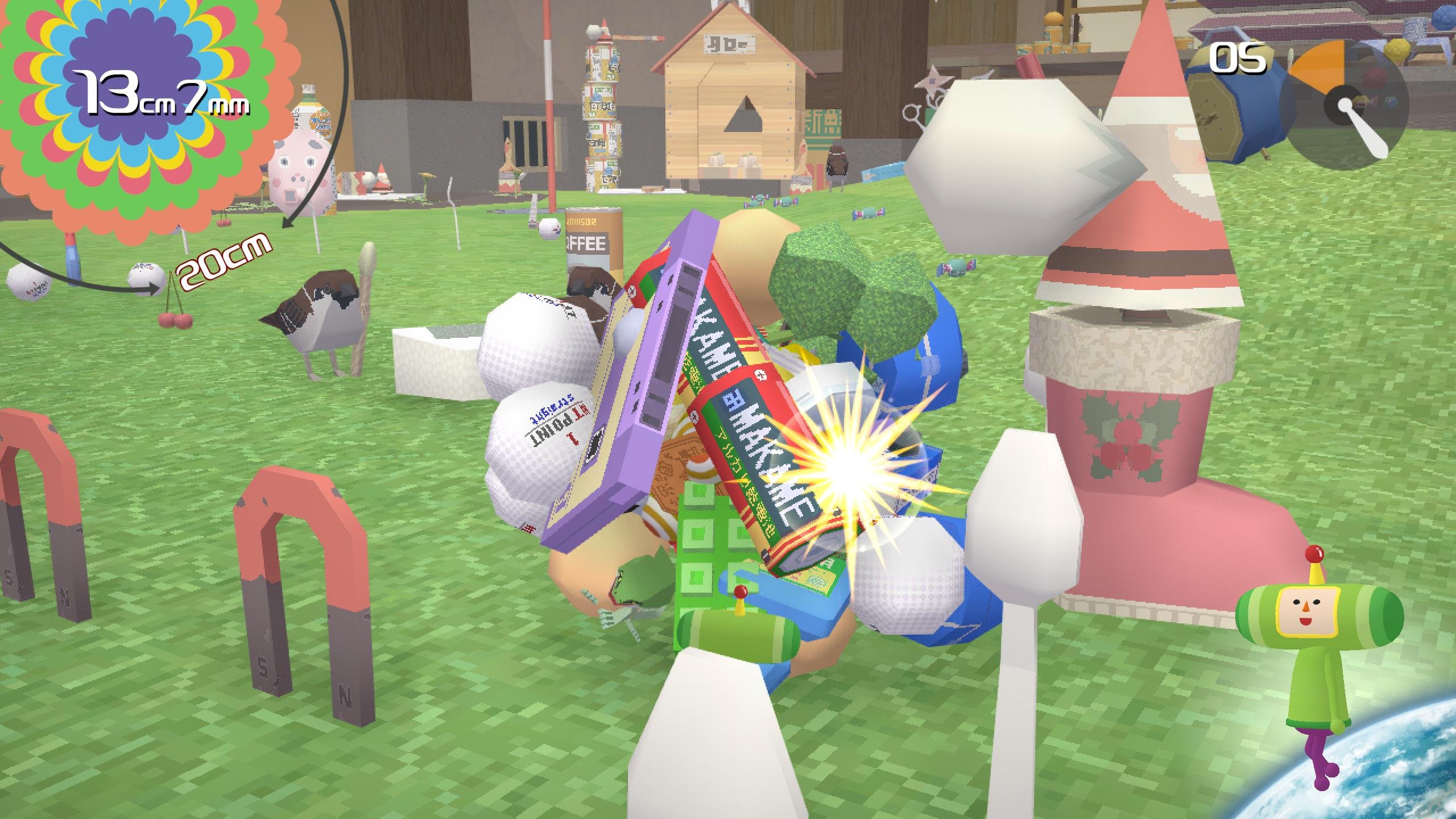 The original game, and this too, has its frustrations. I'm not sure I agree at all with the designers on what size objects should stick to the Katamari - there are some wild discrepancies where you can pick up an entire lamppost, but not a far smaller bin. But this only makes it more satisfying when you can pick up the bin and you pick them up far more defiantly. (The same goes for the obstacles that bounce you away when you're small, and then get scooped up with everything else when you're big. Take THAT, cat prick.)

But for the most part, this remains just a joy to play. It's certainly no challenge, but nor ought it be. It's a toy, a merry toy. It's about progress, about growth, about revenge, and about crushing towns. 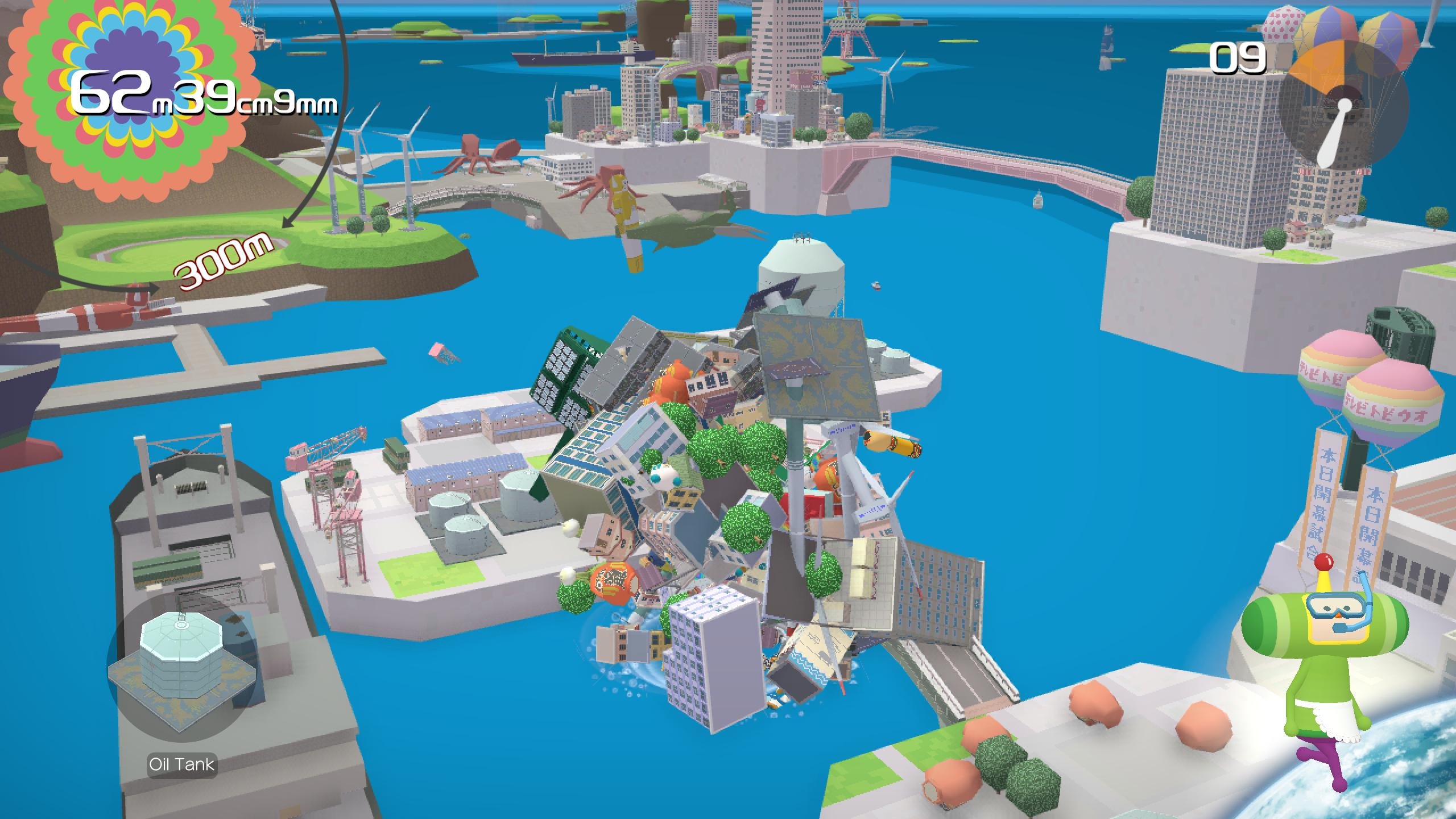 That's perhaps what I find most fascinating and brilliant about Katamari Damacy - that it takes you so quickly from smallest to biggest, from victim to oppressor. At the start of most levels you're vulnerable to even a mouse, a crab, scavenging for pins and berries, anything small enough to stick. Then you're able to catch those mice, but you're still threatened by cats, by cars, by humans, by ships... With each increase in size, that which once threatened you is now yours to threaten. You come from such defenseless, susceptible beginnings, but by the end of any level you're ignoring the screams as you roll up cars, houses, groups of school children, entire cities. Then immediately reduced to victim again as you confront your god-awful cosmic father.

(There's also a level in there that's as creepy today as it was in 2004, in which you're asked to gather as many "maidens" as you can - girls and women - and is super-dooper sexist in its delivery. But I think this was always intended to be about how the King is an insensitive arsehole, as much as it sticks out from the more playful tone of the rest. Still though, it does rather strongly imply he's attracted to infant girls, which is... you know.)

Also it has a brilliant soundtrack! No, but it really does. It's outstanding J-pop, and I never grow tired as tracks loop on longer levels. One of the best soundtracks ever? Certainly a contender. 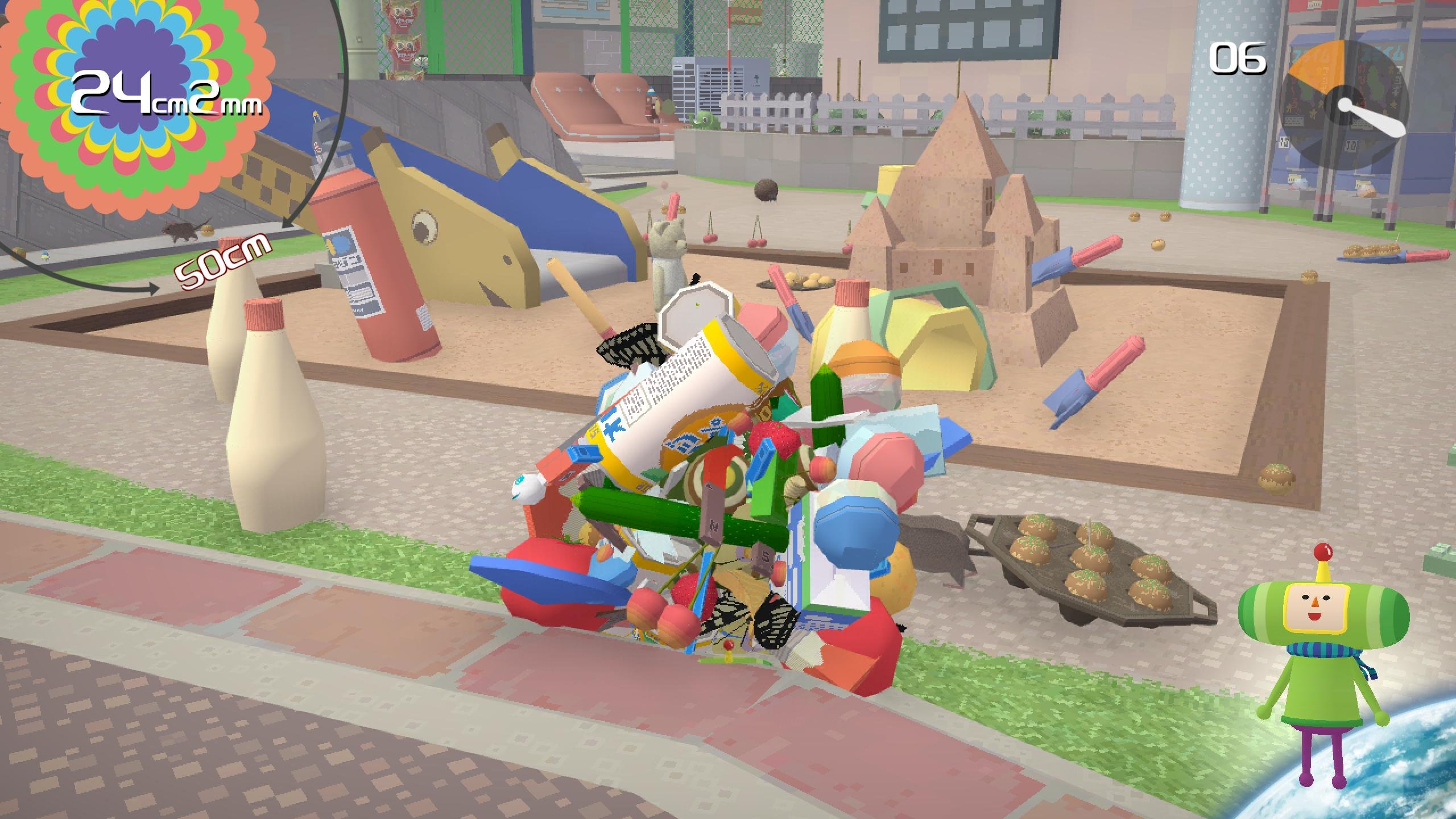 So it would take some effort to find a way to make Katamari Damacy feel irritating, right?! Kudos to Namco for somehow managing this with the PC port, where they've decided to prevent any access to display options until you've gone through the lengthy opening cutscenes, and indeed played and finished the opening level. Until then (and as I played I worried it would always be so), it's in a 1280x760 window, and all the graphics settings are super-low. After this, you can only reach them between levels, on your home planet, by running to the frantically pecking bird. Which is fitting with the general madness, I suppose, but still really very stupid.

It's not the graphical overhaul I think we could have hoped for, either. It's sharper, there's anti-aliasing, at big resolutions, but it's not a ground-up rebuild or anything. The game's so much fun I didn't really mind, but it'd have been lovely to have a proper Katamari Damacy for 2018, especially considering the series has been confined to phones since 2011. 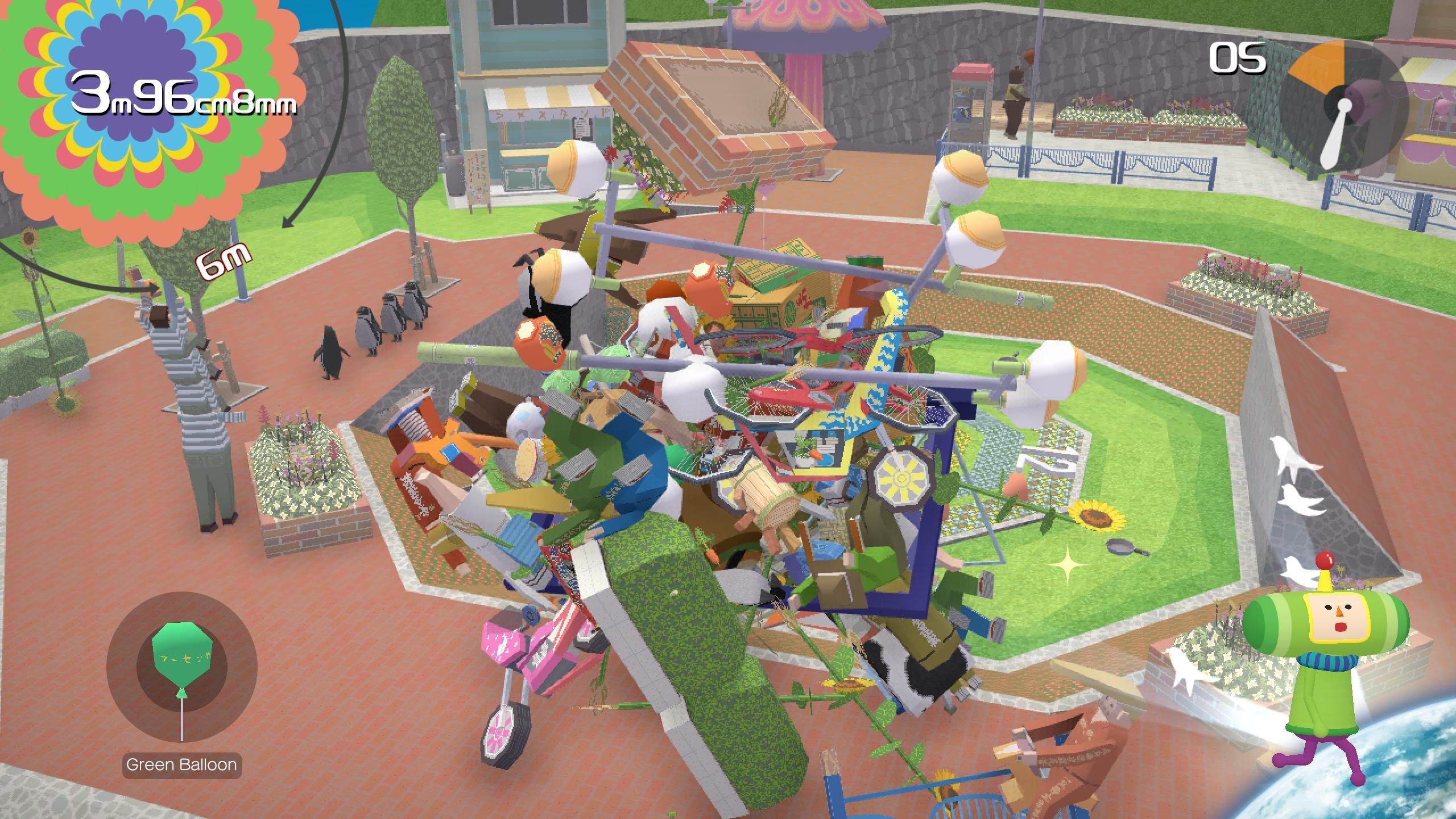 This remains the magical, bizarre, joyful and utterly peculiar game that earned its place in gaming history. It also remains very short (about four hours at a slow pace?), but also extremely replayable, with so many targets to meet. And it's very funny, in a super-dark way.

No price is available as I write, the game out tomorrow, and I think that could make a big difference to how warmly this should be received - set too high and it'll be sad, since there's nothing new here, no exciting bonuses or extra content. Set nice and low and it'll be a splendid chance to relive a classic.