I have been skittering around Outer Wilds like one of those birds who lives on a rhino's back and survives by eating rhino dandruff (I have watched both series of Planet Earth). I haven't been able to sit and play it in big sessions, but I've been picking at it and finding interesting morsels, making a bit more progress each time. I'd be making more progress if I didn't keep going back to the Dark Bramble.

Outer Wilds is an exploration adventure game that's a bit like solving a Rubik's cube except you can only do one or two turns at a time, and after every twist it resets, and also the cube is made of planets. You're the newest member of the space corps of your folksy little race of aliens, and you take to the stars in a ship that looks like it was made by Oscar the Grouch. Every 20 minutes the sun goes supernova and you wake up at the start of the day again, knowing that everyone and everything is going to die. Simple!

There are several adventurers who went before you. One of them was Feldspar - was because when you start the game they've already been missing for years. They were the best. The ace pilot, the most fearless, they'd go anywhere and do anything. Their logs are scattered across every planet you go to. They were the closest your people had to a rockstar. And one day they didn't come back. Sometimes, people say, they think they can still hear their harmonica.

Well you definitely can hear their harmonica, coming from the Dark Bramble. When my scanner picked it up, on my first ever mission, I made a beeline for it. Zoomed straight past the person on the moon. Who cares about the smelly old moon? I could save the hero! I could find Feldspar! You fools, why had nobody gone for them before?

When you approach it, it becomes obvious that the Dark Bramble is an aggressive plant that has grown out from the inside of a planet and destroyed it -- a giant, intergalactic parasite. It looks like if a conker had a bum, and then turned inside out around it, all puckered seeds with spikes and tendrils, looping into each other with a weird interdimensional trick that really shitted me up the first time I visited. But I have been there many times now. 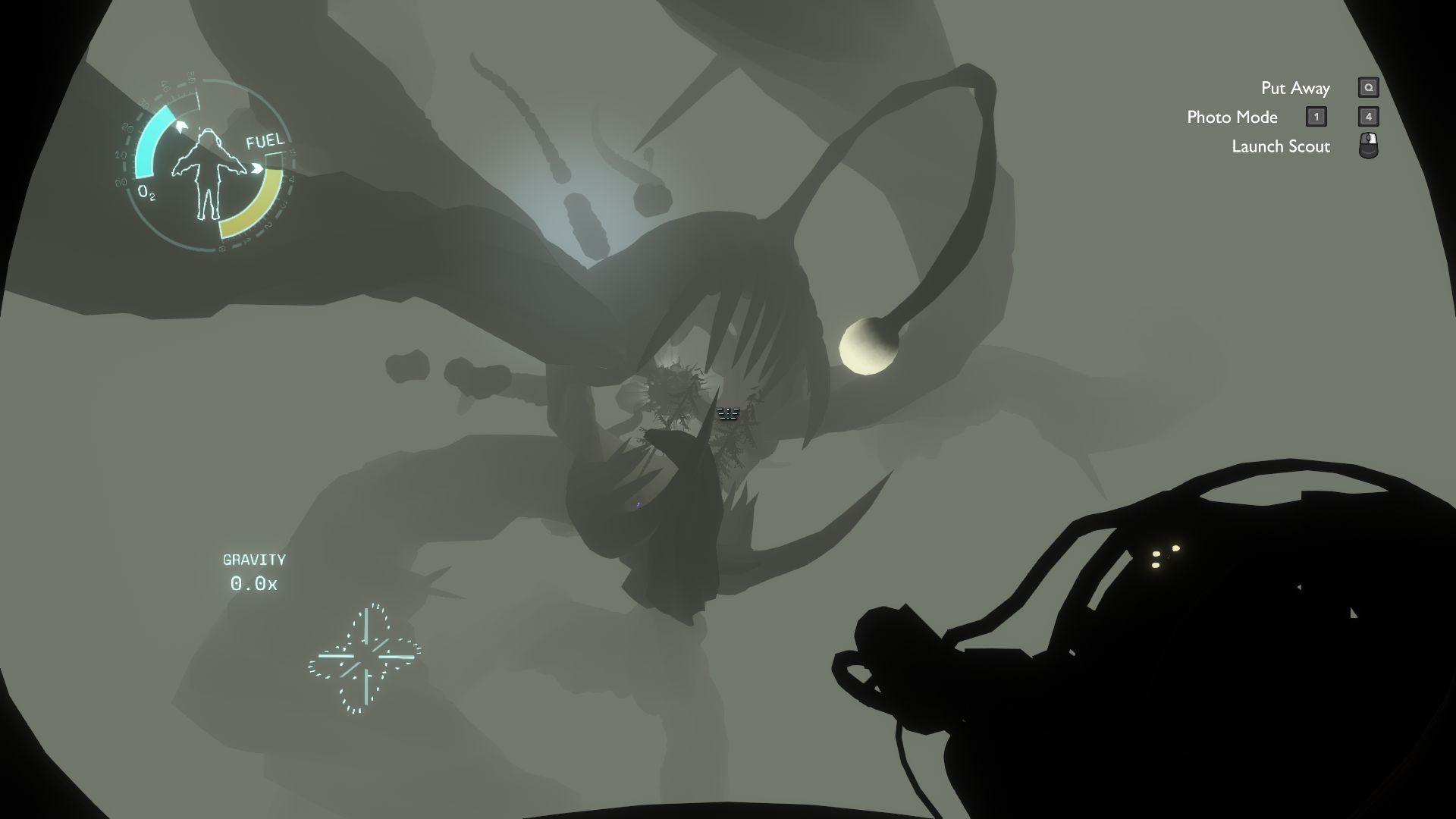 The Bramble is full of twinkly lights that are actually giant angler fish who will eat you if they see you. It also contains one (1) alien astronaut playing their harmonica, living in the skeleton of one of these fish. I won't tell you exactly how to find them because it took me ages to figure it out and it made me really happy when I did. And when I did, there Feldspar was! Sitting by a happy little fire, endlessly playing their song, surrounded by the trees they planted to generate oxygen. I was overjoyed. They were cheerful but detached, and congratulated me on being the second ever Hearthian to reach the Dark Bramble. After themselves, obviously.

What I didn't expect was Feldspar's ambivalence to being rescued. 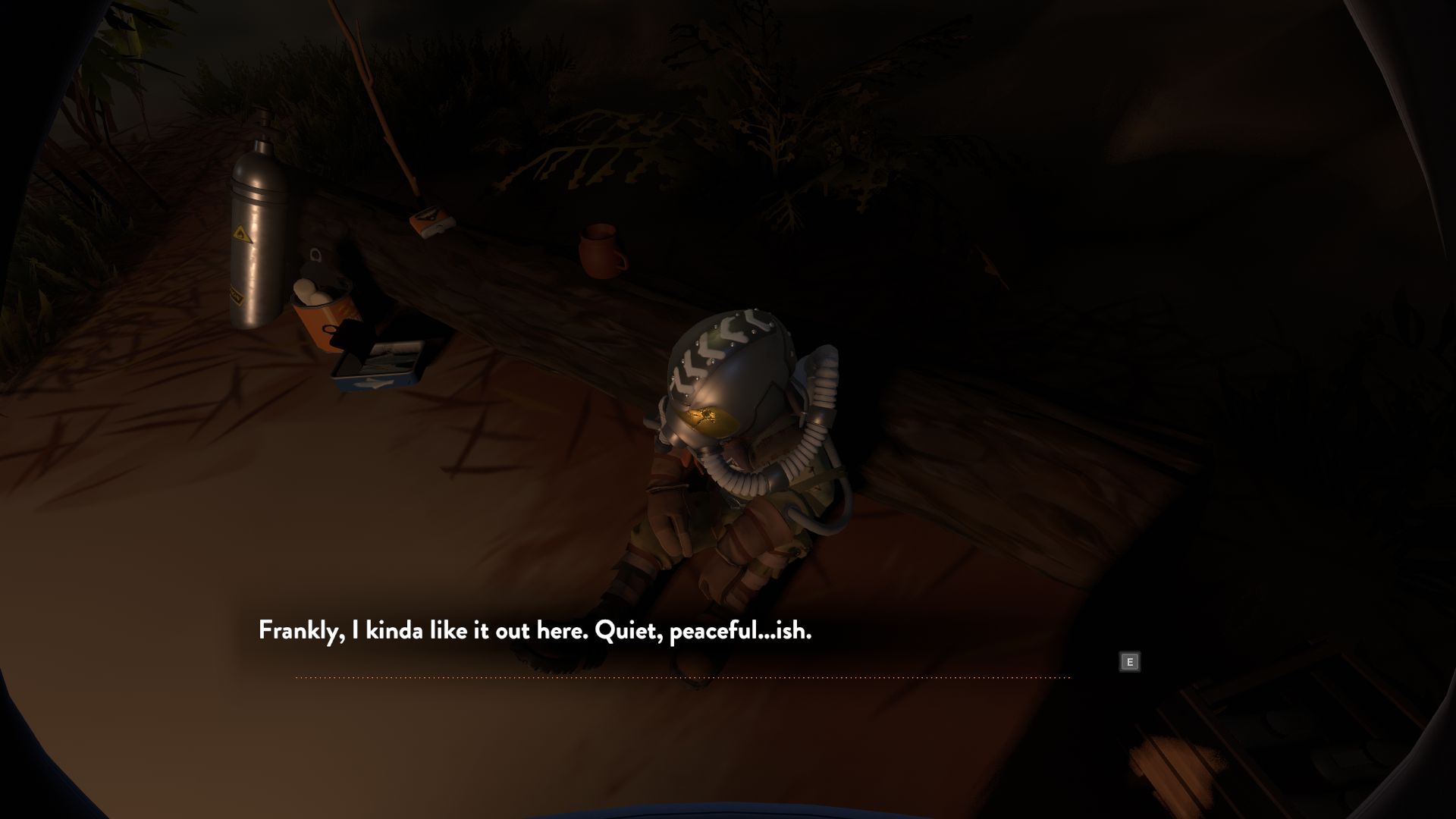 If you offer to call ground control for a rescue, they say, well, yeah, sure, if you want. But they kind of likes it where they are, too. "It's a lot of pressure, being the best that ever was," says Feldspar. "Been nice to have a break."

This was initially upsetting to me. I understood, on a practical level, that there was no way I could ever have saved Feldspar, given that every 20 minutes they'd just reset to being in the middle of the bramble again, but I still wanted to, y'know, feel I had initiated it. That I was the hero. It's okay, Feldspar, you're not the best there ever was anymore! Be grateful, dammit! By being happy with their lot, Feldspar removed my ability to be magnanimous. I later appreciated this as a genius move. I am forever outplayed by Feldspar. 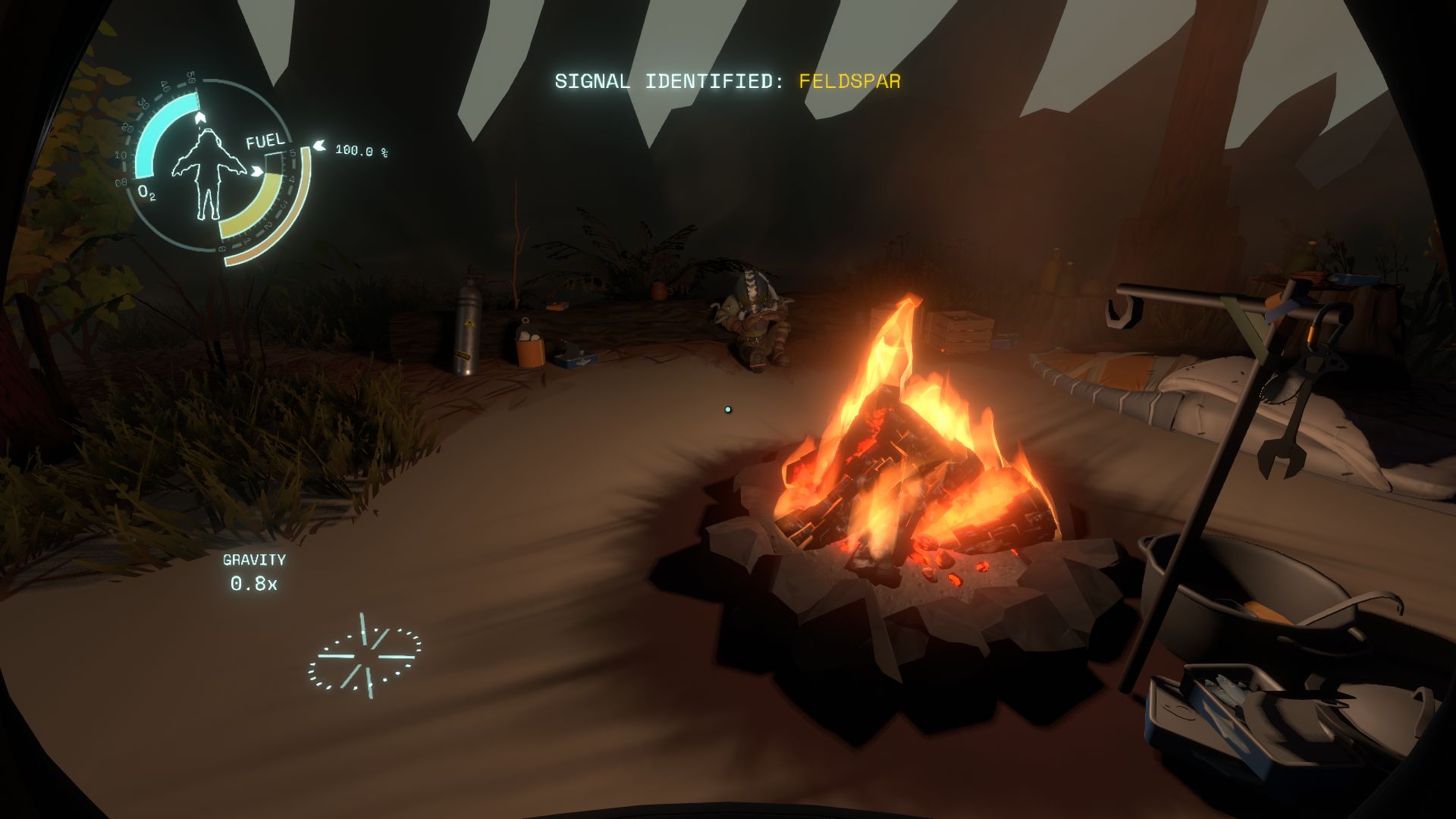 I keep going back to the Dark Bramble, instead of trying to properly figure out the Ember and Ash twin planets, or going to the black hole. More than anyone else I've met in the universe, I keep hoping that Feldspar will snap out of the loop, and next time I arrive they'll remember seeing me before, and greet me like an old friend. They never will, but I expect it of him because they seem like they have everything sorted out. And that's another reason I keep going back. To visit this chill veteran, playing their harmonica, and see them be happy despite the fact they're trapped on an alien planet far from home and haven't seen anyone else for years.

It would be nice to have an option to ask them how. How? But the old astronaut keeps their secrets.