Chores are not supposed to be enjoyable. At home, stacks of unwashed bowls, cups and cutlery flood the sink, with the occasional fly fluttering about in search of a morsel. It’s only when I run out of clean plates that I wearily make my way there, caterwauling as I wash the dishes out of sheer necessity. But when staring at the bloodshed of Serial Cleaner, I can’t help but feel the urge to clean. Everything needs to be spotless and neat. I would even top that vase up with fresh flowers, if the game would let me.

Rather than carry out waves of gratuitous violence, Serial Cleaner gets players to mop up the aftermath of homicides, polishing floors 'til there's a glossy sheen. And there’s always work to be done. The mafia, for instance, is fond of particularly messy jobs, with crime scenes often strewn thick with blood and viscera. As the eponymous cleaner,  you have to drudge through some of the filthiest murder pictures, while slickly dodging the police officers’ line of sight.

Drenched in a varnish of ‘70s retro stylings, from its funky soundtrack to its desaturated colour palette, it’s incredibly aesthetically pleasing. Yet, the moment I step into the crime scenes, its quirky veneer begins to crack, gradually laying bare its ridiculous premise.

To put it bluntly, Serial Cleaner is ludicrous. Even when I’m doing an atrocious job as Bob the Cleaner (I once put on Bruce Lee’s distinctive yellow jumpsuit during a job just because I can) I was able to get away with mistakes because of one simple reason: everyone else is hopelessly dumb. Spotted by an officer? Just sidestep his cone of vision, and he’ll soon give up his search. Chased by five baton-wielding cops? Dive into a potted plant to ward them off—even in plain sight. Want to distract some cops? Turn on the radio to attract their attention, and they’ll stare at the offending object for a few minutes before walking off, grousing unintelligibly about something, which I would like to think is about the pitter-pattering of rats. In this universe, object permanence is a concept too inscrutable for most people to comprehend. 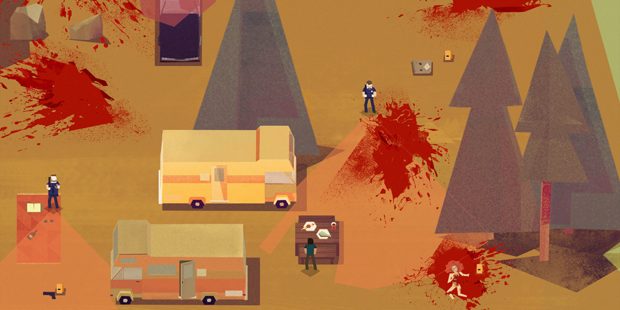 But despite this silliness, it’s a hilarious romp. Leaving a crime scene cleaner than it was even before the murder would have been impossible in reality, even in the presence of officers the likes of Llyod and Harry in Dumb and Dumber. So why bother with making sense out of it all? Delving into its silliness and embracing the tedium can be fun, once you throw all troublesome notions of logic out of the window.

There’s a farcical satisfaction to cleaning up buckets of blood right as a copper’s back is turned, only for him to turn around and completely oversee that his surroundings are gleaming with the lustre of well-polished floors. Or racing to that one speck of dirt at the other end of the crime scene, just to feed my compulsion of leaving the place completely unblemished. I could drive off in my red convertible and complete the level, but it’s more tempting to risk my hard-earned victory instead. After all, if I’m not going to clean that final stain up, I doubt anyone else would. And if I fail, I could always clean everything again. That’s a lot more fun than washing dishes in real life.