We easily take the stars for granted. The starry sky is something we can see every night, and while the starscape changes with the seasons, an untrained eye wouldn’t know the difference. While we think nothing of looking up at the stars and the moon at night, in another reality it would be impossible.

In Planetarian: The Reverie Of A Little Planet, Earth is plunged into a global war that kills most of humanity. Dangerous man-made ‘Gods of Death’ still roam the land, killing anyone that stumbles into their path. A corrosive acid rain falls across the planet, drowning plants, rusting metal, and hiding the sky. The scant few remains of humanity struggle to survive the aftermath of a war they didn’t start. 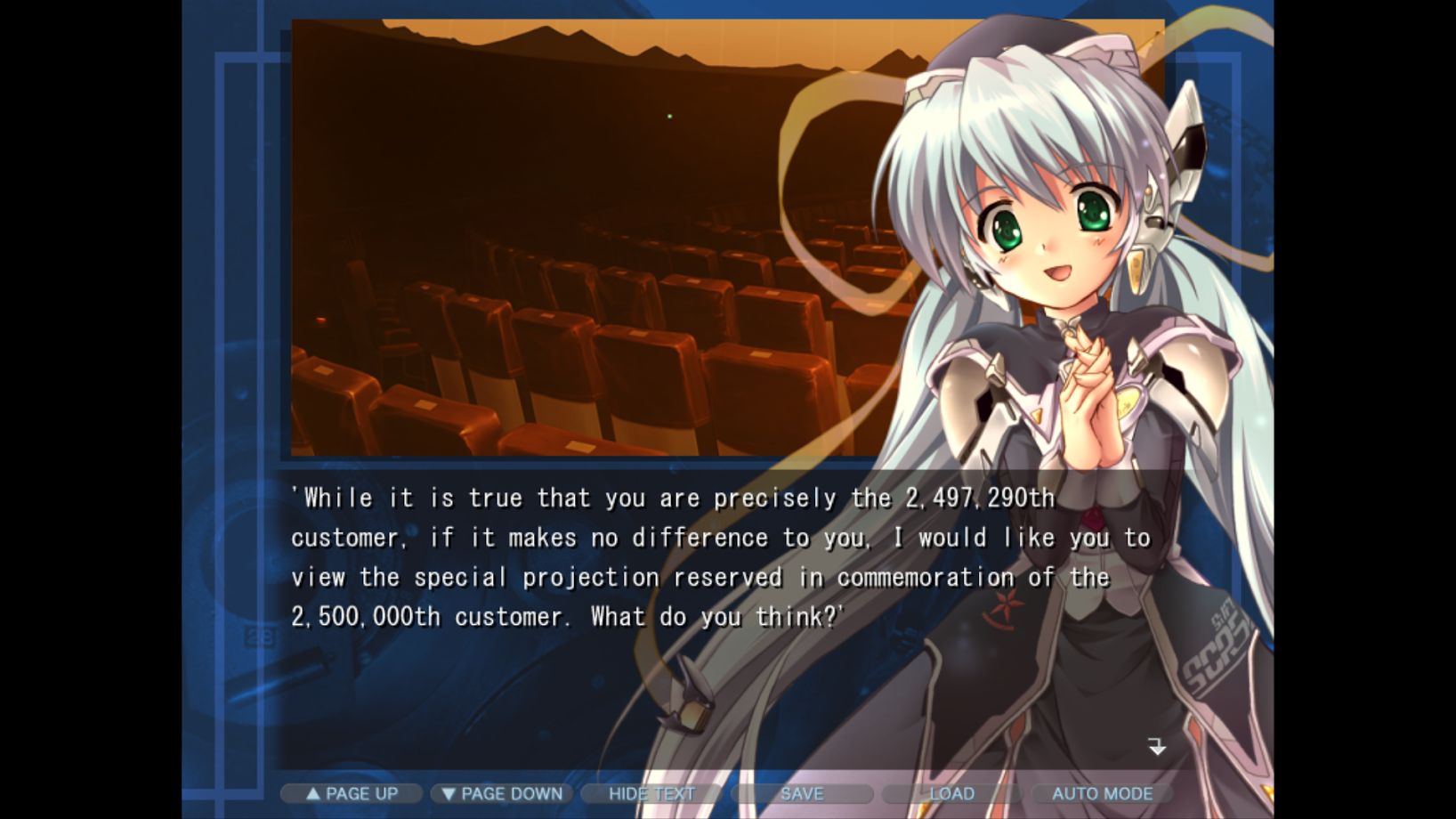 Planetarian begins about 30 years after The War ravaged the world. The character the player controls, simply called The Junker, enters a dangerous former city in search of medicine and lost technology to trade. While evading some deadly machines, he runs into a building with a strange dome on top, thinking it was a military facility. What he finds instead is a cheerful robot girl, welcoming him to the broken-down planetarium.

Inexplicably, The Junker decides to help Yumemi repair the planetarium’s grease-covered projector. The reason he decides to stick around and help even when his rations run low allude even him -- maybe it’s Yumemi’s infectious cheerfulness, or a curiosity to see if this strange machine can really show the stars. But whatever the reason, The Junker stops thinking only of survival, and eventually gets the machine to a semi-working state. 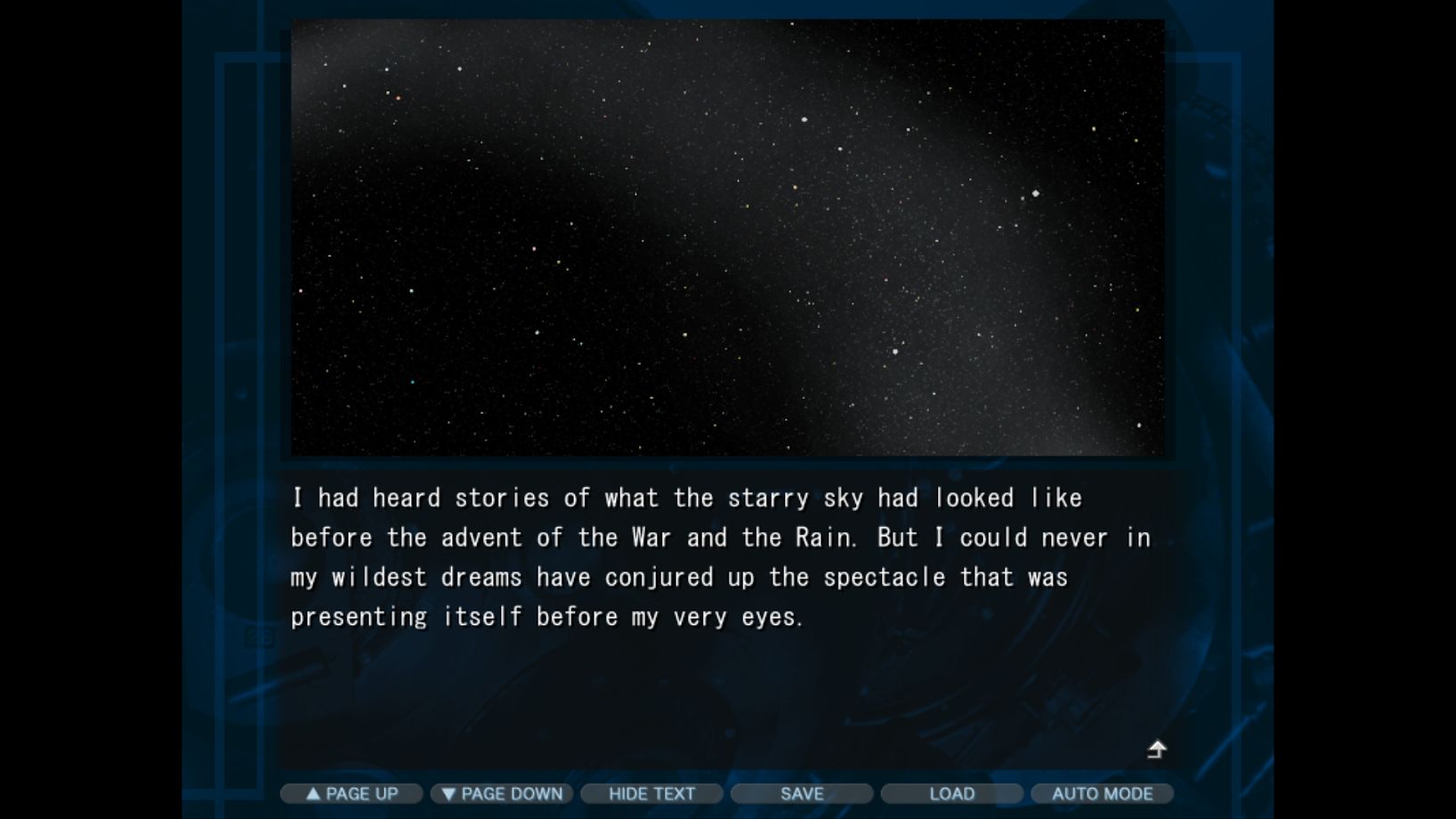 Yumemi begins her presentation, and as the projector whirls to life, The Junker sees the night sky for the first time. For as long as he could remember, the sky was covered by the dark clouds, obscuring it all and making it difficult to even tell the difference between night and day. The beauty of the night sky is completely foreign to him, and as Yumemi points out the constellations, The Junker becomes completely enraptured.

Planetarian does well to build up to this moment, portraying a world that has lost its natural beauty. Humanity lost almost all its knowledge on anything that wasn’t directly related to survival -- a point that comes in strongly when Yumemi speaks about the ancient pantheon of Gods, and the Junker recognises some of the names only from post-apocalyptic shelters that were long destroyed. 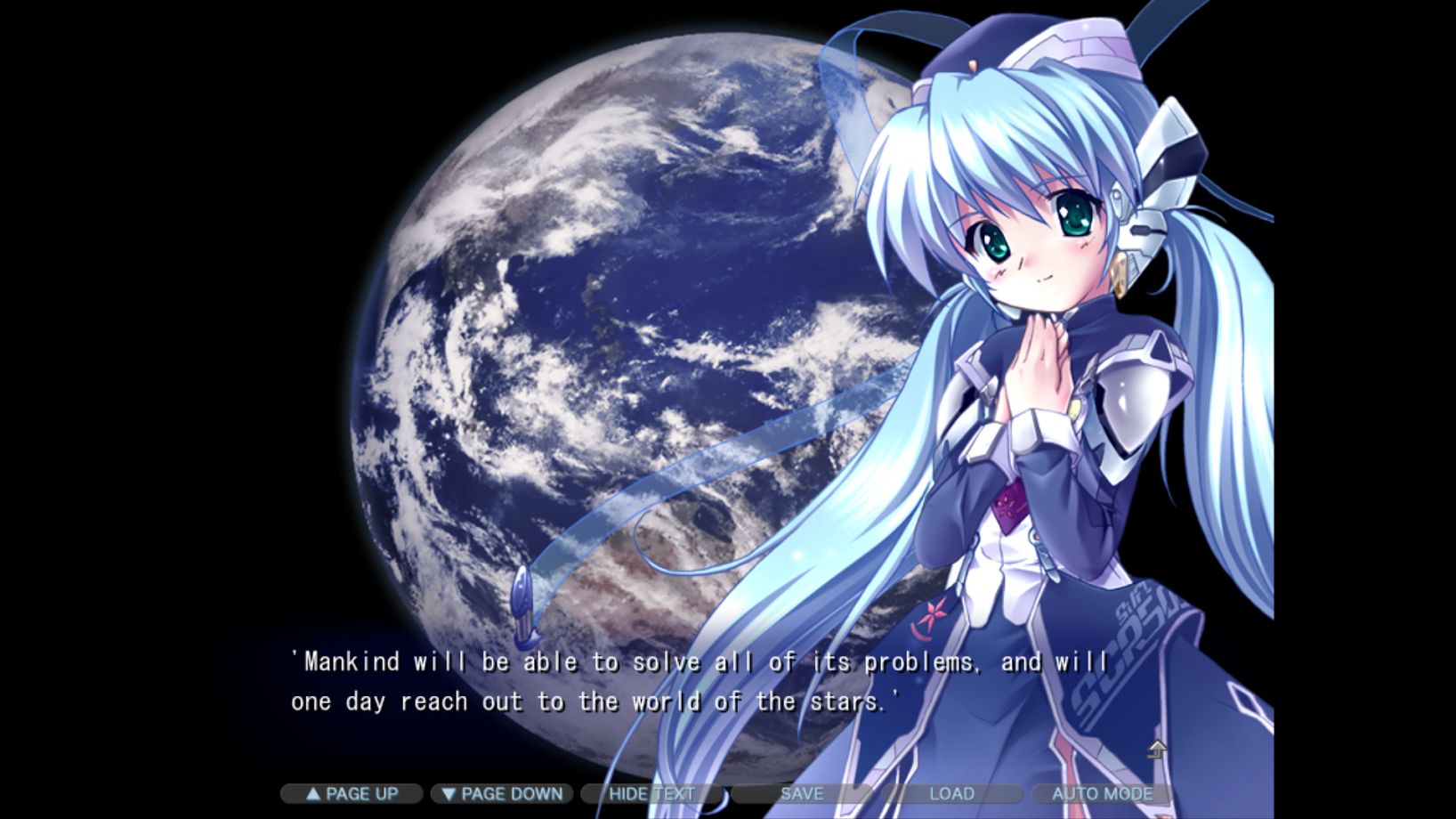 But even in this dying, desolate world, The Junker is able to find the beauty of the night sky. It’s a bittersweet moment, as he’ll never be able to show anyone else this sight. The planetarium is in the middle of a dead city, with Gods of Death patrolling the area. The power also gives out in the middle of Yumemi’s presentation, sealing the planetarium’s fate.

The planetarium’s final presentation now complete, there is nothing left for The Junker to do but leave the city behind. But he takes with him precious memories of a starry night sky and the ever-cheerful robot that revealed to him such beauty.