At last we come to the final door of the RPS Advent Calendar. Behind this is our game of the year, and you know what? It's been a tough journey to get here. We've been through several different realms. Many beasts and several family friends have attacked us. Our dad has been weirdly unsupportive about the whole thing. But you know what? It feels like there's a real boon waiting behind door 24...

Imogen: This time last year I was snuggled up on my at my parents house, blasting out runs of Hades while it was still in early access. It's mad to think that back then this gorgeous mythological roguelike wasn't even finished. Each run I completed was met with snarky jokes about Zagreus' fate, and how I'd have to wait just a little bit longer to find out the rest of his story… Then it hit its 1.0 release this summer, I found what Zag was looking for, and it made me a bit teary.

I don't think a roguelike has ever gotten me so emotionally invested. Zagreus is such a lovely boy with one goal: escape from hell. But his journey becomes intertwined with the journeys of so many others, there's just so much more feeling in it than I could've imagined. It inspires so much determination to complete every run - not just to find out more about this mysterious ending Supergiant has you chasing for so long, but to absorb yourself in every aspect of the world they've created.

Hades' ability to continue to surprise and encourage is unlike any roguelike I've played.

Even now, long after I've finished the main storyline, I can't stop playing it. Hades is never-ending in the most wonderful way: there's somehow still so much more to hear from all my chthonic pals. I feel personally attacked when Eurydice doesn't invite me in for a bite to eat in Asphodel; or when my husband, Death Incarnate, doesn't drop by Tartarus to help me beat up some wretches.

I think the little stories you come across in Hades are so compelling because the storytelling is baked into the gameplay, in a way I don't think many games do. My favourite example of this is one of Hades' boss fights. After tons of runs, these particular bosses started to change their tone during their pre-brawl banter. I didn't think much of it at the time, until a few runs later it became clear they'd resolved their character arc and their move set permanently changed to reflect it. And they killed me almost immediately! I was so used to their old sequences that it properly caught me off guard. Naturally, I jumped straight back in to find and fight them again.

Hades' ability to continue to surprise and encourage is unlike any roguelike I've played. Even when you fail runs you're rewarded with fun exchanges between brilliant characters back in your underworld mansion. Hades makes failure fun and success so incredibly inspiring. Please, play this game. 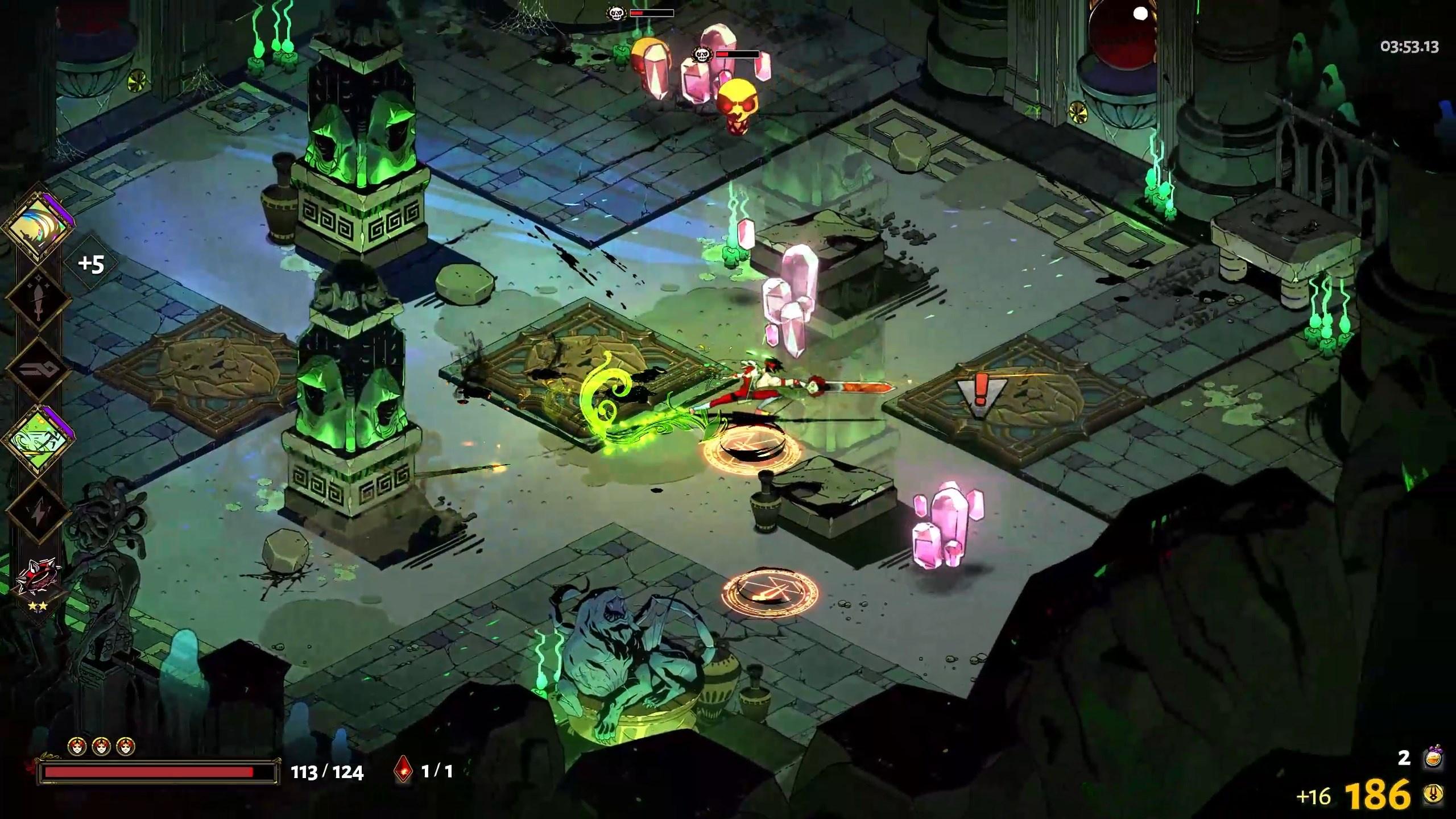 Ed: I like Hades because I like running through doors that’ll grant me loot, into rooms that’ll likely grant me more loot. I’m a big fan of Binding Of Isaac, because it too largely involves slaying things in a room, choosing a door, then hoping that the door you’ve picked has loot on the other side of it. I am a glutton for powerups.

Hades is very good at making you feel powerful too. As you progress through a run you are visited by these Olympian gods who’ll be like "You could use some lightning to go with that shield, couldn’t you?", and I’ll gladly take them up on the offer, but not before sliding in a awkward, very well spoken "mate" to seal the deal. I genuinely can’t shake the feeling that the character you play, Zagreus, is basically Robert Pattinson.

Eventually you’ll be dashing and slicing all the over place with loads of powers that play off each other.

Eventually you’ll be dashing and slicing all the over place with loads of powers that play off each other. One of my best runs was with a big sword, and I had this thing where I’d inflict enemies with a stack of Doom every time I landed a hit, so after a short delay all these stacks would gather, and just plop like a mini-nuke on any nasties I slashed.

I also respect the fact Hades isn’t crushingly difficult and isn’t afraid to give you a little treat for your efforts. That wonder run with the sword ended eventually, but instead of sobbing into my blanky afterwards, I felt a solid sense of achievement. I could go back to my cosy hub world and give friends prezzies I’d found on my run, or spend currency on items, or even test out a new spear I’d unlocked. Cor, so many options!

I’ve found Hades to be super moreish, sowing that “just one more” sentiment into my brain, even as my eyes threaten to collapse. I reckon this is because it’s a rogue-like that’s excited to see you push forwards, as opposed to rooting for your demise. 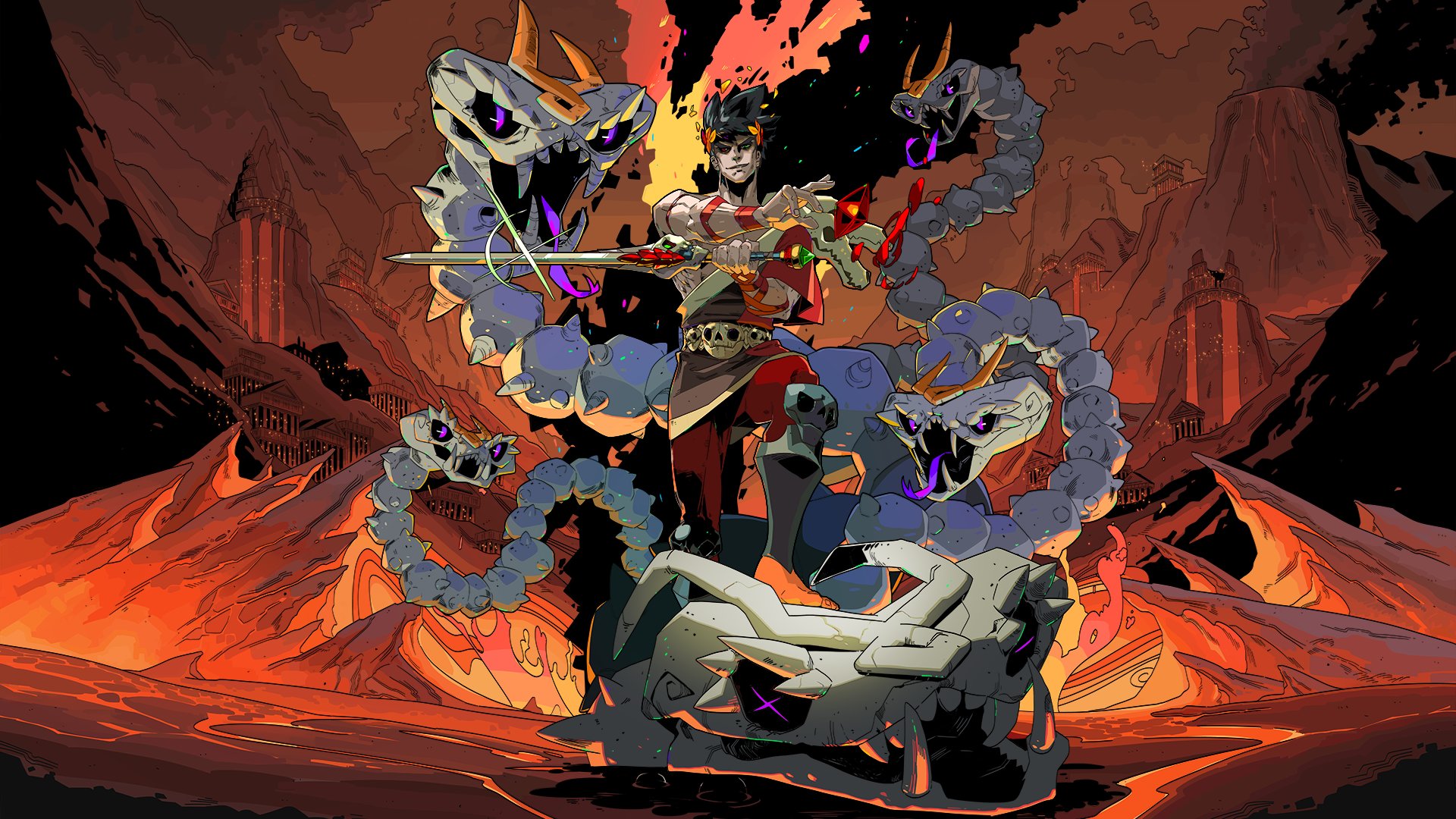 Alice Bee: I think my favourite thing about Hades (aside from it being literally the only good roguelike game ever) is that everyone who plays it has their favourite god from among the pantheon. Like Ed says, they all offer you slightly different boons, and consequently everyone has their own preferred combinations to stack, to get the right attacks or passive abilities for that primo run through the underworld.

So, you end up with a couple of favourite gods that you end up praying will turn up early and repeatedly in your run, and a couple of others that you don't mind but aren't your best. I'm an Artemis/Poseidon girl these days, but I mean, I won't say no to Ares or Apollo.

It is in this way that Supergiant have managed to make us all worshippers of the Ancient Greek gods once more, in a way that I imagine people actually were in the past. Because we're all like "Yes, thank you Artemis, give me that sweet crit stacking damage!" but equally, because runs can make or break on a single roll of the infernal dice, we are just as much hoping to not run into certain gods. "Please, please no Dionysus or - oh fucking hell, it's Zeus, ugh." Can't tell me someone in Ancient Athens never said basically that exact sentence before. Time is a circle. 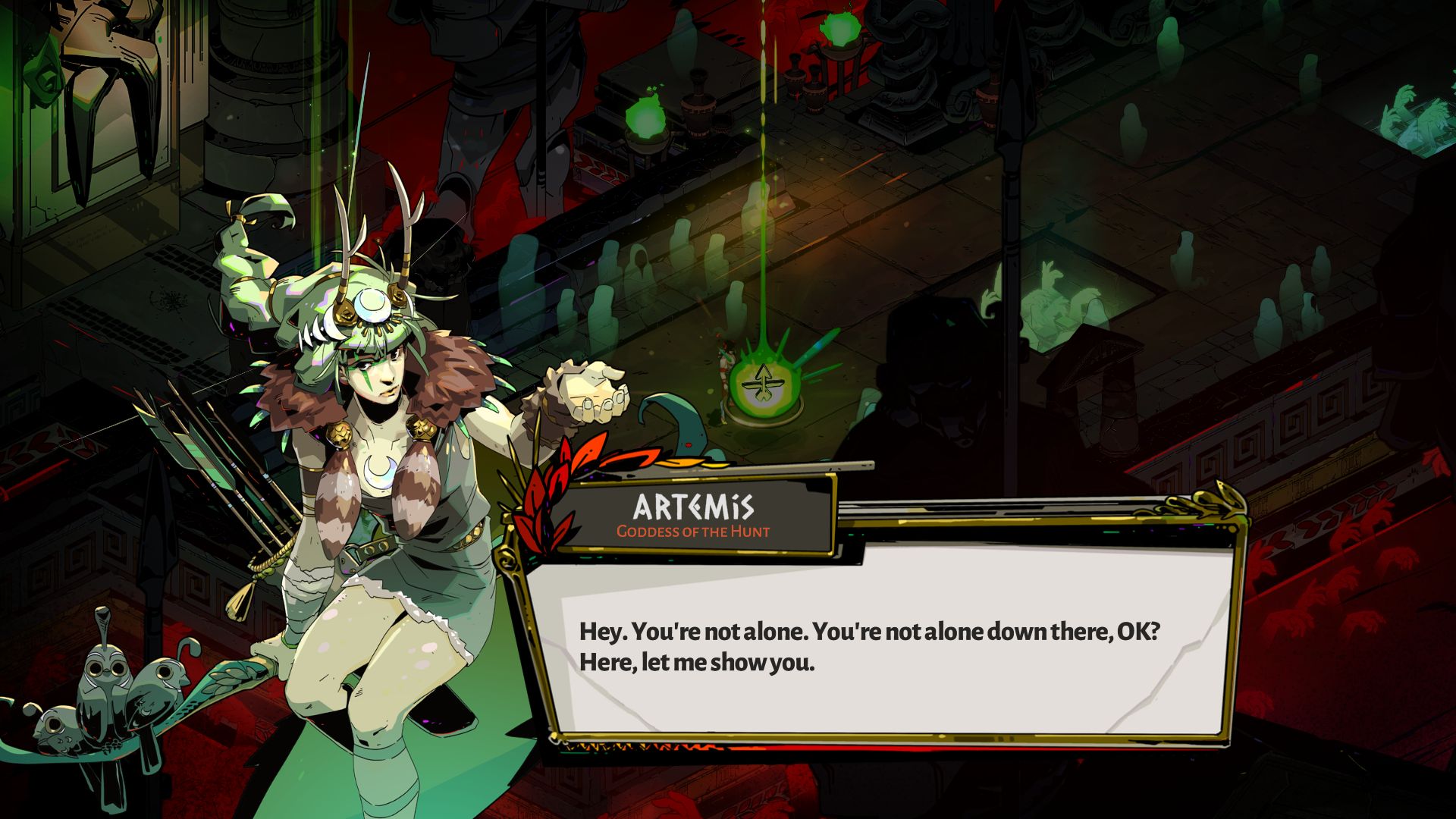 James: What can I say about Hades? Every time I think I’m done with it, the game keeps pulling me back in. Please stop reading this and play it if you haven’t already - even the most intensely anti-roguelike folks I know have come around to the genre after Supergiant’s stunning effort this year.

When I play games, as the absolute content-hound I am, I naturally seek out screenshotable moments. Those lines of dialogue you can send to a friend and say "haha that’s something you’d say", or a beautiful bit of landscape, as well as everything in between. Well, Hades is absolutely stuffed with those moments. From the flirtatious chats with Meg to Achilles’ entertaining glossary in the Codex, to the hand-draw vista looking out on to the plains of Elysium, save a bit of disk space. You’ll be hitting that PRT SCR button pretty often.

"Despite everything, if I had to recommend one single game 2020 has offered, it’s got to be Hades."

Screenshotable moments do not a game make, though. Hades has all the rest, too. The game is just sitting there with a giant array of characters, none of whom I’ll be forgetting in a hurry, some great tunes to keep propelling you through the depths of the Underworld, and some of the sharpest, most responsive action I’ve ever experienced.

The way the narrative expands over several runs is something I haven’t seen before either, and it’s extremely impressive how every single line of dialogue (all excellently voiced, too) feels relevant to your current situation. I still haven’t heard a chat repeated, and even though you have to complete several runs to get the ‘full’ story, it doesn’t feel like a chore thanks to the sweet variety of weapons to choose from, as well as the options to up the ante and make things tougher on yourself.

If you can, treat yourself this Christmas. Despite everything, if I had to recommend one single game 2020 has offered, it’s got to be Hades. Supergiant have completely smashed it with Hades, and I doubt I’ll uncover everything this game has to offer for a long ol’ time. 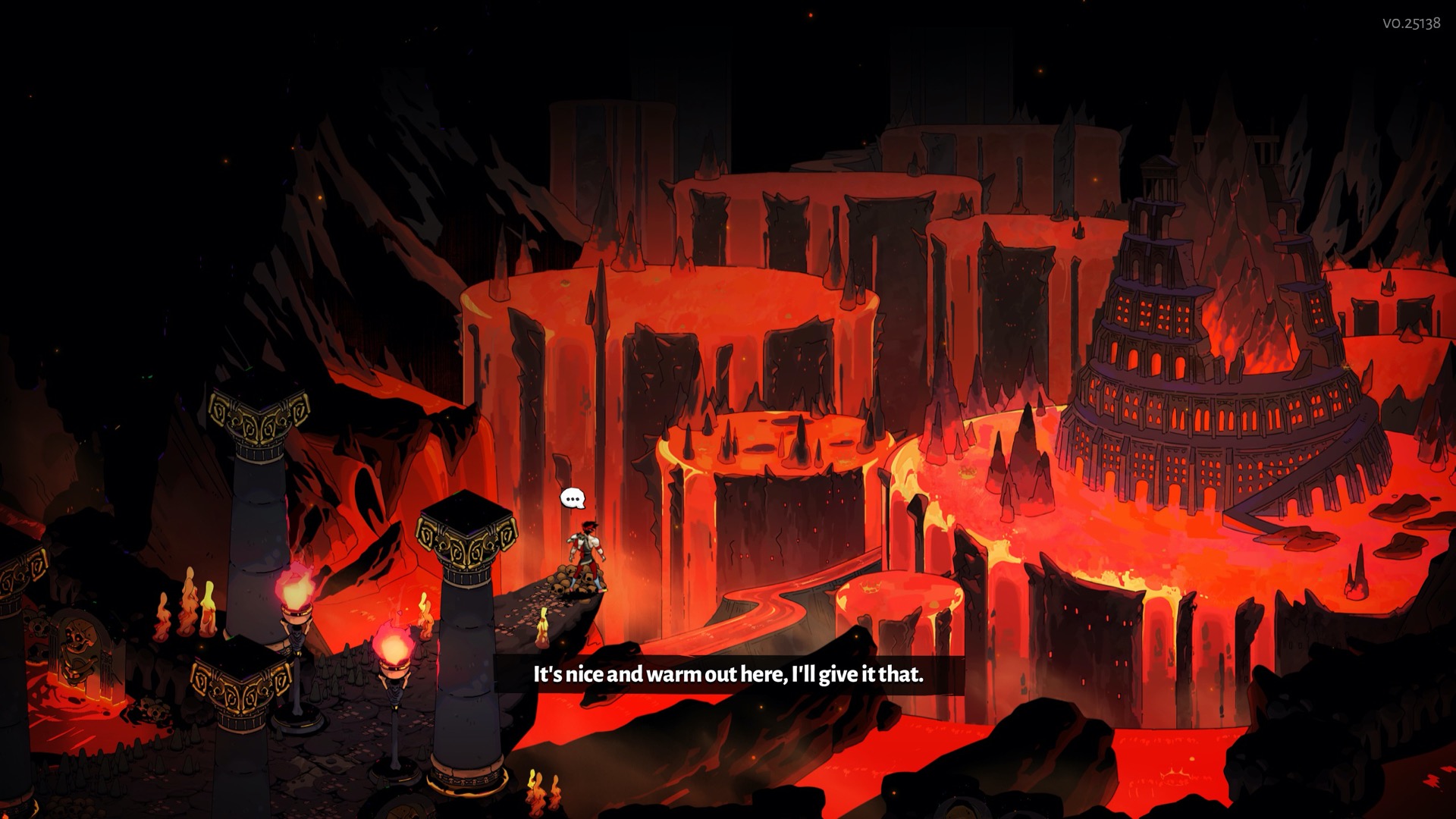 Ollie: Supergiant Games have played a large part in my career writing about games. I wrote my undergraduate dissertation on Bastion and Transistor, for one thing. And I'd only been working at RPS for three days when Hades was announced (and simultaneously released in Early Access) at the 2018 Game Awards, so I've been able to watch it grow while I've grown in the role. It's such a pleasure whenever I get to write about a Supergiant game.

Hades lacks the emotional narrative punch of Supergiant's other games, and yet at the same time I can't see it as anything except their finest writing to date. Before Hades, I couldn't even imagine how you could build an effective story within the framework of a roguelike with permadeath and meta-progression. Supergiant have always done incredible work marrying mechanics with narrative in a way that elevates both, but Hades is their magnum opus.

Even without any story at all, I'd still be hard-pressed to put Hades down. It's an incredibly beautiful, polished, satisfying experience, and it ticks all the boxes of what I look for in a roguelike. But it's thanks to the story that I feel I can never be fully satisfied by another roguelike anymore. I want those lighter moments where you converse with characters and learn about their motives and troubles. I want it to make sense that I keep dying and returning to the start. I want to learn about the personalities behind each boss fight each time I encounter them. Hades has spoilt me something fierce.